The Healing Hands of Mahlon Locke 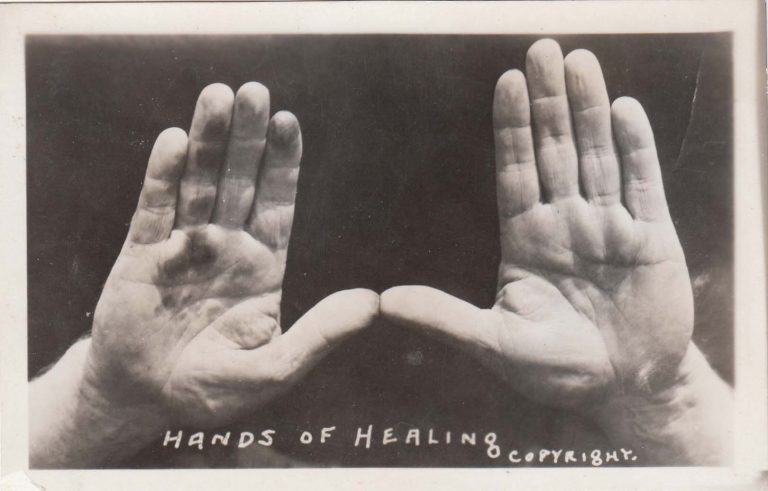 Mahlon William Locke was born on February 14, 1880 in Matilda Township near the St. Lawrence River south of Ottawa, the capital city of Canada. This part of Canada was largely agricultural —  in fact, the world-famed McIntosh Red Apple was discovered and developed in this area by John McIntosh and his son Allan. John was Mahlon Locke’s great-grandfather.

Locke attended medical school at Queen’s University in Kingston, Ontario. In his free time Locke, with his rural experience and abundance of energy and brawn, worked on local farms, earning one dollar a day for pitching hay and grain in the fields. Graduating in the Spring of 1905, the now-Dr. Locke was engaged as an associate by Dr. George Collison in nearby Brinston’s Corners. Unfortunately, people always requested the “senior” doctor so, after one year, Locke decided to try it on his own in Sault Ste. Marie, a town in northern Ontario at the convergence of the Huron and Superior Great Lakes. An old college pal, Dr. M. E. (Grim) Grimshow, was also working in the area as a mine doctor. Within a year they decided to go to Great Britain to upgrade their medical credentials.

At first they enrolled in a prominent medical college in London, but soon they registered at the Royal College of Physicians and Surgeons in Edinburgh. It was here that Dr. Locke received his insight about foot treatment for the remedying of certain human ailments. Upon competition of his studies in Edinburgh, Locke returned to Canada and opened his own office on June 1, 1908, in Williamsburg, Ontario, south of Ottawa on the Canadian side of the St. Lawrence River.

Dr. Locke’s personal energy soon led him develop another occupation — as a farmer, on 100 acres he purchased in 1913. His two-year old Holstein heifer actually established a world record at one time — 101½ pounds of milk in one day! Soon local folks were calling him the “Hoof Doctor.”

Around 1925, Dr. Locke’s unique and effective foot treatments began to attract interest and patients started to come from further and further away. 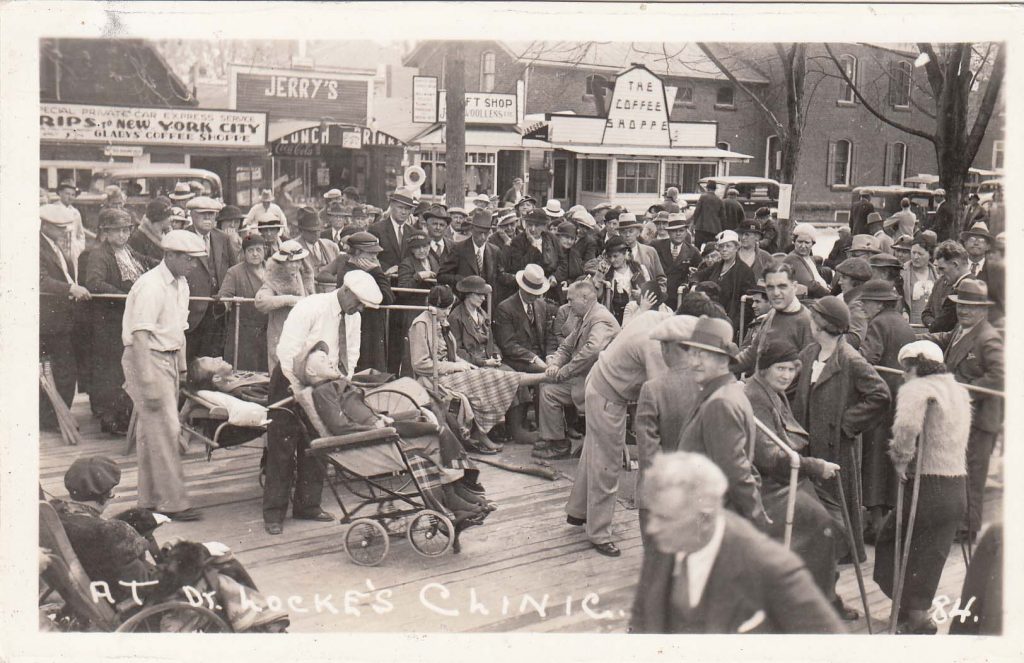 An American writer, Rex Beach, author of two dozen popular biographies, first heard about the “hoof doctor” while on a golfing vacation in Ottawa. Beach’s aching feet prompted him to follow a friend’s suggestion that he see Dr. Locke. After only five treatments, Beach became a convert. His August, 1932 article about Locke in Cosmopolitan Magazine was the first major publicity about the doctor and soon Williamsburg was being elevated to a sort of Canadian Lourdes. Beach went on to publish an entire book, The Hands of Dr. Locke, with New York’s Farrar and Rinehart in 1934.

Beach reported that “Locke diagnosed the trouble in a few words, then gave the foot a protracted twist. The patient would grunt and then laugh in surprise. The manipulation was over in about 20 seconds. Then the chair would swivel to the next patient.” 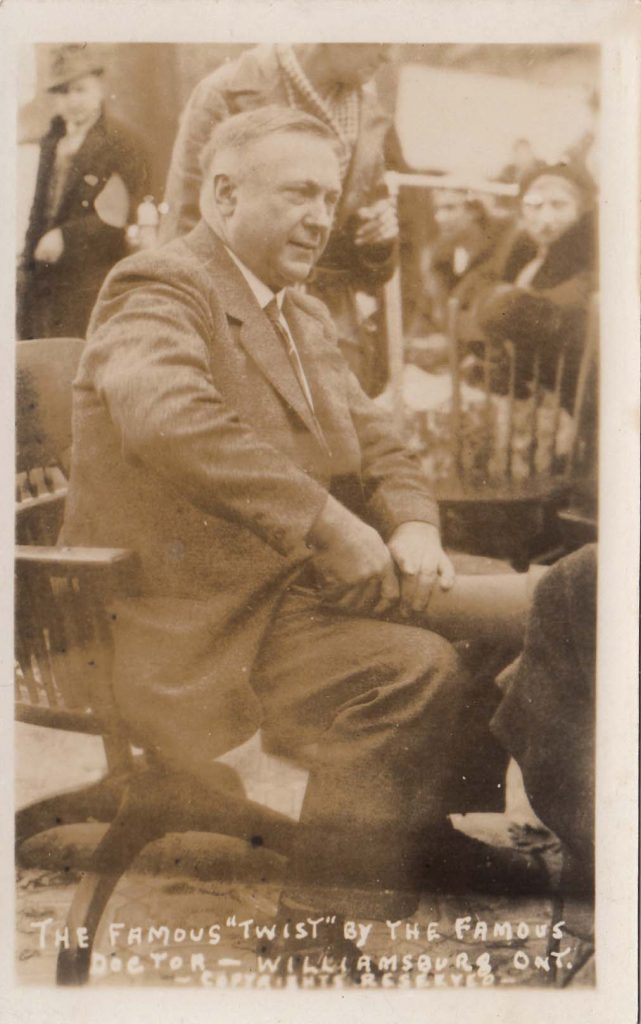 Additional publicity came in June, 1933, when J. Smyth Carter published Dr. M. W. Locke and the Williamsburg Scene. Carter wrote that he asked Dr. Locke to tell him in definite form the purpose and plan of the treatment. “it’s all very simple,” said Locke. “People come here suffering from fallen arches, which cause arthritis and other ills. I put the arches back in place, thus relieving the pressure on the posterior fibial nerve. Nature restores the balance.”

Carter reported that the cost of treatment was $1 with one or two treatments performed on each patient in a day. Dr. Locke worked out-of-doors behind his home, seated in a swivel chair which he rotated from patient to patient who waited in an eight-chuted star-shaped corral. After his treatment, Locke’s staff would whisk the patient into the office for massages and other therapies. By this method, Locke was reported to be able to see thousands of patients a week.

In the late 1930s, Locke built the 70-room Locketon Lodge. The message on this 1938 card to the right states that “Doctor is giving 2 treatments a day. Has about 300 patients.” Dr. Locke’s unorthodox methods did not go unchallenged by the medical establishment. An editorial in the Journal of the American Medical Association in October 13, 1934 titled “Mahlon Locke Foot Twister Extraordinary,” referred to him as 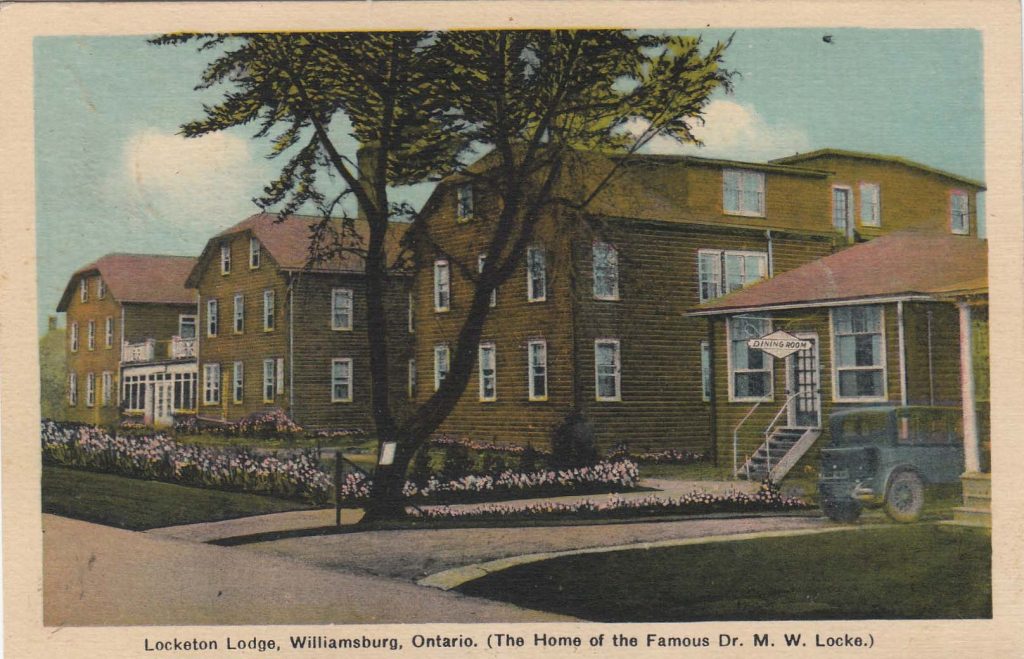 “Canada’s newest contribution to faith healing” and complained that “the profits to be derived from the sale of shoes to persons suffering with chronic diseases affecting the bones and joints has induced many a department store to add a Locke department to its shoe section.” Some have suggested that this and other American-based criticism was aimed at stopping the flow of patients from American physicians and the resultant loss of fees.

Mahlon Locke died on February 7, 1942, of a stroke. A large bronze plaque erected in front of his home by the Archaeological and Historic Sites Board of Ontario commemorates his work and concludes with the following words: “During the depression years, this enormous influx brought prosperity to the region.”

On April 18, 1988, I had the privilege of visiting 93-year-old Blanche M. Gauer Locke, widow of Dr. Locke. His office in the family home was enshrined with many of his belongings, including his famous swivel chair used as he treated patients in his spoke-like spiral outdoor clinic.

Cards from the personal collection of Bob Atkinson.

I wonder if what Dr. Locke was practicing was a form of foot reflexology?

As a Doctor of Chiropractic familiar with Reflexology, I would say “No”
He was doing bony manipulation.