Being a bird charmer is not a unique profession, but if you live in Paris, there is a much greater chance that you could actually make a living charming mankind’s feathered friends. 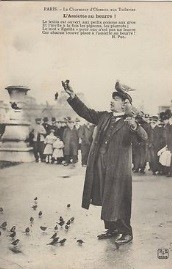 In the media of the last 150 years, chronicling bird charmers has become a routine assignment for reporters and society editors. An early mention of a bird charmer came in the May, 1876 issue of Ballou’s Monthly Magazine (published by Thomas & Talbot, Boston, Massachusetts) when the Paris correspondent to the Philadelphia Telegraph reported that he has seen a woman in the Tuileries Gardens who had attracted hundreds of sparrows to fly about her, alluring them with nothing but crumbs of bread.

The woman was described as being “about thirty years of age, pale, and with dark hair, dressed in mourning clothes, but wearing no bonnet.” 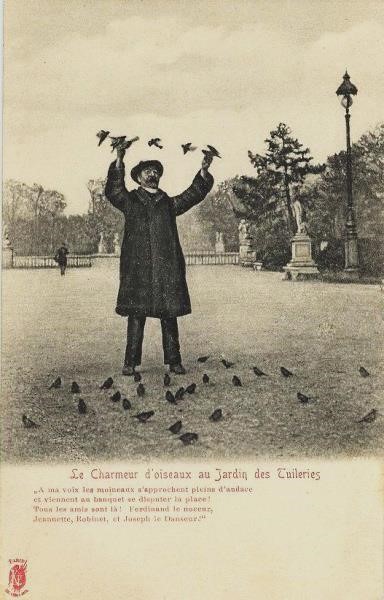 Many publications such as Century Path Magazine, The Illustrated London Times, and others carried articles about bird charmers throughout the first decade of the twentieth century. Then in the January 1911 Le Petit Journal (see cover illustration left) featured the most popular bird charmer of the era, Le Père Pol.

Henri Pol was a French postal official who visited the Tuileries Gardens, across the Place du Carrousel from the Louvre Museum, nearly every day for forty years. It is unknown or forgotten when he went to the gardens for the first time — it was likely in the late 1870s.

His daily routine made him the most famous Frenchman of his era; everyone knew him or about him. Each day, dressed in black hat, coat, vest, trousers, and shoes, he would walk to various parts of the gardens and await his birds. 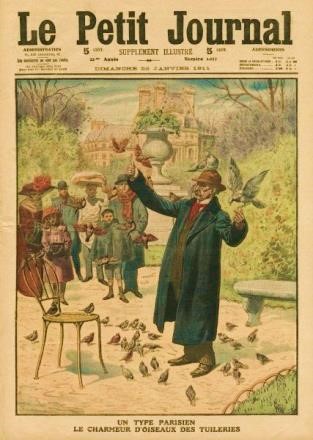 When the sparrows began to flutter, so did the crowds of tourists and often hundreds of children. They would assemble to watch the birds gather around the old man to get the crumbs of bread and marigold seeds he had to offer.

Pol stayed true to his ritual until the winter of 1912. Suddenly he was gone and his disappearance disturbed many, especially one American tourist who single-handedly prodded the police and the press into finding him. 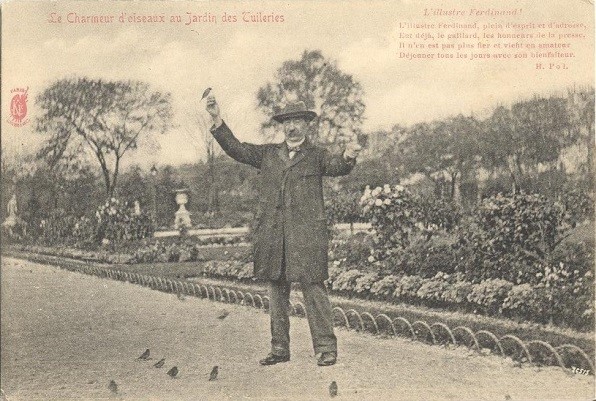 On January 20 the investigators found Monsieur Pol in the Quinze-Vierges Hospital where he had undergone cataract operations on both eyes. He was surprised to learn that much of Paris was anxious about his whereabouts. The hospital nurses told the investigators that he spoke only of “his” birds, and that he thought his whole life depended on them.

After his operation, Pol was required to be in a dark room, but he insisted that he was never lonely if he could sit near an open window where he could hear the twittering of the sparrows in the hospital’s garden. Pol confessed on frequent occasions that he liked the sparrows best. He enjoyed the other birds, but often thought them to be greedy and rude.

No report was found as to how long of a recuperation Pol suffered, but he surely returned to his birds with great tenacity, for even throughout the war years (1914-1917) he was in the gardens by late afternoon to feed his birds.

Thousands of Americans will learn with regret that Henri Pol, the famous old bird charmer of the Tuileries Gardens is dead.

Every afternoon for the last forty years, this veteran postal worker has attracted large crowds of visitors by his method of calling the sparrows. Children regarded Pol as a wizard and many grown-ups shared the belief.

The old charmer, who was well over 80, died yesterday at the home for pensioners at Auteuil, where he had lived in bachelor comfort for many years. His funeral will be held tomorrow. 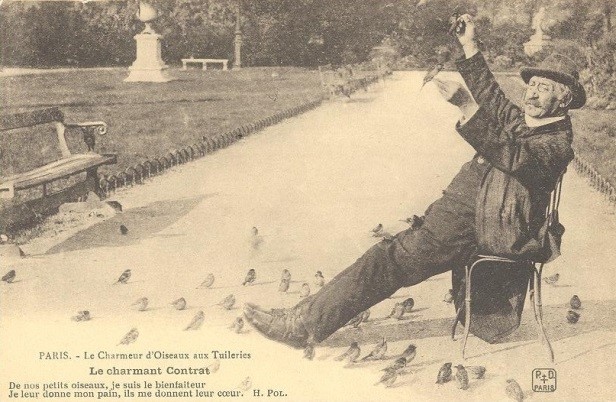 Regrettably, over twenty-five years ago when I began collecting Parisian postcards, I saw little value in these cards. However, I now recognize their worth as an item of social history. It will be unlikely that I continue collecting these cards but I want to share the few I have with you, simply because this is a heart-warming story of a man who was loved and cherished by a generation other than ours.

This article appeared in an earlier form in the South Jersey Postcard Club’s McClintock Letter of March 2014, page 5.

Ray Hahn is a retired educator, but he has never stopped teaching. His decades of researching, writing and editing a newsletter for the South Jersey Postcard Club has been a world-class education in trivia. In addition to postcard collecting, Ray’s other interests include history, genealogy, and touring the world with his wife Marie. Ray often advises his readers to "Join me as we explore the world one postcard at a time." Ray and Marie live in New Jersey.
PrevPrevious ArticleShot Towers
Next ArticleThe Healing Hands of Mahlon LockeNext
6 Comments
Oldest
Newest Most Voted
Inline Feedbacks
View all comments
Mary Schaefer

What a charming article, and good looking postcards.

These are great and so much better collected than just one. How do you get to previous articles on This website?

On the right hand side there is the previous article and after that there are archives. Currently there are three articles, one on the Mansfield Bar and one on why there were so many shot towers in cities. We publish twice a week with a new story on Monday and Thursday.

A little, and often neglected piece of history!

Beautiful bit of history. Thank you for telling us about this sweet man & those gentle little birds.

I have a collection of these cards and it was not until I found one card with a news cutting attached telling of his death that I discovered who he was. Incidentally he was also a poet and the charming poems featured on his cards were written by him.
I had an article about him published in the Picture Postcard Monthly some years ago.