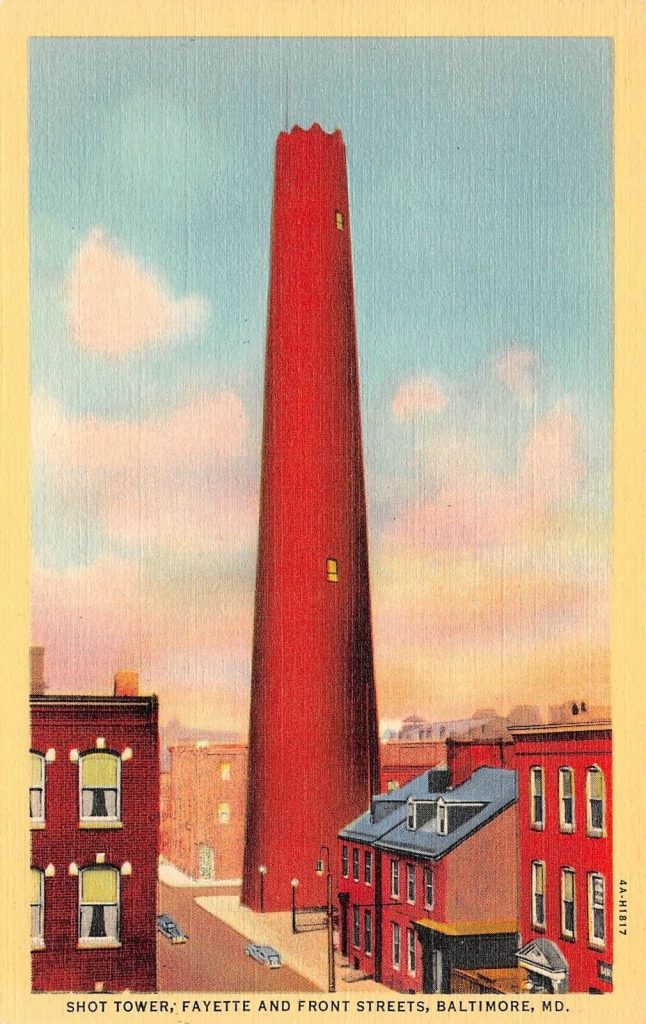 The first time I saw this postcard, I figured that it must have been built ’way outside Baltimore. After all, why would anyone build a munition-testing facility in the city?

Bad analysis, didn’t make sense as I soon discovered. But it led to looking deeper into exactly what a shot tower is.

Guns had for the most part replaced the bow-and-arrow in Europe by the 18th century due to their superior killing power, greater range, and the ease of training a solder to use one (archery is a serious skill, firing a gun is not). In addition, arrow makers (“fletchers”) could not keep up with the demands by large armies, while long-lived pistols or rifles using gunpowder could be deployed and re-used many times more often than bows and arrows.

The technology of gunpower was well established by the time the Pilgrims arrived at Plymouth Rock in 1607 with their blunderbuss firearms. The ingredients are potassium nitrate, sulfur, and activated charcoal. Combined, they can wreak havoc. Of course sulfur is deadly if inhaled and its gas is poisonous. Potassium nitrate similarly has lethal qualities. Handled carefully, though, gunpowder’s creation is simple enough.

Thus the insight of William Watts, a British plumber, in 1782, that making these bullets, called shot, could be done by dropping lead through a sieve, letting it fall from a great height (making the blob round), and having it splash into a pool of cold water could turn out huge quantities of shot very quickly. All you had to do was built a tower.

Here’s a video that shows the process of making shot: https://www.youtube.com/watch?v=T5ghrpmZc5o

The Jackson Ferry shot tower in Wytheville, Virginia, is the first of its kind in America. William Herbert, an expert ore smelter, was brought to Virginia by local businessmen to expand a lead-mining business. He knew of William Watts’s development of the shot tower in Bristol, England and designed this 150-foot high tower much like Watts’s. Its construction was completed in 1807. 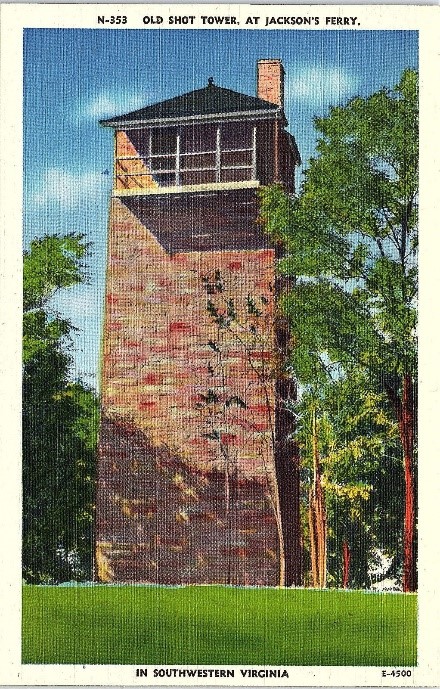 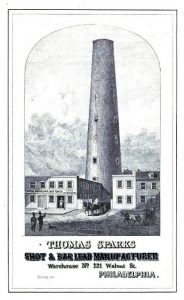 The Sparks shot tower was erected in Philadelphia in 1808. Plumber Thomas Sparks built this 142-foot high tower on the edge of the Delaware River and the Sparks family continued the manufacture of shot there until 1903, when the business was sold and continued until 1913.

It is now the focus of the Shot Tower Playground just off I-95.

The shot tower that started this whole search, the Phoenix shot tower in Baltimore , was built in 1828.

It was said to be the tallest building in the United States at that time (234 feet high).

There were once four shot towers in the city, but this is the only one remaining.

The Phoenix is now part of a downtown Baltimore historic district. 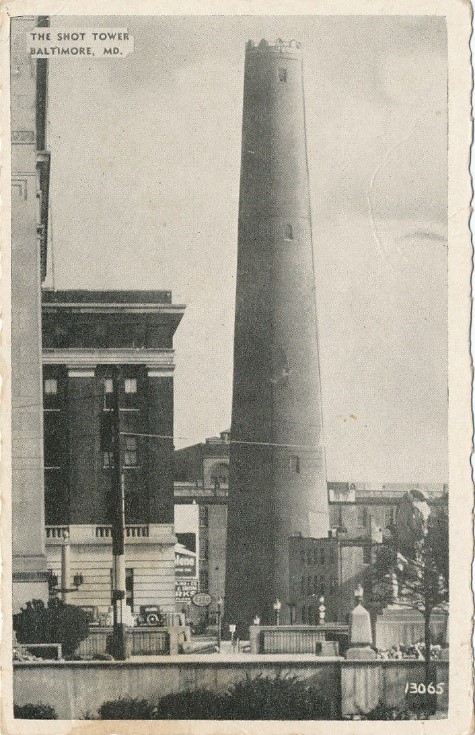 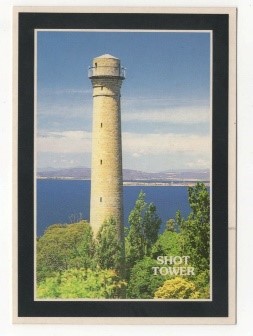 Shot tower technology traveled to Australia where, in 1870, the Taroona shot tower was constructed in Hobart, Tasmania, in a little over eight months. While several other shot towers were built in Australia, this one is one of only three survivors and the only one in Tasmania.

The Tour Saint-Jacques, Paris, is a bizarre example of a shot tower that wasn’t built as a shot tower.

The Church of Saint-Jacques-de-la-Boucherie (“Saint James of the Butchers”) was built in 1575, only to be demolished during the French Revolution in 1797.

The tower was left standing and in 1824 was used as a shot tower. 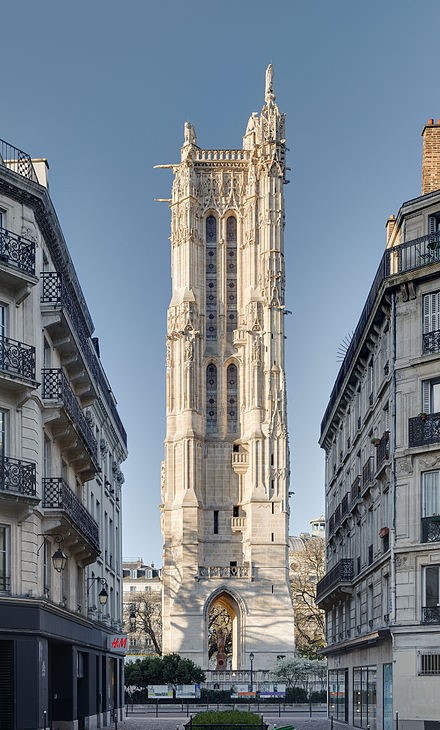 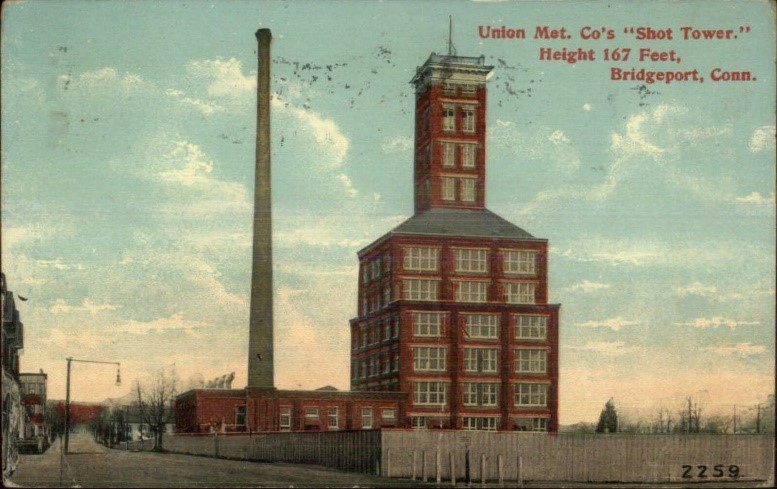 What is now Remington Arms Company began as E. Remington and Sons in 1816 in Ilion, New York. Through a dizzying series of acquisitions it developed a manufacturing plant in Bridgeport, Connecticut not only for its guns but also for its ammunition. This card bears the name of one of the companies that Remington acquired over time, the Union Metallic Cartridge Company of, Bridgeport, Connecticut, where the company made its ammunition. The tower is still standing but the adjacent buildings are in ruins and the site is being redeveloped.

The Dubuque, Iowa shot tower, was constructed in 1856 and almost immediately fell on hard economic times due to the Panic of 1857. 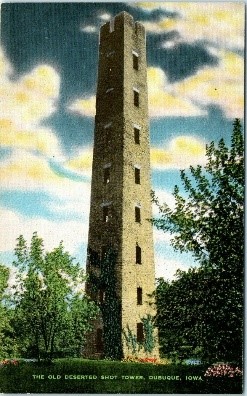 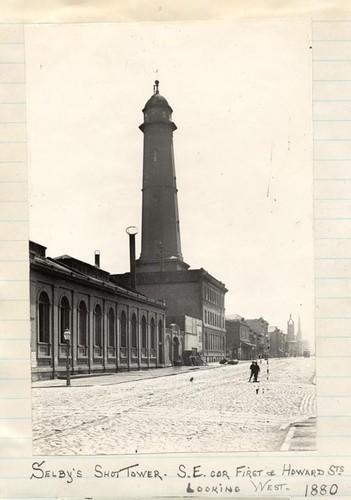 The Selby Shot Tower of San Francisco, California (sometimes called the Miners’ Foundry and Shot Tower) was built by Thomas Henry Selby, who began a local lead smelter business in 1865. The company continued to make lead shot until it was severely damaged in the 1906 earthquake.

The kind of shot that was made in these towers became obsolete with the development of integrated cartridge ammunition, which combines the powder, the bullet, and a casing in one unit and led to the reinvention of the gun. Still, the round shot that these towers made continues to be manufactured, mostly for shotgun shells.

Bill Burton began collecting Ossining, New York postcards when he lived in that Hudson Valley town. His collection expanded, of course, to include his college, the neighboring towns, and places where he and his wife traveled. In retirement, he's refocused on Delaware and the DelMarVa peninsula towns, but he’s just as likely to be found parked in front of the 25¢ boxes at shows.
PrevPrevious ArticleThe Mansfield Bar
Next ArticleThe Bird Charmer at Tuileries GardensNext
11 Comments
Oldest
Newest Most Voted
Inline Feedbacks
View all comments
Mary Schaefer

The science of obtaining the round shot is fascinating. That so many of these towers existed and are documented in postcards just shows what can be unearthed through postcard collecting.

I learned something new today. Thank you.

I have uploaded anotherBaltimore shot tower postcard on the Delmarva Postcard Clubs Facebook page from 1905.

Thanks, Jessica. It’s a nice card I’d never seen before.

Great read. I knew about shot towers since being here in Philadelphia with the Sparks tower …

No one I know has ever seen a Sparks postcard, that’s why I used the image. I’d love to see one that’s not a contemporary chrome from the park.

You know, I have never seen a postcard of the Sparks shot tower. Odd, but for whatever reason it looks like one was never published.

Are there public collections of postcards that could hold such a card? I’m not familiar with Philadelphia collections, but it’s worth a shot.

Great article. Learn something every time I read an article.

I happen to own a shot tower postcard. Thank you for helping me learn more about it!

You’re welcome, Sandra! Is your card one of those in the article? For me, the holy grail of shot tower postcards is the Philadelphia tower. There must also be other shot towers that I’ve not seen. Please let me know what card you have.