The twin pulls of urban industrialization and westward migration that overtook America after the Civil War was devastating to many small towns in New England and the  Middle Atlantic States. In the four decades ending in 1900, despite massive European immigration, the population of many small towns had seriously declined. Farms were abandoned and the towns’ economies eroded.

Frank Rollins of New Hampshire, son of a former New Hampshire U. S. Senator, worried for the future of his hometown. In 1897 he wrote “I wish that in the ear of every son and daughter of New Hampshire, in the summer days, might be heard whispered the persuasive words: Come back, come back! Do you not hear the call? What has become of the old home where you were born? . . . Do you not remember it — the old farm back among the hills, with its rambling buildings, its well-sweep casting its long shadows, the row of stiff poplar trees, the lilacs and the willows?” 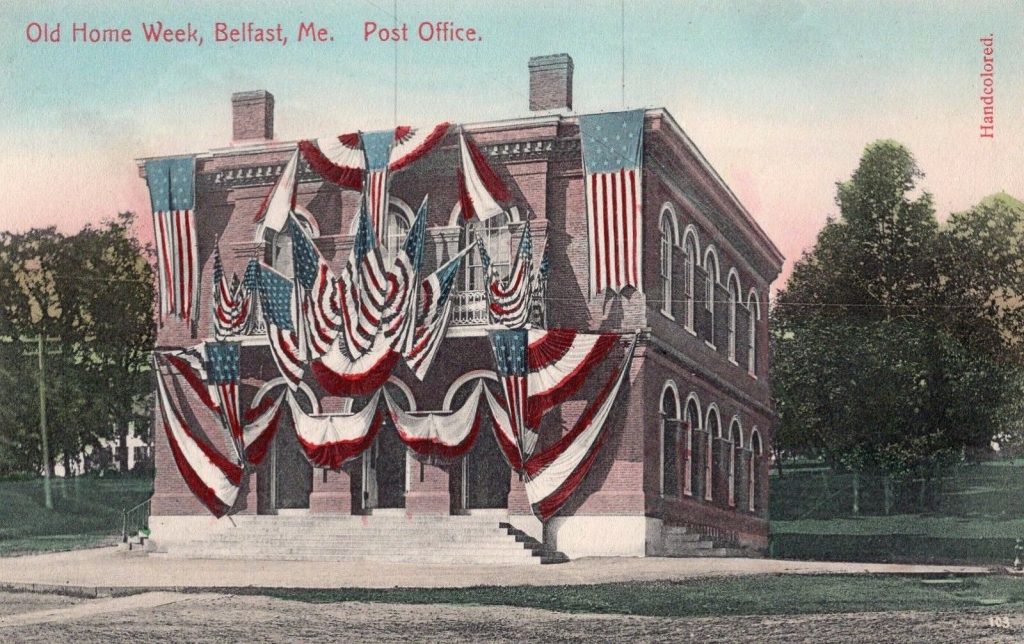 Rollins became Governor of New Hampshire in January 1899 and the first Old Home Week celebrations were held in 44 towns throughout New Hampshire that  summer.

The concept spread throughout New England. This card shows the decoration heaped on the local post office in Belfast, Maine.

And this card, from North Adams, Massachusetts, touts the vitality and the beauty of this Berkshire Mountains town. 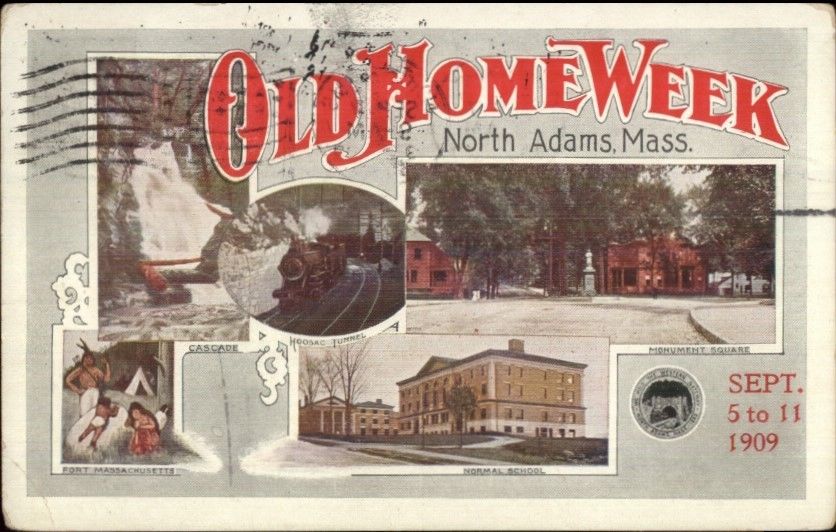 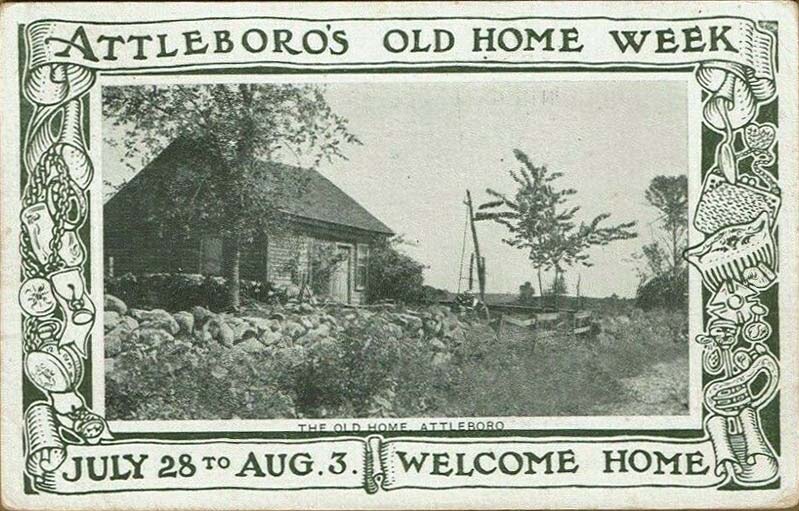 Or this probably locally made card from Attleboro, Massachusetts.

And it wasn’t just the small towns that sought to attract their emigrants. Boston, Massachusetts, for example, held its Old Home Week celebration in 1907, as shown in these two cards. 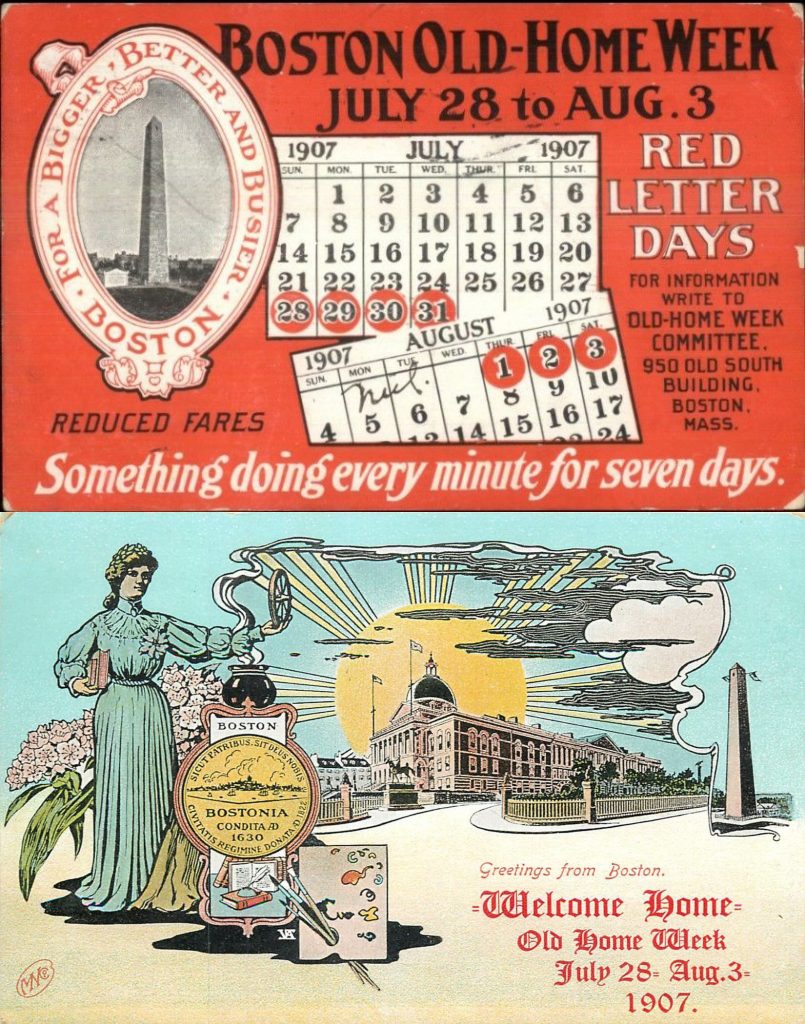 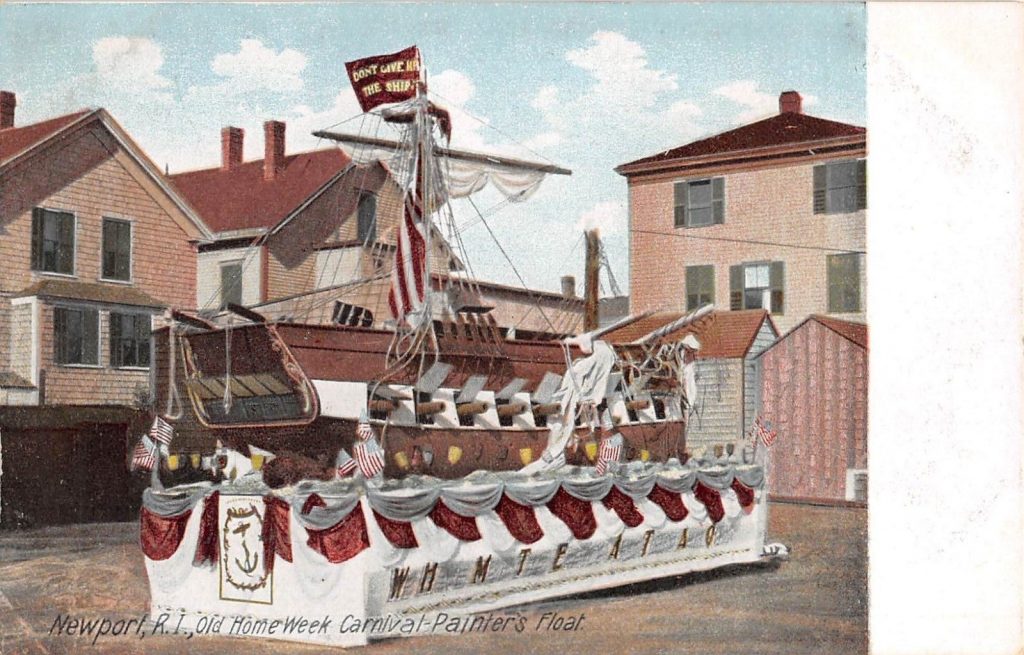 And Newport, Rhode Island, went all out with parades that featured floats sponsored by local businesses.

Many of the small towns in New York and Pennsylvania had also lost large numbers of their citizens to westward migration from their less-than-hospitable soil. These towns made major efforts to bring their prodigal children back.

For example, Buffalo, New York combined Old Home Week with the dedication of the monument to President William McKinley (who was martyred there) in 1907.

This is the official Old Home Week card for the Buffalo celebration. 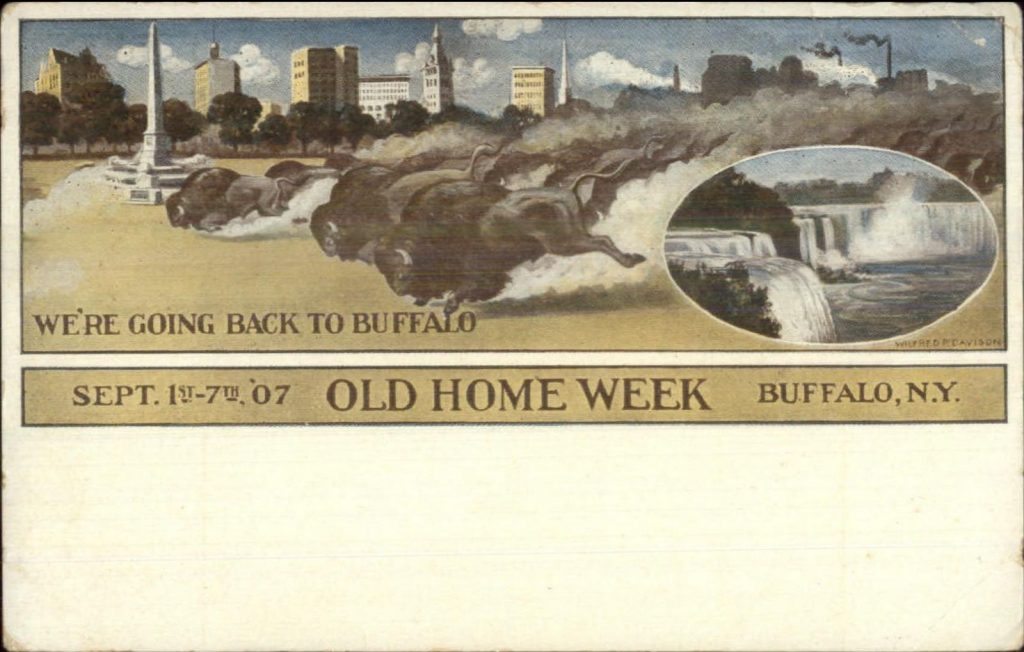 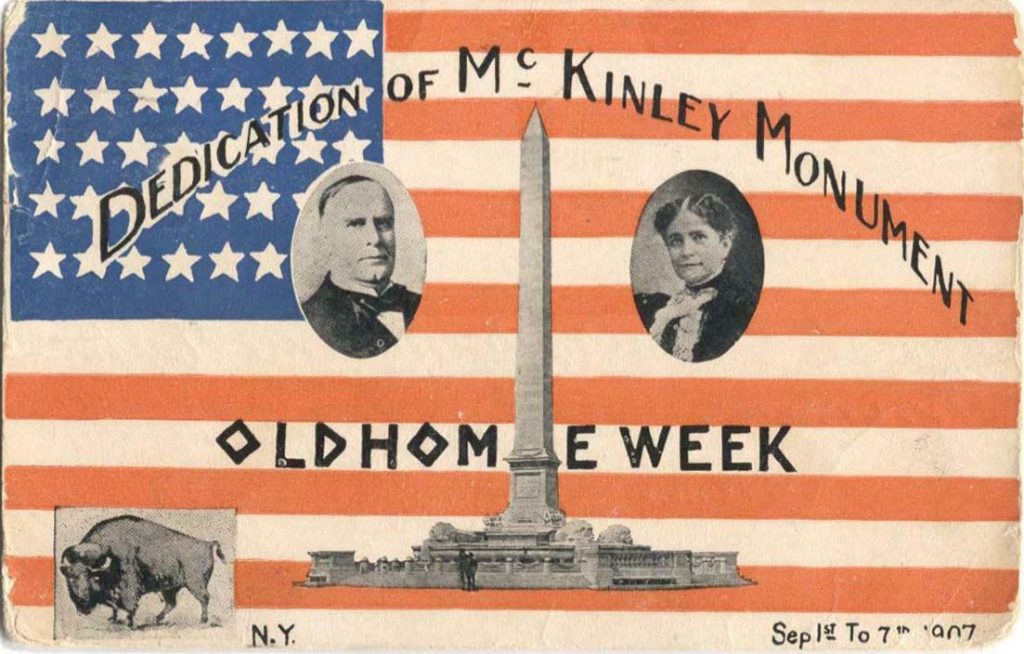 Some small towns didn’t (or couldn’t) spend the money on such flashy announcement cards, preferring to memorialize the event. This real-photo card from the very small town of Conneautville, Pennsylvania (near the Ohio state line), for example, shows the crowds at the celebration in town.

The state capital, Harrisburg, on the other hand, couldn’t restrain itself.

Further south and west, celebrations in the era were held in Baltimore, Maryland, in what must have been a banner year for Old Home Weeks, 1907. 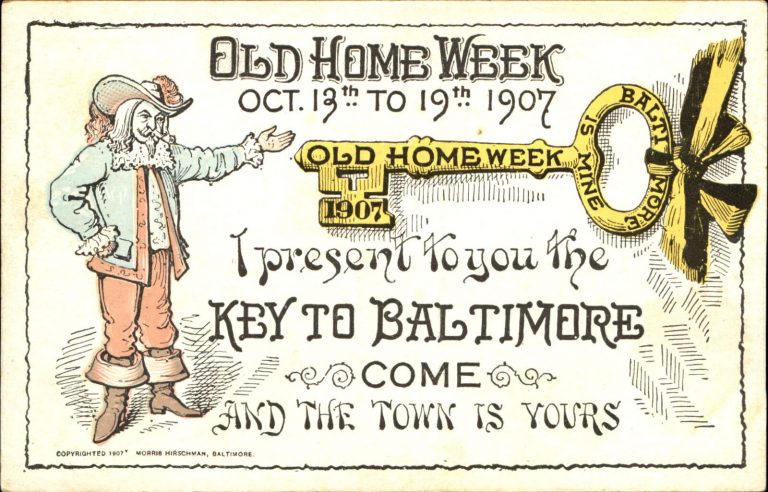 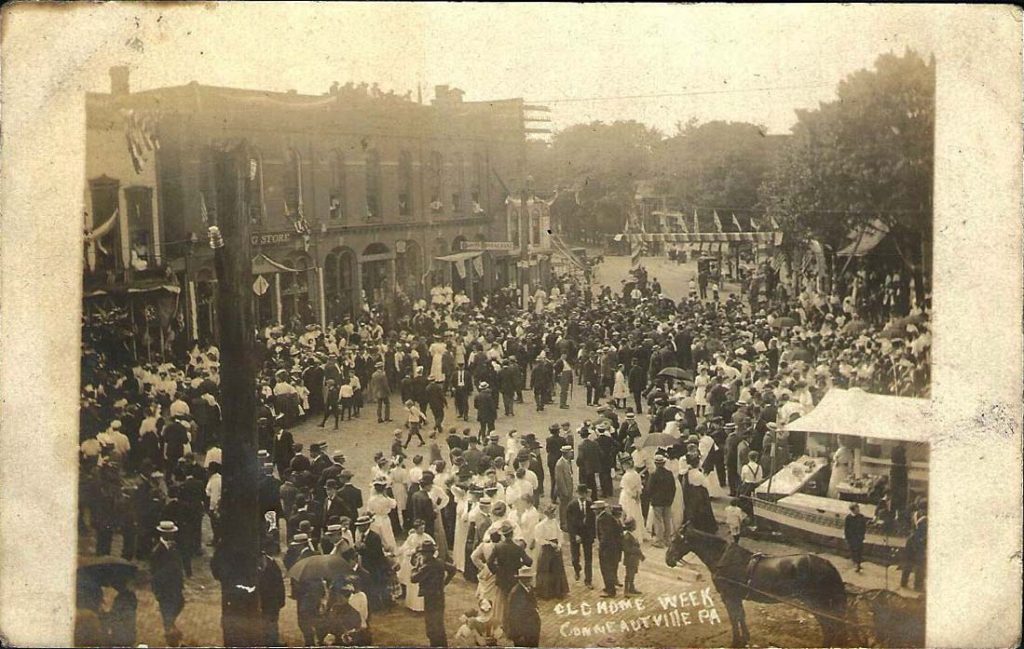 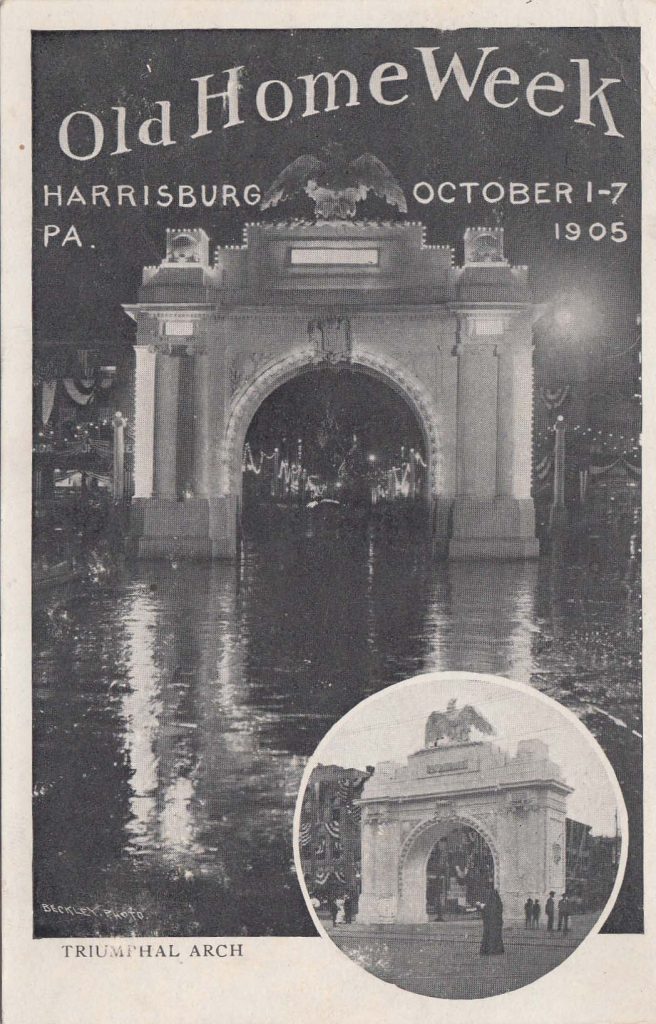 States far away from the eastern seaboard caught the bug as well. Oshkosh, Wisconsin, for example, held a celebration in 1908. 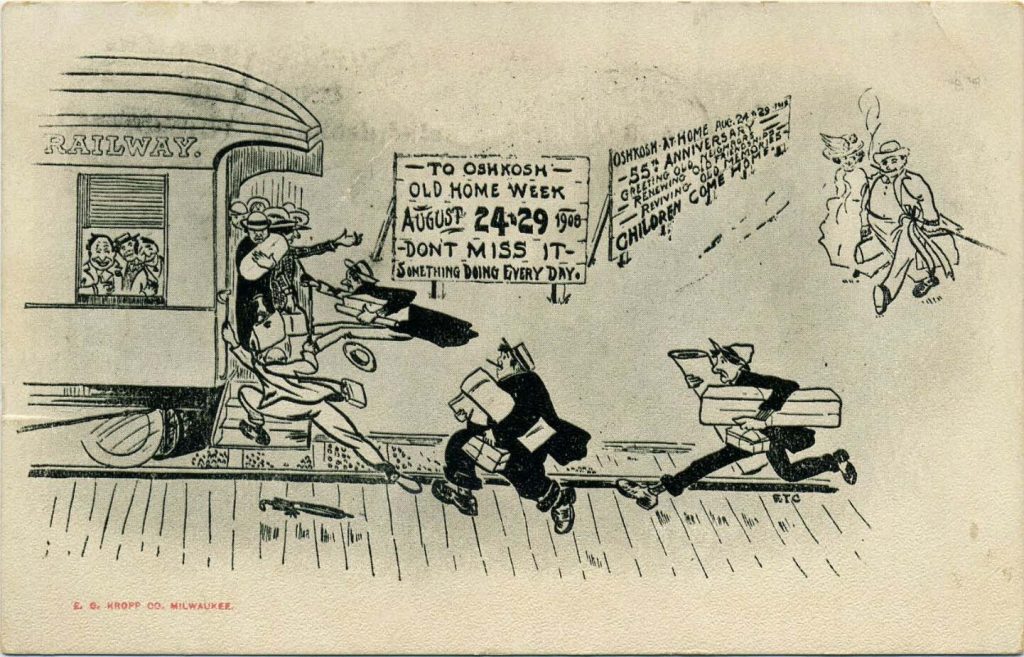 Some people must have thought poetry would bring returnees. Such as on this card from Belvidere, Illinois. 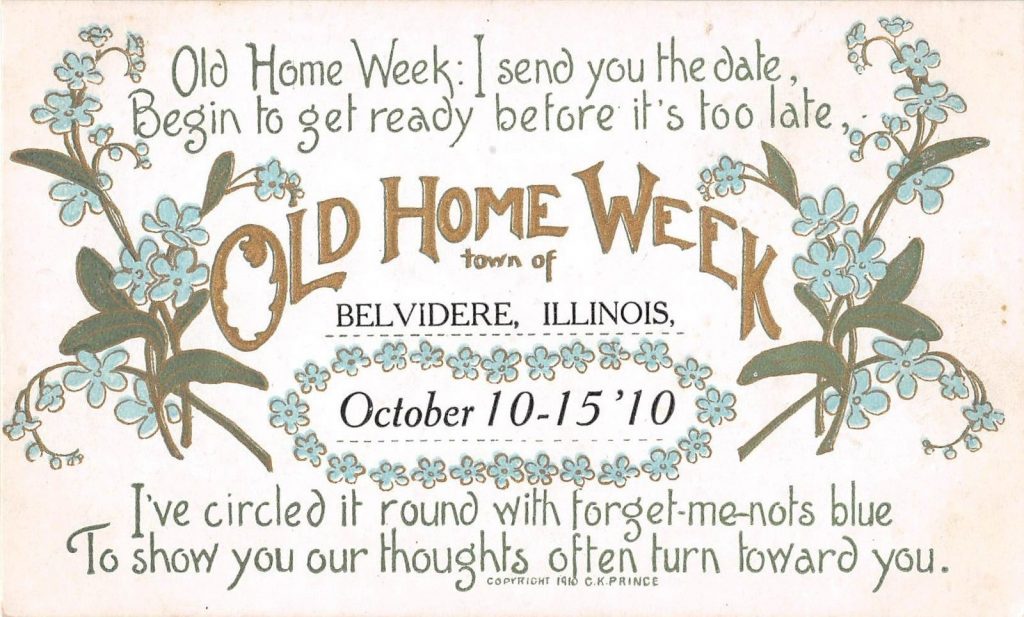 To save money, some communities used postcards they already had of their communities and just printed a message of invitation on the back. Here’s one from Youngstown, Ohio.

Finally, there is always advertising and souvenirs. The wheel on this card turns to reveal approximately 12 Boston views — courtesy of La France Shoe Company of Lynn, Massachusetts. 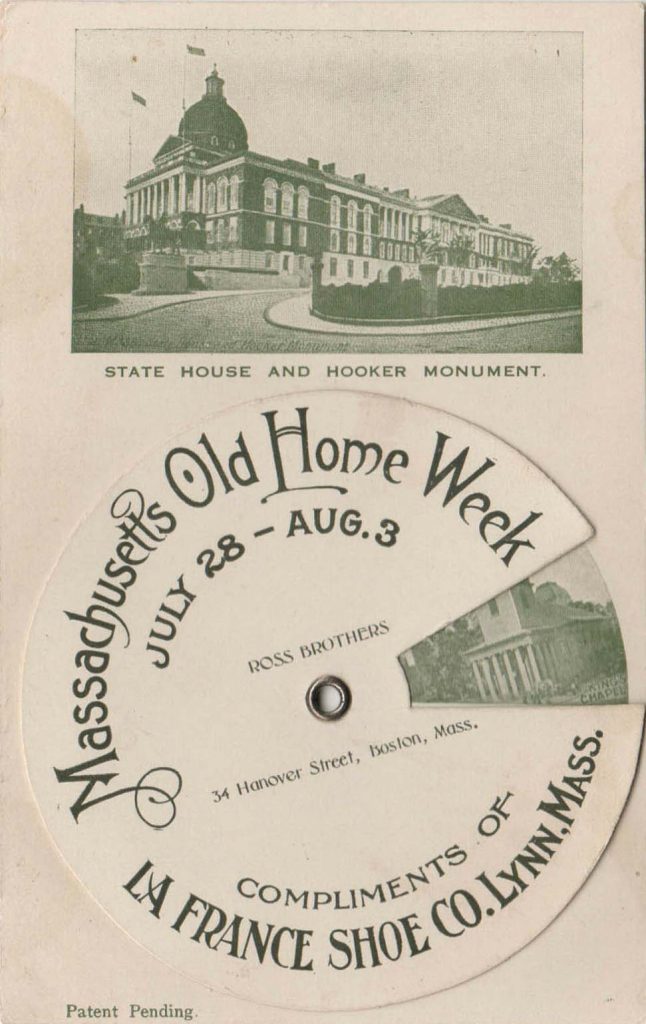 And this card doesn’t even bother trying for local patriotism. 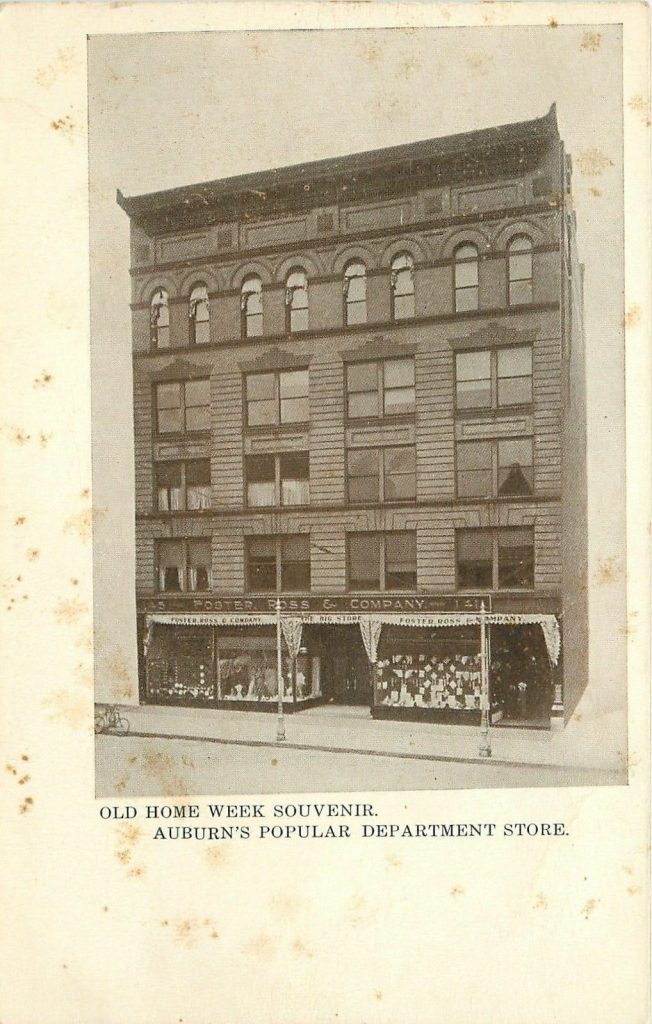 And what would these celebrations have been without a souvenir pin? This one is from Gouveneur, in New York state near the Canadian border. 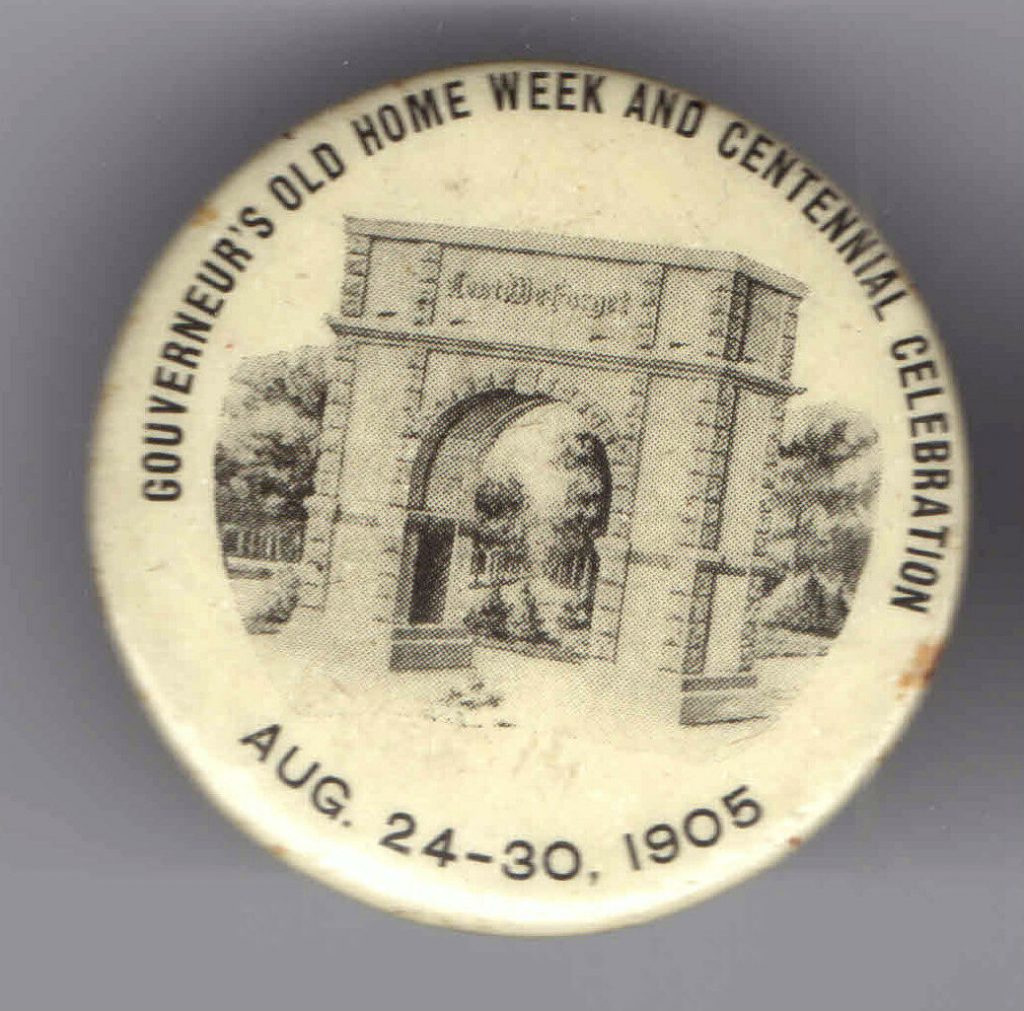 The Old Home Week movement survives today and is not confined to its original purpose. Several communities in various parts of the U. S. combine Old Home Week celebrations with historical and centennial celebrations, for example. It is, after all, the thought that counts.

Bill Burton began collecting Ossining, New York postcards when he lived in that Hudson Valley town. His collection expanded, of course, to include his college, the neighboring towns, and places where he and his wife traveled. In retirement, he's refocused on Delaware and the DelMarVa peninsula towns, but he’s just as likely to be found parked in front of the 25¢ boxes at shows.
PrevPreviousHave Gun Will Travel
NextPunny PostcardsNext
10 Comments
Oldest
Newest Most Voted
Inline Feedbacks
View all comments
Bonnie Wilpon

I love this postcard collecting topic! I’ve probably seen several of these over the years, but didn’t realize it was a “thing”. Now I’ll be on the lookout!

First time I saw one it seems odd, since it was from Harrisburg, the capital of Pennsylvania. But I started looking for them and they’re all over the place. I get New England, but Illinois? Baltimore? Maybe they just love a good parade.

I have heard of these events but never got an explanation of their existance, thanks.

Are towns in New England still promoting an “Old Home Week”? It might be a good idea to increase tourism.

They do. But not only New England, it’s all over the place. Much of it is tied to local historical society fairs and booster events, but that’s the point, isn’t it?

Several Asian societies still have a similar custom of returning to one’s rural home at New Year or on another holiday, eg China, Japan,and (I think) Thailand. Of course, they don’t call it Homecoming week but have their own names for it.

If you search on Ebay using the name of almost any historic city or town, it will come up with often hundreds of postcards of scenes in that town. You then have for your perusal a personal museum and the opportunity to buy whatever suits you.

I grew up in a small town in Massachusetts, so this is near and dear to my heart. Kudos!

In many places, such as North Olmsted, Ohio (where I grew up), this event is known as “Homecoming”.

Hi Bill! I have an old postcard of Baltimore Old Home Week from 1907. It is divided back and very unique. It is shaped like a house and it folds open to reveal a fold out of small pictures of all kinds of famous places around the Baltimore area. Would you be interested in purchasing this card or have an idea of what it might be worth? I deal in vintage and antique postcards, so I know my way around them in general, but I have looked far and wide and haven’t found anything like what I have. The closest… Read more »