Dinner With a Stranger

The hedonist in me demands the very best, at least when its affordability is within the extreme limits of my wallet. Now that you know that about me, let me tell you of a wonderful experience when I had dinner with a stranger. It was on the western coast of France only a few years gone bye. At least it seems like yesterday for then I was so young and now I am so old. 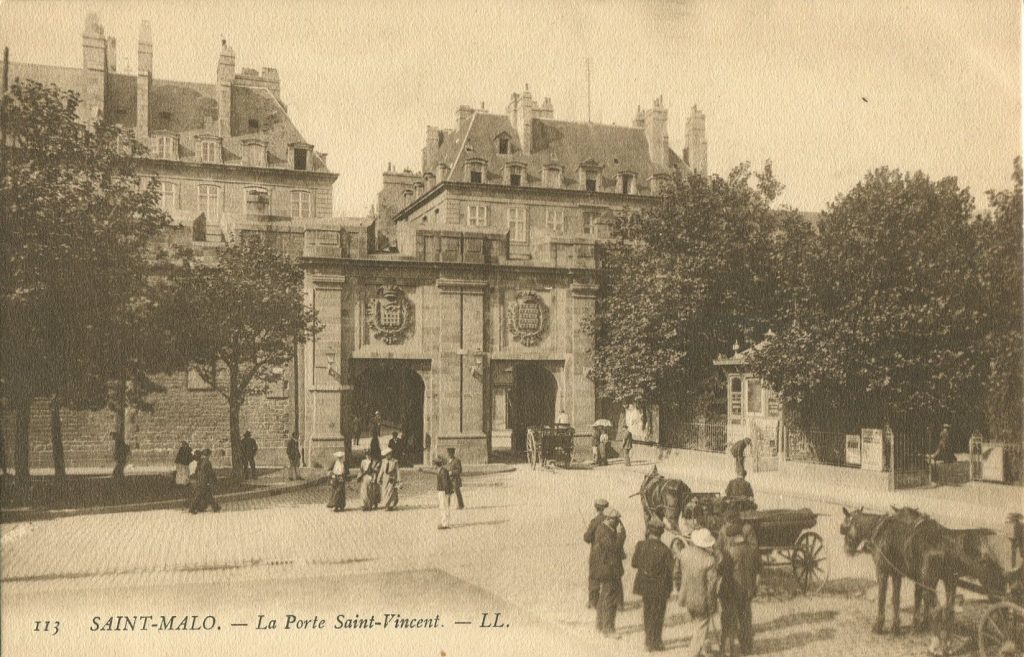 My weary bones found themselves in the small town of St. Malo, situated on the northern shore of Bretagne – 400 kilometers west of Paris.  I was alone that night, as my traveling companion of the last six weeks needed to return to America for the beginning of his fall semester at Bucknell University in eastern Pennsylvania.  It seemed strange at first, but when I entered the centre-ville through a massive stone gateway that was larger then my boyhood home, I saw at once a hotel whose name immediately caught my interest – Le Grand Hotel Continental Chateaubriand.  I had often heard the name as it related to a piece of beef tenderloin that my father would order as a meal in the best restaurant in my home town and he and my mother would share the meat while enjoying different side-dishes.  Baked potato was my mother’s usual choice, while my father always asked for mashed with onions, even though they were not on the menu. 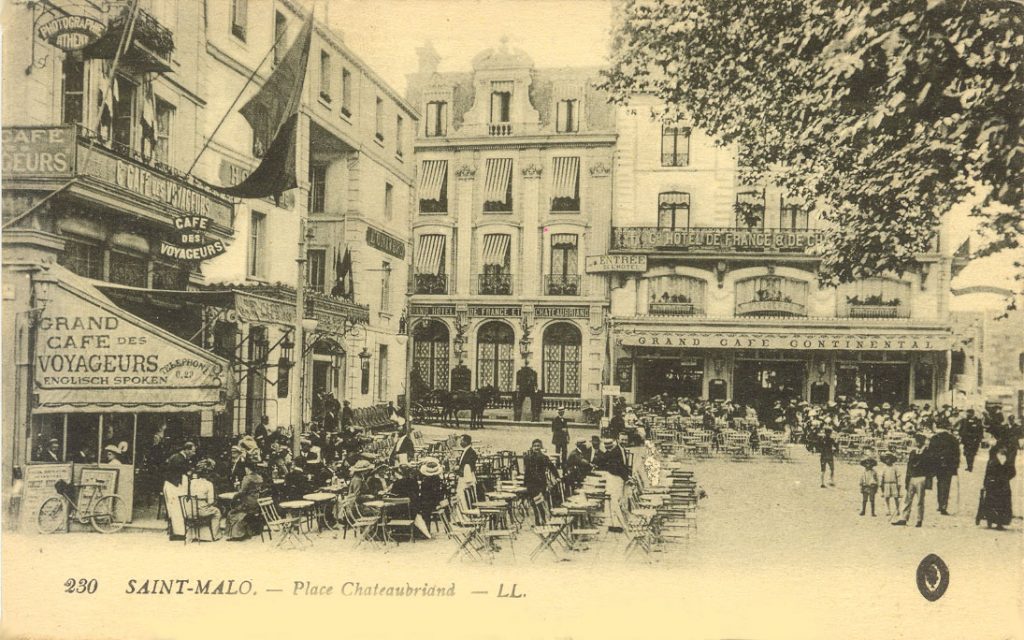 I entered the hotel on a lark, almost sure there were insufficient funds left in my wallet for a stay in such a place as this.  The desk clerk looked at me and suggested that if I wanted a room for the night I should register immediately since he had but one room yet unsold.  The fee for that night in August 1967 was seven francs – approximately $28.00 – a princely sum in those days.  The room fee included dinner, but I needed to be sure of how much cash I could allow to flow.  I opened my wallet and found that if I spent the money for this totally unnecessary extravagance, I would have but 13 francs left to pay for my return trip to Paris and my transfer to the airport for my flight home the day following.  Thank goodness the plane ticket was an advanced purchase – a somewhat unusual situation in those days.  Gamble, I may?  Gamble, I must!

I did the clerk’s bidding.  I registered, bathed and napped for the remainder of the afternoon.  I awakened at just passed six o’clock and felt a need for a walk.  In St. Malo, the best views of the city are from the ramparts of the town walls.  Any casual tourist can make a nearly complete circuit of the town without his feet touching the ground.  I walked about a quarter mile and stopped to peer over the edge at the beach below. 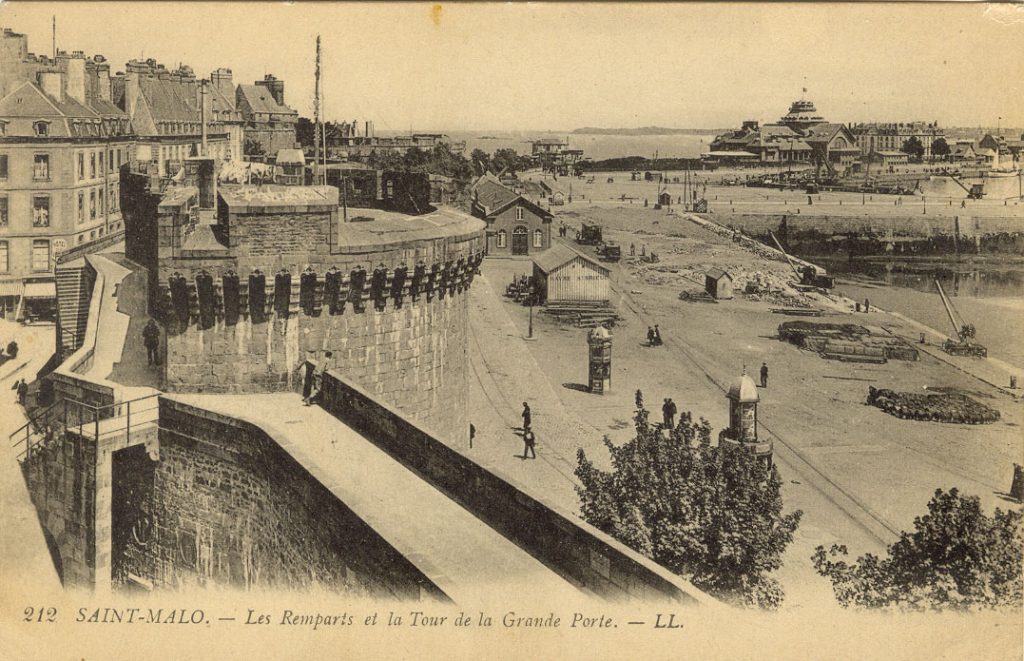 The beaches were empty at that hour, the swimmers had returned to their hotels and only a few shoppers remained in the streets.  About thirty meters farther along the wall was a typical park bench.  I decided to sit and people watch.  I love the French and if you plan to watch people in France the French are the best people to watch.  Forget the tourists, you can see them anywhere.

After about ten minutes on that bench I was joined by a young French woman who dropped three large packages on the far end of the bench, then opened a small purse and removed a cigarette case.  She sat down next to me and lit a cigarette with a gold lighter that I thought must have cost her (or at least the person who gave it to her) at least $50.00.  She turned to me and said, “You’re an American; my name is Nicole.  They call me Nic, N – I – C, Nic.”  I’ve always wondered how the French can do what they do.  Within a couple seconds of meeting someone they have your nationality pegged to a “T” and they make you feel like you have known them for at least two decades.

I told her and added that I was only in St. Malo for the evening and that I would be returning to Paris in the morning and going on to New York City the next day.  I was returning to my teaching job in a small town in southern New Hampshire.

“Where are you staying?” she asked.

I answered her and thought that would be about as far as our conversation would go.

Later, promptly at nine o’clock, I entered the Grand Café Continental for my dinner and learned that I had bought a room that included a fish or beef dinner for two with potato, dessert and café.  The waiter had no sooner explained the fare for the evening when it ran though my brain that I didn’t need dinner for two, and immediately after the thought came, it went right back out of my head.  Why, you ask?  Oh, my, please ask why.  Okay, I’ll tell you anyway.

Nicole had just walked into the café and she was just as alone as I was.

I didn’t think; I just did it.  I stood and walked toward her and said, “Please, Nic, N – I – C, Nic, join me.”  She did.  We ate dinner – a very large Chateaubriand – with potatoes, crème pie and coffee.  We talked until mid-night.  I never saw her again.  I don’t even know her last name.  I have never forgotten her.  I’ve told this story a hundred times, and when I do, I wonder if Nic, N – I – C, Nic, remembers her dinner with a stranger?

Until recently eating with strangers was not that uncommon in this country, either. I remember when traveling for business I would sometimes be asked by a waiter if I wished to dine alone or with someone else. I always chose someone else because eating by myself was boring. I met all sorts of interesting men and women and, while we never saw each other again, the meals we shared were always pleasant.

Samoa Cookhouse, on the north coast of California, has tables for ten seating. A set menu (around $10.) this dining experience is in a lumber camp setting. Skillets are placed on the table, all one can devour will satisfy most everyone. Afterward, their small (free) museum can capture your attention on how this once mighty industry once dominated (this town) Eureka.