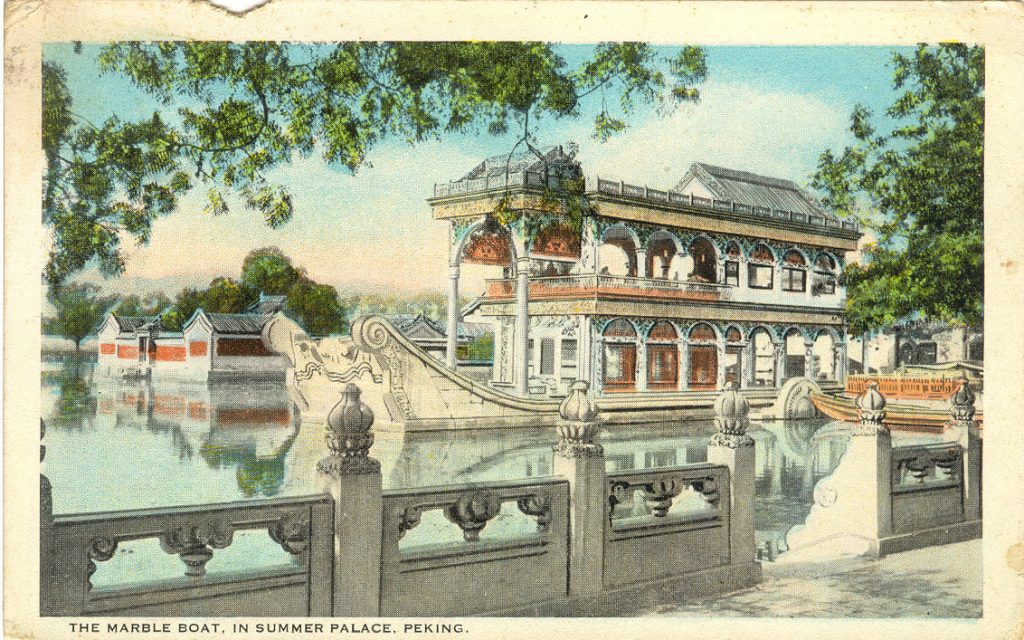 The Marble Boat, in the Summer Palace, Peking.

Remembered by those who have visited as the Marble Boat and known by the Chinese as the Boat of Purity and Ease, is not marble and it is not a boat.  This remarkable structure is a two-story pavilion made of wood that stands at the edge of Lake Kunming – part of the area known as the Summer Palace in Beijing, China.

In October 1735 (the year President John Adams was born), Qianlong Emperor (pronounced ching΄-lǎwg) was about to begin a reign over the Chinese which lasted 61 years.  He was the most successful of the Qian Dynasty emperors, and as leader of his dynasty, he did his best to grow the population – his twelve consorts bore him 18 children of whom nine princes and five princesses survived to adulthood.  He became the most esteemed military leader of his time and with the help of his brothers and his loyal friends, the expansion of the Qian kingdom grew to more than 80 million square miles. Qianlong Emperor was also a major patron of the arts.  In 1750, year 15 of his reign, he commanded the construction of a beautiful new palace for his family – a Summer Palace – a place of quiet for study and contemplation.  It was ordered that the palace grounds include Longevity Hill and Lake Kunming, and it is along the lake’s edge that the Marble Boat was built in 1755.

The original ‘boat’ was erected on a foundation of large stone blocks that supported a wooden superstructure created from traditional Chinese designs.  Qianlong retired in 1796 and died in 1799, but his Marble Boat became a much loved feature of Chinese lore.  Sixty years later, during the Second Opium War, the pavilion was destroyed by Anglo-French forces.

The Marble Boat was nearly forgotten, but by order of Empress Dowager Cixi it was restored in 1893, using a new design that incorporated several elements of European architecture.  The new Marble Boat became a new symbol of Chinese culture, but like its predecessor, the restored version was also made of wood and painted to imitate marble.

At just over 100 feet long, the two decks are lined with mirrors and on each side are imitation wheel paddles to make it look like a steamboat.  A very complicated drainage system which channels water through four hollow pillars keeps the pavilion dry as snow melt and rainwater are finally released into the lake through the mouths of four dragonheads.

The fact that the Marble Boat does not float is simply not lost in Chinese political irony.  Intentionally, the money used to restore the Summer Palace largely came from funds earmarked for improving the Imperial Navy.  The controller of the admiralty owed much of his social standing and his appointment to the Empress Dowager, thus he had no choice but to condone the embezzlement.