One of the “Strangest” Postcards Ever!

The postcard here is truly unique. A guess would date the card from the 1930s. It tells the story of Sarah Bishop of North Salem, New York. (North Salem and South Salem, New York are in the Taconic Valley, near the boundary line with the state of Connecticut.) Together the two villages are home to just a few more than two thousand New Yorkers. I’m betting that only a few have ever heard of Sarah Bishop.

The card was once featured on a poster for a North Salem Free Public Library outing to the unassuming abode of North Salem’s eighteenth century hermitress! It was really just a hike into the hills.

The caption is copied exactly below. 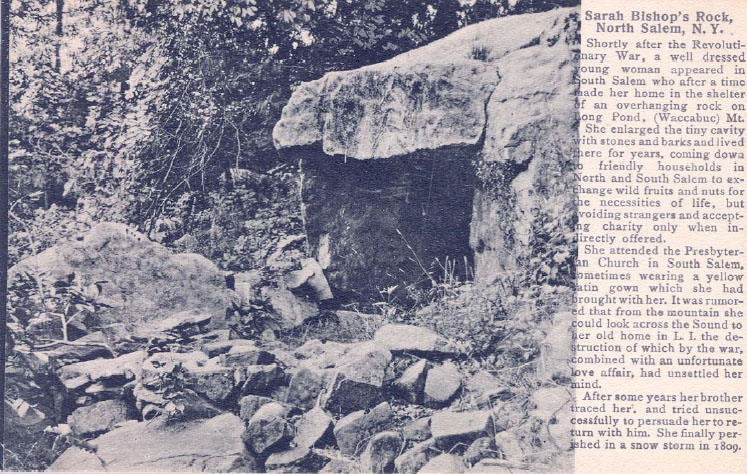 Shortly after the Revolutionary War, a well-dressed young woman appeared in South Salem who after a time made her home in the shelter of an overhanging rock on Long Pond, (Waccabuc)

She enlarged the tiny cavity with stones and barks and lived here for years, coming down to friendly households in North and South Salem to exchange wild fruits and nuts for the necessities of life, but avoiding strangers and accepting charity only when indirectly offered.

She attended the Presbyterian Church in South Salem, sometimes wearing a yellow satin dress which she had brought with her. It was rumored that from the mountain she could look across the Sound to her old home in L. I. the destruction of which by the war combined with an unfortunate love affair had unsettled her mind.

After some years her brother traced her, and tried unsuccessfully to persuade her to return with him. She finally perished in a snow storm in 1809.

Editor’s note: The caption is copied exactly as it appears on the card. I have no qualm with the grammar, the syntax, nor the spelling, but if you’re standing on any mountain in South Salem, New York, you are at least 25 miles from the nearest point on Long Island, and at that you would have to look across parts of two states and the entire width of Long Island Sound. Ms. Bishop must have had extraordinary eye-sight or this is a bit of an exaggeration.