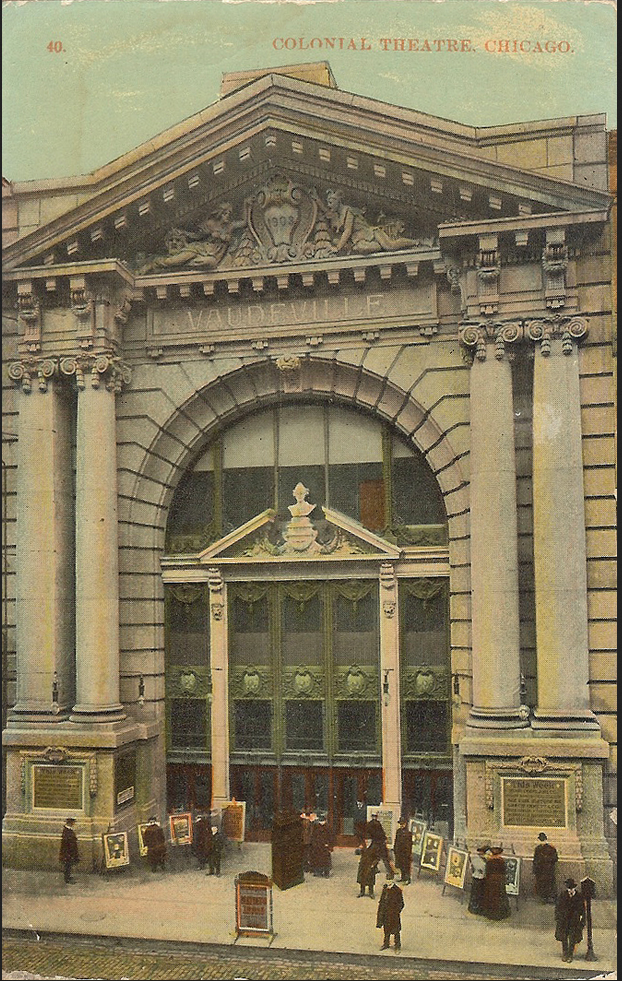 Iroquois Theatre
(This image is the only one known to appear on a postcard. It is also used as the only illustration of the theater on the website.  Here’s the story as found on the Iroquois Theatre Memorial Website.)

That’s the way the lead story in the Chicago Sun-Times began on the morning of December 31, 1903.  A grusome story of death and suffering that need not have happened.

The Iroquois Theatre was a mere five weeks old that day in 1903. Located on Randolph Street between State and Dearborn, it was a magnificent palace of marble and mahogany, a “virtual temple of beauty,” and had been advertised as “absolutely fireproof.”

On the afternoon of December 30th, an audience of 1,900 was present to see Eddie Foy and Annabelle Whitford in the musical comedy “Mr. Blue Beard”. The crowd consisted of mostly women and children.

As the orchestra played “Let Us Swear by the Pale Moonlight” during the second act, a malfunctioning arc light ignited the muslin drapes. The fire quickly spread to the backdrops hanging above the stage, pieces of which then fell toward the performers. The actors fled; Eddie Foy soon returned and urged the audience to remain calm and in their seats.

The crew tried to lower the asbestos curtain between the stage and the audience, but midway down, it stuck – the  wooden tracks had jammed with fire debris. As the stage collapsed, the audience panicked and ran for the twenty-seven exits, only to find most of them locked. Those in front were trampled and crushed against the doors, which opened inwards.

The whole tragic event happened in less that fifteen minutes, and by the time firefighters arrived, the auditorium was silent. Five hundred and seventy five were dead, and at least 25 more would die from their injuries.

The Iroquois fire prompted new safety standards nationwide. Under the new laws, exits had to be clearly marked; be openable from the inside at all times; and all exit doors were required to open outwards.

It was the worst theatre fire in the history of the United States, and had the highest number of deaths of any fire in Chicago, surpassing even the Great Chicago Fire of 1871.

A coroner’s inquest began within a week. Over two hundred witnesses testified. It was a national sensation, exposing unbelievable laxity on the part of the theater and city officials charged with public safety. Hearings revealed that ‘complimentary’ tickets motivated city inspectors to ignore the fire code and let the theater open without proper inspections.

What a tragic story – interesting it is not more well known – at least some new laws were implemented that made things safer. Great features “in
a few words.” keep up the good work.