For most who search for their ancestors in online databases, the home that great granddad lived in is always a mystery. A researcher may find an address in a small town, somewhere, USA, but today that address belongs to a QuikMart or a Walgreens. For the few lucky researchers who find postcards of their ancestor’s home it is a whirlpool of emotion. This story tells of how one collector found her Second Great-grandfather’s home on a postcard and learned a lot of history she never knew. 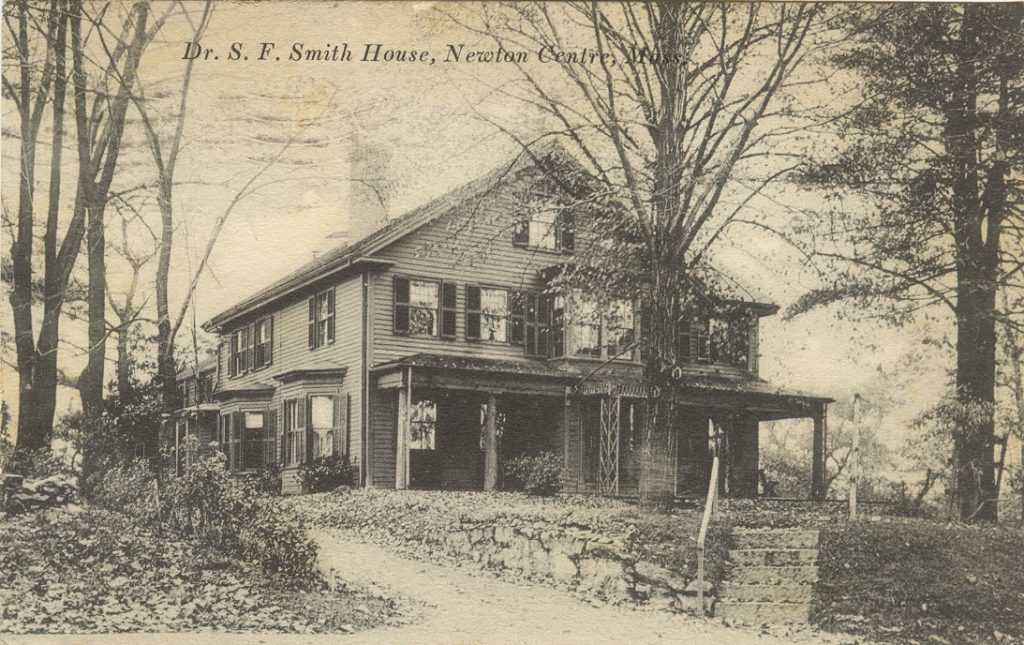 After a thorough examination of this card, it can be said that it is truly a piece of American history. Such a claim can be made for these reasons. The owner of the house on the card created one of our nation’s most-loved songs. The message mentions the influenza pandemic of 1918 and both the sender and addressee can be identified as gentlemen whose work improved their communities and our country. 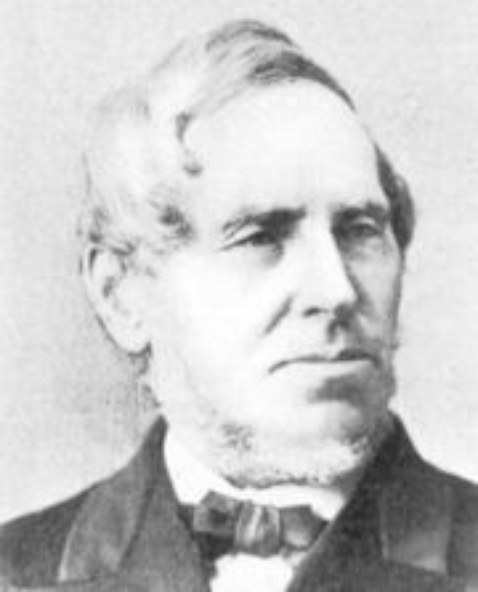 The card pictures the home of Dr. Samuel Francis Smith (1808-1895) at 1181 Centre Street in Newton Centre, Massachusetts.  Smith was a man who served many masters: as a professor of modern languages he served the students of Waterville College; as a Baptist preacher he served his congregation in Newton Centre.

Later, he was an editor for BMU (Baptist Missionary Union) publications and as a song/hymn writer he published hymnals for Christian communities worldwide.  It is thought that he composed more than 150 such songs.

One of Smith’s songs was America.  While a student at the Andover Theological Seminary, he wrote the lyrics, My Country, ‘Tis of Thee, Sweet Land of Liberty in 1831.  A friend, Lowell Mason had asked him to translate the lyrics in some German songbooks or to write new lyrics.  One melody in particular caught Smith’s attention.  The German version was a patriotic hymn, but instead of translating it, Smith decided to write an American version.  Within thirty minutes he had written the now famous lyrics to go with the old melody.  He had never heard the tune before and had no idea of its association with the British as their national anthem, God Save the King.  Smith gave Mason the new lyrics and the song was first performed on July 4, 1831, at an Independence Day celebration at Park Street Church in Boston.

Smith died in November 1895 on a train while en route to preach in Readville, Massachusetts.  Seventy-five years later (1970) he was inducted into the Songwriters Hall of Fame together with George Gershwin, Ferdé Grofe, Richard Rodgers and many others.

Interestingly a granddaughter of Reverend Smith lived in the house until the 1950s, but sadly, it was damaged by fire in 1968 and again in 1969 and has been torn down.  In a telephone conversation, Mr. Wheaton Wilbar, president of the Samuel Francis Smith Homestead Society, told me his organization currently owns and maintains the property as “green space” for the village of Newton Centre. The Society’s original intention to create a Smith museum has been abandoned. 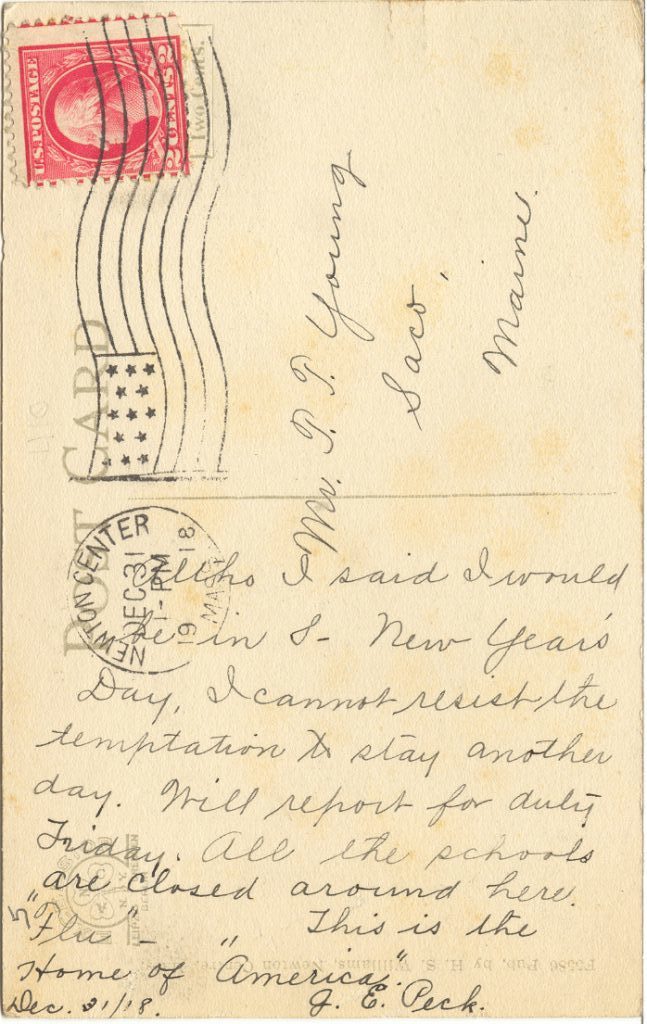 La Grippe
The sender of this card, J. E. Peck, mentions in his message that “This is the home of America.”  Peck dated the message, December 31, 1918, and the card was postmarked at 1 PM the same day.  The rest of the message was:  Altho [sic] I said I would be in Saco New Year’s Day, I cannot resist the temptation to stay another day.  Will report for duty Friday [January 3, 1919].  All the schools are closed around here.  “Flu.”

When I read that one word sentence, “Flu,” it was like being struck by lightning.  I remembered reading about the December 1918 Spanish Influenza – La Grippe, they called it – a worldwide pandemic that killed more than 25 million people.  More people died of this influenza in a single year than in the four years (1347 to 1351) of the Black Death.  One of the victims in 1918 was my wife’s grandmother and I have been told by many that their families were also affected.

A Stanford University website suggests the effect of the epidemic was so severe that the average life span in the US was depressed by 10 years.  People were struck with illness on the street and died rapid deaths.  One anecdote from the era was of four women playing bridge together late into the night – overnight, three of the women died from influenza.  Stories are told of people on their way to work suddenly developing the flu and dying within hours.

One physician wrote that patients with seemingly ordinary influenza would rapidly “develop the most viscous type of pneumonia” and later when cyanosis appeared in the patients, “it was simply a struggle for air until they suffocated.”  Another physician recalls that his influenza patients “died struggling to clear their airways of a blood-tinged froth that sometimes gushed from their nose and mouth.”

The physicians were helpless, but the children of the time would skip rope to the rhyme:

I had a little bird, Its name was Enza.
I opened the window, And in-flu-Enza.

So Who Were These People?
Smith we now know, but who was J. E. Peck?  Peck addressed this card to Mr. T. T. Young of Saco, Maine.  Saco is a suburb of Portland, Maine – approximately 15 miles south-west.  In the message Peck wrote, “Will report for duty Friday.”  What kind of duty?  We could assume that people who report for duty are doctors, clergymen, professors, and most likely other professionals.  I thought it fair to rule-out military.  I couldn’t resist the temptation to know more.  I emailed the public library in Saco and asked the reference librarian to search their local directories for the names Young and Peck.

The following is what has been found . . . in the January 1904 Sloyd Directory, a recording of the activities, principles and personnel of the Sloyd Training School of Boston, the name Theodore T. Young appears with the title of Superintendent of Schools of Saco, Maine.  There was no J. E. Peck listed in any contemporary source, but there were Pecks who lived in Saco in the 1920s and as of 2008 there is at least one person with the name Peck living on Grey Street in Saco. 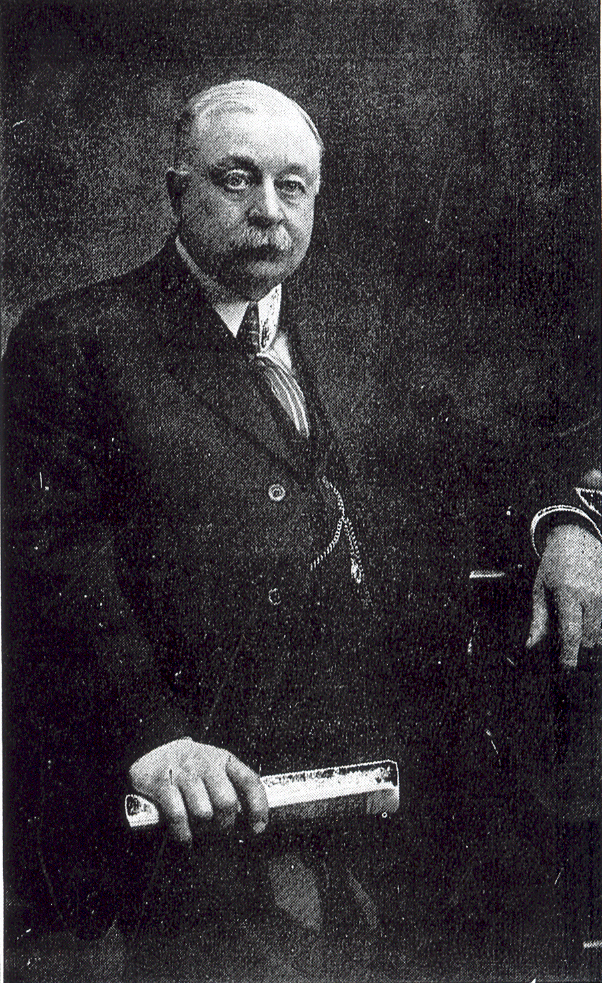 PrevPreviousMy Dad and Ernie Pyle
NextHow Old Is That PostcardNext
Ray Hahn is a retired educator, but he has never stopped teaching. His decades of researching, writing and editing a newsletter for the South Jersey Postcard Club has been a world-class education in trivia. In addition to postcard collecting, Ray’s other interests include history, genealogy, and touring the world with his wife Marie. Ray often advises his readers to "Join me as we explore the world one postcard at a time." Ray and Marie live in New Jersey.
0 Comments
Inline Feedbacks
View all comments
0 0 votes
Article Rating
Menu