How Old is That Postcard

Postcard collectors have a few tricks up their sleeves when it comes to quickly approximating, with just a quick glance, when cards were produced. With a little practice, you can do it too. Although the very earliest postcards were sent in the 1860s, picture postcards began a bit later. Postcard collectors always refer to the address side as the back, and the picture side as the front. 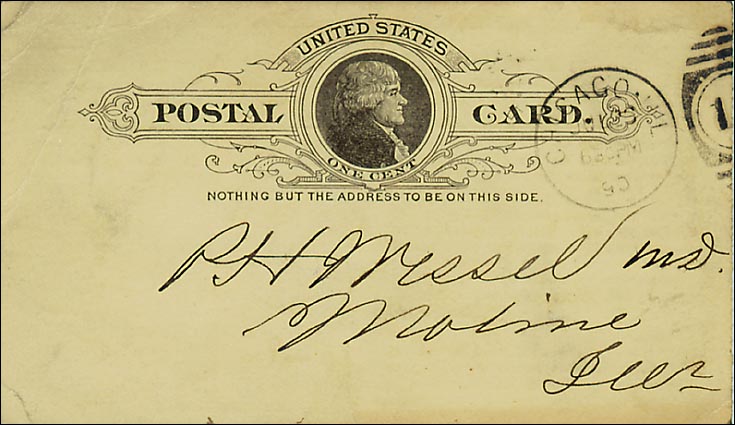 This example of a Pioneer Card has a government Postal Card back and is postmarked 1890.

Pioneer Cards (1893-1898) are also known as Souvenir or Mail Cards. They got their start at the 1893 Columbian Exposition in Chicago and marked the first time visitors could send a peek of the sights from their trip to people at home. Pioneers have a U.S. government Postal Card back, and room for the sender to write a message on the front.

PMCs or Private Mailing Cards (1898-1901) began when an act of Congress allowed the private sector to print and sell postcards. The words “Private Mailing Card” are printed on the back, and there’s a small space set aside on the front to write a message. Pre-1901 postcards in excellent condition are scarce. 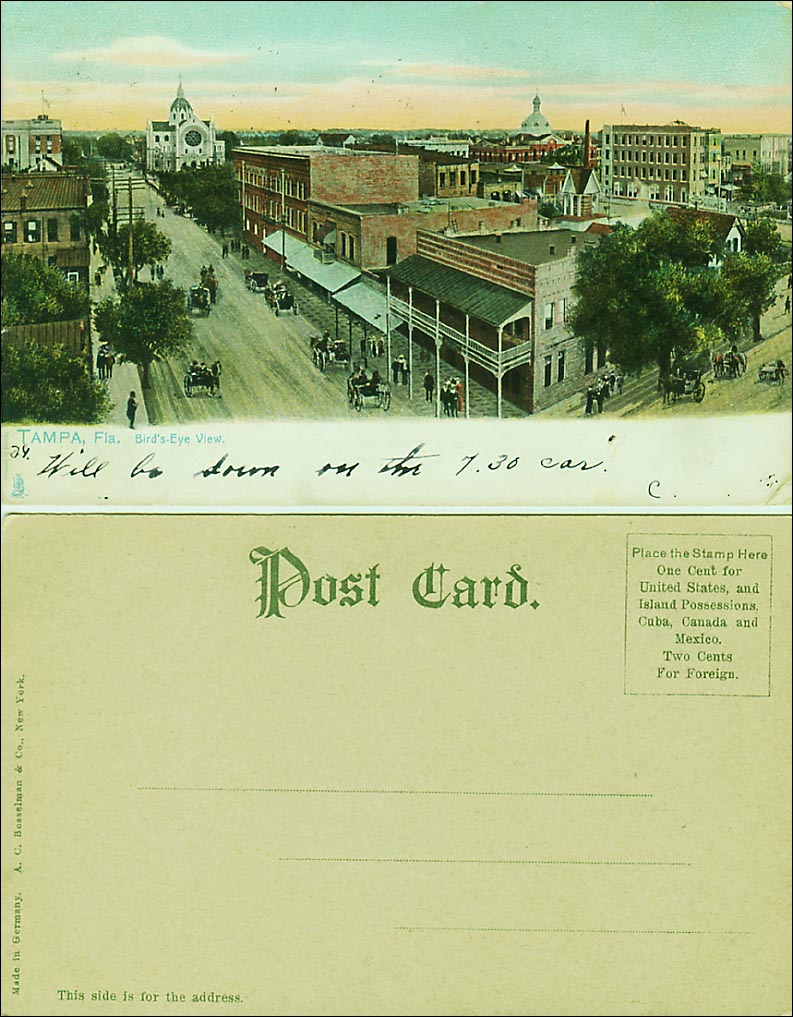 Viewed from the front, this Undivided Back scene of Tampa, Florida. with horse-drawn carriages has a typical white margin for the writer’s message. The back,  from a different postcard, allows only the address.

Undivided Backs (1901-1907) were the first to have the words “Post Card” on their backs, which were still reserved exclusively for addresses. Messages had to be written on the front, and you often see a wide white margin for that purpose. Real Photo postcards began during this era, when photographers printed their pictures on paper with Post Card backs. Messages on the front, especially those related to the view do not lower the value of the cards. 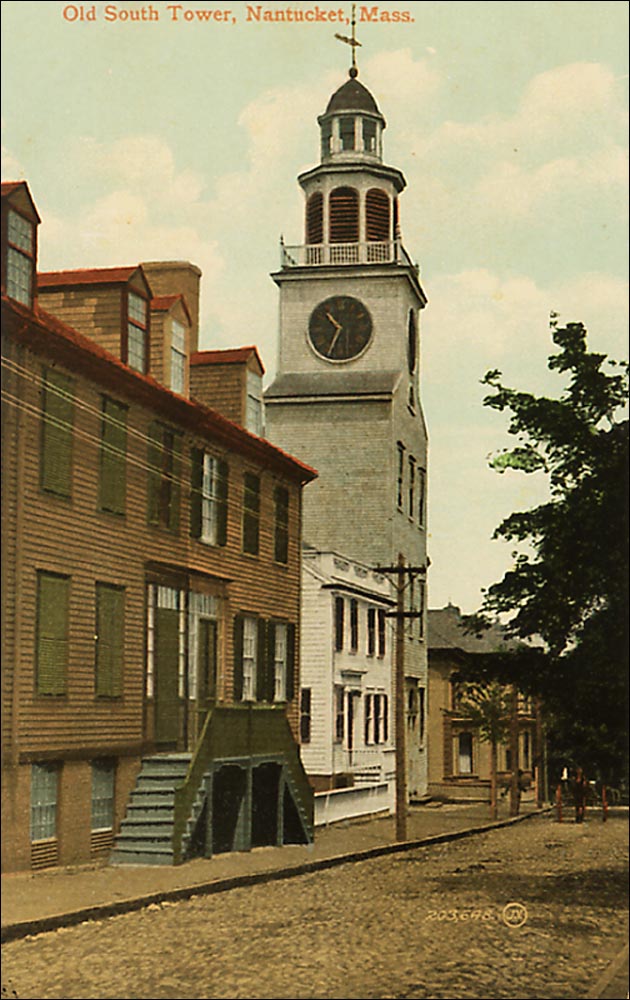 Note the cobblestone streets on this Pre-1920s postcard from Nantucket, Massachusetts. The card has rich colors and excellent lithographic quality. Pre-20s, as well as Undivided Backs, are highly sought by collectors.

Divided Backs (1907-1914), also called Pre-20s caused an explosion in postcard collecting. For the first time, the back side was divided in half, and senders could write messages without defacing the picture on the front. Britain allowed Divided Backs beginning in 1902. Millions were published, and this era is called the “Golden Age of Post Cards.”

You may find cards with messages showing exchanges between collectors in different parts of the world. And, since mail was often delivered twice a day, you’ll find postcards with messages such as, “I’ll see you around 4:30.” Prior to this period, most postcards were printed in Germany, which had outstanding lithographic processes. But during the First World War, the U.S. and Britain took the lead in postcard production. 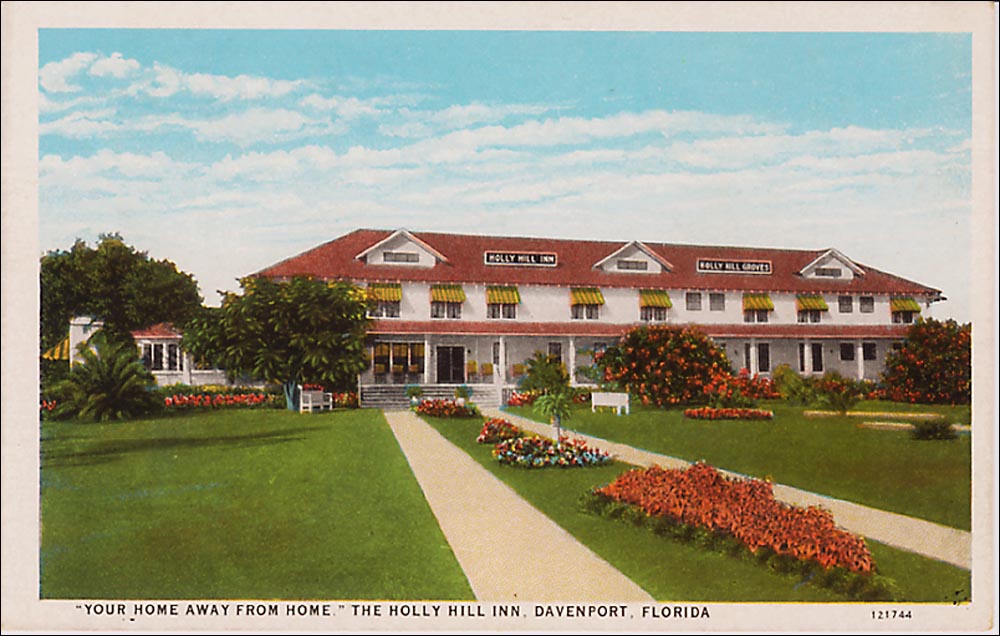 Typical 1920s White Border card shows “Your Home Away from Home,” the Holly Hill Inn, in Davenport, Florida. Colors are nice and crisp and the texture is smooth.

White Border (1915-1930) postcards are easy to spot, for the obvious reason. These cards, unlike their later sisters in the linen era, have a smooth texture. Average people began traveling more during this time, and White Borders often feature skyscrapers, natural wonders and social advances (such as large high schools, colleges—and even prisons and mental hospitals). The white borders were actually a way for printers to save ink, and the photographic quality was sometimes poor. 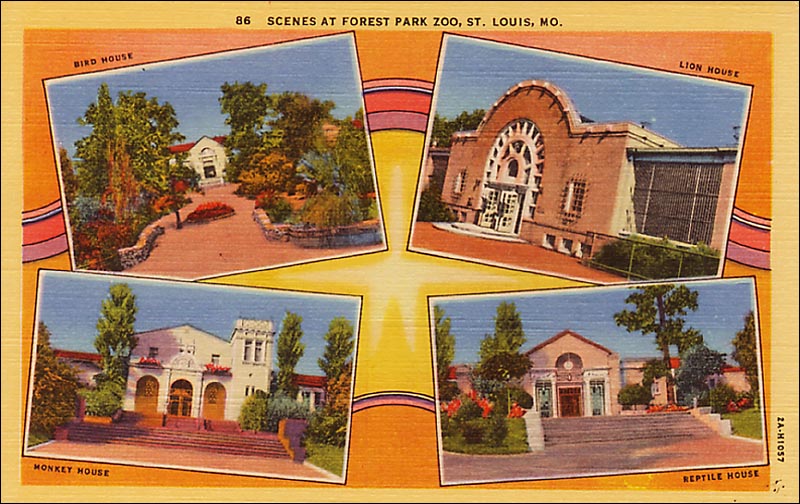 This multi-view of the zoo in St. Louis, Missouri, has that very garish look for which Linens are famous.

Linen (1930-1945) postcards have a coarse texture, so you can spot one with your eyes closed! The paper has  a high-rag content, making the colors very bright and often gaudy. Linens can have white borders or they can be “full bleed,” meaning that the picture extends all the way to the edges. 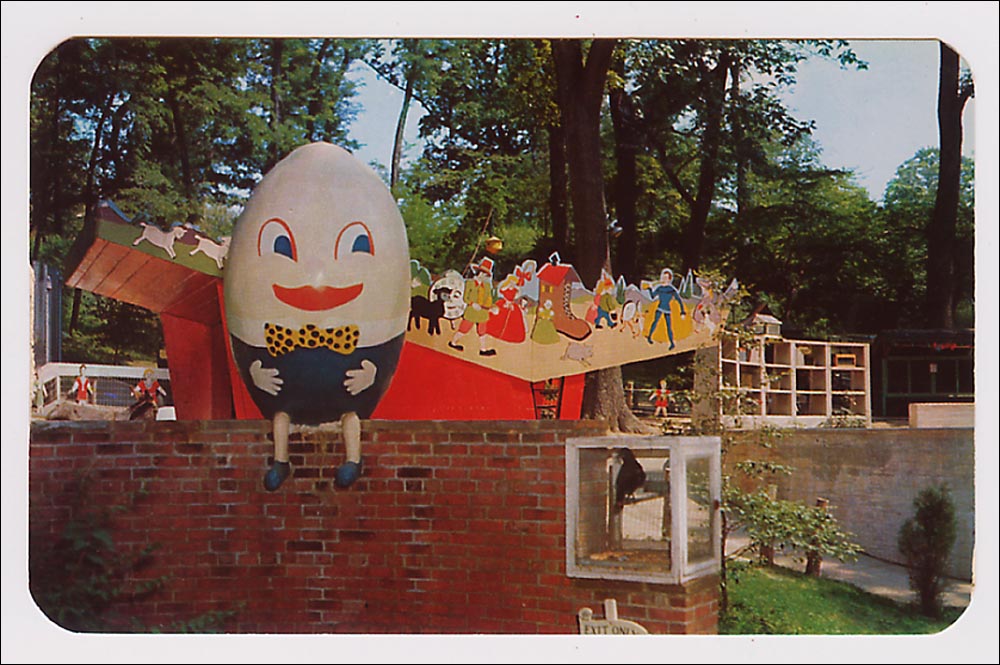 Rounded corners on this Chrome place it in the 1950s. Showing Humpty Dumpty at the Children’s Zoo in Wilmington, Delaware, cards of kiddy parks from this kinder, gentler era are often seen in auctions.

Chromes (1940-1970s), also known as Moderns are postcards made using the photochrome printing process, and you can see the telltale dots under magnification. They have a glossy finish, and are “standard size” (3½” x 5½”). Chromes are not “real photo” postcards, though they’re often incorrectly described as such at auctions. Those with rounded corners were made during the 1950s. Chromes are gaining in popularity.

Continentals (late 1960s – present) are also called Moderns, but are 4” x 6” in size. The printing process is the same as Chromes. If cards of this size are European, they may be much older than this. Early Continentals sometimes had deckled edges (they look like they were mass-cut with pinking shears); these cards often have colors that look faded. Continentals are a bit too new to be very valuable, but some topics (such as roller coasters, defunct roadside attractions and areas dramatically changed by natural disasters) are very collectible. 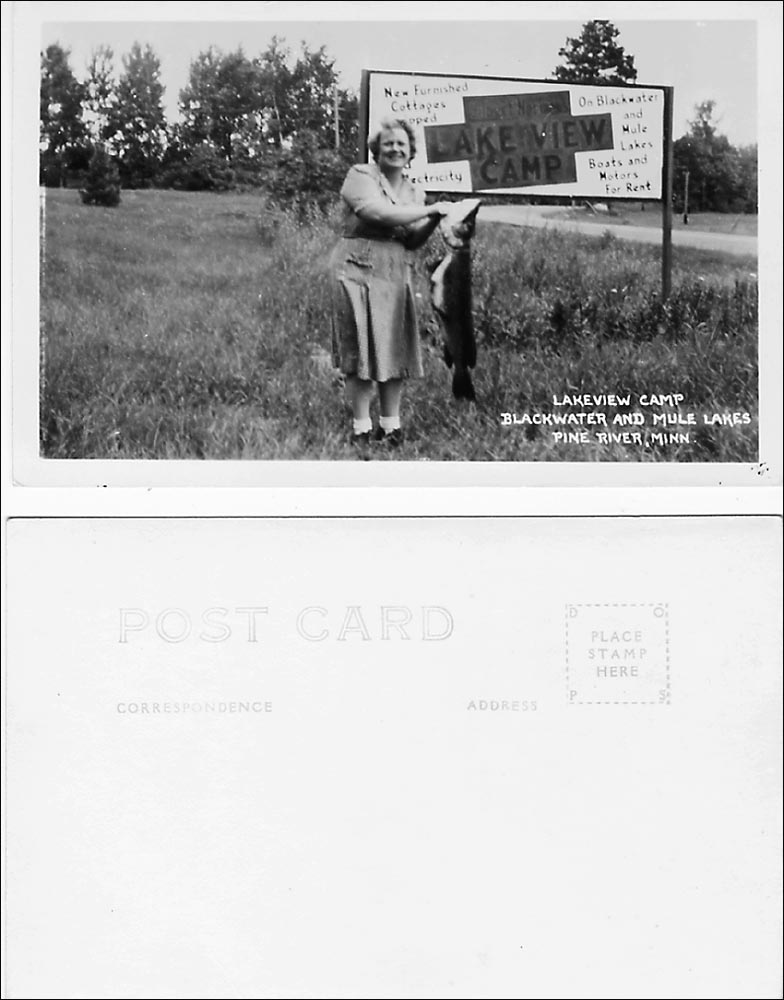 This RPPC of a bobby sox-clad woman, holding up the big fish she caught, touts Lakeview Camp in Pine River, Minnasota. Note the typical white handwritten caption. The back carries a DOPS stamp box (look for the D.O.P.S. in the corners). A bit of research shows that DOPS photographic paper was used in the late 1930s-1940s.

Real Photos, also known as RPs or RPPCs (real photo post cards) were made throughout the 20th century. An actual photograph was taken and developed, and a caption was handwritten or scratched on the negative (which is why they’re white). Then the photo was printed on postcard-size photo paper. The stamp boxes almost always show the identifying mark of the photographic paper producer. Under magnification, you will not see the dot pattern that characterizes Moderns. Some RPs were mass produced, and you’ll notice neater, more professional captions on them. Due to their uniqueness, pre-1920 RPPCs in excellent condition often sell well. [Editor’s Note: It is often the case that a hand written inscription identifying the people or place of the image will enhance prices.]

Of course, there are other clues to dating postcards—like postmarks. But don’t be fooled; you can still mail an Undivided Back using today’s postage rate. Study the front for clothing styles, types of transportation and what the buildings looked like. Are the streets paved, cobblestone, or dirt? Are there trolley tracks?

Check the descriptions on the backs for clues too. How many digits does the phone number have? Does the address have a zone number (used from 1943-1962)? Or a ZIP code (ZIPs started in 1963)? Google the name of a store, school or building to see if you can learn its history.

Beware the term “vintage,” as all it means is “of the era” (meaning the card isn’t a reproduction). It doesn’t mean that the postcard is old . . . there are tons of “vintage 2000” postcards out there!

And a caveat—rules are meant to be broken, so you’ll come across a few postcards, from time to time that do not follow these guidelines. The vast majority will though, and you can amaze your friends and “talk the talk” with fellow collectors by remembering these simple dating techniques.

PrevPreviousThe Dr. S. F. Smith House
NextBlind Willy JohnsonNext
Bonnie Wilpon is the author of Postcard History of Sarasota and Bradenton, Florida and Postcard History of Hollywood, Florida (published by Arcadia Books) and is a postcard dealer and collector in Tampa, Florida. She is Membership Chair of the Sunshine Post Card Club and a Contributing Editor for Postcard History. Bonnie can be contacted at: bonnpon@att.net.
9 Comments
Oldest
Newest Most Voted
Inline Feedbacks
View all comments
Mary Schaefer

Thank you for such a clear description of how to identify cards. I had a general idea of how old cards came about but it is so much better to have it all spelled out in one place. I will use this article as a reference.

I enjoyed learning about the history… Thanks…

Thanks for sharing these dating techniques. However, one small issue that you might want to revisit. Under the Divided Backs section (1907-1914), you wrote: Prior to this period, most postcards were printed in Germany, which had outstanding lithographic processes. But during the First World War, the U.S. and Britain took the lead in postcard production.” World War I began in the second half of 1914. Until that point, I believe most postcard production was still handled in Germany. Based on my collecting experiences, I would say that much of the postcard manufacturing didn’t shift to the US until 1915, which… Read more »

I wouldn’t disagree with you. 1915 is “during the First World War” and this is when many more postcards began to be printed in the U.S. which actually began printing them before the War. Sadly, the poor print quality of the white border postcards of the late teens and early 1920s has made them less sought after than pre-20s or later cards printed in the linen era. Happy collecting!

Great article. For those who like to “split hairs” I would like to add an additional caveat for Pioneer Cards. That period is often divided into 1) Early Pioneers: 1872- 1892 and 2) Late Pioneers: 1893 to 1898. Those private card issued before the government postal cards were released in May 12, 1873 are called Forerunners. Believe it or not private cards were used by some US companies as early as 1845 and one company – a fire insurance company in Philadelphia – mailed private cards from 1866 thru 1871 as reminders of policy expiration. FYI

Opps I forgot one other thing about Pioneer cards that is important – they all do not have a US government back (printed indicia). The scarcest Pioneer cards are from private publishers (Mail card or Souvenir Card backs) and required a 2 cent stamp to mail – if with a written message, or a one cent stamp if with a printed advertisement. US Government cards required one cent to mail regardless if a written message or printed ad. For example during the Columbian exposition in 1893, the most famous fair cards are from Goldsmith publisher and were printed on Government… Read more »

Although I know the basic information by now, I always read such articles as this to see which cards are used to illustrate the styles of the various eras.