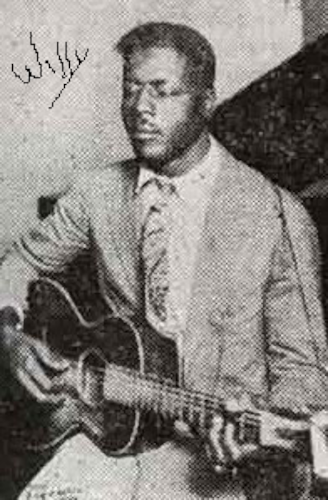 The only known photo of Blind Willy Johnson. This postcard appeared during National Postcard Week 1995 – 50th anniversary of his death.

William Johnson was born in Marlin, Texas. Marlin is a city in East Texas about a hundred miles northeast of Austin, the state capital.

Willy never knew his birthday, but guessed it was about 1902.  (Willy’s birthday was established much later in his life as January 25, 1897.)

Neighbors of young Willy often thought of him as an “unfortunate” because he was a victim of abuse and parental neglect. His step-mother’s tirades were events of legend in Marlin. For a few years, in the 1920 the sheriff’s department kept extra staff on duty to quell Mrs. Johnson’s harangues.

.Young Willy was always an active participant in his church and even as a child had admitted to a desire to “preach the Good Book to all who would listen.”  After his injury Johnson knew he couldn’t serve his church as a preacher so he turned to music and he honed his talents to produce outstandingly powerful religious music.

As he played for tips on the streets, Willy earned a reputation as a popular “sanctified” singer.  In 1927 when he was asked to record his music on the Columbia Records label, he gladly moved to Dallas and became the most recognized African-American to record in the pre-World War II era.  Working under the name, Blind Willy, his dynamic singing and dazzling guitar work ensured him a future and he continued to sell records even into the Depression.

Despite his self-imposed commitments to his church there may have been a secular side to his music.  In recent years musicologists have been researching the probability that recordings found recently in Texas, issued under the pseudonym of Blind Texas Marlin, are indeed Willy Johnson’s.

The first release of Johnson’s music was an instant success, selling more than 15,000 copies.  Between 1927 and April 1930, Johnson made thirty tracks for the Columbia Record Company and maintained a level of quality that is amazing even by today’s standards.

Johnson lived his later years in Beaumont, Texas, and it was there that his house caught fire sometime in the late 1940s.  Johnson survived the fire and returned to the house and continued to live in the burned-out dwelling, sleeping on a wet mattress covered with newspapers. Being without proper shelter, his physical health waned quickly and he died from pneumonia in 1945.

Nearly six decades after his death, I Know His Blood Can Make Me Whole and Dark Was the Night and Cold the Ground, among many more of Willy Johnson’s songs are still available is music stores.  Look for Johnson’s music in the Blues Section of your favorite record CD shop or on YouTube.com.

I never heard of this man until just now. Quite a story of triumph and tragedy.