The Red Cross was founded by Henri Dunant, who was present at the Battle of Solferino in 1859, at which 40,000 men were killed or wounded.

Dunant spent the next five years trying to get support for his plan and succeeded in convoking a convention of interested persons in Geneva, Switzerland in 1864.

After the disappearance of his fortune, spent in promoting the idea from which the Red Cross grew, Dunant lived for years in poverty in Paris, then disappeared completely.

Bertha von Sutter, well known as a pacifist, who had been Alfred Nobel’s secretary, ‘discovered’ Dunant when he was a very old man living in the poor house of the little Swiss village of Heinden. Through her efforts he was awarded the first Nobel Peace Prize in 1901. He gave the money to charity.

Red Cross topical postcards are very popular. In addition to the various Red Cross drive promotion cards there are cards that were printed during World War I and World War II for service men’s use.

A good example of a World War I Red Cross card can be seen here. The picture side is that of French General Marshal Joffre. On the message side one Standick Howland has written a Thank you note to his dear Aunt Julia. It is dated March 4, 1919. Please note that to be an authentic Red Cross postcard, the “red cross” must appear at the top-center of the address side.

Now I wonder, the Red Cross is not top and center? Paris WW II card. Thanks for the history and referencing Henri Dunant 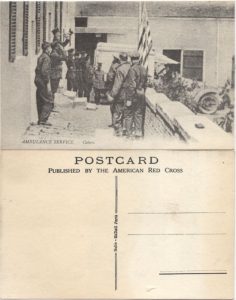