All the Single Ladies

Today most young women know that they can get an education and launch a fulfilling career. They can choose to marry or not, have children or not and be self-sufficient. The course of their lives depends mostly upon themselves—not upon getting married to a man to take care of them.

That was not the case in the early 1900s. In those days, except for the rare rich widow or spinster relative in a wealthy family, a single woman had no way to support herself.

It’s easy to understand why a woman might be desperate for a husband to support her in the early 1900s.

Girls went to school less often than boys, dropped out at a younger age and were prohibited from attending most universities. Their families often preferred that they stay home and help take care of the house and younger children and saw no point in book learning for their daughters, who would soon become wives and mothers. 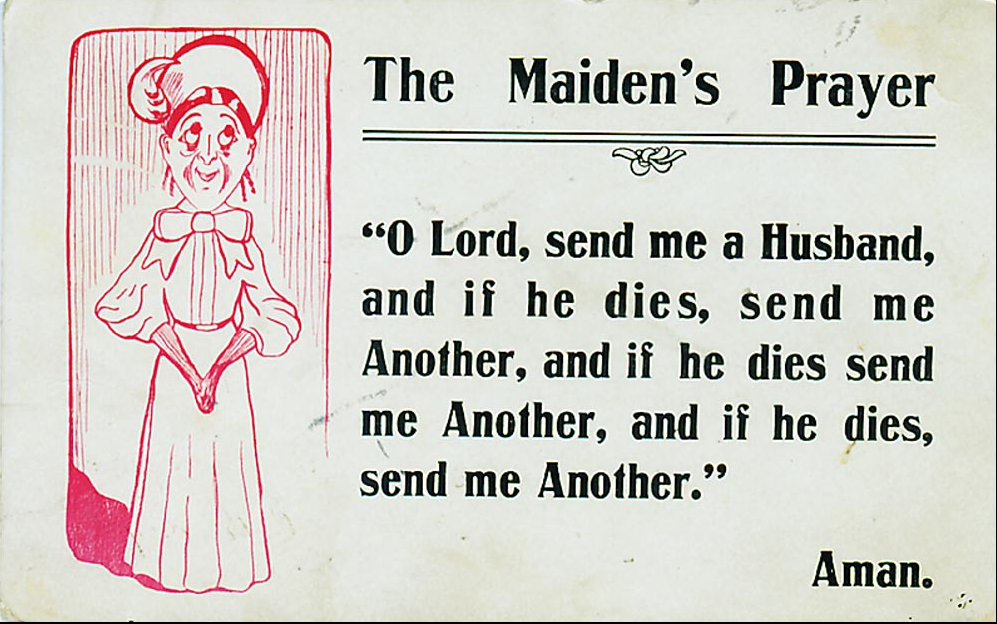 This 1907 postcard sends a plea for as many men as it takes. There are several versions of the Maiden’s Prayer, and while not too common, they can be found at shows and online.

If she were lucky, a single woman might find work as a servant or shop girl; professions were out of the question. When parents died, their money and possessions were most often left to their sons. Occasionally a daughter might inherit a small percentage.

The “old maid” was the brunt of pity and disapproval in her community. In mainstream life, women were expected to catch a husband and have children. Those who didn’t were seen as failures, not good enough, or rebellious – a trait not valued in females.

Women were raised to believe that being a wife and a mother was required in order to be happy and truly feminine. Without following that life path, women often found that they had no female, personal, or social identity.

As the 20th century progressed, so did the lives of unmarried women. The flappers of the 1920s showed the world that women could put themselves in the spotlight without being shamed. During World War II, women were called upon to work, which led to the ability of women to become independent, both socially and financially.

As women found that their own identities didn’t have to be linked to a man’s, they became more outspoken about not needing one. “A woman without a man is like a fish without a bicycle,” became a feminist mantra during the 1960s.

In this 21st century, single women are the fastest-growing segment of the American population. The U.S. Census Bureau reports that 42 percent of adult women have never married or are divorced or widowed.

Postcards have poked fun at single women throughout all of these changes. Let’s take a look: 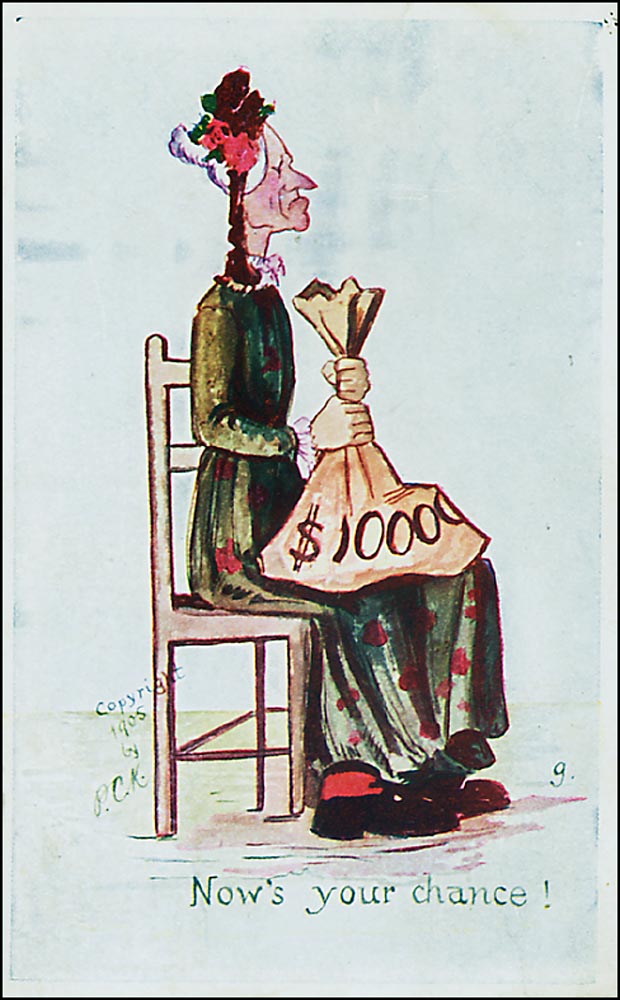 Even a wealthy woman wanted to be married to escape the social stigma of being an outcast. This 1905 postcard, from the Paul Keeber Company of New York City, shows a spinster hoping to attract a man with her money. 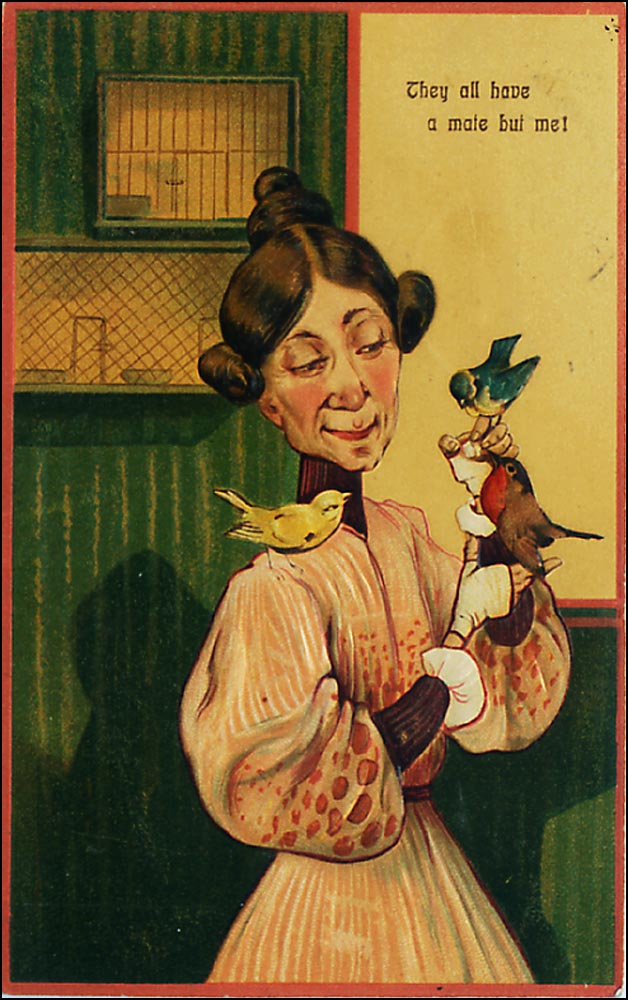 A sweet and plaintive lament, “They all have a mate but me!” This lovely embossed postcard shows a woman with her pet birds who is the stereotypical spinster, with her severe hairdo and high-collared prim dress. 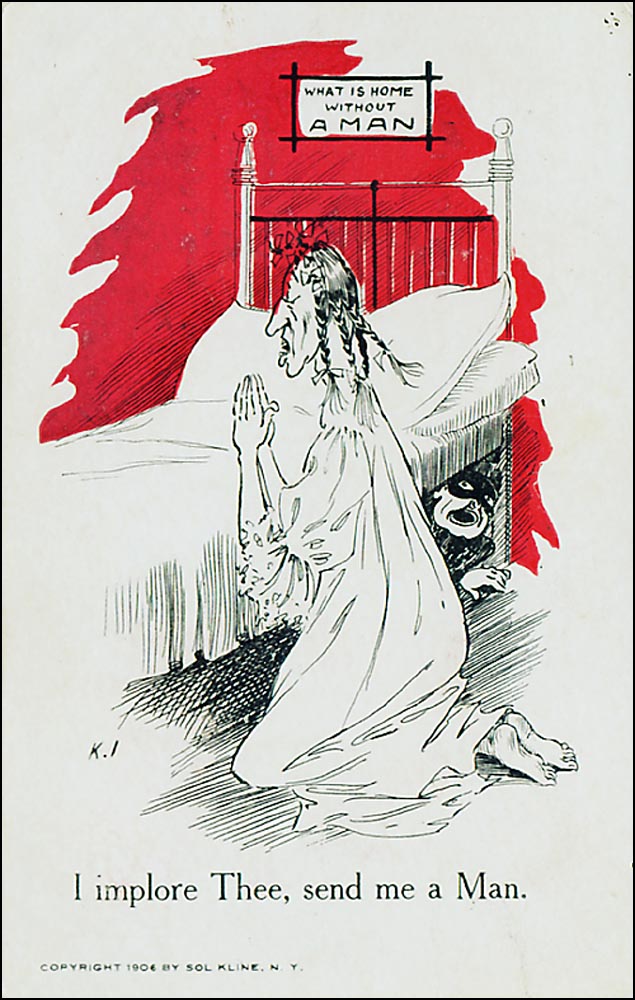 From artist Sol Kline comes this 1906 comic “old maid” postcard. A common thread in this collector category is the spinster and the criminal; here we see him hiding under the bed. Is she so desperate that she’ll take any man? Or is the big daring robber so afraid of her desperation that he doesn’t want her to find him? 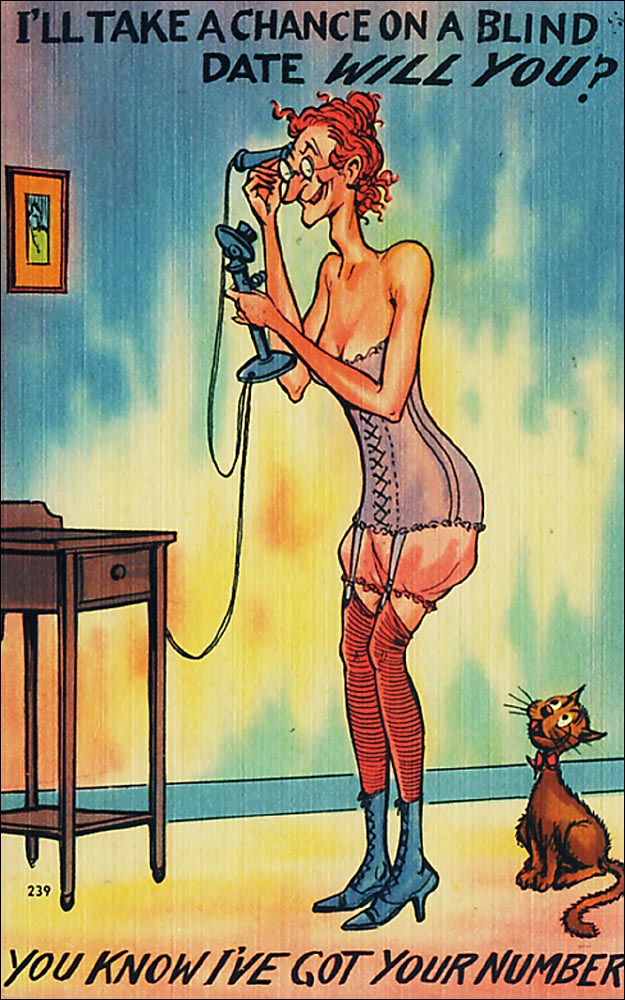 The working women of the World War II years of the early 1940s portrayed unmarried women as taking a bit more control of their lives. This is a major social change, though this spinster is still less than lovely. 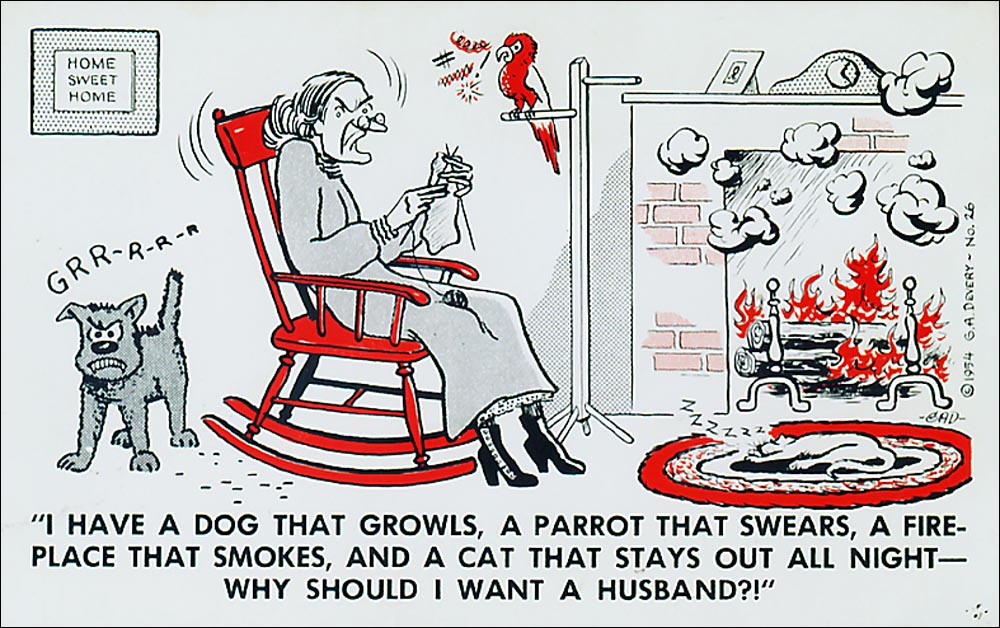 This 1954 postcard by artist G.A. Devery shows the tables turning, along with the times. “Why should I want a husband?” remarks this woman, comfortable in her rocking chair in front of the fire.

Bonnie Wilpon is the author of Postcard History of Sarasota and Bradenton, Florida and Postcard History of Hollywood, Florida (published by Arcadia Books) and is a postcard dealer and collector in Tampa, Florida. She is Membership Chair of the Sunshine Post Card Club and a Contributing Editor for Postcard History. Bonnie can be contacted at: bonnpon@att.net.
PrevPreviousAn Unassuming Postcard has Historical Significance
NextCarpenters’ Hall, Philadelphia, PennsylvaniaNext
0 Comments
Inline Feedbacks
View all comments
0 0 votes
Article Rating
Menu