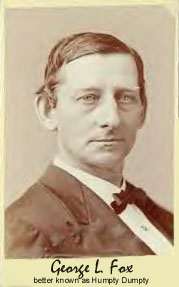 I discovered this card some years ago. I have no idea where or when, and I have been pushing it around my desktop for a long time.

I had no idea who George L. Fox was.  He had a look of a Civil War general, but generals’ pictures were taken while in uniform.  Then I thought perhaps he was a lesser known politician; wrong again! Then I read the bottom line, “better known as Humpty Dumpty” that did it.  I was about to put it back, but on second thought I had to learn more about this man.

As it turns out, George L. Fox was a clown.  Come to think, maybe I wasn’t that far off when I thought him to be a politician.

Born in 1825, Fox was tagged early on in life with the nickname Laff, and Laff Fox was universally known as the American Grimaldi.

(Now, I wasn’t sure who Grimaldi was in this context, but with a little help from the Internet I learned that an Italian-English entertainer named Joseph Gramaldi was considered the first truly great pantomime.  Gramaldi never worked in a circus as did Fox, but performed only in full-length pantomimes.  He initiated the face painting that was to become a trademark among all clowns of the 19th century.  The cap-stone of Grimaldi’s life was that he was so well loved and influential enough in his time to have none other than Charles Dickens write his biography.)

Laff Fox had achieved the same America.  He introduced the Grimaldi style of violent slapstick and topical satire to the America stage, but added his own brand of American humor that frequently reflected current events.

Fox’s tour-de-force came in 1867 when he invented Humpty Dumpty.  His character was a distinctive American anti-hero often described as half Boss Tweed and half Krazy Kat.  The slapstick form known as pantomime was a Broadway tradition before the Civil War, but it reached a peak of popularity during the 1860s and 70s.  The most popular of the shows placed characters from Mother Goose rhymes in wildly varied settings, always finding an excuse to transform them into clown characters from the commedia dell’ arte.  Songs of the day were often used as intermissions when the audience needed a breather. 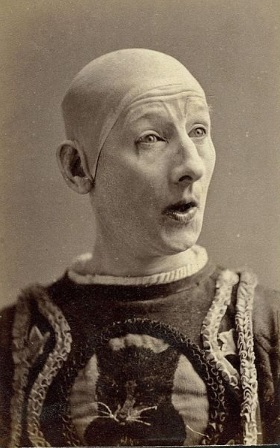 For Fox the plot had Humpty and his playmates turn into characters that would romp through candy stores, or enchanted gardens or even Manhattan’s very costly new City Hall.  Fox’s mute passivity set him apart from the raucous clamor surrounding him, and audiences took the little man to their hearts.  Humpty Dumpty was revived several times within the decade and Fox, who had become the most highly paid actor of his era, eventually gave 1,128 performances in that title role.  Strange as it may seem, anyone who has ever attended a Broadway Wednesday Matinee performance has George Fox to thank.  He initiated the tradition of Wednesday matinees to take advantage of the show’s

Fox was considered by many to be the funniest man of his time.  His white face character became an important part of popular American imagery, being used in advertisements and children’s books long after his death.  He is considered an influence on early film comedians the likes of Stan Laurel, Oliver Hardy, Charlie Chaplin, Buster Keaton, and some of the Marx Brothers.

Sadly, he was carried from the stage during his last performance.  He collapsed of exhaustion and was taken to an insane asylum.  He died in 1877 of poisoning from his lead based white make up.