The Mystery of
a Great Work of Art 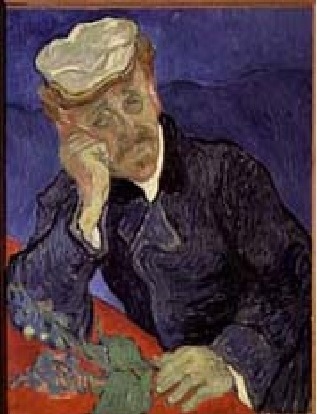 In June 1890, Vincent Van Gogh, wrote: I’ve done the portrait of Mr. Gachet with a melancholy expression, which might well seem like a grimace to those who see it….  Sad but gentle, yet clear and intelligent, that is how many portraits ought to be done.

In less than three minutes, on a mild, May evening in 1990, Vincent van Gogh’s Portrait of Dr. Gachet became the world’s most visible work of art, only to vanish from view – its whereabouts still a mystery.

About 7:45, the rich, poignant likeness of Paul-Ferdinand Gachet – a Dutch physician – debuted in front of a packed salesroom at Christie’s Auction House in New York.  The bidding started at a respectable $20 million and rose swiftly in increments of $1 million, as if the bidders were proffering Monopoly money.  48 million, 49 million, 50 million.  The room erupted in shouts and applause; bidding was furious.  73 million, 74 million, 75 million. The gavel finally came down, making art-world history.  An unassuming Tokyo art dealer acquired Portrait of Dr. Gachet on behalf of an unknown client, for a total of $82.5 million ($75 million, plus a 10 percent buyer’s commission).  The record hammer price topped the previous champion, Van Gogh’s Irises, by some $30 million.

The masterpiece went straight from the limelight into a foam-padded packing crate and was shipped to a top-secret storeroom somewhere near Tokyo.  Gachet‘s new owner, Japanese industrialist Ryoei Saito, spent a few hours with his purchase, and then locked it in a climate-controlled vault.  And there it stayed, untouched and unseen, for seven years.

While the painting rested in its hiding place, Saito struggled, financially and otherwise.  In 1993, he was charged with trying to bribe officials to allow the development of a golf course, which, ironically, was to be named Vincent.  Wheelchair bound and broke; Saito pleaded guilty and received a three-year suspended sentence.  During this time, he scandalized the art world by stating that he wanted Van Gogh’s masterpiece cremated and buried with him upon his death – though he later said he was only joking.

No one laughed, especially after Santo’s death in 1996, when it wasn’t clear who owned the Gachet painting or even where it was.  Museum curators and auction houses tried to locate it, but while representatives of Saito’s company assured the world that it was still around, a veil of secrecy shrouded all future transactions.  Gachet simply seemed to vanish.

Sadly, the mystery continues, Gachet, who wears what Van Gogh called “the heartbroken expression of our time,” has almost certainly left Japan for a private collection.  The person who owns it is just not interested in advertising the fact, most likely because of all the notoriety.

But where is it?  Some say New York, some France, and some Switzerland.  “People are just speculating.”

New York art dealer Richard Feigen, who has his own theories about where it’s not, says, “If the painting came to the United States, there would be people who knew – shippers, customs people.  It couldn’t come in an unopened crate and go right into storage, like in Switzerland.”

Rumors still fly, says Cynthia Saltzman, author of the definitive book on the mystery, Portrait of Dr. Gachet: the Story of a Van Gogh Masterpiece, Money, Politics, Collectors, Greed, and Loss. In writing her book, Saltzman tracked only dead ends.  “[People] would say, ‘Oh, I heard it from this person in Japan who heard it from that person in Singapore,’ ” she explains.

Lost in all the gossip is why it’s important to return the painting to the public domain.  Gachet is not merely the world’s most expensive painting; it is an important part of Western Civilization that is lost.

Postcards of Van Gogh’s paintings, like the one here, as well works of hundreds of other artists are usually museum reproductions and are easily found with most dealers.  The price range is $1 to $5.00.