Quilts for a Cause 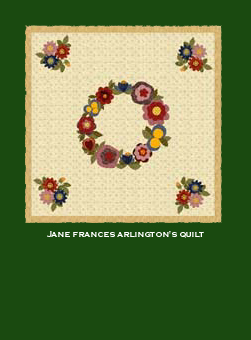 On a recent trip through Montgomery, Alabama, Ray and I made a stop to see the first Confederate White House.  In an upstairs hallway I came across a quilt hanging on the wall that had a floral arrangement (fussy-cut and appliquéd) in the center with smaller versions of the design in the four corners.  It was on a white background.  The hand stitches were perfect.

What caught my eye was the term “Gun Boat Quilt” on the wall label.  The term fascinated me and drove me to check it out on the Internet.

I learned that “Gun Boat Quilt” was a term given to the raffle quilts made by southern women in order to finance the building of gun boats needed during the Civil War to protect the ports of the southern states and the shipping lanes in and out of southern harbors.

The quilt hanging in the Confederate White House, a fine example of a broderis perse flowered motif, is known for helping finance the building of the gun ship CSS Alabama.  There were other states that had such raffles and from what I read, one such ship known as a petticoat gun boat, was entirely financed by quilt raffles.  There is even one quilt that was donated back to the ladies to be re-raffled for the “cause.”  Would you think it possible that one quilt could have financed an entire ship?

The women of South Carolina raised 15% of the $200,000 price tag on the CSS Palmetto State.  Women of the North also had quilt raffles but not for the purpose of building gun boats.

Even though the south raised cotton, they did not produce cotton cloth on a large scale. Once it became difficult to get supplies through the blockade, women used dress and curtain material for their quilts.  The hand sewing of quilts was not a customary skill learned by the genteel ladies of the south, because their slave seamstresses would have been responsible for most needlework of this kind.  Southern women of means however were well versed in, and quite capable of, fine embroidery and paper piecing.  These skills would have been taught in finishing schools and in the homes of young women, therefore in that time of war, they soon learned to adapt their skills to quilting.

When it became obvious that the war was not going to end as soon as it had been thought, and that the blockade was being successful, the women changed their sewing sights to making quilts for their soldiers.  Both women of the north and the south began making quilts 4 feet by 7 feet — the dimensions of the average soldier’s cot.  There is an estimate that at least 250,000 quilts were made during the war years.  Hard use and the fact that many soldiers were buried in their quilts account for the fact that there are very few left.

You can date some surviving quilts by the fact that near the end of the war (circa 1864-5) southern women used carded cotton as batting.  They kept their quilting stitches close together so the batting would not slip during washing.  When batting was no longer available some quilters even resorted to using newspaper.  Quilts that were “tied” because time was an issue were called “comforts.”  It is suggested that the modern term “comforter” comes from that era.

A few words about the illustration, it is not the quilt I saw in Alabama, but it is similar in design.  Ray found this card at the Shenandoah Postcard Show in Harrisonburg, Virginia. We have tried on several occasions to identify Jane Frances Arlington, but have yet to be successful.  All of the above information was found by using “gun,” “boat,” and “quilts” as key words in a google.com search.

Marie Hahn has served as president of the Garden Patch Quilt Guild for several terms throughout her retirement. Her career as a history teacher in her local school district lasted 34 years. As a quilter she has won the respect of her club members for her imaginative designs and her wonderful sense of humor. Marie has one daughter and is married to postcardhistory.net's editor Ray Hahn. Marie and Ray live in New Jersey
PrevPreviousThe Mystery of a Great Work of Art
NextThe Architecture of Mary Jane ColterNext
1 Comment
Oldest
Newest Most Voted
Inline Feedbacks
View all comments
Mary Schaefer

That is fascinating. Last year I took a course on horses in the Civil War where we looked at the gear carried by soldiers and horses. These quilts would have been bulky but probably weighed less than the wool blankets.