Stan Davidson died at his Massachusetts home in 2012 and left his postcard friends to wonder how we would ever replace him. So far, it hasn’t happened. If you knew Stan, you were aware that Stan was the most deliberate checklist writer of anyone in our hobby. He was born in Maine, educated at the Massachusetts College of Pharmacy and owned his own business. For more than thirty years Stan dealt in antique postcards at shows from Maine to Florida.

[Editor’s Note: It is with some hesitation that I write the following, but for the most part Stan Davidson’s checklists have been lost to the postcard collector’s world. We at Postcard History would very much like to re-publish his work for the modern collector. If you have one of Stan’s checklists, and you care to share it with your fellow collectors, please contact us via this email – editor@postcardhistory.net.]

A Checklist of Willard Bonte’s Tuck Postcards
By Stan Davidson

I started collecting the postcards of George Willard Bonte a few years ago. One by one the collection grew until it reached ten cards. Not knowing if I had all in the series I placed a permanent search on eBay.

A book entitled The Sandman Rhymes [H.M. Caldwell, © 1904] appeared in response to my search and I purchased it.  When the book arrived, to my surprise, I found illustrations on every page.  All are animated objects doing strange things that children must have enjoyed seeing.  While checking these images I found a sketch of an animated clothes-pin and a knife that looked familiar.  I checked the book illustrations against some postcards that I had put away some years ago and I found the same group of images on Raphael Tuck’s Coupling Pin Series published in the 1920s.

My mind started working overtime; I realized there was another series by Tuck that had some of the same attributes.  I then checked out the Garden Truck Series. These cards showed anthropomorphic vegetable-people talking to each other.  On close examination I found a strange cat like animal with a heart-shaped face that also appeared in the first series.

Yes, it’s the missing link.  My conclusion is that both series were done by Bonte.*

Good luck to all of you who decide to search for these cards.  I know you will enjoy having them in your collection. 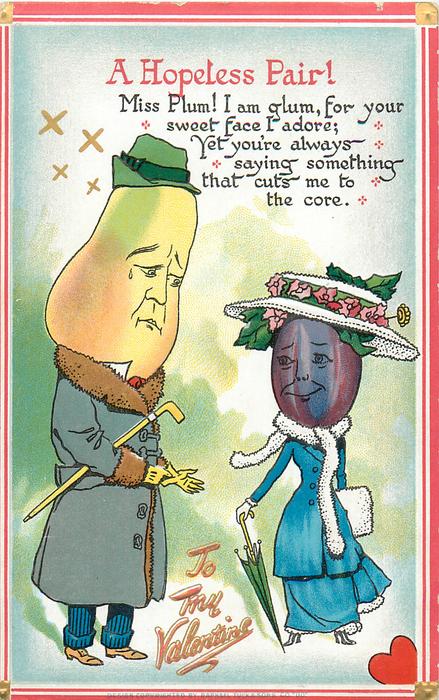 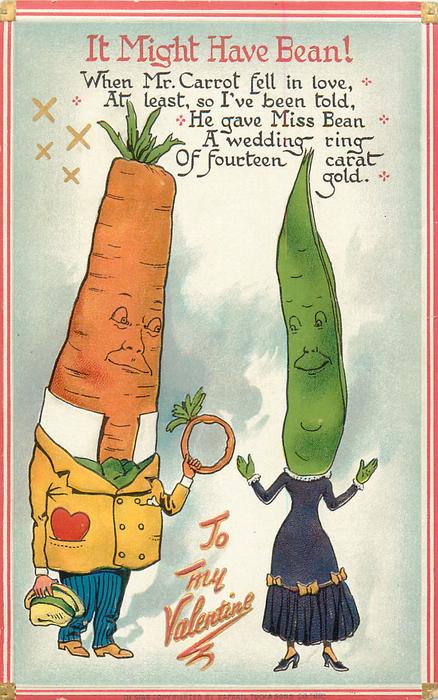 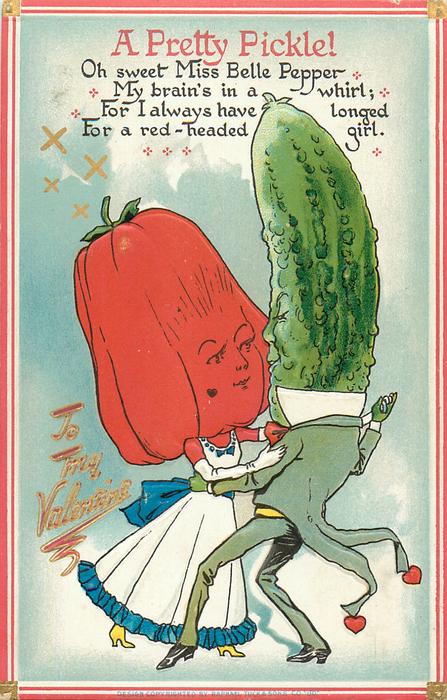 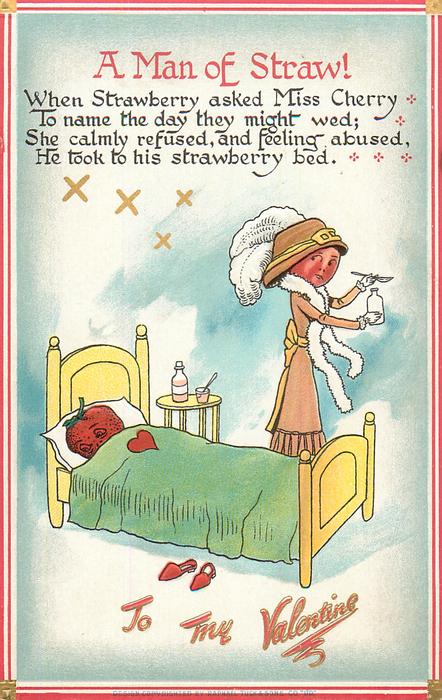 A Man of Straw! 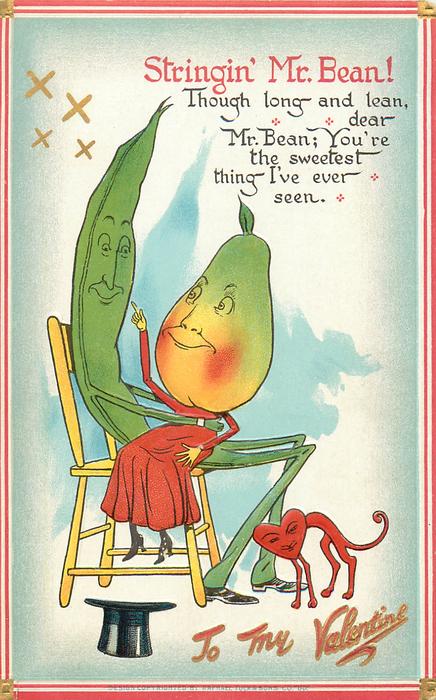 Checklist by
Stan Davidson
It Beats All! 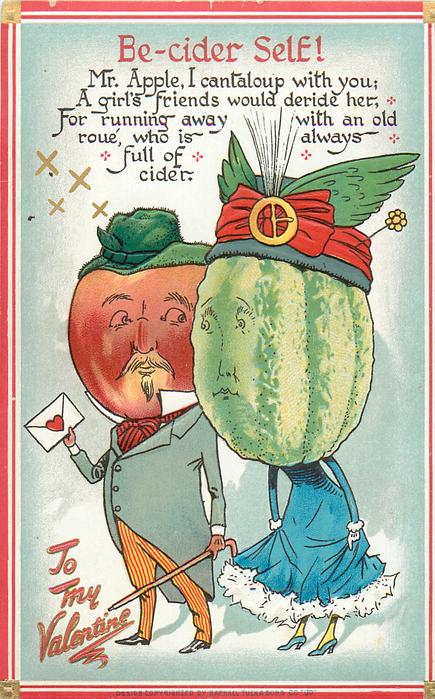 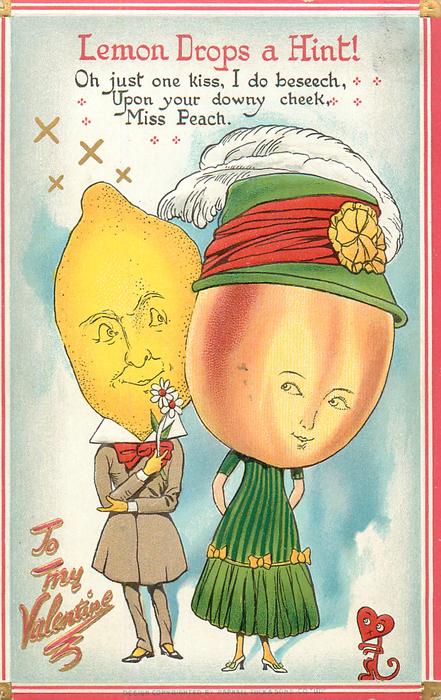 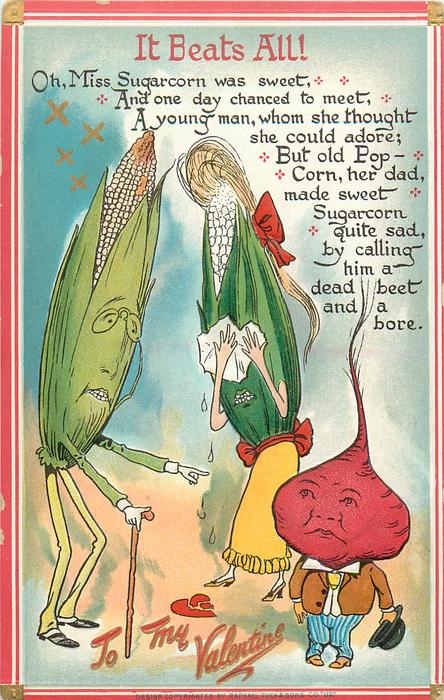 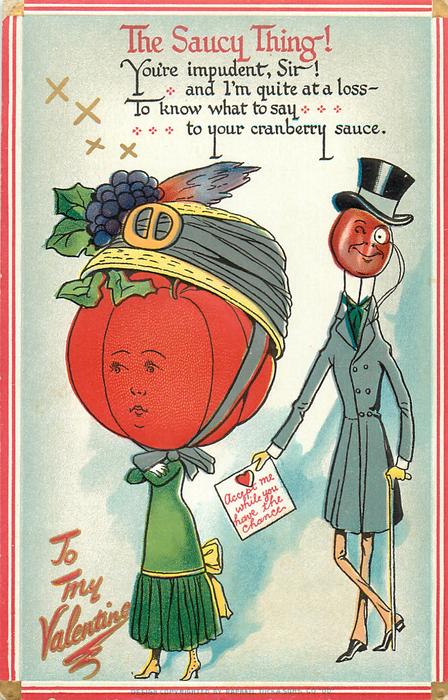 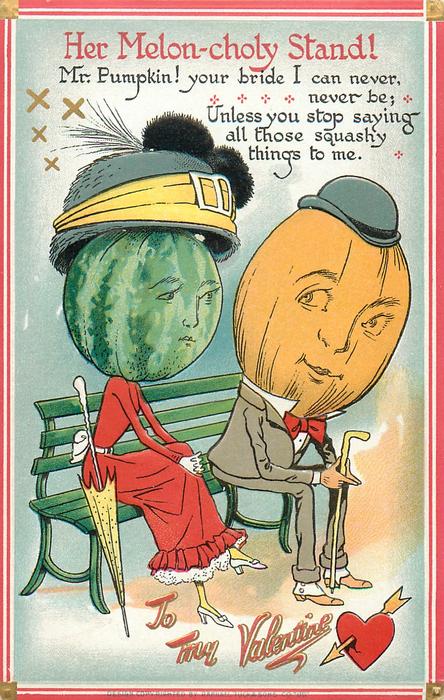 George Willard Bonte found solace in the unusual. He was an author, artist, poet, cartoonist and political consultant. He was a native of Cincinnati, Ohio, and completed his education at the Cincinnati School of Technology before moving to New York City in 1900 to assume the position of assistant art editor at the New York Herald. After his first six years in New York he advanced to editor of the art department and held that position until 1920. During 1912 and 1913, Mr. Bonte served in a dual role by adding the responsibilities of Sunday editor to his weekly routine.

G. W. left the newspaper business for new opportunities at the end of 1920. He then worked at doing illustrations and promotional pieces in the motion picture industry until 1936, when he retired.

One of Mr. Bonte’s favorite pastimes was the creation of original comic art and cartooning. As early as 1908 Bonte signed contracts with the Raphael Tuck Company at their New York office and in 1911 and 1928 at their offices in London. Research is incomplete but two famously popular sets were produced at Tuck’s. One of which, GARDEN TRUCK, TO MY VALENTINE was checklisted by Stan Davidson and is presented with this article.

Few of Bonte’s Tuck postcards are signed, but in lieu of signatures Bonte often used a cat-like character with a heart-shaped face as his signature d’artiste. 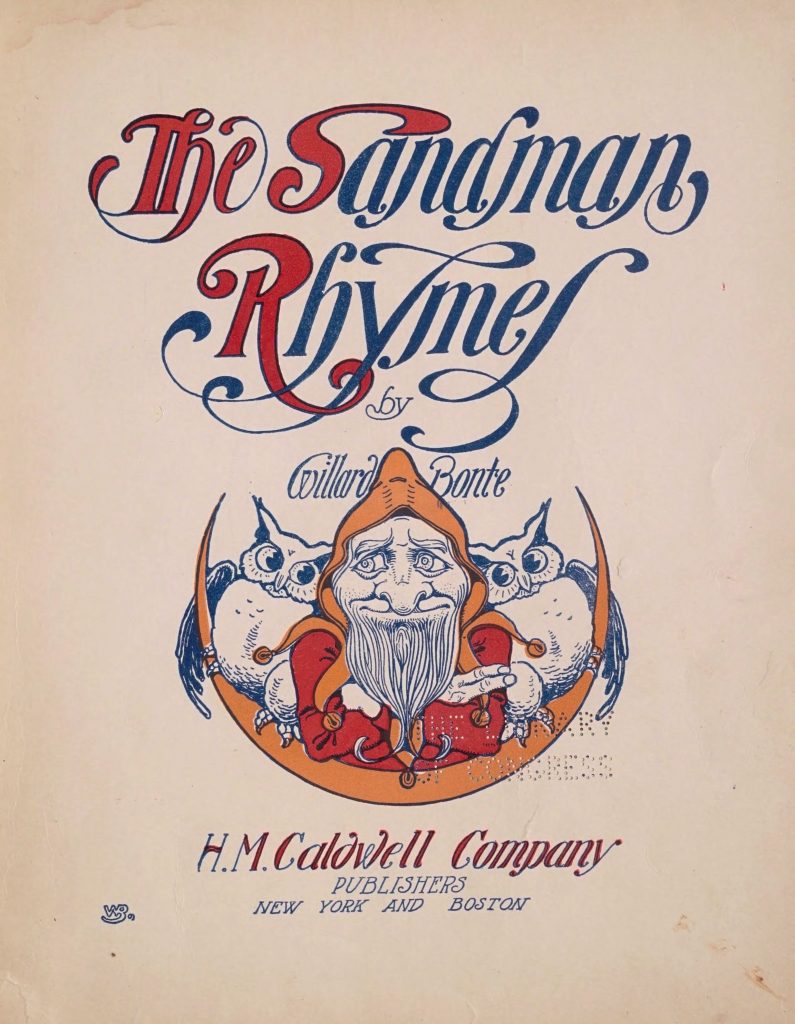 * New research has brought Mr Davidson’s conclusion back into conversation. After additional examinations of The Sandman Rhymes, (and other titles, i.e. The Mother Goose Puzzle Book by Willard Bonte and an ABC in Dixie: a plantation alphabet by Louise Quarles Bonte and illustrated by George Willard Bonte)it appears that these were undertakings by Bonte and his wife, using illustrations and rhymes which were likely created during the years before he accepted employment at the New York Herald. The Sandman volume was published by Herbert M. Caldwell & Company, of New York and Boston, which had opened their offices in 1896. In addition to his work at the New York Herald, he free lanced as a book illustrator during his early years in New York. By some means Bonte and his wife Louise were able assemble three of the most cherished children’s books of the era. The Mother Goose title and the ABC in Dixie title were published by Dutton.  All the art in these two titles was signed, mostly with a stylized WB and/or open-line B. All of his other artwork was published by Tuck in and after 1908.