their life and legends

Every so often I come across a set of postcards that captivates me. While the value of the set may be small, it’s the subject matter and the artistic rendering that make the grouping so lovely.

That was the case with these cards, part of a set of Tlingit Legends from the Sheldon Jackson Museum in Sitka, Alaska. These postcards are continental-size chromes and are sold at the museum’s gift shop.

Sheldon Jackson was a political leader and Presbyterian missionary who spent most of his life working in Alaska, beginning in 1877. Jackson was dedicated to the educational and economic progress of Alaska natives, as well as to their Christian conversion, and began many schools throughout Alaska.

Pronounced “KLIN-kit” in English, the tribe name means “People of the Tides.” The Tlingit Indians descend from the original people of the Pacific Northwest coast and now live in southern Alaska and Canada.

Tlingits are divided into two major groups: the Raven and the Eagle. Each has many clans, and their traditional crests are displayed on totem poles, canoes, house posts, weavings and jewelry. Today, many young Tlingits look to their traditional religions and worldview for inspiration, security and a sense of identity.

Let’s step back in time—to the days of the Tlingits of old. 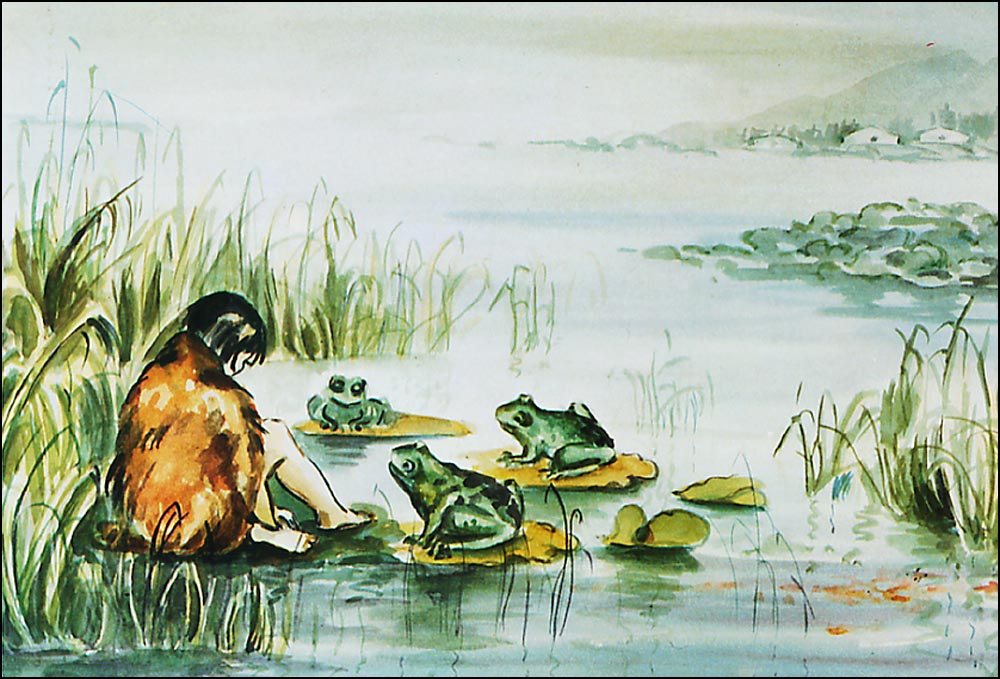 The Woman Taken Away by the Frog People: A girl was disrespectful to a frog. She was taken to the frog village and married to the frog prince. She was rescued by draining the lake, but she could no longer eat human food, so she died.

Members of our family are animists—we believe that individual spirits live in natural events like lightning and earthquakes and in objects. Our fathers are fishermen who catch seals and fish from their canoes or hunters who bring home caribou, moose, deer, goats and birds to feed us. The shamans cure our illnesses, help make rain for the crops, influence the success of the hunts, protect us from witchcraft and foretell the future. 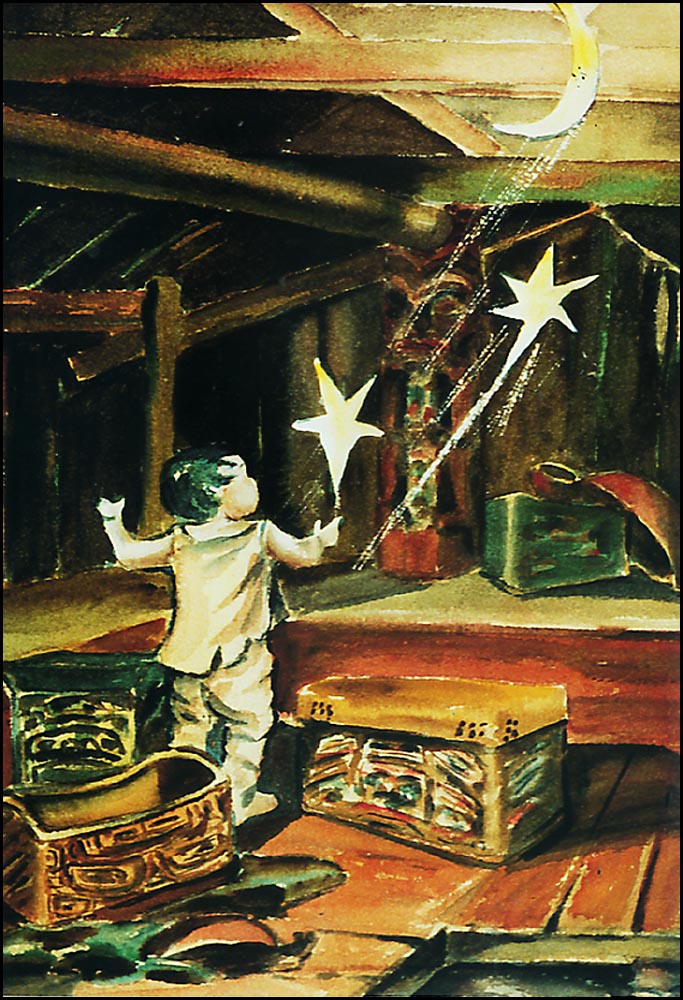 Raven Released the Stars and Moon: Raven was able to change his form to become the grandson of the important chief who possessed the moon and stars. He tricked the chief into giving these “playthings” to his grandson. Raven then released them to give some light to the world.

Our mothers gather berries and roots, shellfish and seaweed to eat, do all the cooking and take care of us. Even in winter, they prefer to go barefoot. Sometimes there are wars with other tribes, and our brothers and fathers fight to protect our families. Boys and girls, women and men are storytellers and create artwork and music.

We wear basketry hats made of woven spruce root with designs showing our status and family connections. We paint our faces and use different colors and designs for different occasions. Many of us have tattoos.

We live in cedar houses with roofs made of bark. They’re very long and rectangular, and each house shelters many families from our clan—as many as 50 people. Our claim to fame is our beautiful Chilkat blankets, woven from cedar bark and mountain-goat hair. 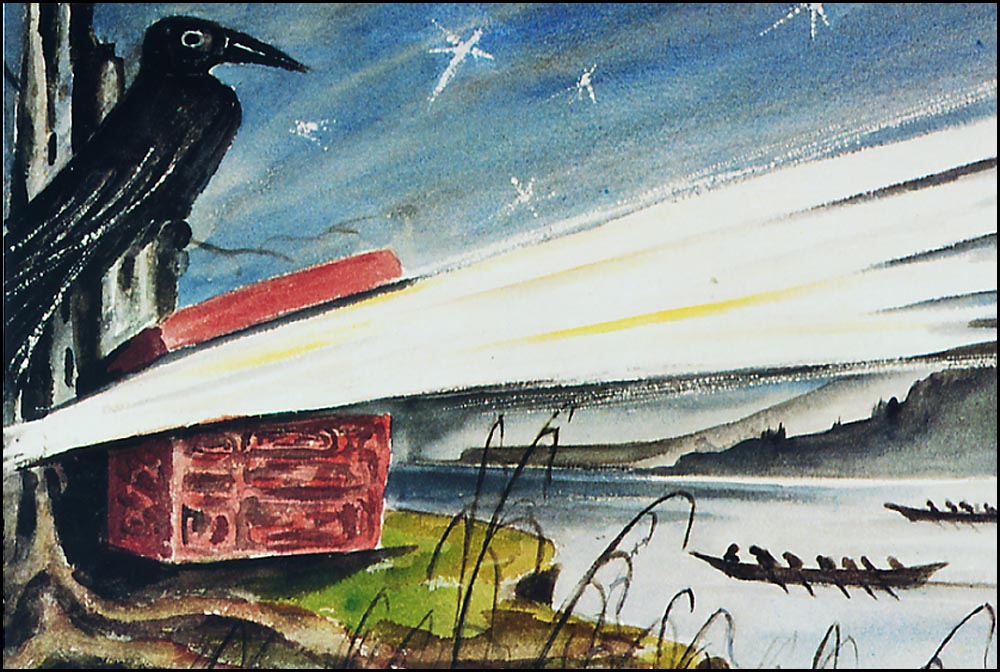 Raven Opened the Box of Daylight: Raven changed himself into a small grandson of the important chief who possessed the box of daylight. He cried until his grandfather gave him the box. He then opened it, letting out the light and frightening the creatures that had known darkness.

Each night we gather to listen to someone in our clan tell us the legends of how our world came to be. We learn about the important things: family, wealth, generosity and right behavior. 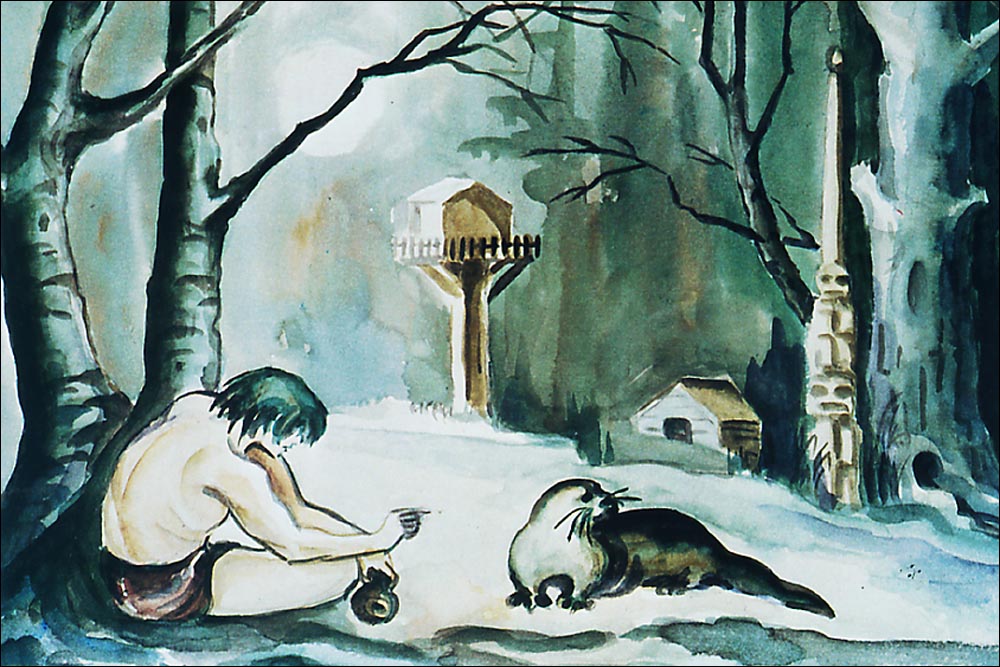 The Shaman and the Land Otter: A respected shaman was informed by his guardian spirit that he would be called to visit a certain place. There he found a young land otter that was ill and he healed the creature. The shaman was richly rewarded and then taken back to his home. 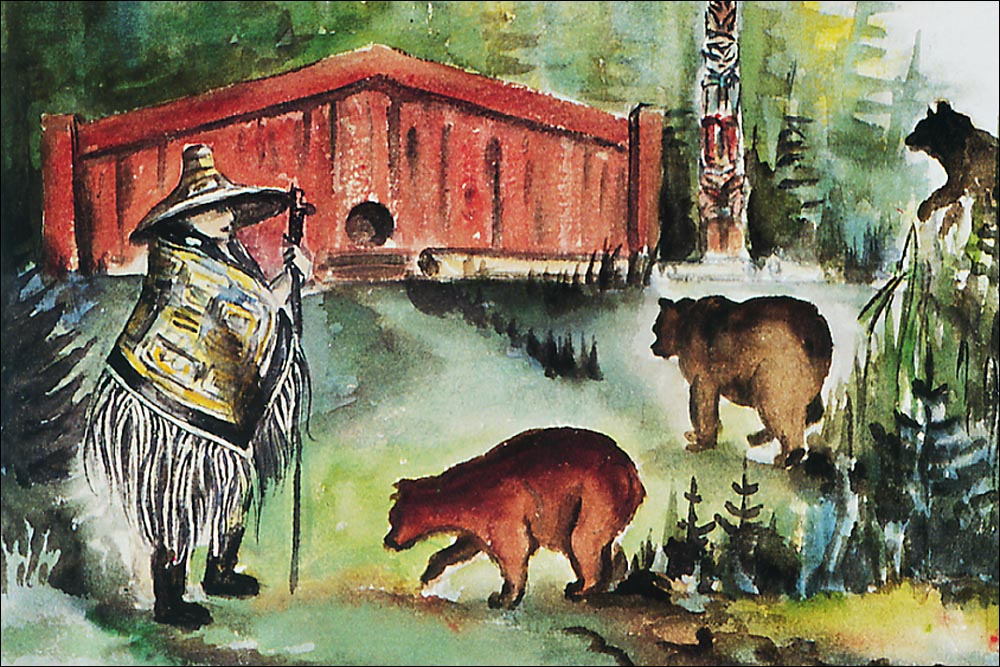 The Man who Entertained the Bears: A lonely man, having lost all his friends and relatives, lay in the path of bears to be killed. When they appeared, he changed his mind and invited them to a feast. They became his friends.

Postcards that show the art and legends of the Tlingit help the culture live on, and give all of us the opportunity to know about their rich Native American traditions.

Bonnie Wilpon is the author of Postcard History of Sarasota and Bradenton, Florida and Postcard History of Hollywood, Florida (published by Arcadia Books) and is a postcard dealer and collector in Tampa, Florida. She is Membership Chair of the Sunshine Post Card Club and a Contributing Editor for Postcard History. Bonnie can be contacted at: bonnpon@att.net.
PrevPreviousThe Wildflower Excursions
NextG. W. Bonte’s Tuck PostcardsNext
9 Comments
Oldest
Newest Most Voted
Inline Feedbacks
View all comments
hsghagsasafsfd
-3
Reply
hsghagsasafsfd

im done with this

My name is Skyler White yo. My husband is Walter White, yo. uhuh. He told me everything.