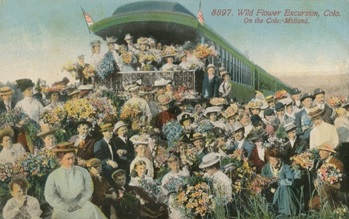 Wild Flower Excursion on the Colorado Midlands Railroad, circa 1907

Founded in 1883, it was built with the idea that a mid-state route was needed between Colorado Springs and Leadville, through to Grand Junction, and then onto Salt Lake City, Utah. Apparently it was a sound idea but it simply didn’t happen the way it was planned. Lack of funding, construction difficulties, unreliable material suppliers, and a bit of corporate greed all worked together to spell failure.

The economic panic of 1893 was the death knoll of the Colorado Midland. The company was sold through a bankruptcy court on May 4, 1897, and a new company took over operation of the railroad, but managed only a meager profit for just over two years. In 1900 CMR joined the Colorado and Southern Railway but continued as a subsidiary. In a seemly never ending string of unfortunate circumstance – an unexplained drop in silver prices among them – the corporate leaders tried everything imaginable to increase cash flow.

It may have been downright laughable when someone suggested at an executive board meeting that the railroad advertise, sponsor, and operate “Wildflower Excursions” into the open fields of central Colorado. The concept was simple. A passenger would board the trains in Colorado Springs, enjoy a serviced hot lunch and then be given two hours to leave their passenger-cars to walk the fields to gather – literally – armloads of wildflowers. The return trip to Colorado Springs would take only an hour.

Well laugh as they might the first such event took place in the spring of 1907. Hundreds at first, but later thousands of tourists made their way to Colorado for this event. The schedule grew until every piece of CMR equipment was in operation every Friday, Saturday and Sunday from mid-April until late October.

At a recent postcard show I found this postcard showing the wildflower excursion and the crowds of tourists who participated. It was certainly popular with lots of wild flower enthusiasts. Since the card I purchased was unused, I went to an online auction website to learn if there were others. Surprisingly I found five versions of the card featuring the identical picture by three different publishers. A comparison of quality was somewhat interesting. One was excellent, three were satisfactory and one poor. The poorest quality card however changed the color of every individual’s clothes. The lady in white (bottom left) wears a blue dress in the other version. 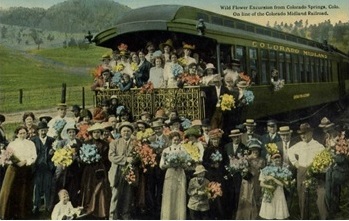 A sixth version by one of the same publishers featured a different but very similar photo. The aspect of the photo is changed by just a few degrees and the crowd is different and more posed than the earlier version.

Research continues, but it seems that the success of the “Wildflower Excursions” lasted only seven or so years. The newest of the postmarks found on the other cards was 1914.

A research inquiry to the Colorado Springs Pioneer Museum yielded some information, but nothing that shed light on minutia like ticket prices, frequency of the trips, or other details.

Ellie McCrackin is a pen-name used by one of America's foremost archivists. Preferring to remain in the background, Ellie ghost writes for some of the leading world historians. She loves postcards and loves to write about the stories they tell.
PrevPreviousCopernicus, Science and the Church
NextThe Tlingits: their life and legendsNext
1 Comment
Oldest
Newest Most Voted
Inline Feedbacks
View all comments
Justin Shofler

I actually have a pressed flower book (complete with pressed flowers) from the Colorado midland railway from 1888, so I believe wildflower trips started quite a bit earlier.