The “reticulated” giraffe is the most common form of giraffe and it is found in herds that live on the east African savanna – south of the Sahara Desert.  A giraffe’s weight can range from 1200 to 4300 pounds, and it can grow 13 to 15 feet tall – and in some unusual cases up to 18 feet.

The clear geometric pattern of the reticulated giraffe is a network of white lines and large, dark brown patches – a pattern that can be helpful as camouflage.

The giraffe is from the class of animals known as the camelopardalls.  (This word comes from the Greek name for the constellation Camelo-pardalis, meaning looking like a camel but having the spots of a leopard.  The constellation is a large, but very dim configuration of stars in the heavens, west and south of Polaris, the North Star.) 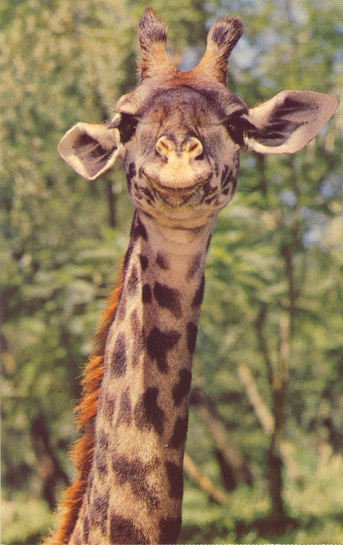 The giraffe’s diet consists of leaves and small branches of trees, but their preference is to graze on leaves of the acacia and wild apricot trees.  The animal holds the branch in its mouth and then pulls away stretching the branch so the leaves are stripped away in one big mouthful.  In this way, more than 65 pounds of leaves and twigs is consumed in one day.  While in zoos, giraffes will also eat hay, carrots, raw onions, and certain biscuits.

A giraffe has very little to fear in the savanna, since it is a very fast runner – up to 35 miles per hour at full gait.  On occasion, a giraffe can deliver a deadly kick from its large hooves which are often up to 12 inches wide.  It is not un-common for giraffes to kill lions using their powerful legs. 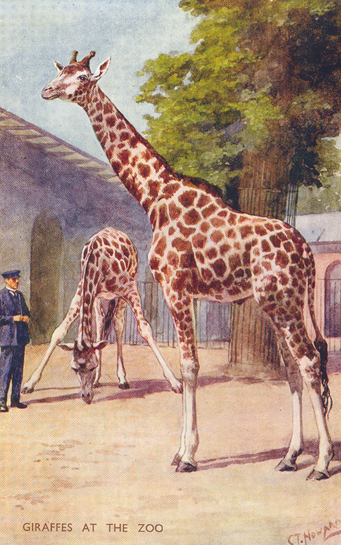 Giraffes at the Zoo

When giraffes drink they are at their most vulnerable, they are always at risk of attack because they must lower their heads to the water and to do so the animal must angle its legs in such a way that it cannot defend itself.  After drinking a giraffe takes a considerable time to regain its stance.

Normally one calf is born to an adult female after a gestation period of 14 months.  The infant is dropped to the ground head first – often a drop of about six feet.  The drop seldom injures a calf that may weigh-in at between 100 and 150 pounds.  The young reach maturity in three to five years.  Most adult life spans range from 15 to 20 years.

While they look for food, some giraffe mothers often leave their young in nurseries, a gathering where the young are guarded by other female members of the herd.  The young begin eating leaves at four months.

Generally the giraffe has a peaceful nature, however the males do fight at times – mostly for control of the herd, but they are often seen resting together after their battles.

Have you ever had a friend who insisted on telling you jokes about things you like. For years I worked with a guy who was like that. The only giraffe joke (believe me, there were dozens) he told me that made me laugh was:

What do you get when you cross a giraffe with a hedgehog?