I have one single postcard to illustrate my point and that point is simple and straightforward. Actually my point is a question. A question designed to measure patience; your patience. The question is one which may cause you to stop and think. And that my reader will be my point. Think!

When was the last time you did something 138 times? I’m not asking you to remember something like counting coins in your pocket, the words in an essay, or the lines on a page. Or anything else that can be accomplished in a few minutes or even a few hours.

138 weeks is just a bit more than two-and-a half years; a bit less than thirty-two months For most of us that length of time requires a full measure of patience.

My postcard is nothing special; as a matter of fact it is a postcard that is in very poor condition; it has three bent corners, it has been folded in half and the top right corner is so frayed it will fall off in the near future. It is a monochrome card emblematic of the lives some of us live. 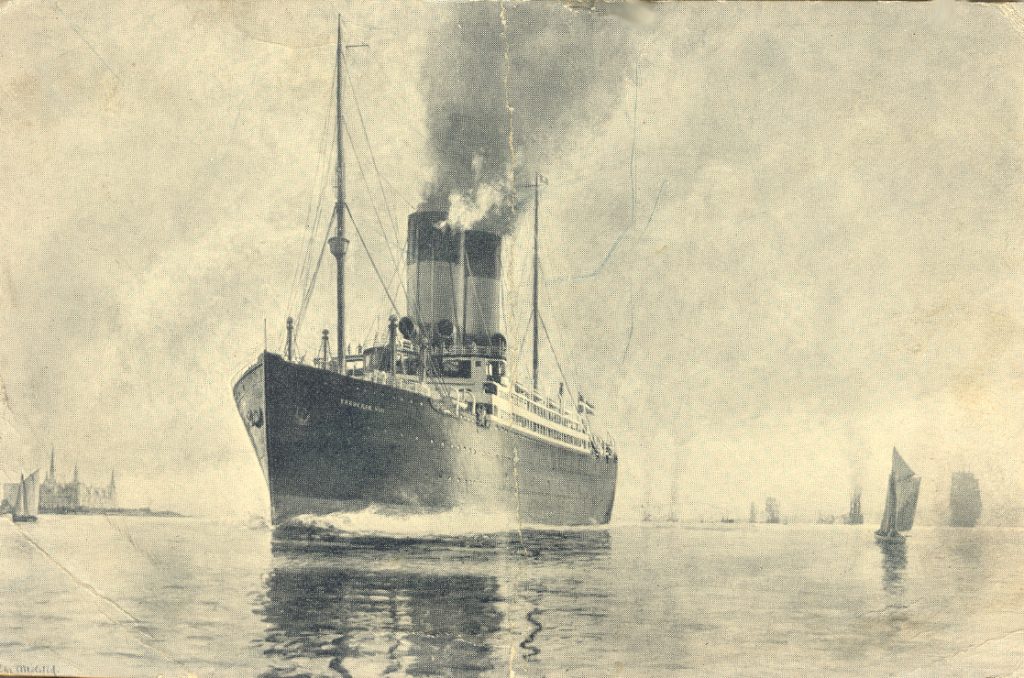 This card was found in a box of quarter-cards at a recent show. A cherished friend has often said, “… life is too short for quarter cards” and I too subscribe to that philosophy of collecting, but when you’re waiting for the collector ahead of you to finish paying for the cards he just purchased, what does it hurt to look in the quarter box while you wait?

The poor little card here would never be included in my collection except for one extremely important consideration – the message on the back is utterly fascinating. It reads:

Souvenir of my 138th crossing of Atlantic Ocean,
and of my 40th crossing with Capt. Mecklinburg, on this ship.
Philip Y. Peabody
At sea, on board S.S. “Frederik VIII,” bound West, Sept. 9, 1932.

The Scandinavian-American Line’s Frederick VIII was named for HRH Christian Frederick Vilhelm Carl of Schleswig-Holstein-Sonderburg-Glücksburg, the king of Denmark from January 29, 1906 until his death on May 14, 1912.

Do you think it is safe to assume that Mr. Peabody was a valued member of the ship’s crew?  Isn’t it interesting that a man with an English name that means “mountain man” would work so long as a seaman?