[Editor’s note: I had a “thing” years ago about cleaning the garage on New Year’s Day. I don’t do that any longer for I must do things when I am spirited into action. When I recently decided that the top drawer of my filing cabinet needed to be “thinned out” I found this piece of forgotten correspondence. Note the date. It answered a few questions I had; it may do the same for you.]

What Do You Do When You Stop Collecting?

When I graduated from college in 1955 it was a totally different world.  Houses were places you lived with pride in ownership, not as they say today, “McMansion” residences.  Cars were transportation, not fashion statements.  Jewelry was a luxury; men wore wedding rings, not earrings.  Very few people had hobbies, they were too busy working.

I was lucky in life.  I had a hobby before I had a job.  I collected stamps.  When I lived in New Jersey everyone on Oak Street in Paterson saved stamps for Little Donny.  I loved them for that.  When I moved to New York and opened my professional office, I collected money – so it seemed – lots of people in Glen Cove and neighboring communities wrote me checks or handed me cash, albeit the amounts were small, it all added up to a nice income.

In the late 1970s when I started collecting postcards, I thought collecting would amuse a few hours of my retirement days. When I closed my office in 1995 I had more than fifteen years of accumulated cards that needed to be sorted and arranged. United Van Lines moved my collection to Phoenix and it took some time to decide how to sort and how to arrange the cards.  I recently finished the chore that I set for myself some ten years ago.

Today, “downsizing” is my new favorite watchword.  I don’t like doing it, but at my age things have to go to make space for whatever comes next.

My New York cards were the first to go.  After they were sorted and counted there were 8,741 cards from the three counties on Long Island plus Westchester, Putnam, Dutchess, Ulster, Orange, and Rockland – places I called my Hudson River cards.

About six weeks ago I sold my foreign cards. I didn’t count them, but they represented 63 countries and could have told the story of six generations and three wars.

Just last week my New Jersey cards went out the door to a dealer from Salem, Oregon.  The collection was just shy of 6000 cards from all 21 counties in the state.  Ah, but here’s where I drew the line.  I kept one New Jersey card. 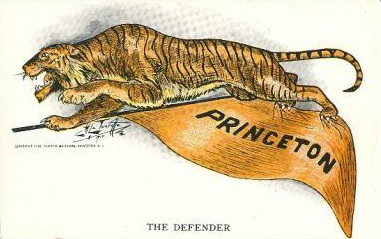 The Princeton Tiger – The Defender. A mascot of questionable origin but unchallenged character and uncontested temperament.  A mirror image of America.

So, “What do you do when you stop collecting?”  I’m not sure of an answer, but if you do what I did, you pick out the card that represents everything you knew, everything you know and everything you will learn and you save it for an uncertain future. It will remind you of all the wonderful times you went to postcard shows and talked to wonderful people who got in your way when you wanted to grumble instead of smile.