I’d Rather Fight than Switch

I remember the TV and magazine ads of the 1960s by Tareyton cigarettes picturing a smoker with a black eye touting, “Us Tareyton smokers would rather fight than switch!”

An example from a magazine ad is shown in Figure 1.  Presumably this ad emphasized Tareyton smokers brand loyalty willing to fight to defend their product devotion. The cigarette had a two stage filter with fiber and activated charcoal.

According to the internet, the “I’d rather fight than switch” ad campaign for Tareyton produced for R.J. Reynolds ran from 1963 to 1981. It was quite successful. In 1971 radio and TV ads for tobacco products were banned but the print media ads were not. Apparently even Martha Stewart appeared in one of these print ads in 1966. 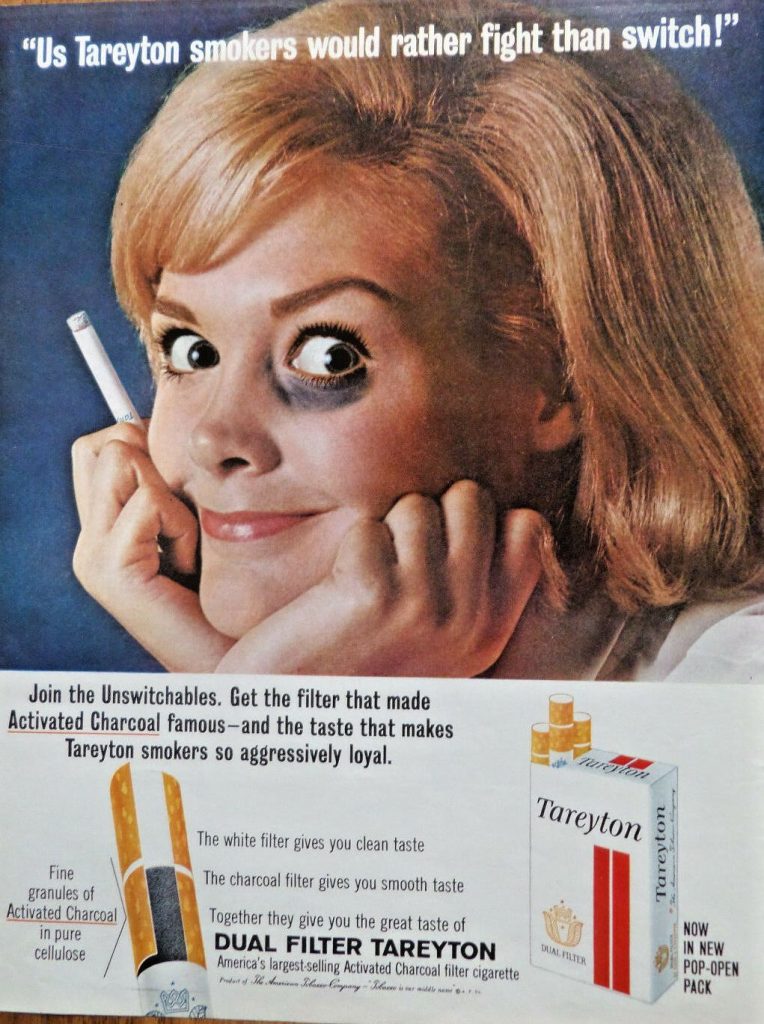 I found out through postcards that this slogan may have a different origin or at least used by another company. The oversized advertising card (7 x 5 ½ inches) shown in Figure 2 was mailed with a bulk rate permit (thus has no mailing date) from Syracuse NY. The glossy picture on the reverse of the card shows a new American 707 Astrojet in flight. (Figure 3).

The slogan “People who fly American Airlines would rather fight than switch*” is the same in principle used by the Tareyton ad. The man in the picture has a black left eye (from a right handed punch) much the same as those seen in the cigarette ads.

He stands on the airplane stair ramp in front of an American Electra (printed on the fuselage) while the front picture is of a 707 Astrojet.

I tried to use these bits of information to help date the card.

According to the internet, the Lockheed Electra was delivered to American Airlines in January 1959. It was a turbo prop engine that had some noise problems early on.  Also three fatal crashes from February 1959 to March 1960 resulted in the public losing confidence in the plane even though the problems were identified and fixed. Production of this plane halted in 1961, although the plane did splendid service elsewhere for many years.

The American Boeing 707 Astrojet was produced in 1961 and other 707 varients were used by American through 1981.

On March 2, 1962 an American airlines 707 flight out of Idelwild airport (now JFK) crashed killing all aboard. A malfunction in the automatic pilot system was blamed.

Given the above information on the two airplanes a timeline of about 1961-1963 seems reasonable for this card. This would pre-date the Tareyton ad somewhat. Given recent mishaps with fatal plane crashes 1959 through 1961 it is not surprising that a mail ad campaign might be launched by American to calm public fears. Perhaps this card was part of that mix. As best as I can determine from internet sources, Sterling Cooper was the ad agent for American at the time and James Jordan of BBDO was the ad agent for R.J. Reynolds who came up with the Tareyton slogan.

Bottom line it looks like the American ad may have come first but until more proof is available its anybody’s guess.  What do you think?

A spin off card of a similar theme exists in at least three styles and usually hails from Florida. I show a Continental sized example of one cancelled Jan 1977 (Figure 4)  The cards  typically show a female in a swim suit on the beach being approached from behind by an alligator with the saying   “ Us Florida Alligators would rather bite than switch”.

Those of you who have seen these type cards before and wondered about their origins now know there may be a connection to the American Air line-Tareyton Slogans.

Lastly, for completeness, there is a Batman chrome card by Dexter press dated 1966 that is number four out of a ten card set in Batgram series #1.

The card shows Batman punching a villain as Batman says “Appears you’d rather fight than switch – betrayer of right”.

Bob Toal is an avid collector of postcard postal history targeting the birth and development of US postcards from their early beginnings to present. This includes early pioneer and private mailing cards as well as view folders, bi and tri-fold postcards, jumbo postcards and anything unusual in the postcard realm.
PrevPreviousThe Dixie Cup Company
NextAmerica at Night in the Golden Age of Picture Postcards 1900-1914Next
2 Comments
Oldest
Newest Most Voted
Inline Feedbacks
View all comments
Andy the Actuary

Note, card displays American Airlines zip code. Zip codes were introduced in 1963, so card was at least from 1963 but likely 1964 because commerce was not so eager to adopt zip codes.

Great Job – input from all the readers is always helpful.! bob toal