The Steamer
From 1863 through to March 1949, New Yorkers and nearly everyone who had business or leisure time along the Hudson River had a nodding acquaintance with a fleet of river steamers owned by the Hudson River Day Line.  The primary service of the Day Line was transportation between New York City and the State Capital in Albany.

The company began daily, except Sunday, service in 1863 with just two steamers – the Daniel Drew and the Chauncey Vibbard, and after the first full season of the Day Line’s operations in 1864, their services and accommodations were favorably reviewed in many of the local newspapers.

In the years that followed, the Day Line’s operations continued as they added new steamers such as the Albany and the New York.  By 1899 the new boats carried nearly 230,000 passengers annually and a round-trip on the river was a better value than it had ever been before.

In 1906, Day Line’s, Hendrick Hudson was put into service with a price tag of nearly one million dollars, followed in 1909 by the Robert Fulton and in 1913 by the Washington Irving.

The Washington Irving was to be the largest of the Day Line’s steamers; its keel was laid at New York Ship Building Yard in Camden, New Jersey, on May 23, 1912.  The blue-prints and plans were simply titled “Contract #126.” At 414 feet long, with a beam of 47 feet and a passenger capacity of 6000 on four decks, in four staterooms, and 19 parlors, Contract #126 was launched on December 7, 1912.  The #126 was christened Washington Irving by an unknown sponsor whose picture I found in the holdings of the Independence Seaport Museum in Philadelphia. 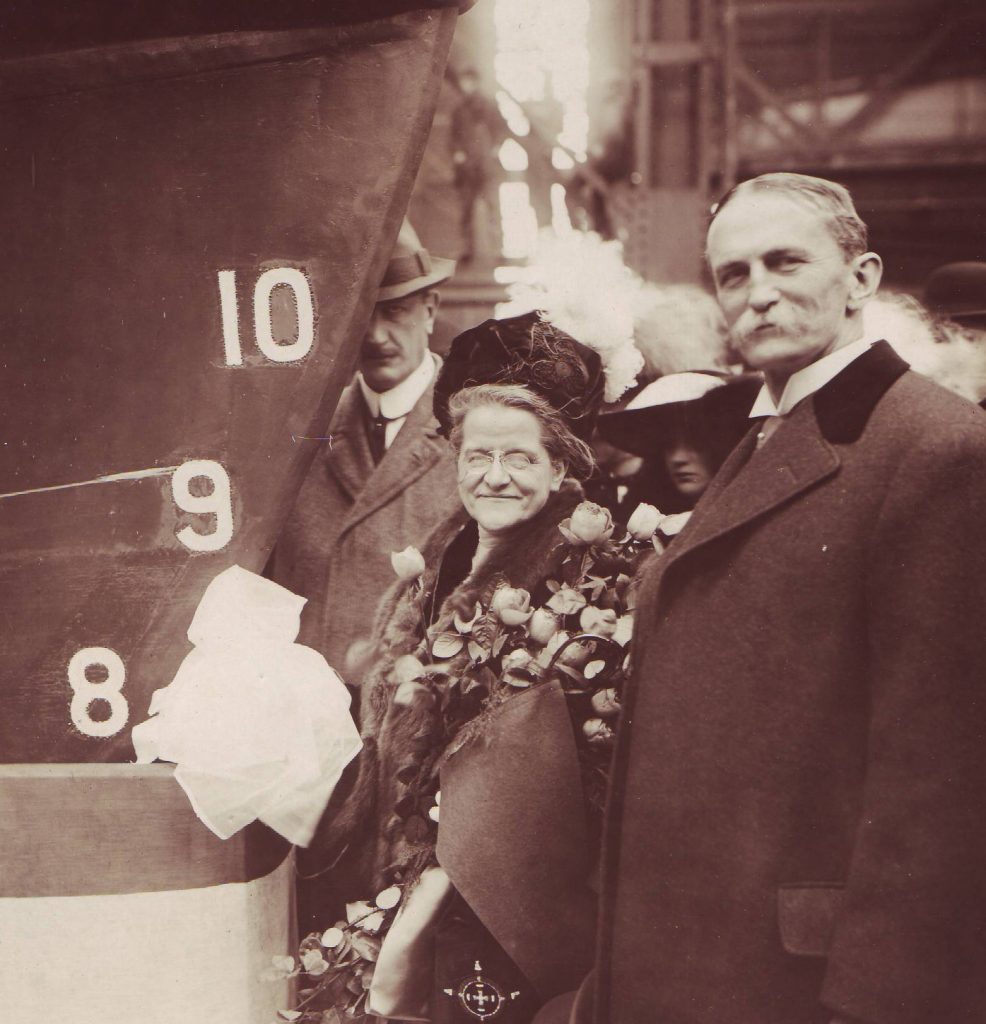 The Artist
In 1911, when Day Line officials decided to build a new steamer, it was to be the biggest and the best.  They chose wisely when deciding what company would build the vessel and who would be responsible for the interior décor.  Early on it was decided that Samuel Ward Stanton, a naval artist of international renown, would be called upon to provide pictures and murals for the passageways, staterooms, dining rooms, and parlors.

Stanton received enthusiastic response from the corporate executives when he suggested that the Alhambra inspire the interior décor of the new steamer.  (The Alhambra is a Spanish palace and fortress where the writer Washington Irving spent a great deal of time conjuring stories that became a significant part of his work.)

Late in 1911 Stanton left for Spain to sketch the preliminary details for the steamer’s interior.  He worked in Granada for nearly a month and later went to Paris for a short course at the Julien Academy where he finalized his sketches and prepared the final drafts.

By early April 1912, Stanton was sufficiently prepared to return to America and begin work with the ship-fitters and carpenters responsible for completing the interiors of the Irving. He left Paris on Sunday, April 7, 1912, and proceeded to Cherbourg to await passage to New York. On Wednesday, April 10, 1912, Samuel Ward Stanton found his way home.  He purchased ticket #237734, for £15 11d, and boarded the HMS Titanic, bound for New York.

Ward Stanton died in the sinking and if his body was recovered it was never identified.

The Washington Irving sailed without him.

Great article on one of my favorite subjects, ships. I took the trip up the Hudson river with my dad when I was 13 years old. What a wonderful trip on a very comfortable ship. Thanks for the history!

The upcoming book “The Boats of Summer,” by Richard V. Elliott, notes that the sponsor of the “Washington Irving” was Mrs. Eben E. Olcott, a daughter of Alfred Van Sandvoord.