In a masterful piece of research done by CBS News in the 1980s, over ten thousand people were asked to identify a set of ten historical images. The results were not surprising: The most widely known among the ten was Montgomery Flagg’s poster image of Uncle Sam; second was J. Howard Miller’s Rosie the Riveter; and third was by an unknown artist who illustrated the brotherly love of two orphan boys from Omaha, Nebraska. That illustration carried a caption that read, “He ain’t heavy, Father, he’s m’ brother.” The caption had been the trademark phrase and logo of Boys Town since 1943. 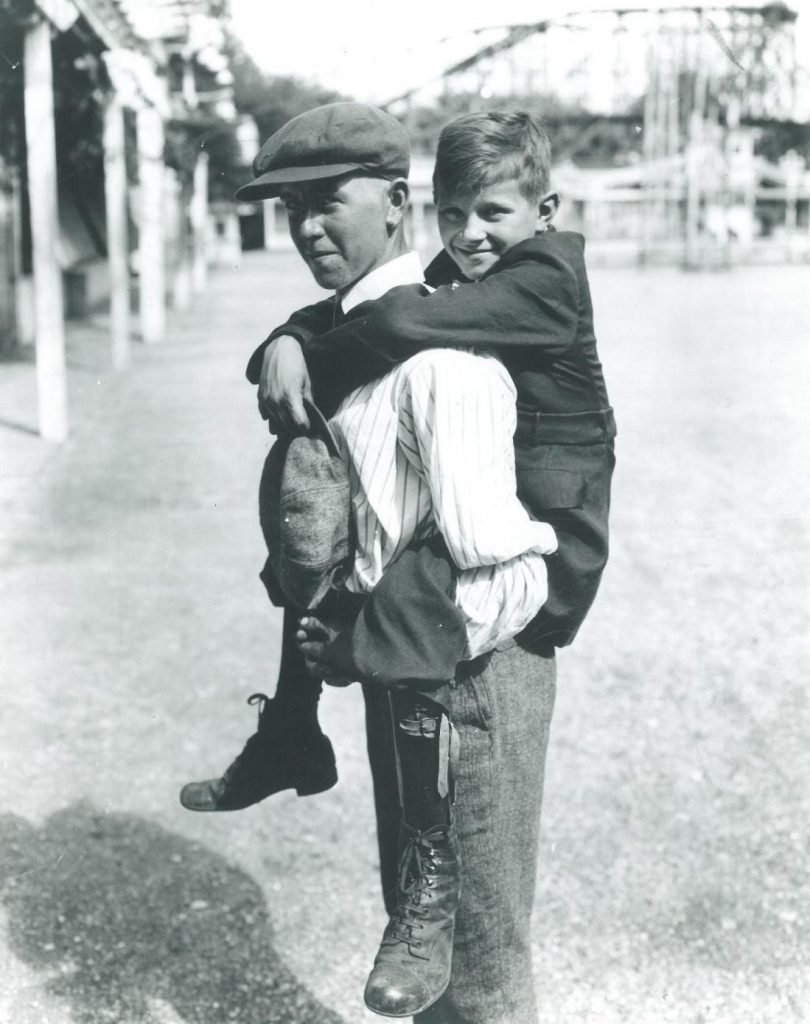 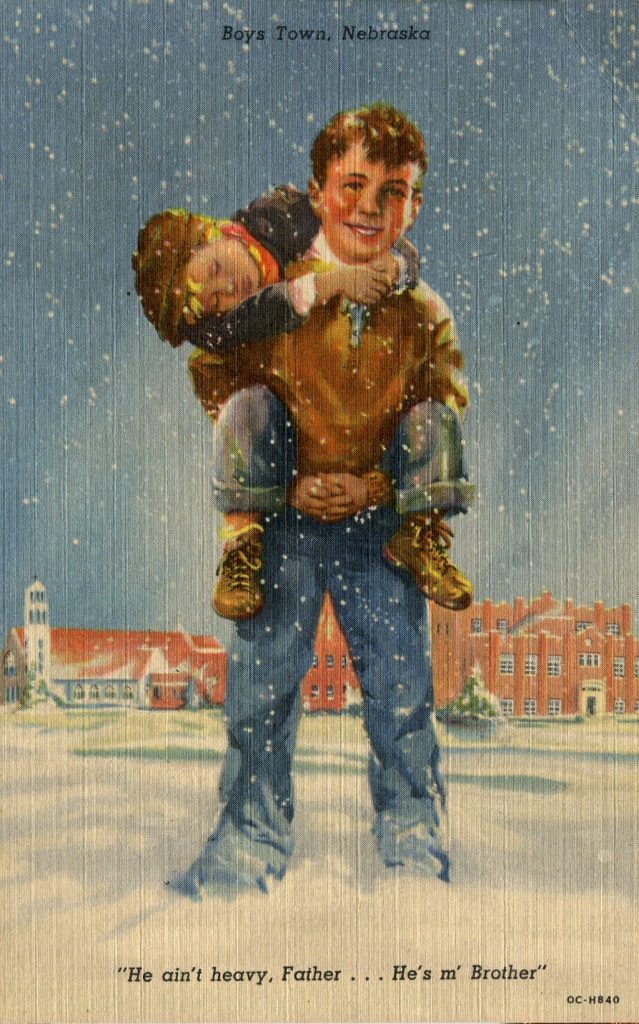 This photograph was taken early in the 1920s in Krug Park,* near Omaha, Nebraska. It inspired this poster that has become part of an American idiom called Boys Town. Boys Town recently celebrated its 100th anniversary, and as expected, Boys Town, is still the name of the place, but it no longer is for just boys. Their new motto (Saving Children and Healing Families) reflects the work they do is for “children” and “families.”

There is ample history of Boys Town, Nebraska, on the Internet, in books, magazine articles, and at many other sources. There was even a movie that featured Spencer Tracy in the starring role of the Irish priest who founded Boys Town. If you have ever had an encounter with an Irish priest, you need no lesson in understanding the tenacity they exhibit when it comes to finding help for their parishioners.

In a time when so many American icons are subject to revisionist historians, it seems that Boys Town will remain above the fray. It all began in 1917 when an immigrant priest named Edward Flannigan, with a loan of $90, organized and began the operation of a home for three wards of the court and two homeless newsboys from Omaha, Nebraska. Those first “Little Men of Boys Town” had been so maligned in so many ways that even their names were left unrecorded on any public document.

The baby boomer generation is familiar with the poster because we were all part of its creation. As World War II came to a close in 1945, the number of orphan boys (and girls) in America rose with each passing day. (Sound familiar?) Fraternal, social, civic, and religious groups across the country were consciously trying to ease the orphan problem, but there was one man who actively did something about it.

One direct consequence of Flanagan’s work with the delinquent and homeless boys led to his being honored by dozens of civic and religious organizations. Pope Pius XI named him a national cleric with the title of Right Reverend Monsignor in 1937. With each honor however, expectations of his help were imagined, including inspection tours in Europe and Asia. Prime examples of which were the global trips he made after the second world war to inspect and publicize the living conditions of children as war victims. He served on several committees and boards dealing with the welfare of children and was the author of articles on child welfare.

His tour of the Republic of Ireland in 1946, where he was appalled by the children’s institutions there, calling them “a national disgrace” caused a high degree in international consternation. The observations he published raised negative comments against him in the Irish press and the Oireachtas (the Irish government), and he was forced to leave the country. He made a similar trip to Japan and Korea in 1947 to study child welfare problems, as well as to Austria and Germany in 1948.

While in Germany, he died in an U.S. Army hospital in May 1948 of a heart attack.  He is interred at Dowd Memorial Chapel of the Immaculate Conception Parish in Boys Town, Nebraska.

In the years from 1917 until his death in 1948, the Right Reverend Monsignor Edward J. Flanagan was a tireless campaigner for the rights of the young who were through no fault of their own, alone in the world.

*ASIDE: The Krug Amusement Park gained national notoriety when just after six o’clock on the evening of July 24, 1930, the “Big Dipper” roller coaster crashed. Four cars plunged to the ground and killed four of its riders and injured seventeen others. The roller coaster can be seen clearly in the background of this photograph.