and Other Impossible Formations

It never seemed to me logical that rock formations that looked too good to be true — were. Sometime, somehow, an enthusiast, an artist, or a Neolithic people had gone to a lot of effort to build them.

In North Salem, New York, not far from where we once lived, there’s this example: 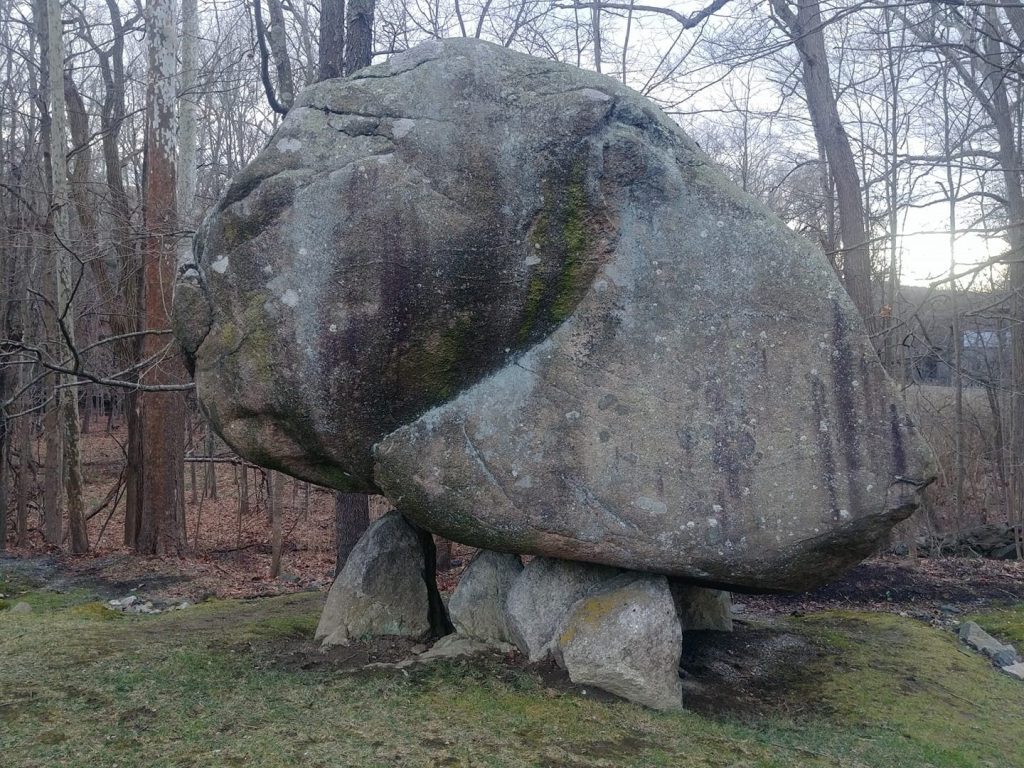 Steve Schimmrich, a geology and earth sciences professor at the State University of New York Ulster, goes into considerable detail on his website “Hudson Valley Geologist”  http://hudsonvalleygeologist.blogspot.com/2013/07/north-salem-balanced-rock.html about the unlikelihood of this being man-made. He considers the rock’s weight and age, and the fact that it is not native to the area where it is now to make the case for it being a “glacial erratic” — in effect, part of the trash that the glaciers scraped from the landscape as they moved across the North American continent, then dumped as they retreated at the end of the Ice Age. Over those two million years, he argues, these things happened.

Not that there aren’t skeptics of this theory. The late Dr. Barry Fell, author of America BC: Ancient Settlers in the New World (1976), was among them. While not a geologist, he was an accomplished marine biologist at Harvard University who made a strong case for the hand of ancient civilizations. Many New Agers are also skeptics, though for the most part they, like Fell, never were able to provide any credible proof for their theories.

There are a lot of these rock formations around. In fact, the term “balanced rock” or “balancing rock” is stretched to describe several different types of rock formations. Beside the “glacial erratics,” there are other kinds of “balanced rocks.” These include a large group of geological formations carved by wind and water over the millennia but where the various elements of the formation are not really separate. And then there are the “rocking stones.” 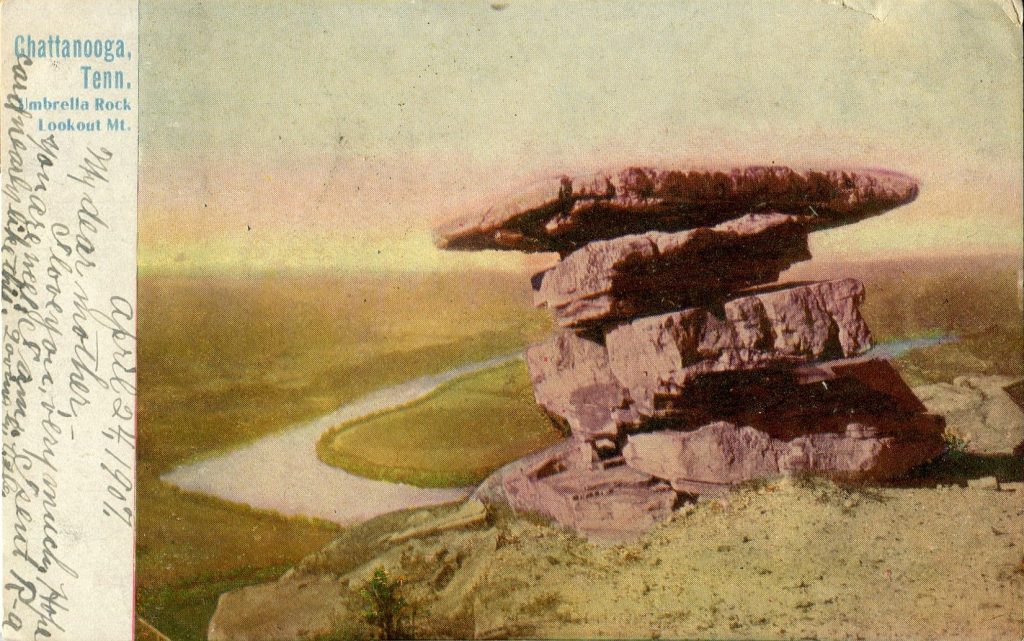 The “Umbrella Rock” at Chattanooga, Tennessee’s Lookout Mountain, has been a tourist destination since the battle there during the Civil War. Numerous early photographs show groups of tourists climbing on and sitting all over this rock. https://www.timesfreepress.com/news/chattanooganow/outabout/story/2016/aug/25/picnic-park-offers-rare-chance-pose-umbrellro/382691/

As recently as 2016, despite the area being a national park, a fund-raising event offered the opportunity (at $75 per person, $130 per couple) to climb on the rocks and be photographed.

What was once called “Mushroom Park,” now the “Garden of the Gods” National Park in Colorado Springs, Colorado, can be found on dozens of postcards. The caption on the back of this postcard says it’s the “most photographed object in the U. S.” and describes the scene as “the Indians shown constitute a part of the Indian Show given in the Mushroom Park. Admission to the Park is 50¢. It includes Indian show and photographic privileges.” 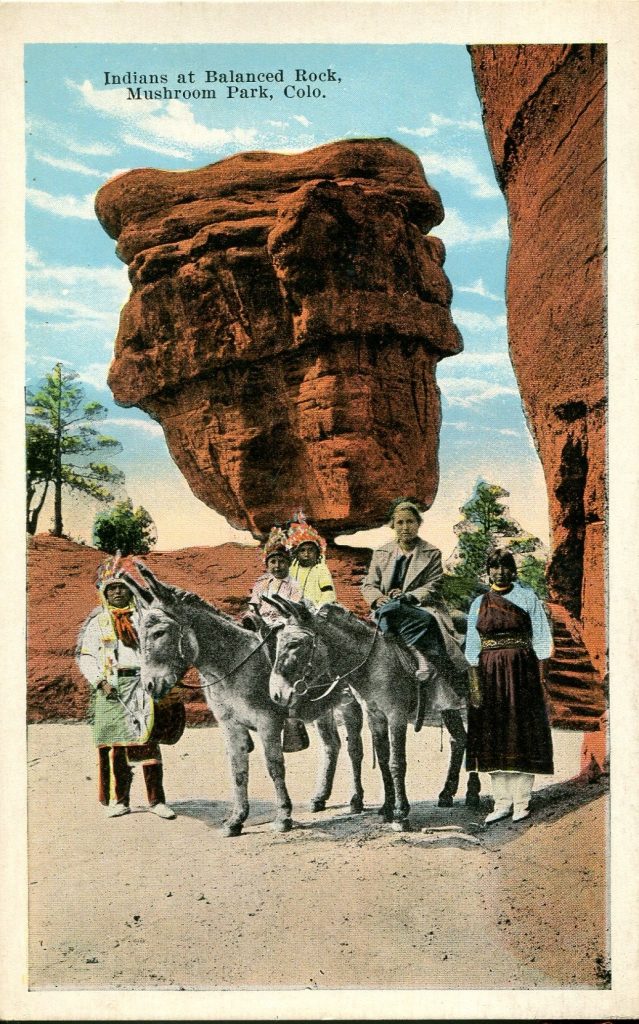 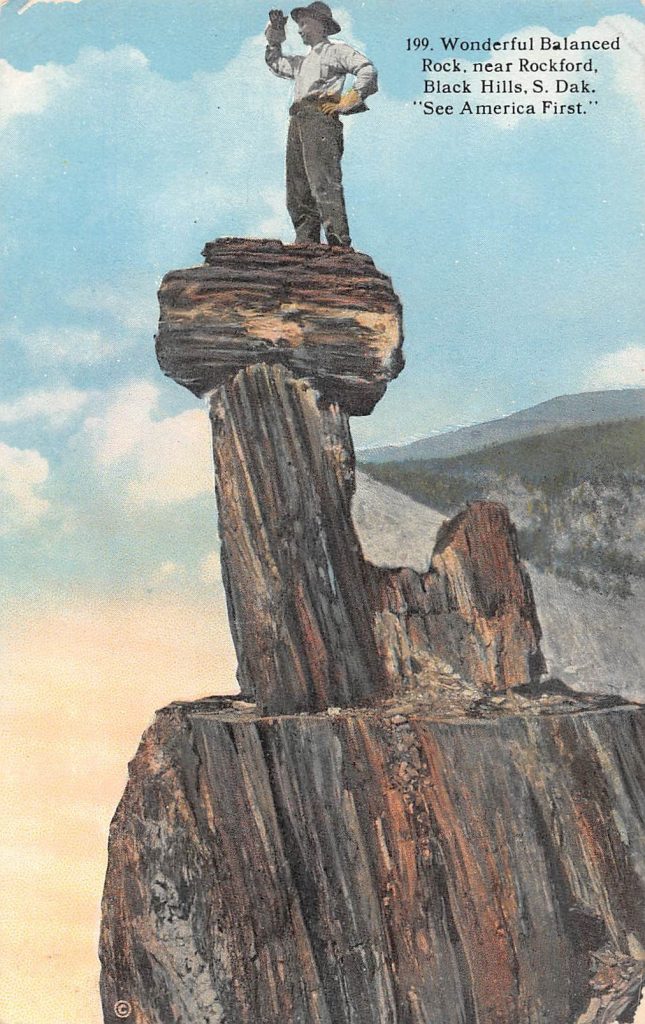 It’s unclear whether the location of this postcard should have been spelled “Rochford,” a mining town that was founded in 1878 with the discovery of the Montezuma Gold Mine. Rochford is within the vast Badlands National Park in the Black Hills of South Dakota. From a population of 350 in the 1880 census, Rochford was down to 48 in the 1900 census. The Northern and Southern Pacific railroads promoted the establishment of western national parks and pushed the slogan “See America First” as an alternative to easterners travelling to Europe. There are a couple of versions of this card around.

The Balancing Rock Nature Trail on the west side of Lake Tahoe’s Bliss Lake State Park is an easy hike to see this example of what is called a balanced rock. In truth, this is an example of a huge chunk of eroded granite that will at some point in the not too distant future collapse in another one of the Lake Tahoe area’s earthquake tremors. 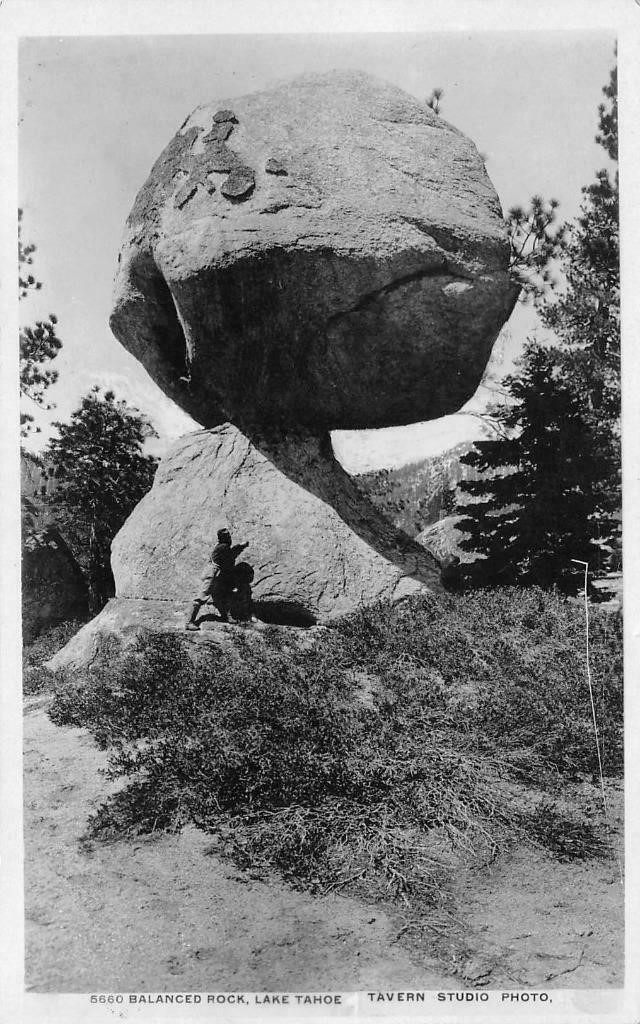 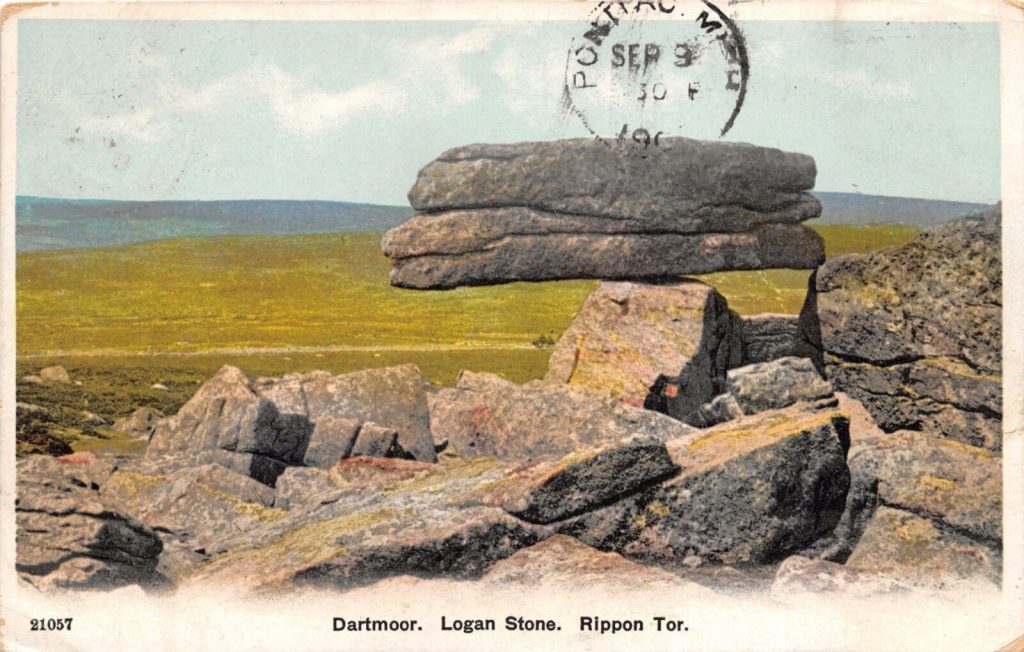 Dartmoor is an upland area in southern Devon, England. When trees were cleared from these upland areas many years ago, heavy rain washed the soil off the hills and into the valleys below, leaving a very little topsoil and turning the ground into a sodden mush that cannot support trees. Some “tors” (hills topped with exposed granite, like the one shown in this postcard) have the unusual property of being so well balanced that only a slight push will easily move them, yet they remain balanced. These “rocking stone” formations are called “logans.” Over time, vandalism has reduced the number of logans. 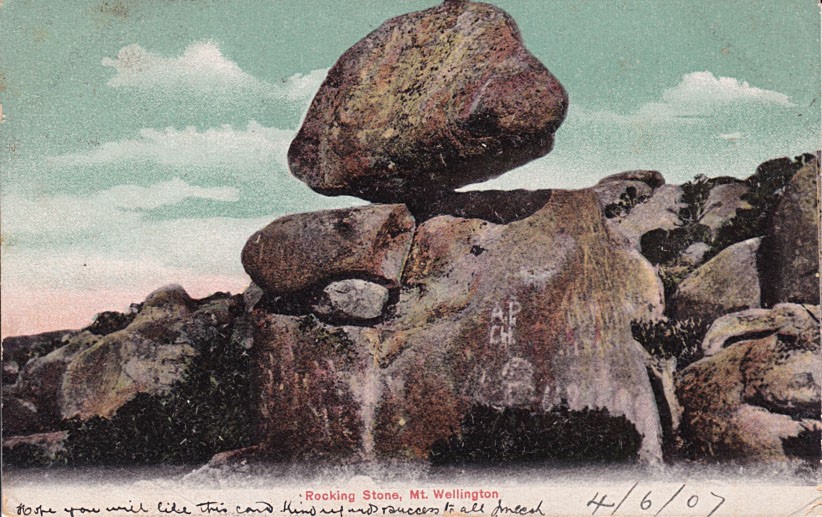 Australia’s Mt. Wellington, near Hobart, Tasmania, has two “rocking stones,” so precariously balanced that they will move with only a slight touch. It was said that they were so gentle that they could crack the shell of a walnut without crushing the nut inside. Alas, vandalism has ruined at least one of these stones permanently. 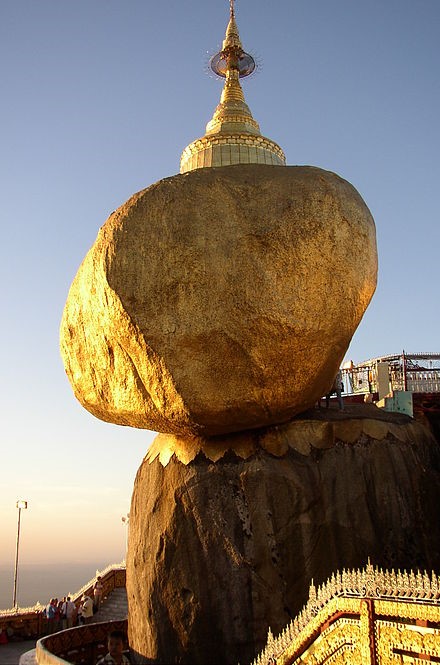 A small Buddhist pagoda sits high on a cliff atop a granite bolder in the Myanmar state of Mon, near the southern town of Kyaiktiyo. “The Golden Rock” is the third most popular pilgrimage destination in the country and over the centuries, devotees have covered the boulder with gold leaf. The boulder is independent of the base but is sufficiently balanced that it has not (yet) fallen into the gorge below.

Bill Burton began collecting Ossining, New York postcards when he lived in that Hudson Valley town. His collection expanded, of course, to include his college, the neighboring towns, and places where he and his wife traveled. In retirement, he's refocused on Delaware and the DelMarVa peninsula towns, but he’s just as likely to be found parked in front of the 25¢ boxes at shows.
PrevPreviousPoster Series XII – Boys Town, Nebraska
NextCowboys in ReposeNext
3 Comments
Oldest
Newest Most Voted
Inline Feedbacks
View all comments
Dave Hill

I woulda thought Logan Rock in Cornwall was one of the most famous, dislodged by seamen in 1824, they had to put it back again!

I read about that but couldn’t get enough material from contemporary sources to validate the story. The amount of vandalism then (and now) is causing so many of these sites to disappear.

I’ve just returned from the Rocking Stone on kunanyi/Mt Wellington. It doesn’t rock anymore,but the Hobart Walking Club says this is due to an earth tremor in 2003, not due to vandalism. The painted initials that are on your postcard aren’t there anymore either. They would have weathered away.