In the summer of 1907 J. Richard Parry, Jr. of Denver, Colorado placed an advert in See America First Magazine. It boasted of a series titled “Cowboys in Repose,” character studies from wash drawings, and advertised photogravures in sepia, printed on heavy art paper for $1 each or three for $2.50. He also offered postcards printed in sepia duo tone Indian tinted stock $10 for a 1000. I’m sure the enterprising young artist and entrepreneur was aware of how popular the postcard format was.  In 1907 postcards were a hugely popular way for people to keep in touch as well as a collecting craze. There were whole stores devoted to postcards, and many a shop supplemented its inventory with a rack of cards.

I first found J. R. Parry Jr. when I acquired three of his postcards. Since they were clearly signed, I assumed it would be easy to find more information on such a talented illustrator with such a popular subject matter. Much combing and searching on the internet got me to Parry’s ad in See American First Magazine but yielded very little in the way of biography or even of any other of his artistic output. 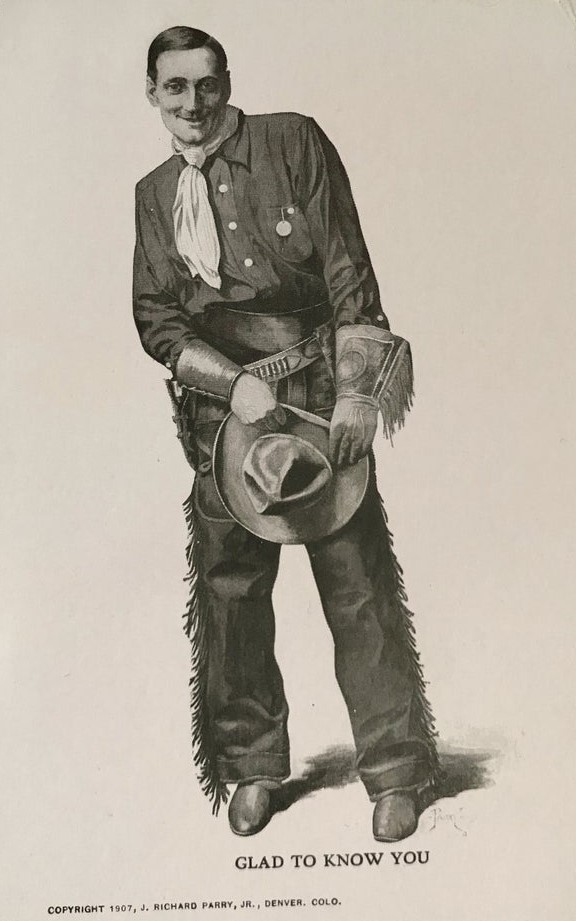 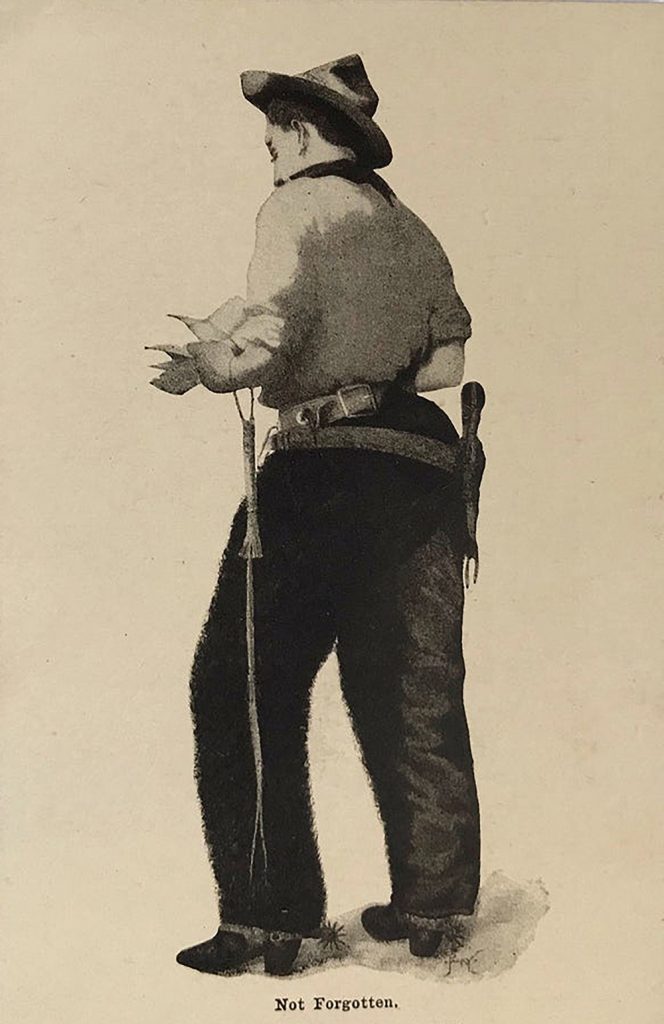 I wanted to find out more. The artwork is charming, capturing a way of life that was already fast vanishing in 1907. I imagined that Parry used real life models for his work, and I like that he humanized the cowboy. Rather than showing him at work or in romantic action like cowboy artist Charles Marion Russell, Parry’s cowboys are reading or writing letters, relaxing or greeting you with a shy smile. Without any history of the artist beyond ephemeral postcards of his art, and a single ad in a magazine it was hard to put a biography to Parry, but I speculated, like cowboy photographer Charles E. Morris, who also turned to postcards to earn a living, that Parry was a cowboy himself. The attention to detail is minute, from the tools of a cowboy’s trade, to the style of hat or spur. They struck me as more authentic than many a real photo postcard of a city slicker dressed up as a cowboy for a studio shot. 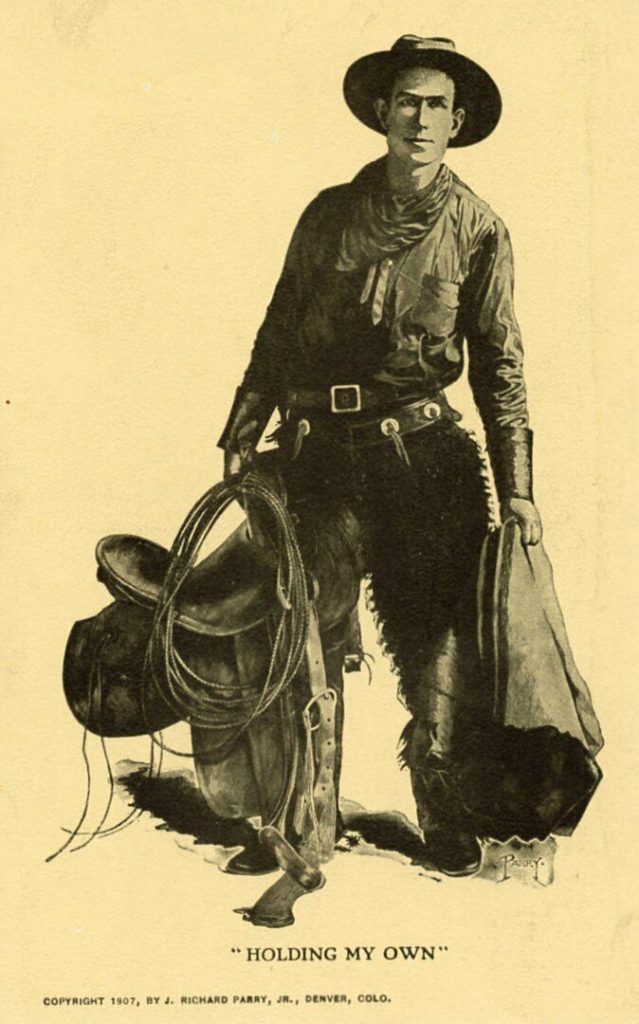 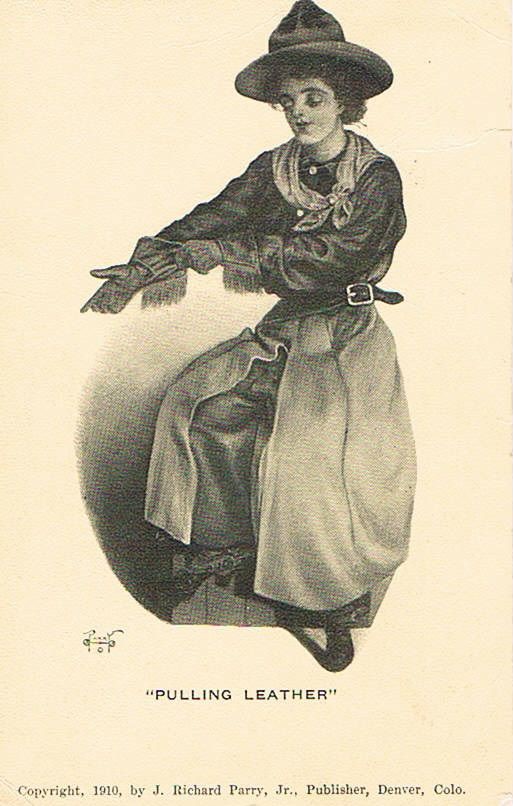 There is a romantic cast to the cards, picturing the cowboys as shy and clean cut, engaged in activities like writing home. It is a view of this most American of professions as gentle knights of the prairie, always ready to tip their hat politely to a lady and with deep ties to their families. It is quite the opposite of the other commonly shown view of the cowboy drunk in a saloon and then shooting up the town. These images also say a great deal about the ideals of the people of the day, and how they viewed manhood. And ultimately, they are the main clue left to Parry’s own dreams and aspirations.

Digging around on some genealogy web sites, as well as diving deeper the historical record I was able to construct a sparse biography. John Richard Parry Junior was born in 1883, or maybe 1884, to John Richard Parry and Elizabeth Parry of Denver, Colorado. He was the oldest of three, having a sister Hazel four years younger, and a brother Edwin seven years younger. His family appears in the 1910 census and reveals that 26 year-old Parry was still living at home, and his profession was listed as illustrator. I can imagine a supportive family, allowing him to try and make it as an artist while still living at home. It also shows that Parry was ambitious at a young age, as his ad from 1907 clearly demonstrates, when he was only 23 years old. 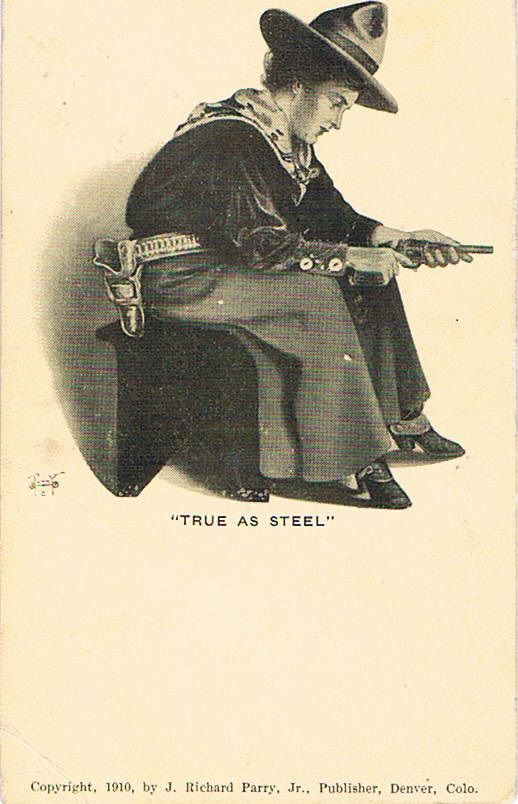 I guess things didn’t work out the way Parry dreamed. He stayed in Denver his whole life. A few years after the 1910 census, on a legal document, he listed his job as salesman for himself. One can only hope it was still his artwork, but I see no evidence of him as an illustrator after 1910, the copyright date on a second set of illustrations of cowboys (including one cowgirl). By the twenties he was married to Edith and an upright citizen, secretary and treasurer of the National Mutual Benefit Association of Denver (likely an insurance cooperative). In 1940 Parry’s occupation was listed as “salesman in the machinist industry” – hardly a romantic career for the young man that had so enthusiastically drawn and pedaled the ideals of the noble cowboy. In 1941 he and his wife Edith were involved in a bad car accident. In a snowstorm they skidded and plunged over a 12-foot embankment according to the local newspaper, the Greeley Daily Tribune, March 25, and Parry suffered a crushed chest and rib fractures. Edith had a compound leg fracture and abrasions to the face. It must have been quite traumatic. In 1952 Parry passed away and was buried in Wheat Ridge Cemetery, Jefferson County, Colorado.

And that’s it – fragments of a life once lived. I wish I could have found something that suggested that the young artist had been able to keep drawing – even if it was just for his own pleasure. I take a little solace from the fact that his postcards have kept that spark alive through time. I think I would like to imagine him as a boy pretending to be a daring gunfighter, a copy of a western pulp fiction magazine as his inspiration, and earnestly trying to bring his vision to paper as he taught himself to draw. 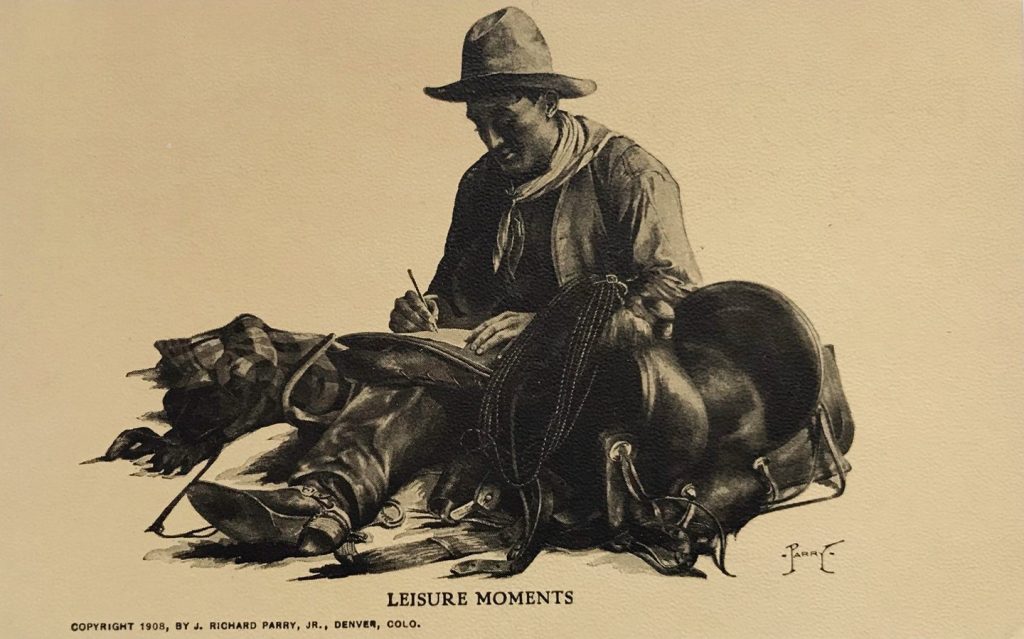 Sydney Longfellow sells antiques and vintage postcards online, as well as being a writer and amateur photographer. She has a degree from Smith College, Northampton, Massachusetts and a masters degree in Fine Arts. She loves the stories that all old things can tell, if you just know where to look.
PrevPreviousBalanced Rocks and Other Improbable Formations
NextTroglodyte and Other Fun Words to SayNext
10 Comments
Oldest
Newest Most Voted
Inline Feedbacks
View all comments
Mary Schaefer

Those are lovely postcards. I have never seen such charming illustrations, and not of a subject that I would expect. Thank you for sharing.

My pleasure, so glad you like them. They really are charming.

Great story! Thanks you for writing it. I have never seen any of Parry’s cards before today.

I was lucky to acquire three of them in one lot. I’m so glad you enjoyed the piece.

This is such an interesting tale. I wonder if either his brother or sister had children who could fill in more of the history?

That’s an interesting idea – I didn’t think of that angle.

I really enjoyed looking at the postcards and reading about the artist. Life was so very different back then.

I just found a “pulling leather” postcard in my parent’s papers. Thank to for taking the time to assemble this information. These cards are so nice. Parry was quite talented. I expect interest in his cards will grow as more people discover his wonderful illustrations.

the cowboy postcards are a must have and be part of ones collection.. if the image of a cowboy is gone, so does postcards will also he gone..