The suspension monorail was invented in England in the 1820s. The distinction is small but the first suspended railway was opened on June 25, 1825, using a patent recorded by Henry Palmer. It was built to carry bricks, but as an opening stunt it carried passengers. Through the next 75 years several iterations of the monorail were built on industrial sites from Russia to New Jersey.

The most famous monorail of the era that followed was built by Eugen Langen in Wuppertal, Germany. Work began in 1901 and the “Schwebebahn” was intended for transport of raw materials to a sugar refinery. Some of the locals called it the “floating railway of Wuppertal.” It was completed in two stages; work on the first part ended in 1902, then the second stage, a year later, extended the Schwebebahn to its total length of 8.3 miles. Today, 117 years later, it is still in daily use and estimates suggest that nearly 20 million people use it each year.

All those passengers use the system to travel through the city without the problems of busy intersections or traffic jams. It is scarcely troubled by ice and snow and when operating at normal speeds (37 miles per hour) a passenger can travel end-to-end in just a half-hour. Keep the passengers concept in mind; I’m going to tell you a story of one particular passenger.

There is no surprise that this monorail has become a favorite tourist destination and one reason for its fame is an event that occurred in July 1950. And, that event was a circus. Yes, literally, a circus.

That summer the Althoff Circus was doing a continental tour of Europe and for the third week of July their opening night performance would be Friday the 21st. As an advertising stunt the circus director, Herr Althoff himself, thought it would draw thousands of spectators if his prize elephant, Tuffi, would ride the monorail to the site of the big-top.

The animal was only four years old at the time and not fully grown. As her handlers got her onboard, she displayed her discomfort immediately and as the carriage began to move Tuffi ran through the car and broke through a side-door and fell nearly forty feet into the Wupper River. 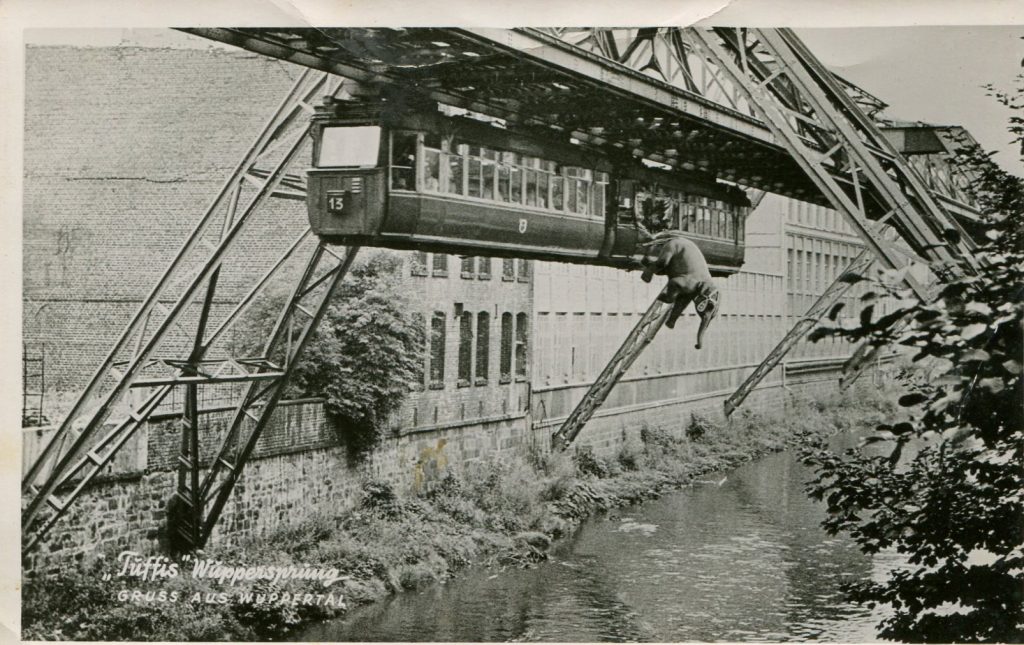 In the panic that followed a few of the other passengers suffered minor injuries in attempts to see what happened to Tuffi.

The worst could have happened but didn’t. Tuffi sustained some severe bruises but no other serious injury. It could be suggested that the worst damage was done to Herr Althoff’s wallet. He and the Schwebebahn official who allow the stunt to happen were fined.

Some afterthoughts:
The building (seen in the background) still stands and its exterior wall features a large mural of Tuffi.

The Wuppertal Valley Tourist Board sells an assortment of Tuffi-related souvenirs.

The Wuppertal Schwebebahn has been modernized. The new terminals are common sites where locals and tourists socialize and enjoy boutique shopping and upscale restaurants.

Tuffi Vitals:
Tuffi was born in 1946 near the village of Jodhpor, India. She lived 43 years as a circus elephant. Some years after the incident in Germany, Herr Althoff sold Tuffi to a French circus. She died in Paris in 1989.

In 1970 Marguerita Eckel and Ernst-Andreas Ziegler published a children’s picture book about the incident titled Tuffi und die Schwebebahn. Currently the book is only available in the German language edition.

I have to tell you that I was at first horrified by this postcard and not realizing that “die” means “the” in German added to my fear. So I was extremely glad that you included the story behind the postcard. I was very very happy to learn that little Tuffi survived the incident and the people involved were fined. Thank you so much for this story!