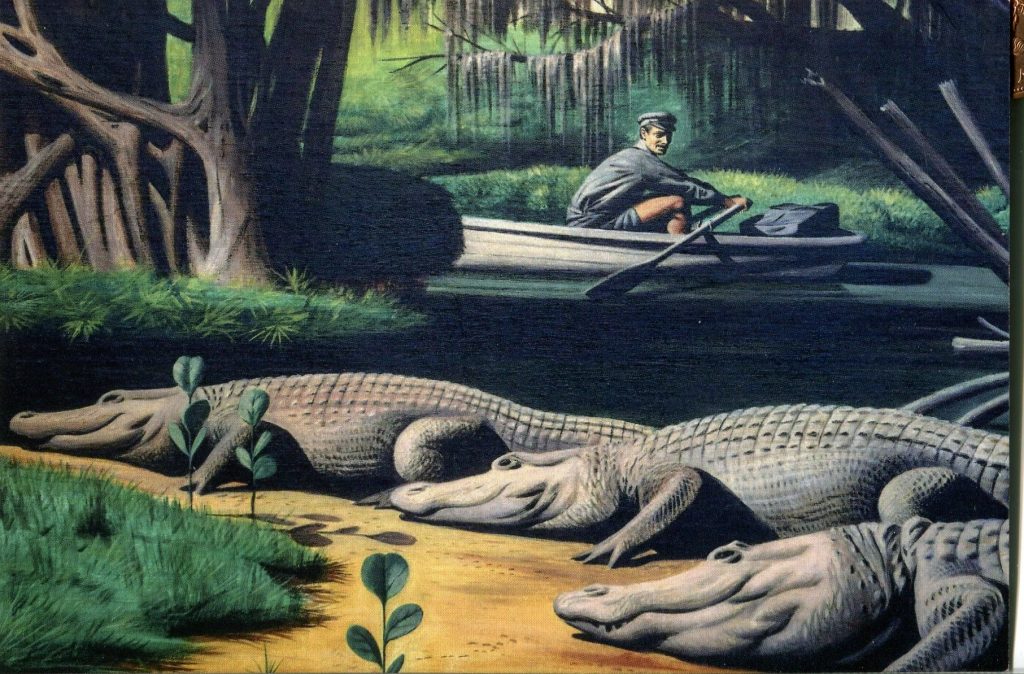 The difference between a postcard artist and an artist in a post office may be insignificant. Most postcard collectors recognize artists named Fischer, Shinn, Humphrey, Elmer, and Wall – those who worked in comfortable studios where the most dangerous tool in the room was a palate knife.

If however the name Steven Dohanos came up in a conversation would a postcard collector know him? Probably not! Because to the best of my knowledge the postcard above may be the first ever to show any of his art. Steven Dohanos did not sit in front of an easel and paint on canvas. He was a muralist; he stood on ladders, high above the floor, and painted with tempera on wet plaster.

Steven Dohanos – 1907 – 1994
Born and raised in Lorain, Ohio, Dohanos attended the Cleveland School of Art. By age 19 he had completed his first one-man exhibit. His style was deemed to equal others like Grant Wood, Edward Hooper, and Norman Rockwell as Social Realist. As a challenge assignment late in the ‘30s, he secured his first magazine cover for McCall’s in 1938. The McCall’s cover provided him with enough notoriety to be asked to work on several New Deal projects. The most famous of which was the 1939 Barefoot Mailman project – a series of six murals to be painted on the walls in the West Palm Beach, Florida, Post Office. The NPCW card provided by Michele Mullins is Panel 5 in the series. 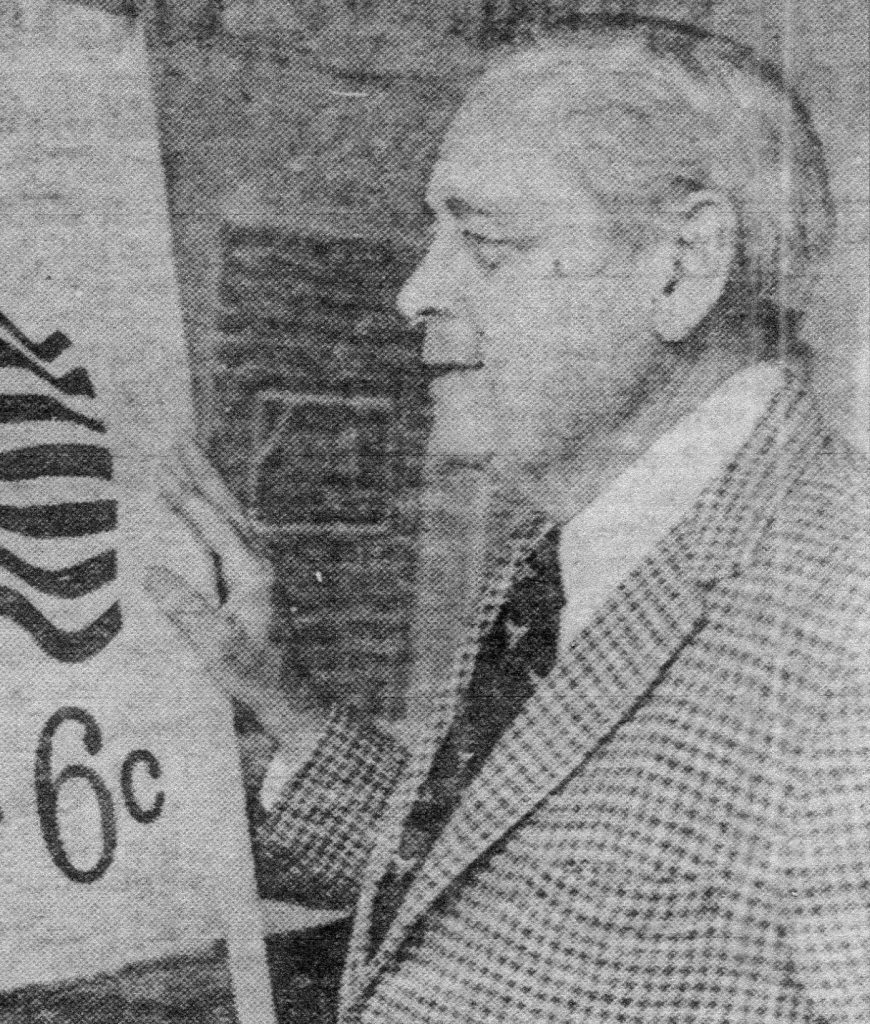 Dohanos moved to Westport, Connecticut, in the early 1940s and in the next fifteen years delivered 125 covers for the Saturday Evening Post.  Along with his magazine covers he also indulged in stamp design. One of his first was in 1959 when the USPS wanted to commemorate the 10th anniversary of the North Atlantic Treaty Organization. In the years that followed, his other commemorative stamps included Alaska’s and Hawaii’s statehood, the Food for Peace Campaign, and the 25th anniversary of the savings-bond program.

The Era of the Barefoot Mailmen – 1885-1893
The Barefoot Mailman is a Florida true to life legend, but it brings to the conversation a global problem. The story is factual and dates to 1885 when a Chicagoan named Edward Bradley and his son contracted for the mail-route along the eastern shore of Florida between Miami and Palm Beach for a salary of $600 per year.

In those years that part of the state had no roads, consequently the mail was delivered by foot along a 68-mile stretch of beach. To cross the several inlets along the route, rowboats were provided usually hidden in the bushes on the northern side of the inlets and were deemed United States government property. A roundtrip took about six days from start to finish.

The father and son alternated the weeks but resigned the route after two years. In 1887, a Kentucky postal employee named James Edward Hamilton took the route and became the most famous of the Beach Walkers. In a common retelling of the legend, on October 11, 1887, the boat at the Hillsboro Inlet was missing because someone had taken it. To salvage the boat Hamilton hung his mail sack and clothes in a tree, jumped in the water and was never seen again. It is theorized that he drowned, but it’s more likely he met a grisly fate. The Hillsboro Inlet was inhabited by hundreds of alligators. 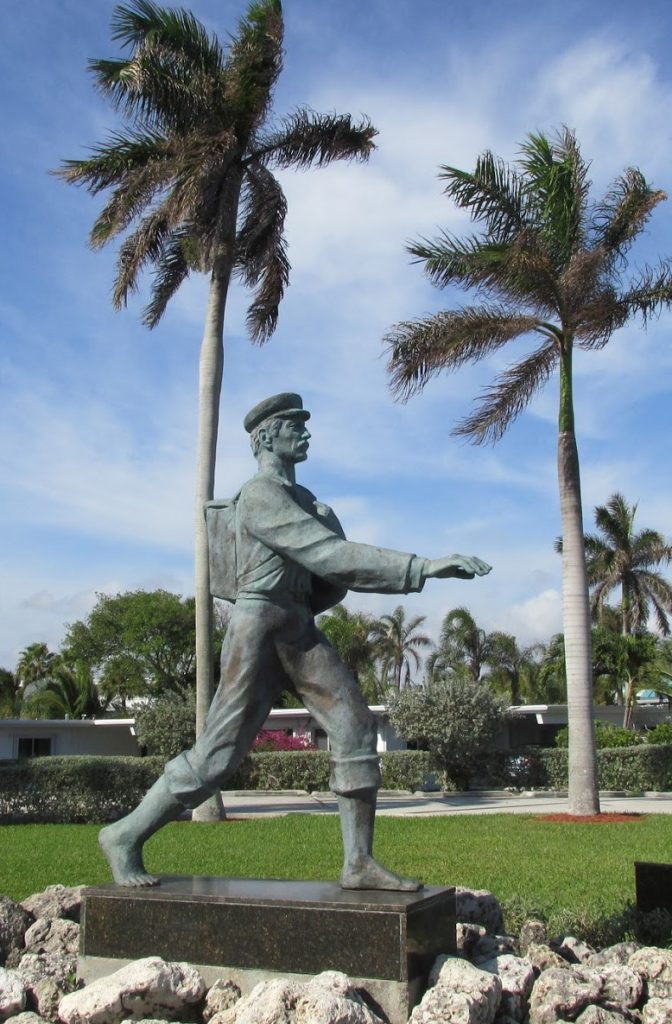 Today, James “Ed” Hamilton is honored by a bronze statue located at the base of the lighthouse near Hillsboro Inlet.

Hollywood sidebar: Based on a 1943 novel by Theodore Pratt, the adventure movie The Barefoot Mailman, starring Bob Cummings and Terry Moore, was released by Columbia Pictures in 1951.

Many Have Died in the Line of Duty
Regrettably, Ed Hamilton was not the first to fall while delivering the mail. Since the days of the Pony Express and when pilots who pioneered the delivery of airmail, those who have sworn to protect our mail have put their lives at risk. It is unknown how many deaths occurred because accurate record keeping did not start until 1926. Sadly, hundreds of violent events have occurred at post offices or in other locations where postal service employees have been involved, and many have ended with loss of life. And, as we speak of such, let’s not forget the three American postal workers who died on the Titanic in 1912.

The card above was received by your editor during the first full week in May – National Postcard Week – 2020. It was mailed from Tallahassee, Florida, by Michele Mullins.* Michele took a piece of Florida and Postal Service history and gave it new life and restored its public awareness. For this, we at Postcard History thank her.

* Several attempts were made to contact Michele Mullins to inform her of our intention to use her NPCW postcard in this article. All attempts failed. If we have readers who know Michele Mullins, the Editor’s Staff would appreciate your help in making her aware that her card became part of this article. Ask her to contact Postcard History by email –  editor@postcardhistory.net

The Staff of Postcard History offers this article for your enjoyment. It is a combined effort of many: our publisher, editor, webmaster and collectors/contributors far and wide. Please use the COMMENTS feature below to let us know how we're doing.
PrevPreviousFive Cities in Four States, What They Have in Common
NextThe Kentucky DerbyNext
4 Comments
Oldest
Newest Most Voted
Inline Feedbacks
View all comments
Ellen Richardson

I love reading the history of these. It is so fascinating!

Since I grew up in a suburb of Cleveland, I had heard of Dohanos, but was not aware of the Barefoot Mailmen.

The Barefoot Mailman has always been of interest to me as I grew up in early Florida in the 1940s and heard many stories about this subject. I Also remember seeing in the West Palm Beach Post Office several panels commissioned during the depression… the picture you have shown was one of 6 … your article made me google the panels and they are currently in another West Palm Beach Post Office… https://www.palmbeachpost.com/article/20150930/NEWS/812069865 …

We have a print of the Barefoot Mailman, and it is signed Carter/Brown. Is that an original, or the original artist?