The Kentucky Derby wasn’t always a ballyhooed event with a private section called Millionaires Row, where the stars and starlets hang out today. Television cameras and boom mics and hairspray have not always been the norm on these hallowed grounds. In fact, the Derby began as a modest affair.

On May 17, 1875, the first Kentucky Derby was run at what was then called the Louisville Jockey Club. A large crowd, by 19th century standards, of 10,000 people showed up to see 15 horses run in the inaugural affair, which at that time was a mile-and-a-half race. 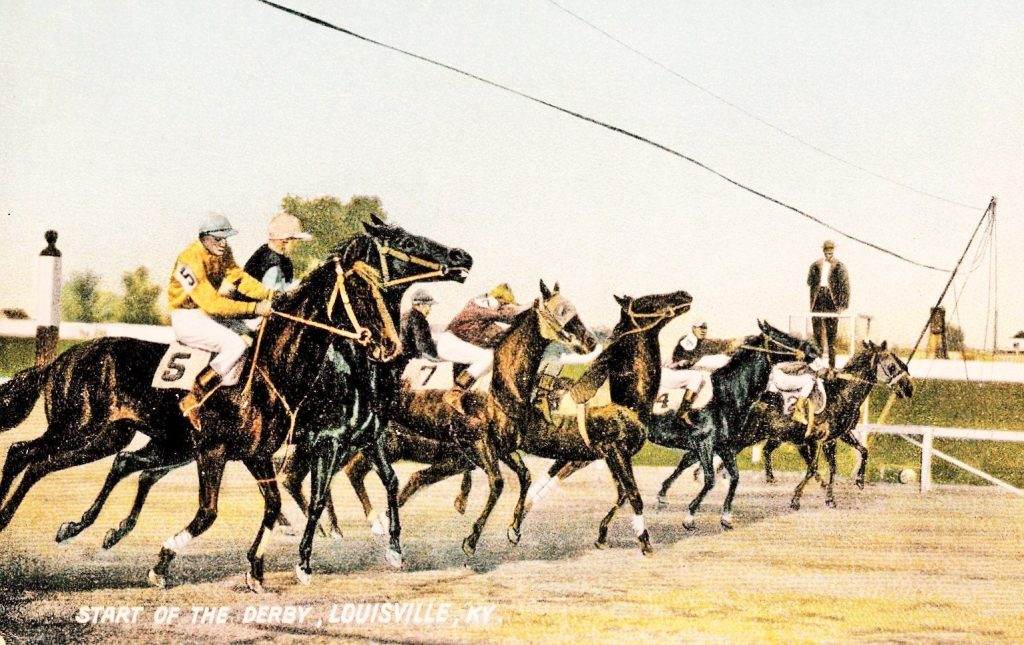 Start of the Derby, Louisville, Kentucky

The starting gate that you see today on the track, with horses being loaded into one chute at a time, wasn’t available in the early days of the race.  The thoroughbreds were lined up, side-by-side as accurately as the horsemen and handlers could arrange them, and then, with a signal, they were off.

There is just something about a horse race; time seems to suspend itself in those two short minutes of the Kentucky Derby, as the viewer watches each moment of an epic story unfold before his eyes.

As the 1900s began, the Derby became a favorite “shot spot” for professional and amateur photo hobbyists.  And by 1906, postcards of the event began to circulate, as locals in Louisville proudly showed friends across the country what all the buzz was about in May of each year.

In 1914, a horse named Old Rosebud won the Derby, setting a record time of 2:03:40.  His margin of victory, eight lengths, is still a Derby record. A postcard of Old Rosebud, produced by the Kraemer Art Company, Cincinnati, Ohio, remains one of the more elusive cards for a collector to find of a Derby winner. 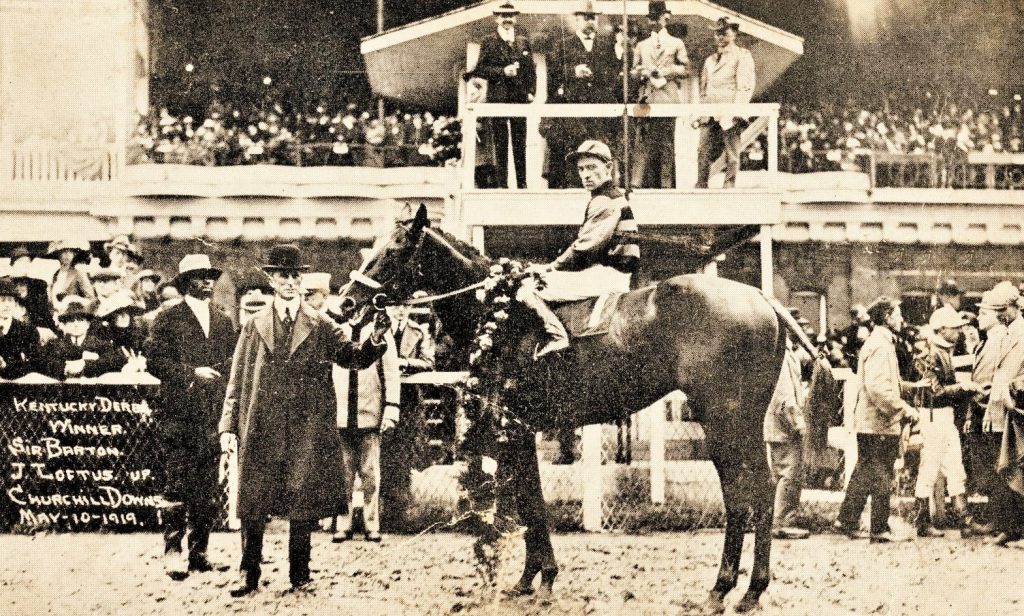 In 1915, a horse called Regret became the first filly to win the race, and in 1919, the mighty thoroughbred Sir Barton won the Derby on his way to capturing what is now called the Triple Crown—winning the Kentucky Derby, Preakness, and Belmont.  He achieved this feat in the span of only 32 days.

1920 will always be viewed as a year of “what could have been” in the Triple Crown triangle of races.  Perhaps the best-known horse of the 20th century, Man O’ War, was a three-year-old, and the staff at Churchill Downs was giddy at the idea of hosting a horse of his caliber in the Derby, who was clearly on his way to superstardom.

But owner August Belmont II made the proprietary decision to hold the horse, who would become known as Big Red, out of the Derby. He had two reasons. First, he felt that the distance of 1¼ miles (the race had been shortened from the original 1½ miles) was too taxing on his horse too early in the racing season. Secondly, he believed that the Derby race date of May 8 and the Preakness date of May 18 in 1920 were too close together, not giving his horse enough rest in the 10-day interim. After skipping the Derby, Man O’ War was victorious in the Preakness, before blowing out the field in the Belmont Stakes by a whopping 20 lengths.

It bears noting that in his career, Man O’ War won one race by one hundred lengths and set five world records. He suffered only one loss in his career, ironically to a horse named Upset, losing by a nose.  He would go on to defeat Upset six times in subsequent races.

In October 1920, a match race between Man O’ War and the 1919 Triple Crown winner, Sir Barton, was staged in Toronto, Canada, to determine which thoroughbred was superior. Much anticipation and fanfare surrounded the event, as these two horses were considered the era’s finest racehorses. Man O’ War defeated Sir Barton soundly by 17 lengths. 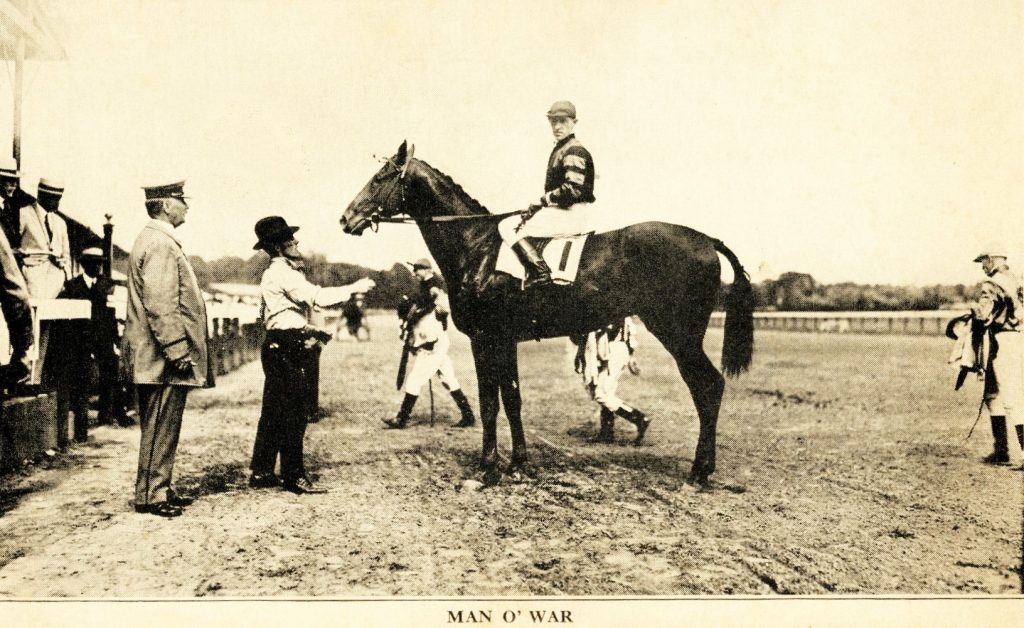 Man O’ War died on November 1, 1947. The stallion’s body was embalmed and buried in an oak casket lined with his black and yellow racing silks. Close to 1,000 people were present at the burial ceremony, and thousands more listened to the radio broadcast of the eulogies. He was buried on Faraway Farm in Lexington, Kentucky, beneath a life-size statue of himself, sculpted by Herbert Hesseltine (1877–1962). In 1977 the remains and the statue were transferred to the Kentucky Horse Park in that city.

Some of the most famous horses of the linen postcard era were War Admiral in 1937, Whirlaway in 1941, and Citation in 1948. Postcards of these horses and other Derby winners are far more plentiful than those of the pre-1930 Derbys.

By 1973, twenty-five years had passed since the racing world had seen a Triple Crown winner (Citation, in 1948), and, with the country emerging from the long war in Vietnam, Americans were looking for something to get excited about.

Enter Secretariat, the second horse in the 1900s to be known as Big Red. Secretariat’s owner, Penny Chenery Tweedy, was very much interested in getting a piece of the financial action in all three races. The big chestnut stallion was ready to deliver on his owner’s expectations. The horse blistered around a fast track under partly cloudy skies on May 5, 1973, in Louisville, posting a record time of 1:59:40. No other horse in the chrome postcard era would see such interest in his image, as hotels, gift shops, and mom-and-pop stores across the Bluegrass State peddled Secretariat’s glossy frame on postcards that would be mailed to all parts of the globe, further enhancing the mystique of an animal who would take the Preakness in record time, then go on to win the Belmont by an astounding 31 lengths. 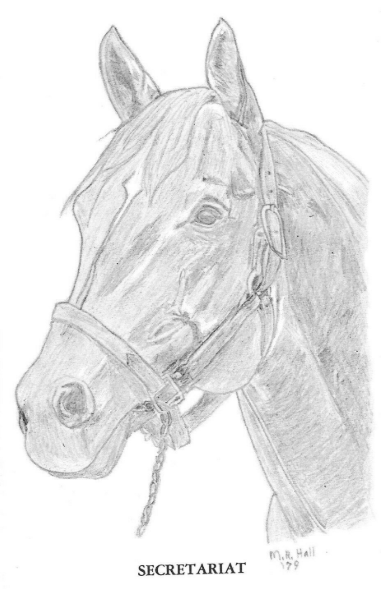 Tweedy retired Secretariat to stud at Claiborne Farm near Paris, Kentucky, in 1974. In the fall of 1989, Secretariat developed laminitis, a painful disease of the inner tissue of the hoof. He was humanely destroyed on October 4, 1989. An autopsy found that his heart was twice the average size, which may help to explain his speed. He was buried near his sire, Bold Ruler, and his grand-sire, Nasrullah, on Claiborne Farm.

Looking backward from today’s vantage point, where we have instant access to news events through television, on our computers, and in our pockets via smartphones, it is easy to forget the monumental impact of postcards in documenting, with still images, the happenings of note around the world. In the sports realm, which includes horse racing, this is especially the case, as sports were often bumped out of newspapers in favor of what was deemed more important news.

Thus, those early postcards of the Kentucky Derby and other Triple Crown races are more than just 3½” by 5½” paper keepsakes stored in shoeboxes and binders. They were important mileposts in sharing magical moments at the track, when one click of a photographer’s camera framed a fraction of a second that would be mailed across the country and ultimately valued by collectors to this very day.

Carl Howell and Robin Milby are award-winning authors of the book, Kentucky’s 120 Counties: A Postcard Album (1900-1925). The book was named a bronze medal winner for Best Regional Non-Fiction in the Southeastern United States in the 2019 IPPY awards. (The book is available at www.butlerbooks.com). Howell is a retired attorney from Hodgenville, Kentucky, and a former FBI agent. He has written several books about Kentucky postcards and images and is a noted Abraham Lincoln historian. Milby is retired from Dow Chemical and lives near Buffalo, Kentucky. He is a songwriter and former sports editor of the LaRue County Herald News, where he won several awards from the Kentucky Press Association.
PrevPreviousThe Barefoot Mailman
NextThe Treaty of BernNext
2 Comments
Oldest
Newest Most Voted
Inline Feedbacks
View all comments
Mary Schaefer

I have followed the Kentucky Derby every year since I was a child yet still found new information in this piece. Thank you for a very interesting article.