and A Great Story

You never know what you may find while looking at old postcards! Here is a not too exciting card that was published by I. Robbins & Son of Pittsburgh, Pennsylvania.  My first thought was “Nuts, the card is damaged and there is nothing I can do to fix it” (the small surface tear on message side); then I took a second look! 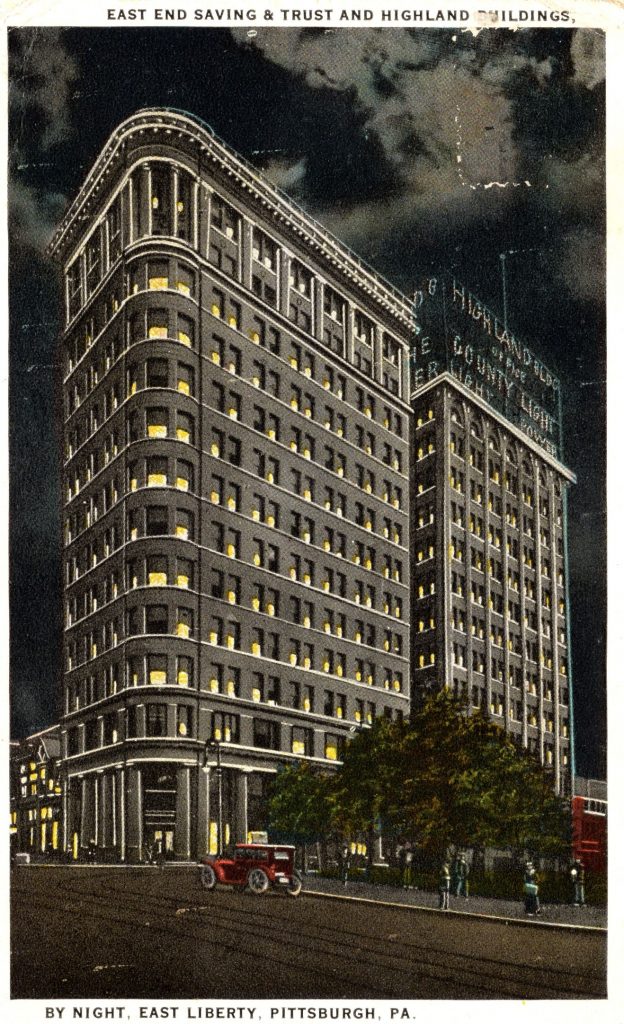 This card was posted on February 12, 1930. It shows the East End Savings & Trust and the Highland buildings, by night, East Liberty, Pittsburgh, Pennsylvania.  It is franked with a rather nice 5-cent Theodore Roosevelt stamp. In the hay day of the so called “penny postcard” why did this card need a 5-cent stamp?

The card is addressed to Mrs. A. P. Englert, c/o Steamboat “City of New York,” Sturrock (Cape Town) Ltd., Union of South Africa. As a result, the extra four cents were necessary to mail it such a long distance.

Next, I wanted to learn the history of S. S. City of New York. She was an American built ship made for the American–South African Line, Inc. of New York, New York. The ship was built by the Sun Shipbuilding & Dry Dock Company of Chester, Pennsylvania.  She was completed in February 1930.

The home port of the new 8,272-ton vessel was New York City. With this postcard’s cancelation date being February 1930, the card’s recipient was most likely a passenger on the ship’s maiden voyage to South Africa.

I also learned that the S. S. City of New York was ultimately sunk by the German U-boat U160 on March 29, 1942, while operating on her normal war time schedule about 50 miles east of Cape Hatteras, North Carolina.  With Captain George T. Sullivan commanding the ship was laden with 6,612 tons of chrome ore, wood, wool, hides, and asbestos along with 123 passengers and crewmembers. Over the following days, the U. S. Navy and Coast Guard rescued 107 passengers.

What about the “smudge” on the message side of the card?  Not a smudge at all; it is a print! The message reads, “This mark stands for Zumie saying hello.”  The smudge is a paw print . . . namely the “left paw” print of the sender’s dog. 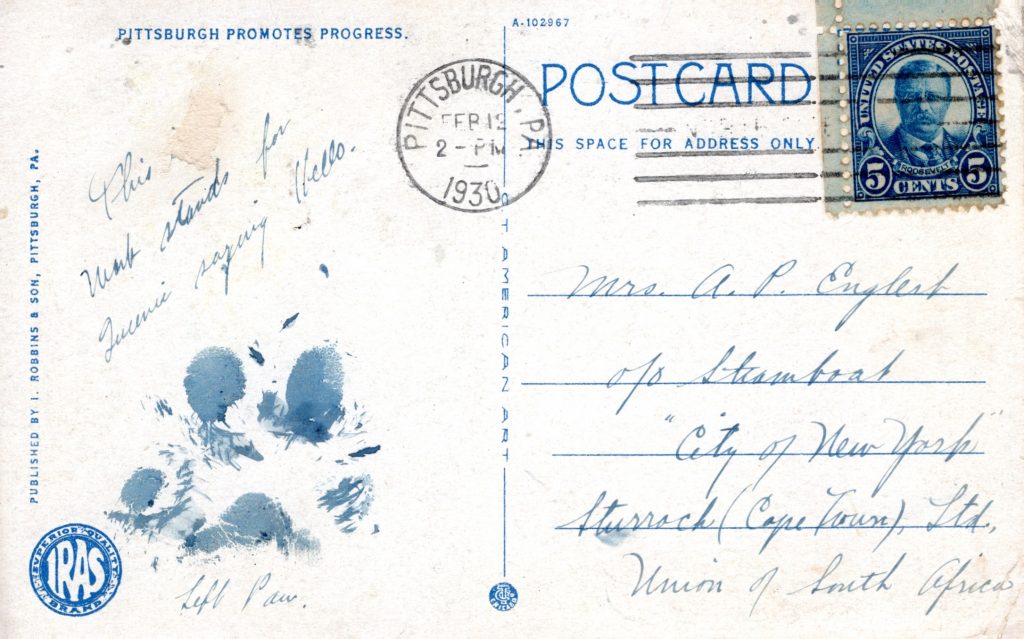 Postcards are open books to so many interesting things! History lessons like this, learned from such small pieces of paper are infrequent but can be found if you look, read, and are curious.

[Editor’s note to Postcard History’s readers: We want to thank Shav LaVigne for this contribution. Shav has the uncanny ability to recognize postcards that bring with them interesting stories, that prompt lots of questions. How many “left paw prints” have you seen on postcards? And, how many people would enjoy receiving one while on a trip to South Africa? These questions are prompts to search for information about the person who wrote on this card, then mailed it, and the person who received it. The following answers a couple of these questions. Sadly, the question of why Mrs. Englert was on the steamship City of New York’s maiden voyage remains unanswered.]

Mrs. A. P. Englert, the addressee, was likely the wife of Albert Peter Englert, the son of the owner and operator of the Englert Manufacturing Company on Jane Street in Pittsburgh, Pennsylvania. The company manufactured batteries. Even in their newspaper advertisements they conceded that their battery was more expensive, but cheaper in the long run for they last twice as long as the second best battery available to the general public. 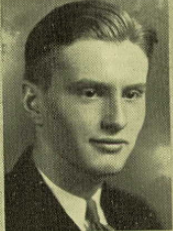 Albert Peter Englert was born in Charleston, West Virginia. He graduated from the Wharton School of Business in 1936. After his university days, “Al” worked as an estate manager in the Pittsburgh area and in smaller cities in Allegheny County. He died at age 89 in September 2003, and was buried at Calvary Cemetery in Pittsburgh, Pennsylvania.

Mrs. A. P. Englert was the former Justine L. (Lovingston) Diebold, daughter of Ferdinand Diebold. The Diebold family owned the Diebold Brothers Coal Company and the Wholesale Hardwood Flooring Company in Pittsburgh. Albert and Justine were married in September 1940. Sadly, tragedy befell this couple in the loss of their children, in August 1947 Justine’s namesake daughter was stillborn in Pittsburgh, and a second unnamed child was stillborn in October 1948. Justine died in 1971 at age 53.

The Staff of Postcard History offers this article for your enjoyment. It is a combined effort of many: our publisher, editor, webmaster and collectors/contributors far and wide. Please use the COMMENTS feature below to let us know how we're doing.
PrevPreviousWhere Was It Made – Part XI – Music Boxes
NextWinter Mail Delivery in Rural DakotaNext
3 Comments
Oldest
Newest Most Voted
Inline Feedbacks
View all comments
Dave

Card dated 1930, the two people described in the article were married in 1940. Isn’t the addressee more likely to be this man’s mother?

I loved that a little dog’s left paw print made in 1930 (90 years ago) still brings a smile to someone. So very sweet. Thank you for this story!

Love the paw print smudge. Especially since my dog’s name is Smudge!