and His Stories of the Great West

Man’s command of the language is most important.
Next to kissing, it’s the most exciting form of communication.
– Oren Arnold

If you knew Oren Arnold you have a good idea what he meant when he said, “Man’s command of the language is most important. Using language was how he lived for over seven decades.

In the months after graduation (May 1918) from Henderson (Texas) High School, E. Oren Arnold found himself at a crossroad junction in East Texas without a clue which way to turn. He was a scrawny kid with brown hair and brown eyes who stood only five feet eight inches tall. He knew what he wanted to improve his inside but had no clue how to improve his outside. He personified his mother’s description when she said of her son, “he has a dusty appearance and not a dime to his name.”

Arnold decided to turn south toward Houston where he enrolled in Rice Institute (later the university). Rice Institute had been open only six years, using funds that were part of a bequeath by its namesake William Marsh Rice. Rice made a fortune after moving to Texas in the late 1830s by investing in land, lumber and railroads. He was a lonely man and a philanthropic man.Perhaps too philanthropic, for in 1900, he became the victim in a murder case that was the first newsworthy crime in the new century. At the time the value of Rice’s fortune topped $4,000,000. The funds were used to provide curricula for deserving young people who needed help in finding a way to live a good life. It was all quite esoteric, but it fit Arnold because he was an intelligent man but had no common sense.

Arnold returned to his home in Henderson after two years at Rice and joined his brother Brady in a medical practice. This association didn’t last long either and he returned to his studies at the University of Texas in Austin. Now at age 21, he seemed to find his calling; free-lance writing, editing and publishing.

In 1927 Arnold married Adele Roensch. A few weeks later he was offered and accepted a job with the Arizona Republican. The young couple moved to Phoenix where their daughter Judith was born. He was finding a true and exceptional readership, while Adele was teaching in a nursery school.

In the mid-1930s Arnold decided he wanted to devote more time to writing. He never quit his job but devoted little time to it. His writing career began with a boom. In 1934 he published his first novel Superstition’s Gold. With a financial foothold deep in the Arizona desert, other novels, The Story of Man Against Winter (1966), Mystery of Superstition Mountain (1972), Guide Yourself Through Old Age (1976), and The Second Half of Your Life (1979) followed.

Arnold died in 1980, but there are many more stories to tell. Throughout the entire decade of the 1940s and well into the ‘50s, Arnold devoted all the time he had to charity and charitable organizations, including civic and religious groups. He was an elder in the First Presbyterian Church of Phoenix, a member of the Phoenix Kiwanis Club, and for many years an officer in the Phoenix Arts Council. He also produced one of the most popular postcard series of his time: the eighteen-card set entitled, Post Card Storiettes: Dramatic True Stories from the Great West. The set was published as Genuine Curteich “C. T. Art-Colortone” Post Cards between 1943 and 1944.

Below you see three of my favorites. Card #6 is about one of my ancestors. Card #7 is a tale of how some Arizona towns were named. And, Card #15 reports on how history often rewards good deeds long after a life has ended. 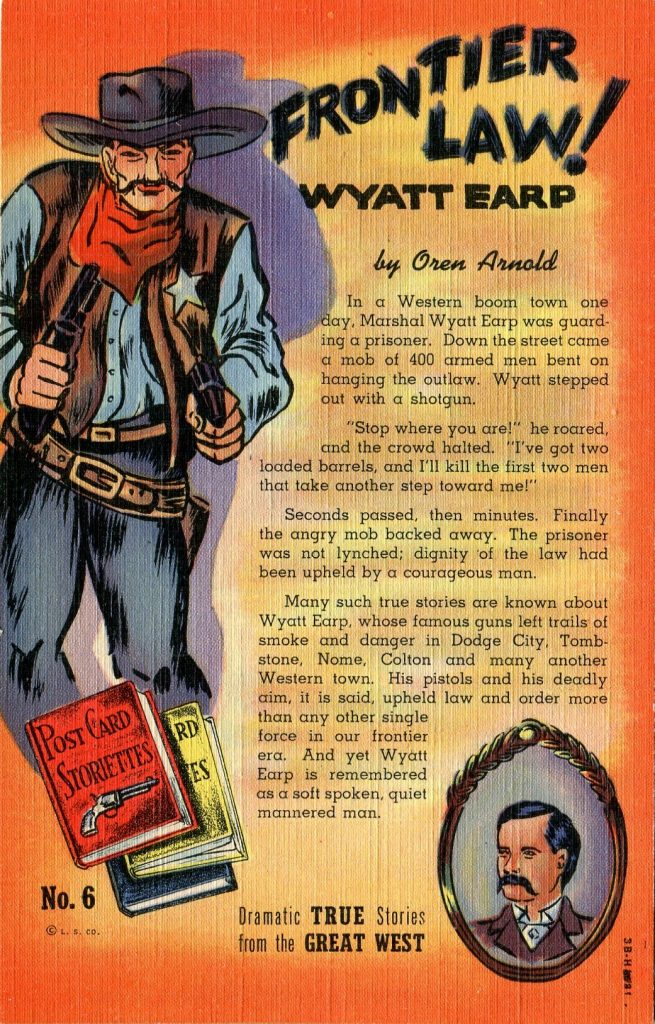 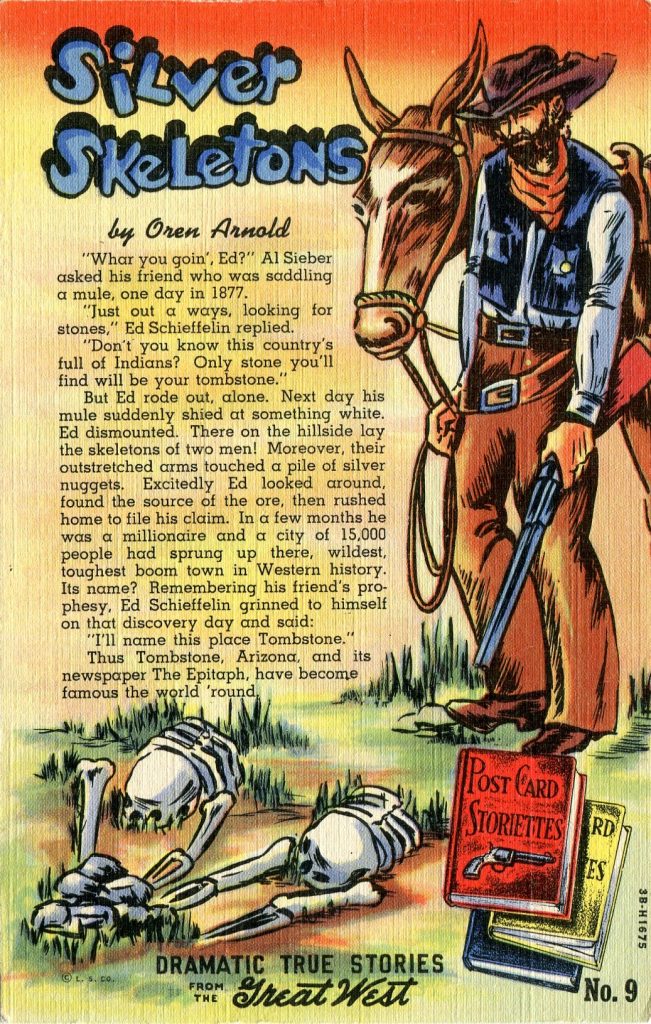 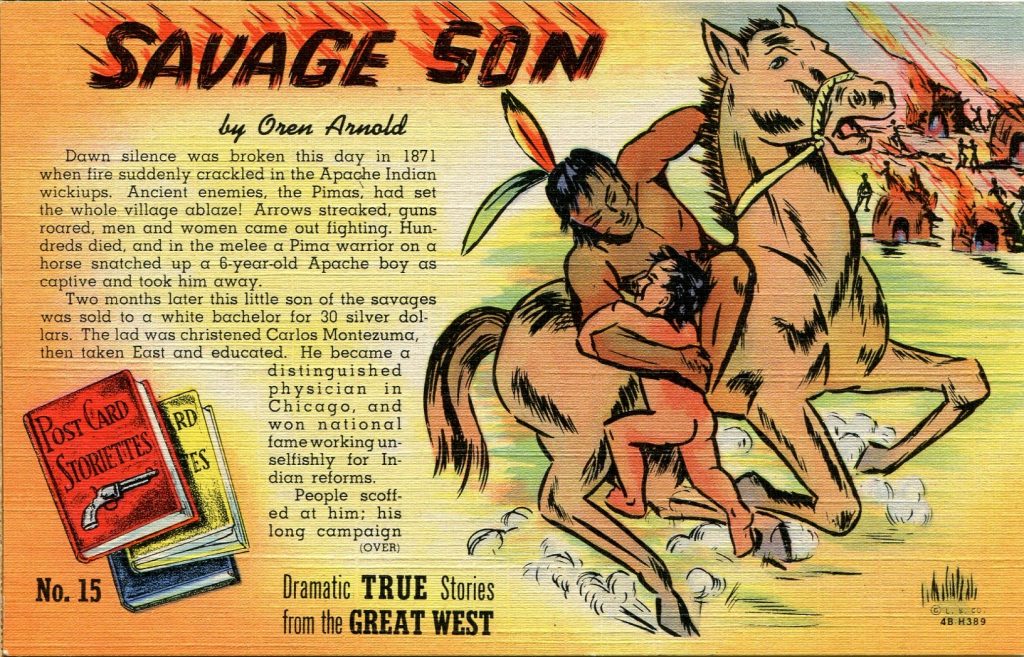 The following checklist may be helpful if you want to collect Oren Arnold’s stories.

Gun Feud to the Last Man

The Staff of Postcard History offers this article for your enjoyment. It is a combined effort of many: our publisher, editor, webmaster and collectors/contributors far and wide. Please use the COMMENTS feature below to let us know how we're doing.
PrevPreviousThe World Through the Lens of Lewis W. Hine
NextThe Handling FeeNext
1 Comment
Oldest
Newest Most Voted
Inline Feedbacks
View all comments
Christy

I just shared my collection on Facebook this week…Vintage Postcards From The Past. Love seeing this story about these colorful, interesting cards. Knowing the history of the card brings it to life in a whole new way. Thank you for, as Paul Harvey would say, the rest of the story.