Editor’s note: as you read the following, keep in mind that it was written over fifteen years ago. The online encyclopedia Wikipedia was only a few years old and among serious researchers there was a high degree of suspicion over the accuracy of most articles. “The Handling Fee” first appeared in the South Jersey Postcard Club’s quarterly publication: The McClintock Letter.

“Okay,” he said, “but if you don’t buy the book there is a one hundred-dollar handling fee.” This came from the sales clerk of whom I had asked a question. I was stunned.

I was killing time one sweltering afternoon last June in New York City when I came to a small book seller’s shop in the Upper East Side; somewhere in the 90s – around 95th, I think. Not having had an opportunity to shop for antique books in New York for some years, I decided to waste a few minutes by browsing the shelves holding religious titles. Within minutes I found a book I wanted, or at least thought I did. It was displayed in a glass case at the end of a section of books labeled with one of those brass plaques engraved with the words Religions of the World. It was a beautiful book and its character screamed quality. The title: The Book of Job, as translated from the original by Rabbi Abraham Elzas; with some comments on the poem by Elbert Hubbard.

So far so good, everything was reasonably straightforward until I saw a tiny, typed sign (who types anything anymore?) in the corner of the case.  It read:  If we open this case and you do not buy the book, you will be charged a $100 handling fee.

Wow!  I wasn’t killing time; I was about to be robbed. Within a few seconds I felt the eyes. You know what I mean, the eyes of a salesclerk watching you. “May I be of assistance?” he asked.

“I don’t think so.  No!” was my immediate and emphatic reply, “But may I ask you a question?  What is that little sign about?”

His reply was a canned speech and I was trapped. “You know,” he started, “Elbert Hubbard was a very famous man, he is even listed in Wikipedia.” 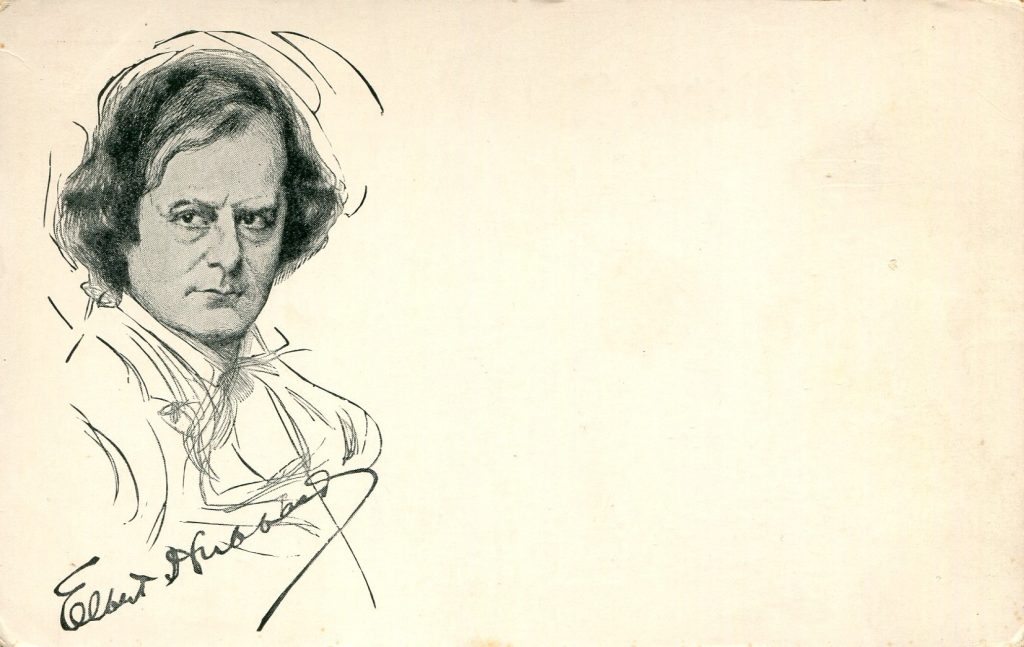 Hold it, I thought.  This is a red flag minute.  If I had never lived through one before, I was now. “Get me the hell out of here,” I thought. Here was a young man who appeared to have reasonable intellect, he was dressed well, working in (or maybe even owning) a New York City business establishment, declaring to me, a certified curmudgeon who has learned Internet surfing and email out of self-defense, that someone is famous because he is listed in a free, online, user written encyclopedia.

The fact of the matter is, I knew who Hubbard was long before this guy was born. I easily remember from reading history that Hubbard was an author, and as well, a political and social malcontent. He was among the passenger victims killed on May 7, 1915, when a German U-boat torpedoed the RMS Lusitania.  The irony being that Hubbard was traveling to Germany to do an interview with Kaiser Wilhelm.

Frankly, I didn’t want to hear anything else this lad had to say. Whatever else was to come would be even less exciting than Elbert Hubbard being written up in an Internet encyclopedia. All else considered, I’m 76 years old, my heart could not stand any more.

“Nineteen hundred dollars,” he said in a tone of complete indifference. “Plus tax,” were the last words I heard as I escaped and the front door closed behind me.

When I got to a computer that night in the Hotel Wales on Madison Avenue, I looked up the website of my new favorite bookstore, that I will never visit again. Sure enough, there it was – at a smooth $1900 plus tax. I studied every image on the site out of curiosity. I had no plan to use my new knowledge, but now I’m glad I spent the time.   I learned a lesson that day – don’t ask questions about the obvious. I paid dearly for it; the cost was: I had to endure that insufferable imp telling me who Elbert Hubbard was.

To my dear readers, Thank You!

I would have likely forgotten this whole incident and never written my memory of it except for one fact. At a recent postcard show I found the card I show below. Guess who! 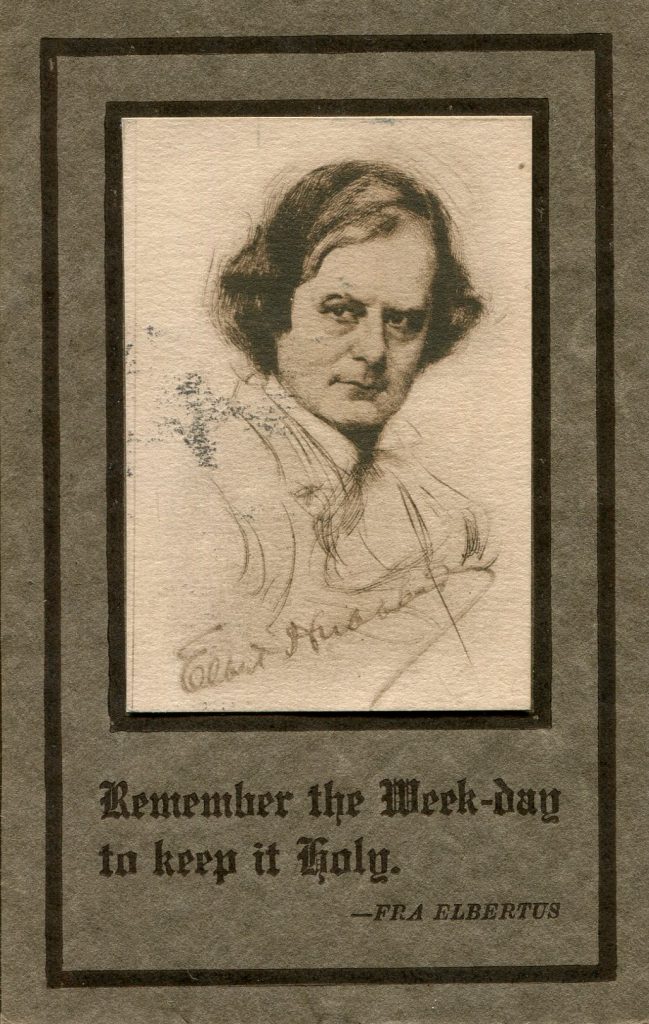 Signed; Elbert Hubbard, with a quote from Fra Elbertus, “Remember the Week-day to keep it holy.”

Dr. Donald T. Matter, Jr., was a retired eye-surgeon from Long Island, NY. After giving up his practice, he moved to Arizona, but continued to collect postcards. He also traveled the globe doing eye-surgery on animals. When Don passed away his collection of more than 30,000 cards was auctioned.
PrevPreviousOren Arnold and His Stories of the Great West
NextThe Three Little PigsNext
4 Comments
Oldest
Newest Most Voted
Inline Feedbacks
View all comments
Will Parkhurst

Love these articles when I have time to read them!

Hi Will, Hey, they’re short enough! Besides, you’ll learn a lot. We haven’t done on yet on rebuilding an old house, though, so I suppose we come in second. Hoping that your talk will be allowed in the Fall.

I’m familiar with Elbert Hubbard because the “Cryptoquote” puzzle in the local newspaper occasionally features one of his statements.

Hi Bob, the Roycroft community was one of America’s answers to the British Arts and Crafts movement. Hubbard was one amazing man. I have absolutely no skill at cryptoquotes, so I’m glad you can handle these! Glad you like the article. Do you know if there are very many postcards of Hubbard?