One day in 1853, really, it was 1853 when it happened. A sow decided it was time to send her sons off into the world to make their fortunes. She wasn’t very clever with names so, let’s call them Pig One, Pig Two and Pig Three.

The first decision the three pigs made was to build their own houses. Pig One, who wore green coveralls, set to work immediately. He finished in a very short time. Using straw was an easy and quick way to build. He set a framework in place and piled hay on top until the roof over his head kept the rain out. Pig Two and Pig Three watched. They weren’t impressed. It’s been lost to history which pig asked his brother, “What will you do if a big, bad wolf comes for a visit?”

“Okay, we’ll see you later,” said the other pigs and they left.

Pig Two, who always wore blue shirts, walked about a block away and said to Pig Three, “I think since our brother used straw, I’m going to use sticks. It may take longer, but I’ll feel safer.”

“Do you think it wise to use only sticks?” asked Pig Three. “If you want to be safe, why don’t you use something stronger? What will you do if a big, bad wolf comes for a visit?”

“I’ll be fine,” Pig Two said to his brother.

Three walked much farther, all the way to the first brickyard he found. He walked so far that his orange and green striped bibbed overalls were already dirty. “Say, I’ve got a great idea! I’m going to build my house with bricks,” he said to himself.

According to the History of Pigs, a textbook used at the PIG Elementary School, Pig Three was the first ever to use such a strong building material for his house. He became know as the Wise Pig.

Wise took a long time to build his house. First he planned a house to have a sturdy design. Then he installed a foundation and laid each brick with care. The house had a window and a nice fireplace with a tall chimney. Wise Pig also took time to decorate his house; he had curtains on the window and a big pot to cook his meals in the fireplace.

Some time went by, no one knows just how long, but a day came when a big, bad wolf did come to the neighborhood. There were no grocery stores and the wolf was very hungry. He decided to visit Pig One’s house of straw. The Bad Wolf knocked at the door and in a harsh, deep and loud voice he called, “Little pig, little pig, let me come in.”

At once he got a reply in a screeching high and shrill voice, “No, no, not by the hair on my chinny chin-chin.”

Now the story gets foggy, some say the wolf announced that he would huff and puff and blow the house over. Which he did and then ate the pig.

Another says the wolf said, “Then I’ll huff, and I’ll puff, and I’ll blow your house in.” Over or In, what does it matter? Though in this version the wolf goes hungry and the pigs run to their brother’s house.

Either way after a couple of successful attempts at house wrecking, the wolf was foiled by the Wise Pig. The wolf couldn’t blow over the brick house and soon found himself in the Wise Pig’s stewpot after climbing down the chimney.

So the moral of the story is, if you’re a wolf don’t mess with a Wise Pig.

WHAT? What do you mean? You really don’t believe a word of what you just read? Well, here’s proof.

There Were Three Little Pigs
a twelve postcard set published by Dexter Press, West Nyack, New York ©1959
Dexter would never make a whole set of postcards if the story wasn’t true, would they? 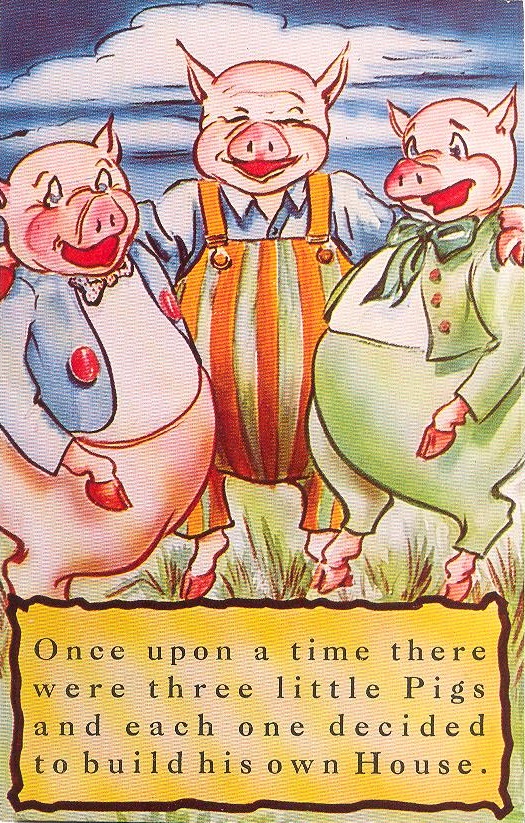 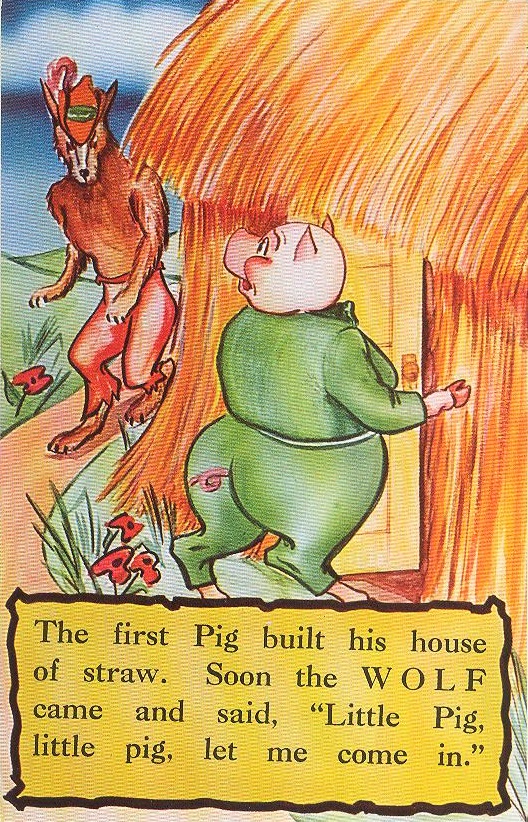 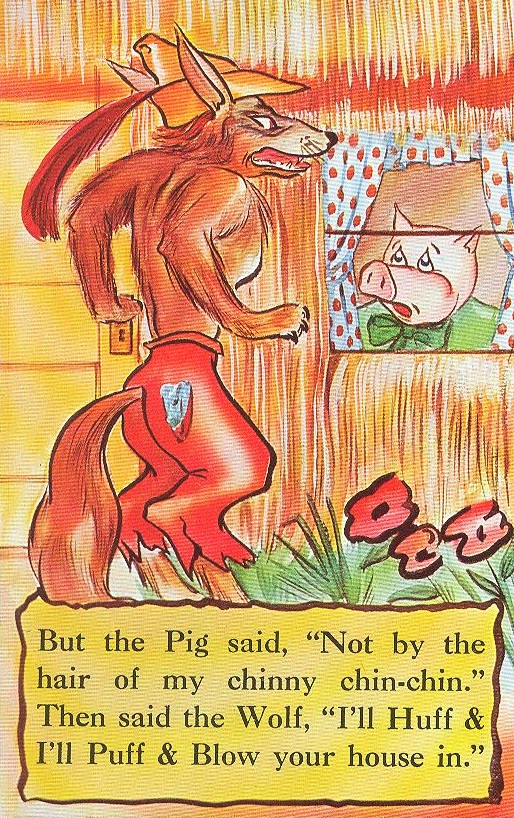 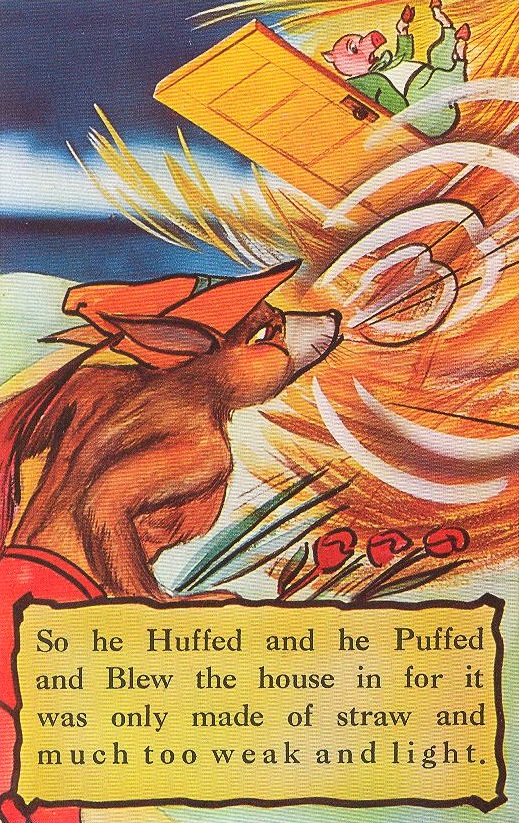 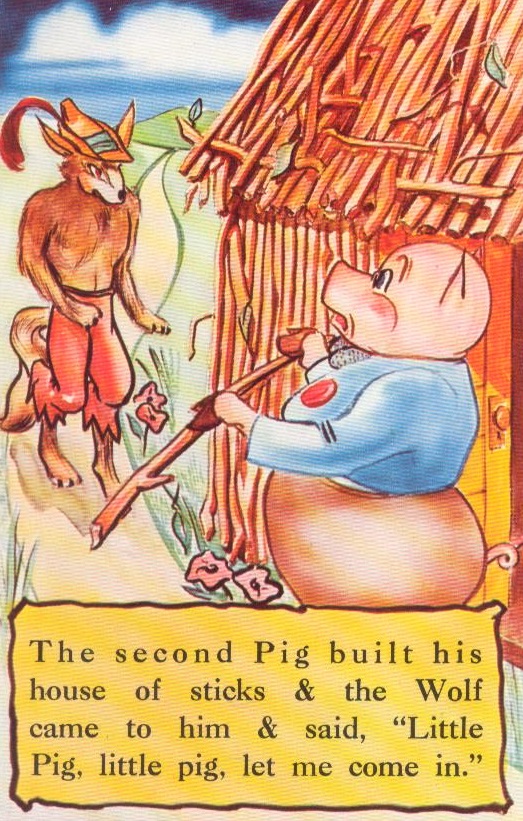 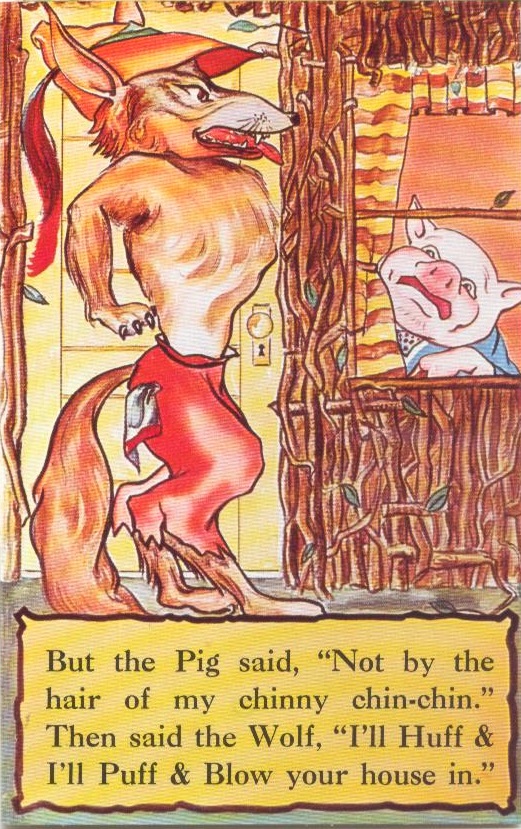 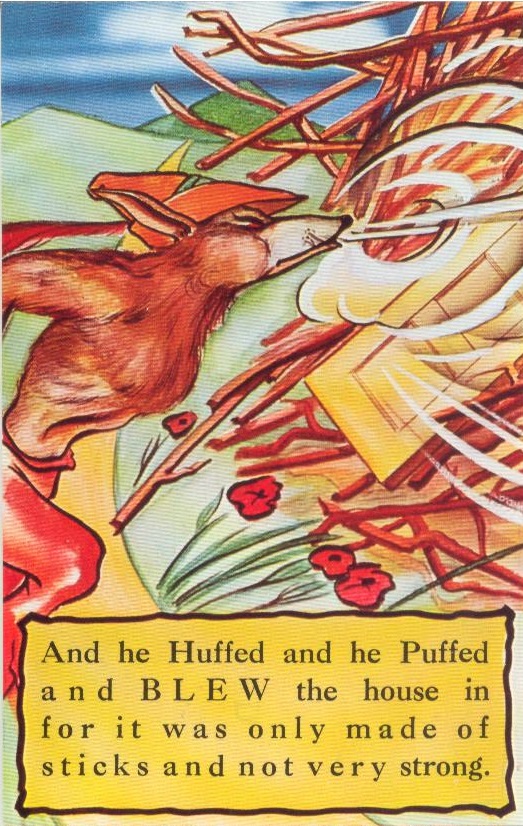 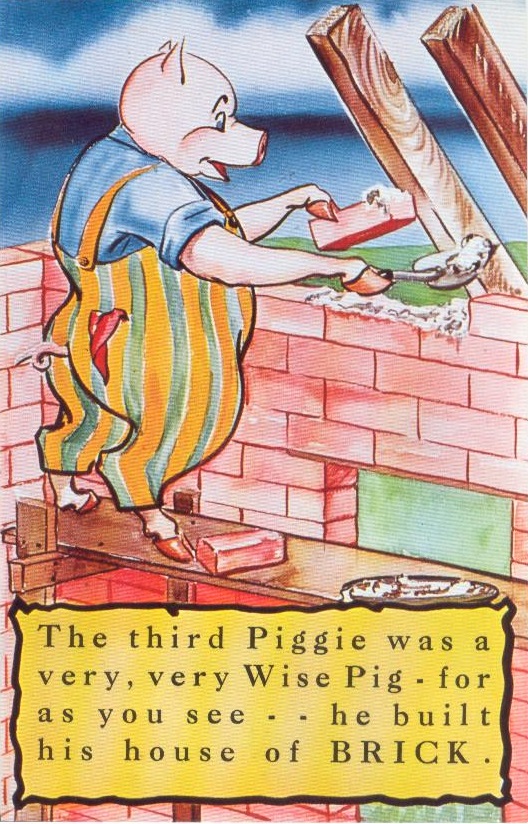 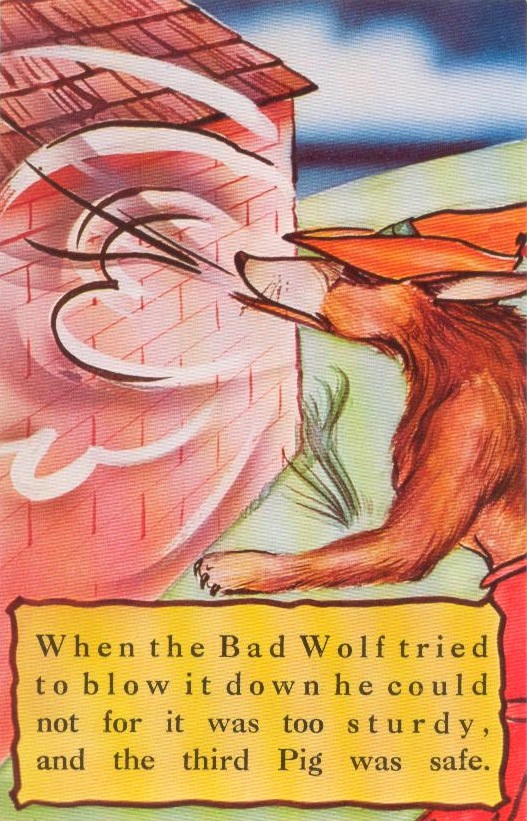 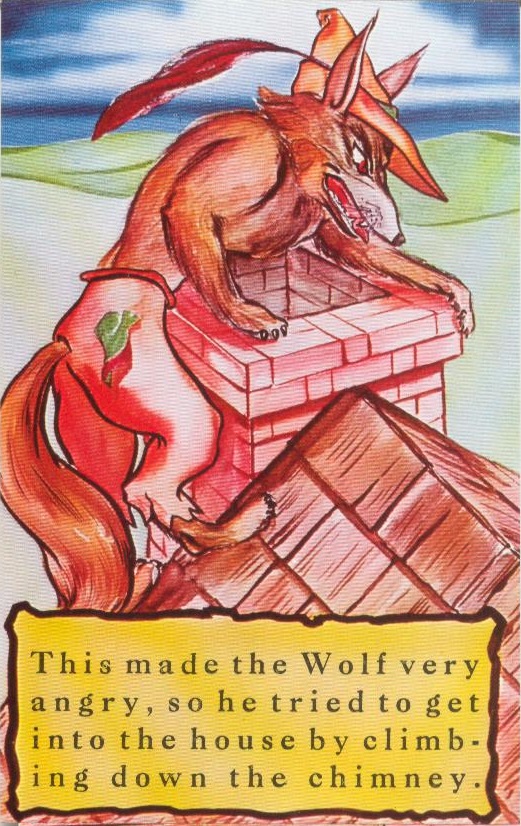 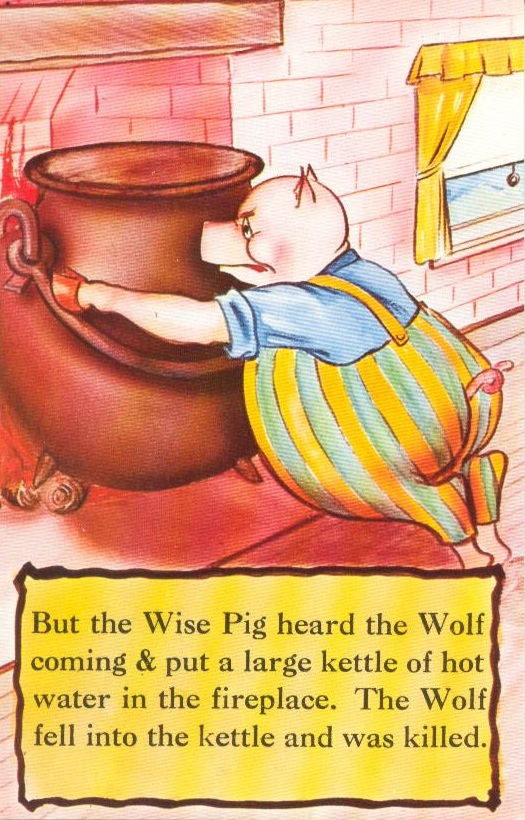 In the Disney cartoon, the straw house is built by Fifer Pig, the stick house by Fiddler Pig, and the brick house by Practical Pig.

Who was the artist of these three little pigs cards?