Where Was It Made
– Part X –
Thread

Have you ever thought about thread? It may be that few people have. Consequently, we are going to learn about thread together. But first, it is only cotton thread that we are learning about. We will leave silk, silk thread and all things-silk to the Asians for another time.

Did you know, in primeval times sewing thread was narrow strips of animal skin? It is reasonable to assume that to be the case, but sadly it took a long time for civilization to reach a point of general understanding that plants could serve humanity with great efficacy. The Egyptians were the first to learn that if they twisted the fibers of what is known today as cotton, they could make thin threads that they then could weave into cloth and that cloth could be used for . . . well you get the idea. That was 7,000 years ago. 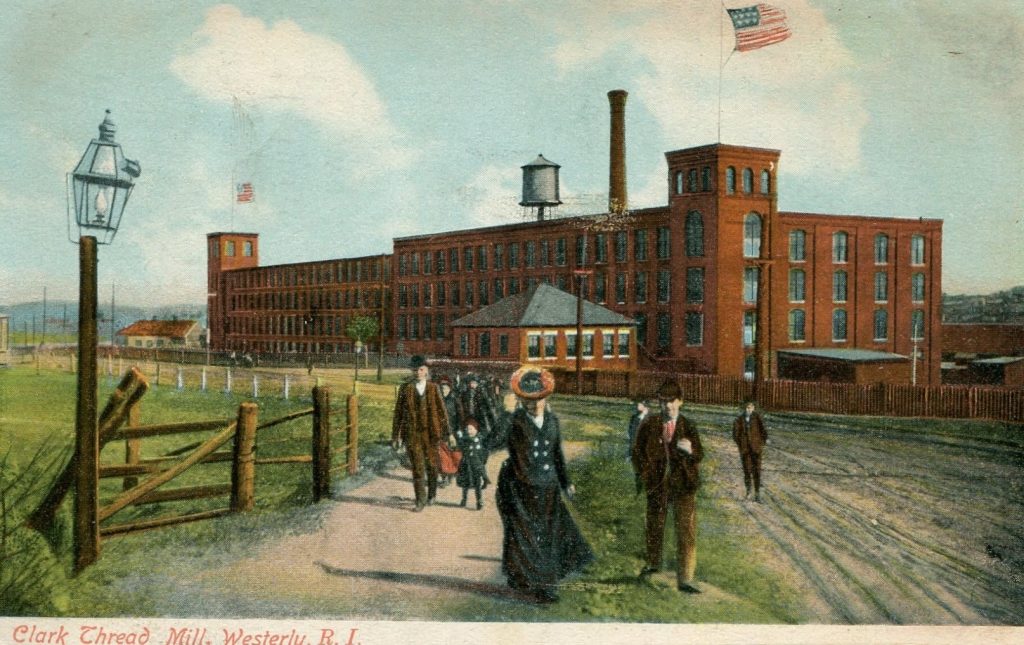 Let’s move up in time to the 1730s and to England where the first thread mills appeared. The British, at that time had the idea that Britannia should rule the waves and the world. Thanks to British colonization the world learned to use thread for the colonials took it wherever they went.

Only twenty years after the first machine made threads gained popularity the Clark Family (James and his brother Patrick) established a mill in Scotland. That was the beginning of a business enterprise that lasted over 250 years and spread to three continents.

The Clark Thread Company is not unusual. It was a family concern and throughout the late decades of the 18th century and early 19th century different branches of the family would take it upon themselves to make their own fortunes. This was done using the family’s wealth to create similar milling facilities in different locations in the British Isles and North America.

The first Clark Thread Company was established in Paisley, a town located in the west central lowlands of Scotland. Paisley is just west of Glasgow along the White Cart Water, a tributary of the River Clyde.

Politics and the Napoleonic wars (1803-1815) interrupted the import of the silks and wools used in the area mills to manufacture the world-renowned Paisley shawls. Self-preservation prompted the Clark company to create a method of plying cotton yarns that were used to make thread that was similar in appearance and strength to that of the silk formerly used by the Paisley weavers.

The new cotton thread was introduced in 1812 and by 1817 the Clarks had a new mill dedicated to the production of cotton thread.  Next came thread on wooden spools, and by the mid-1820s, the joke was told that the Clarks needed help getting to the bank.

Clark made its way to North America in the 1840’s. They began by sending commercial agents to the United States. In spite of some legal restrictions on the production and sale of cotton due to the American Civil War, Clark’s sales in America increased. So much so that in 1863, the George A. Clark & Brother company was formed, and their mill began manufacturing in Newark, New Jersey. That enterprise became Clark & Company in 1879.

As the decades passed, Clark thread was improved and through a series of buyouts and mergers in 1896 with J. & P. Coats and 1897 with several minor thread makers and again in 1952 and 1954 when Coats and Clark Company decided upon a complete merger under the name of Coats & Clark. Other mergers have occurred as late as 2003, but Clark thread is still available in every thread shop and department store from coast to coast.

So, in this episode of, “where did they make it – thread,” the answer to our keynote question is … everywhere or at least lots of places. The postcard here is the Clark Thread Mill in Rhode Island. It was founded in 1892 by William Clark and is today a well-preserved example of a late 19th-century mill.