The DelMarVa Peninsula is only 70 miles wide by 183 miles long. The state of Delaware is bound on its eastern side by the Delaware Bay while the western side of the peninsula is composed of seven Maryland counties and two Virginia counties, all but three of them bounded by the Chesapeake Bay.

Until the Bay Bridge at the north end of the Chesapeake Bay was built in 1952 (connecting the two parts of Maryland between Annapolis and Kent Island), the Peninsula was accessible only from the north through southern Pennsylvania or by assorted ferries from the western shore of Maryland. At one time a passenger railroad line ran the length of the Peninsula, but it was discontinued in the 1950s.

DelMarVa was a rural world composed (if one excludes Wilmington, which lies above the Chesapeake-Delaware Canal) of vast expanses of farmland dotted with small villages and towns, most along the coasts. They were mainly dependent on agriculture and maritime activities — canning and shipping crops like peaches, fish, clams, and oysters — north to Baltimore, Philadelphia, and beyond. The DelMarVa Peninsula was, as Nancy Churchman Sawin titled one of her books, the place “between the bays.”

Nancy Sawin was a fifth-generation Delawarean whose father was an executive with Dupont. Her talents lay in field hockey, mathematics, teaching, and art. Upon graduating from college, she returned to her then-rural home in what is now suburban Wilmington where her mother had established a school named for her brother, Sanford, who had died early in life. Sawin became a teacher, athletics coach, and administrator there and eventually served as the head of this now widely renowned college-preparatory day school. In 1974 she retired at 57. 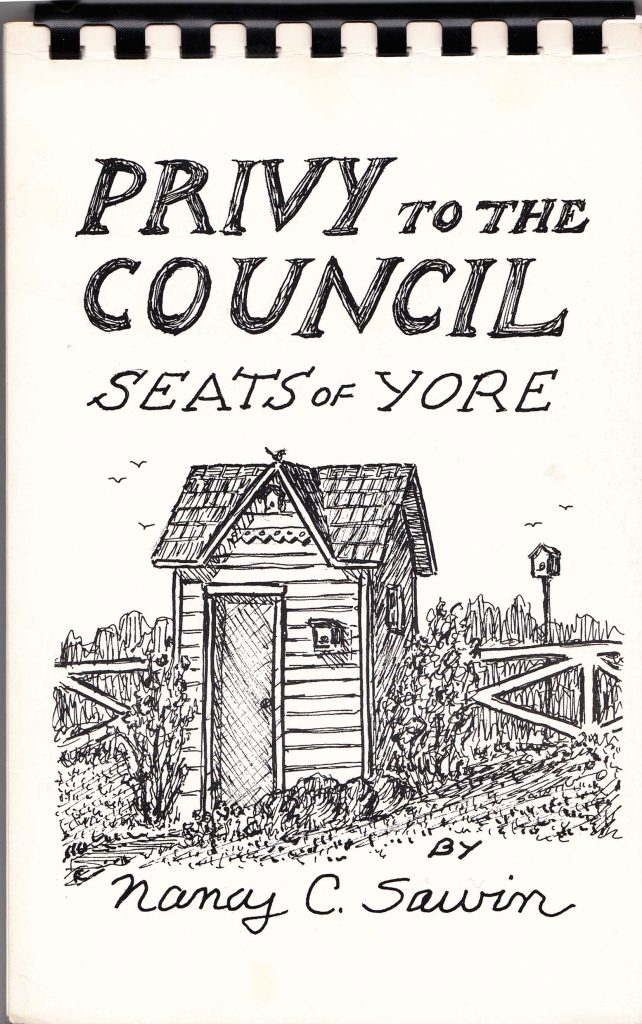 In her retirement, Sawin devoted her time to writing and illustrating books on the local history of Delaware and Eastern Maryland (two other books covered her love of field hockey, a third was a history of Sanford School, and a fourth detailed her visit to China). Her first book, Delaware Sketchbook (1976), was soon followed by others, notably Between the Bays (1978, covering scenes from the three Maryland counties between the bottom of Delaware and the two eastern counties of Virginia), RFD Country Art (1982, sketches of mailboxes), and Privy to the Council, Seats of Yore (1987, sketches of outhouses). She chronicled her 1985 trip to China in China Sketchbook.

And on at least 117 occasions, she turned her sketches into postcards.

I say “at least” because that’s how many Nancy Sawin postcards I have. She may very well have produced many more, because there are usually that many illustrations in each of her books, but after 10 years of collecting her postcards I’m not finding any new cards on the auction sites or at shows.

Her cards are distinctive in several ways. They vary from 4 to 4¼ inches high and from 5½ to 5¾ inches wide. They are almost always horizontal in format. Given this variation, I’ve come to believe that paper stock she used (white Tweedweave, a paper made by the now-extinct Curtis Paper Company at its Newark, Delaware, mill) was cut from larger sheets so she could photocopy the cards rather than have them printed. They show the publisher as “North Light Studio, Hockessin, DE 19707,” her home. 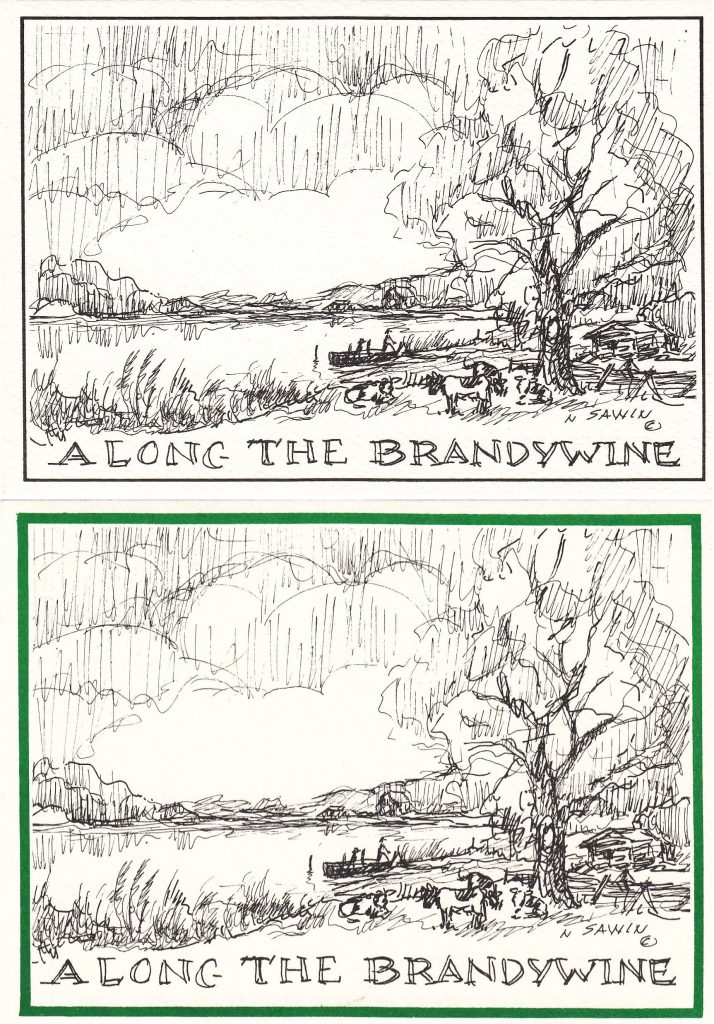 For holidays, Sawin created variations of several cards with solid red and green borders and holiday greeting text. And for friends and clients she also painted “portraits” of their homes.

Nancy Sawin died at 90 in 2008. You’ll find her cards on the various postcard-selling websites, though they don’t appear as often as they used to. Her books show up more frequently.

John Moll was born in Reading, Pennsylvania sometime between 1908 and 1910 (published sources differ). He studied art in Philadelphia and the Wilmington (Delaware) Academy of Art under Frank Schoonover and N. C. Wyeth. During the Depression he worked in the Works Progress Administration and illustrated the book Delaware, A Guide to the First State for the Federal Writers Project.

Moll was a commercial artist, the full meaning of which is that he made art for money. He supported his family and bought a house in Oxford, Maryland in 1946 where he worked for the rest of his life, producing a wide range of work — murals, book illustrations, placemats, note cards, watercolors and oil paintings, Christmas cards, kitchen tiles, stone lithographs — and postcards. 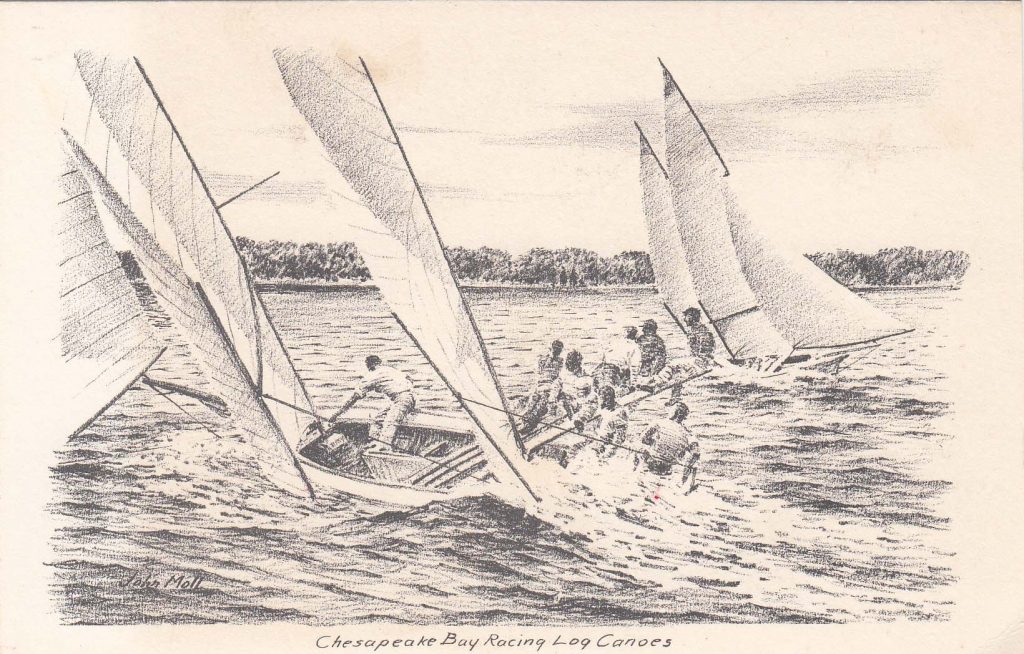 It’s tempting to pigeonhole Moll’s postcards as Eastern Shore maritime art, as so many of them depict scenes of the Chesapeake Bay. The error of that is found in the many cards depicting scenes not only in Maryland but also in Delaware, Virginia, Washington D.C., and even Dallas, Texas. These cards are essentially pencil sketches which he refined for printing.

Moll initially published his postcards (variously signed “J. B. Moll, Jr.,” “John Moll, Jr.” or “J. B. Moll”) on his own, as “Drawn And Published By J. B. Moll, Jr., Oxford, MD.” In later years some of his cards were printed by Albertype with the usual vertical statement as the divider. In 1974 Moll became affiliated with Heritage Art Publishers of St. Michaels, Maryland, which continues to market his non-postcard work today. 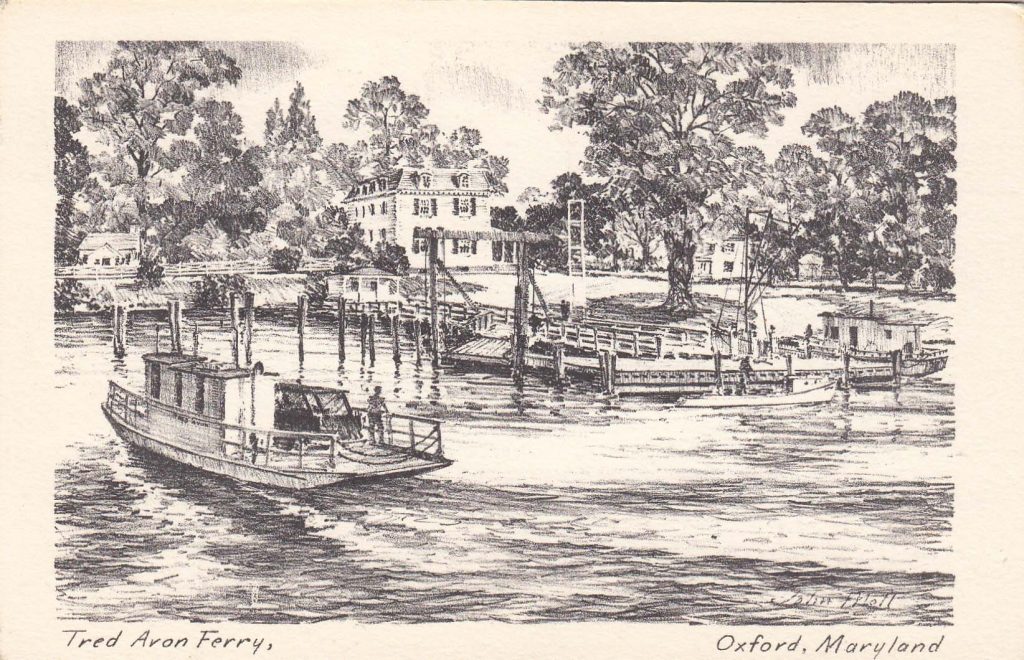 The catalogue for “A Special Sense of Place,” a retrospective exhibition of Moll’s entire output at the Oxford Museum in 2009, suggests that postcards came to his attention when he worked for the WPA in 1930s and saw how other artists were selling postcards for places like Key West, Florida. His postcards were, according to the catalogue, “a financial mainstay throughout his career, selling in the tens of thousands.”

Betty Moll was a canny business manager for her husband, operating on the theory, according to their daughter Deborah, “that they shouldn’t charge high prices for Dad’s work because, she would often say, people do not have to buy art.” Perhaps as a consequence, it was not surprising that many homes throughout the Eastern Shore have John Moll lithographs or paintings hung in over their fireplaces.

In 1969 Pete Seeger wrote Moll a flattering letter asking him to do a sketch of the Hudson River Sloop Clearwater. “We don’t have much cash to pay you, but we could give you some great sailing.” There is no record of Moll taking the job.

While Moll did lithographs and of course watercolors and paintings in color, I have found only one postcard in color. 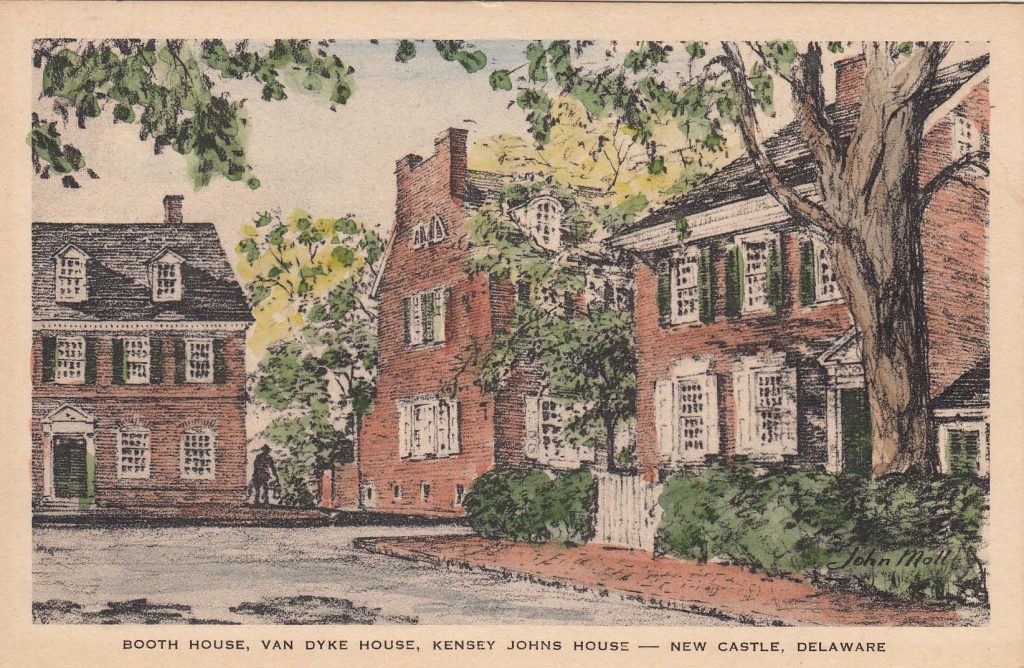 John Moll died in 1991. He was an artist grounded in the Eastern Shore of Maryland and his postcards preserve that special sense of place. They appear often enough on the auction sites under his name, but not always, which keeps the search interesting.

Bill Burton began collecting Ossining, New York postcards when he lived in that Hudson Valley town. His collection expanded, of course, to include his college, the neighboring towns, and places where he and his wife traveled. In retirement, he's refocused on Delaware and the DelMarVa peninsula towns, but he’s just as likely to be found parked in front of the 25¢ boxes at shows.
PrevPreviousWhere Was It Made – Part XII – Postcards
NextLawrence Welk – Musician and Showman!Next
2 Comments
Oldest
Newest Most Voted
Inline Feedbacks
View all comments
Ellen Richardson

Both interesting stories! I have always loved pen and ink as well as pencil drawings.

The cards are really attractive. Sawin’s books are full of her sketches. Thanks for reading, Ellen.