As a child growing up on the Great Plains, Lawrence Welk was a name all of us kids knew. His TV show was one all our parents watched. Most of us were less impressed with the Welk show but television was something new and exciting even if the show was not of our choice. We got two stations and what the parents wanted to watch is what we watched. So, we kids watched and listened as the bandleader would speak in his German accent like our grandparents spoke. But then again, didn’t everyone’s family speak that way? What did we know!! We had never heard anything else.

Let’s back up and figure this guy out just a bit. Lawrence Welk was a first generation American. His parents had immigrated to the USA in the last part of the 19th century and homesteaded on the prairies of North Dakota. Lawrence was born on March 11, 1903 and grew up in North Dakota, but he only went to school until he completed the fourth grade. That was not all that uncommon at that time; after all, he was likely going to be a farmer just like his dad.

I think it is fair to say that Lawrence had other ideas. He managed to acquire an accordion with the help of his father. It was a mail order purchase. I am sure he learned to play that accordion on his own. We called that “playing by ear.” Lawrence soon had a small band and played locally as a teenager. Although I do not know for certain, it was likely more a trio and Lawrence was the accordionist. He would go around to various parts of the Dakotas playing mostly at barn dances. They were common at that time and would be hosted by willing farmers who would clear out the haymow where Lawrence’s band would play. People would gather from around the area, listen and dance to the music. It is family folklore that my grandfather hosted him on at least one occasion. That story was told to me when I was young, and it stuck with me as I would see him saying “A vun and a two” along with the champagne bottle pop. Here this guy is, on television and I had never yet been more than 80 miles from home in my whole life! Little did I realize that this was going to be a future postcard category I would collect.

It is said Lawrence stayed on the family farm until he was 21 years old, but I am sure he was gone many nights as he started to play to bigger venues around the Dakotas. He made it to Sioux Falls, South Dakota where he was introduced and played on live radio and his popularity grew. Soon, he was playing for audiences in Minneapolis, Minnesota. He was popular for two decades in the Midwest, but Lawrence was ready for bigger things. In 1951 he headed west with his orchestra. 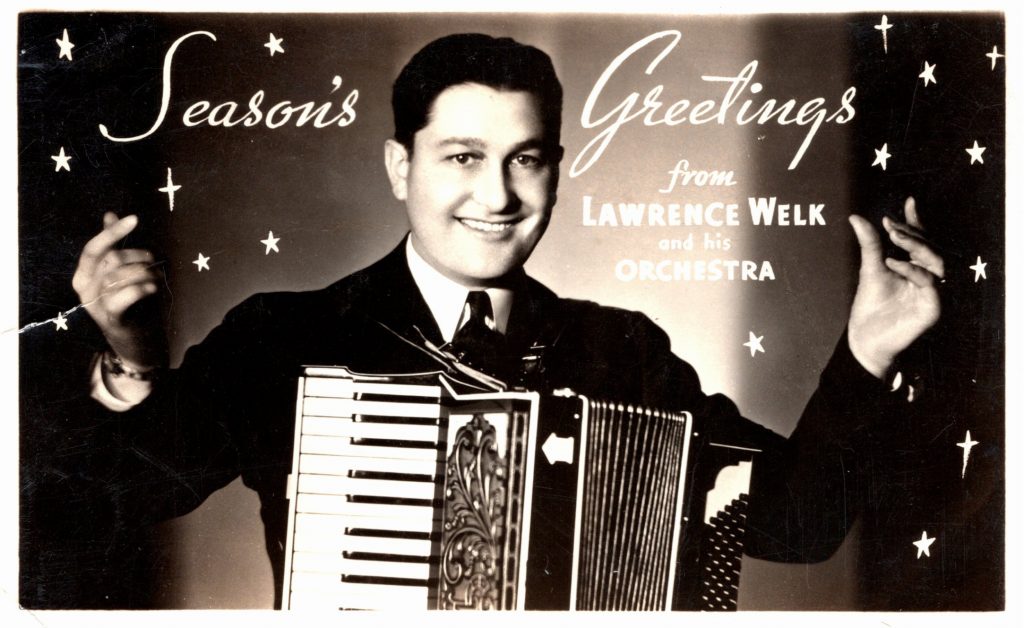 Ultimately, through some stroke of luck, Lawrence Welk made it to California and took up residence with his orchestra at the Argon Ballroom in Pacific Ocean Park in Los Angeles. That following year, he appeared on a local television show. In 1955 his show was picked up by ABC and stayed with that network until 1971. After the show was dropped by ABC, Welk decided to go it alone and independently arranged a syndication deal that kept him on the air until 1982. Certainly, his fame grew and so did the orchestra. 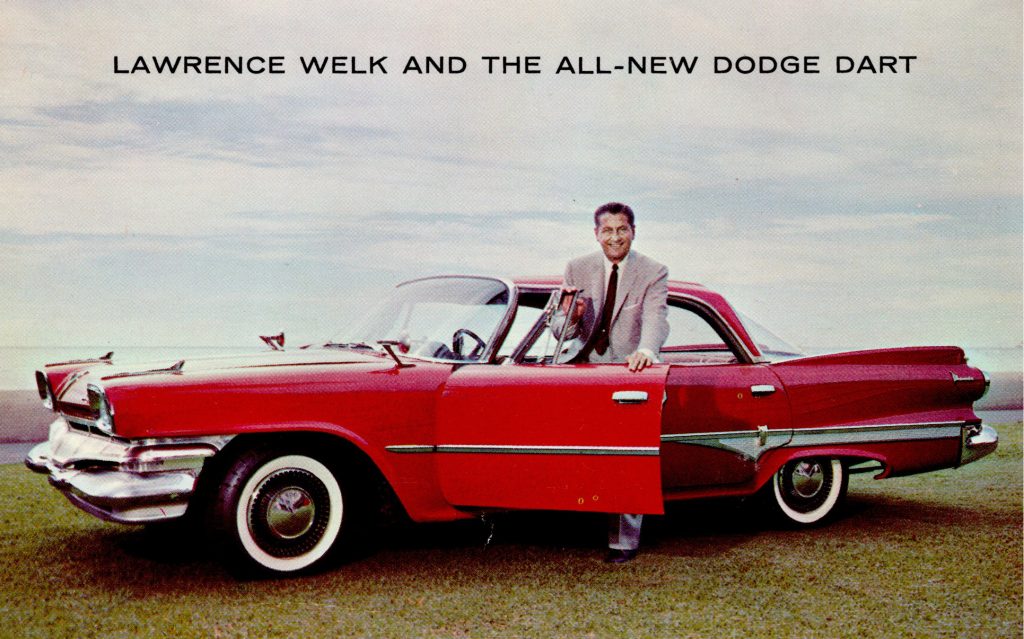 Lawrence had many talented individuals on the show but also pulled in a few from the Dakotas. Two such individuals were Myron Floren, of Webster, South Dakota, who joined the orchestra in 1950 and became the accordionist. The other regular in the orchestra was Jimmy Klein, from North Dakota, who joined the orchestra in 1951 as the drummer. Lawrence stayed close to his roots even with the success he had achieved, but Lawrence had now shifted his focus to being a showman who we saw on those weekly broadcasts.

As time went on, the show matured and yet other musician and dancers were added and yes, some left the show headed to their own careers outside of the Champaign Music Makers family. 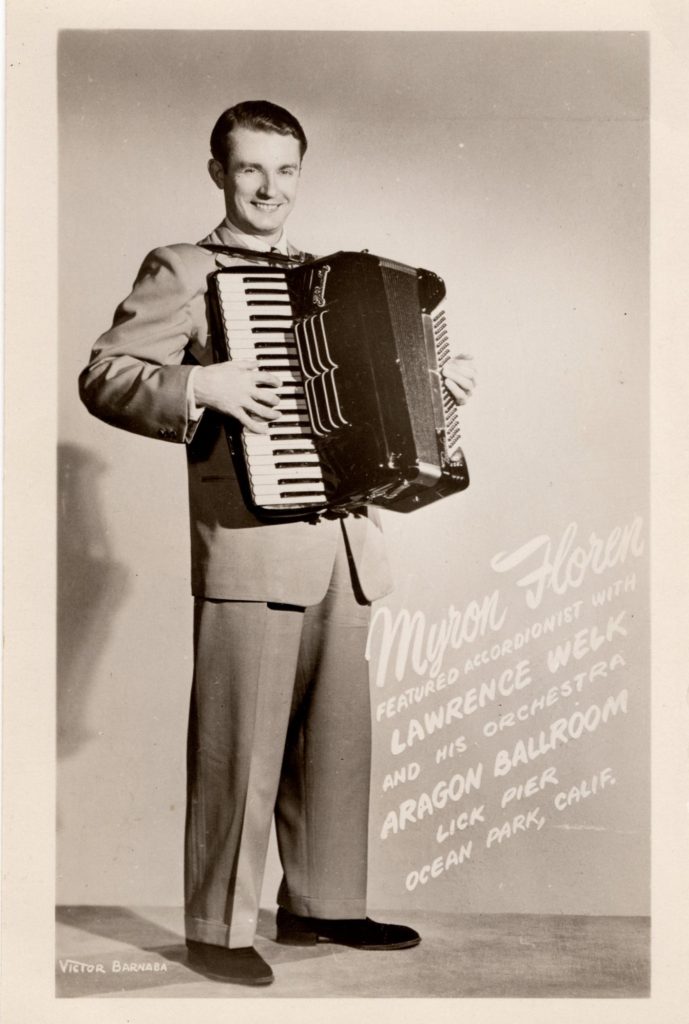 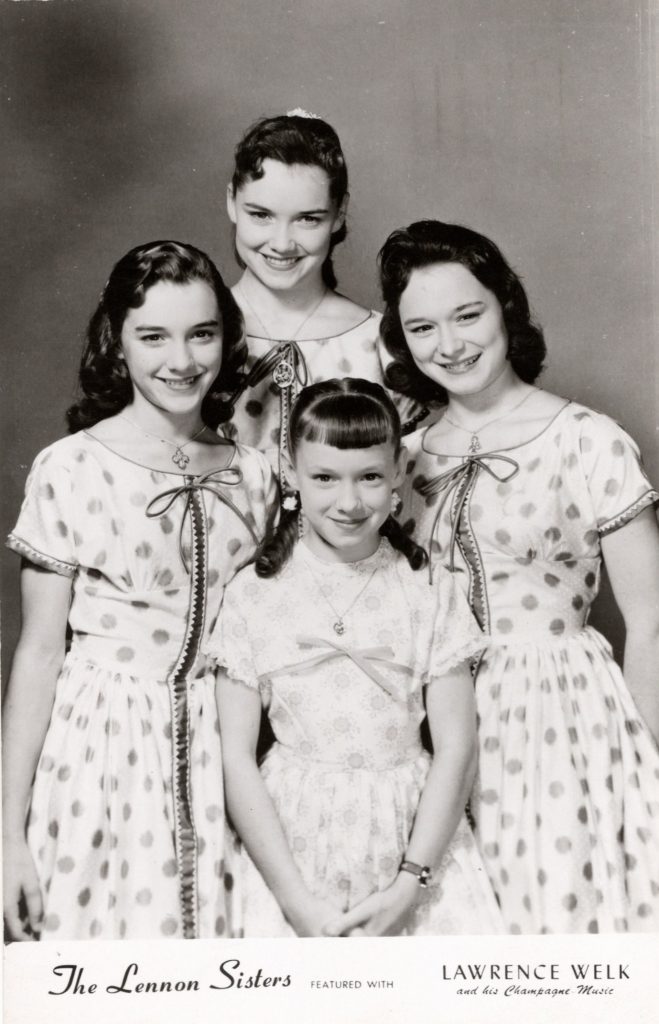 The show can still be found on the air after all these years, but it might be a bit more challenging to find with an endless number of channel options we have today. Now, seeing the show brings back memories from that childhood on the Great Plains. One of my favorites was the Lennon Sisters, for
no doubt, I and many other boys had a crush on one of them. Others might find Jo Ann Castle, and her honky-tonk style piano, had many a toe tapping, and we cannot forget Joe Feeney for his clear tenor voice. If you too watched, who were your favorite entertainers that Lawrence brought to the stage to entertain us?

Duane Stabler is retired from a career in engineering. Like many postcard collectors, Duane is also interested in genealogy and has successfully published in that field of endeavor. In addition he edited the Twin City Postcard Club newsletter for eleven years. Duane and his wife live near Dallas, Texas.
PrevPreviousTwo DelMarVa Sketch Artists and Their Postcards
NextThe British and Their Traditions ”Whose Keys?”Next
7 Comments
Oldest
Newest Most Voted
Inline Feedbacks
View all comments
Bob Kozak

On Saturday nights, my dad would play in a band at restaurants around Cleveland. When my mother went with him to listen, my grandma and aunt would babysit, and my siblings and I always had to sit through Lawrence Welk before the “good shows” came on. The fact the “Champagne Music Makers” were sponsored by Geritol let us kids know we weren’t exactly the target audience.

Yes, I think that’s true for many of us Bob but little did I realize as much as I’ve learned about the man. There are many bits and pieces I know about Mr. Welk that didn’t make the story but this story is intended to give the reader a taste of what collecting these cards is about.

I remember my grandfather, a German immigrant, used to watch the Lawrence Welk show and was very disappointed when the show went off in 1971.

0
Reply
Duane
Reply to  Will

Yes, Lawrence was a first generation American. His parents immigrated in the late 1800s and were farmers but it’s obvious that Lawrence was never going to be a successful farmer. He was a showman but also a very successful businessman. Many people were disappointed but I know the show is still going in reruns in select areas.

At just ten years old, my Dad, Bobby Looney played the trumpet, sang and was a featured guest when Lawrence Welk played live shows in Sioux City, Iowa. This was more or less around 1941. When he wasn’t playing the trumpet he sat on the stage and threw bubble gum out to the audience. Looking for anyone who may remember this.

My dad, Ben Ollenburger, played guitar in some of those barn dances around the Wilton North Dakota area when Lawrence would come to play. Not sure of the year, but it had to be in the 1920’s I assume. It would have been wunnerful to have some photos!

Welk worked doing live broadcasts on radio station WNAX in Yankton, S.D. (not Sioux Falls) for many years and lived in Yankton. It is during that time that he began playing dance halls throughout the Midwest and became famous.