The British and Their Traditions 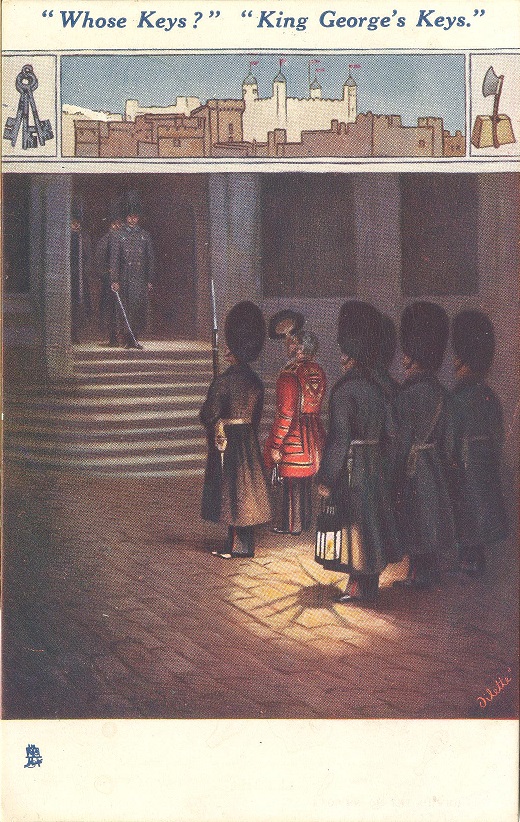 This card is part of a Raphael Tuck set entitled the Yeoman of the Guard #9221.  When you see the others from this unusual nine-card set, each is a depiction of those who serve the Crown at the Tower of London. Included are yeoman portraits as individuals and in groups and chief warders in dress uniform, both in rank during ceremonies and on parade.

There is no other society in the history of mankind that has lived with so much ceremony as the English do. I am no judge of what Americans should take from the English, but the fact remains that much of what we do in the United States and the way we live is based on English Common Law and English tradition.

This card is different from the others; it illustrates the daily Ceremony of the Keys.

Since our nation – as a result of revolution – gained independence from the English crown some 244 years ago, it may be difficult for many Americans to understand the necessity or the compulsion to continue a daily ceremony for nearly 700 years that  concerns, what many of us would consider a simple set of keys.

Performed nightly since the 14th century, at exactly 9:52 PM, it is probably the least known ceremony that takes place at the Tower of London.  At the same exact minute, each day the Chief Yeoman Warder, dressed in his red Tudor Watchcoat, meets a military escort made up of members of the Tower of London Guard. Together, the Chief Yeoman Warder and the Yeoman Warder Watchmen secure the main gate of the Tower.  Upon their return down Water Lane, the party is halted by a sentry and challenged to identify themselves. The ceremony proceeds as follows when the Sentry says,

The Chief Warder replies, “The keys.”

The Sentry asks: “Whose keys?”

Following this, the party makes its way through the Bloody Tower Archway into the fortress, where they halt at the bottom of the Broadwalk Steps.  On the top of the stairs, under the command of their officer, the Tower Guards present arms and the Chief Warder raises his hat, proclaiming:

The Chief then takes the keys to the Queen’s House for safekeeping, while the Last Post is sounded.

As with most ceremonial events in the United Kingdom, it takes a significant outside influence to interrupt the Ceremony of the Keys. The one time that it happened was during the Second World War, when there was an air raid on London, and a number of incendiary bombs fell on the old Victorian guardroom just as the Chief Yeoman Warder and his escorts were coming through the Bloody Tower archway. The shock and the noise of the bombs blew over the entire entourage, including the Chief Warder, knocking them to the ground.  Needless to say, within seconds they stood up, dusted themselves down, and carried on.

The Tower Museum holds a letter from the Officer of the Guard apologizing to King George VI that the ceremony was late.  Alongside in the display is a reply from the King, which says that the officer should not be punished as the delay was due to enemy action.