and a few of his postcards 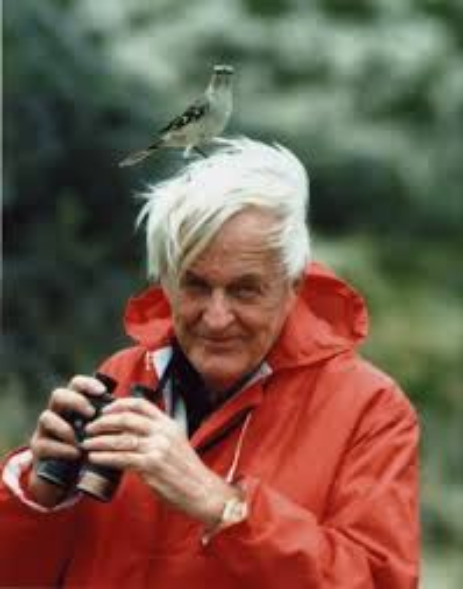 Born in Jamestown, New York, Roger Peterson (1908-1996) was an artist, naturalist, photographer, and educator who devoted his life to his passion for birds.  His revolutionary Peterson Field Guides with their blue buckram covers are as familiar to naturalists as a five dollar bill. He demonstrated to countless readers how to observe and get to know nature. His impact still lives on today in the thousands of nature education programs that are organized around the world each year. Peterson’s influence also lives on in the environmental protection policies within governments around the globe and within many organizations that stem from his advocacy.

For postcard collectors who also see themselves as nature lovers there are many sets of postcards showing Peterson’s art. 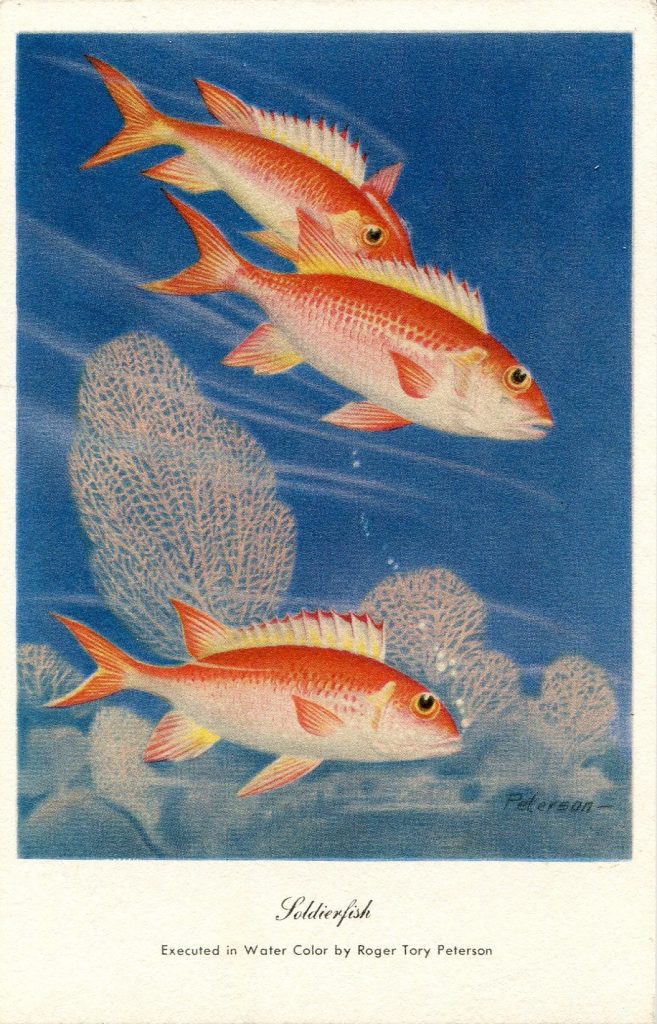 The Sea Life cards were not identified as a set when published by the Barton-Cotton Company in Baltimore, Maryland. They are not numbered, and they are not dated. There are twelve cards – all vertically formatted – with the following titles: Angelfish, Blue Crab and Hermit Crab, Corals and Sea Fan, Flying Fish, Lobsters, Mackerel, Sea Anemone, Sea Horses, Soldier Fish, Star Fish and Sea Urchins, Turtles and Yellowtails. 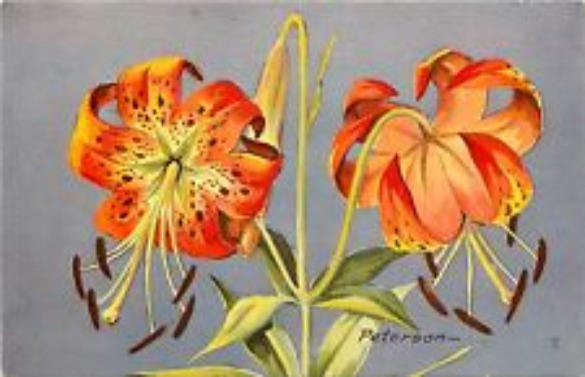 The Peterson Wildflower cards were reproduced by the National Wildlife Federation in Washington, D.C. They are numbered and dated 1957. The images are vivid and colorful and have captions on the address side which include a map where the flowers are most commonly found and describes the growth patterns of the plant. 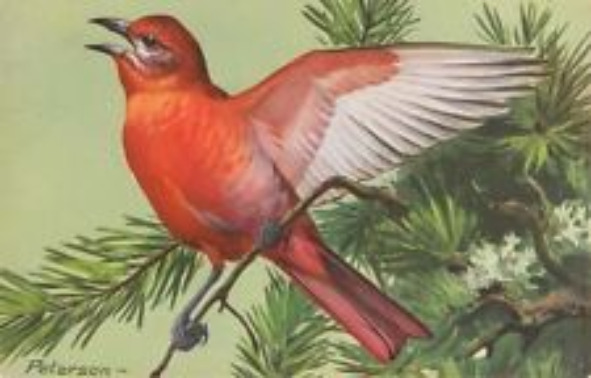 The Songbird cards, also a product of the National Wildlife Federation, are also numbered and dated 1957. The captions on the address side include a map which pinpoints the natural habitat of the bird and a description of the bird’s habits and life patterns.

Currently it is assumed that the Wildlife Federation cards from 1957 are reproductions of earlier sets produced circa 1939.

Below are two examples from Peterson’s Wildflower and Insect series. These are sister cards to the Sea Life cards.  They were published in Baltimore by Barton-Cotton in 1954. 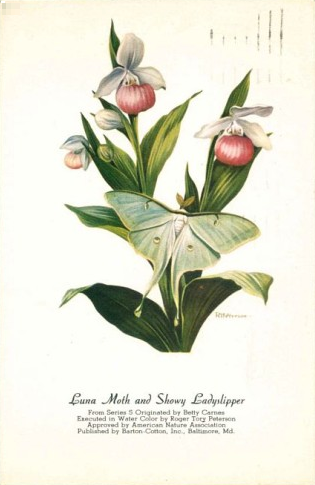 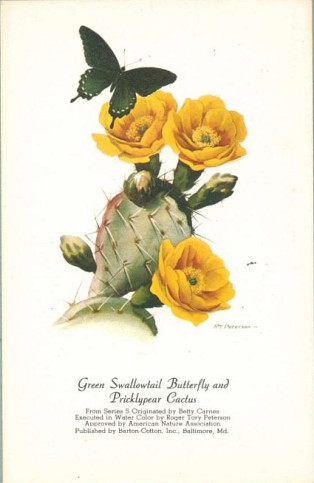 It is quite regrettable that none of the Peterson postcards appear in the standard postcard reference books. The best possible advice is that if your interest in these cards is strong, you should find a fellow collector who can advise you on price and availability.

Editorial Aside:
Shortly after Peterson’s death in 1996, the National Wildlife Federation extended an invitation to Dillon Ripley, who at that time was secretary emeritus of the Smithsonian Institution to write the forward for a new book celebrating Peterson’s art and photography.

He began with a question, “What if there had been no Roger Tory Peterson?” He continued with, “This question brings to mind imponderables such as whether we would all still be struggling to identify birds using unwieldy tomes, or whether birds would have become the best-known animals in the world. Peterson entered a world in which identification and study of birds was the exclusive realm of the specialist with a shotgun, and he transformed us into a world of watchers.

“He transformed us into a world of watchers.” I can’t conceive of a more fitting epitaph to the life of an extraordinary man, who died in his Connecticut home on July 28, a few weeks short of his eighty-eighth birthday.

“Because of Peterson, we became watchers not just of birds, we also became watchers – and more importantly, protectors – of every form of life on our planet. The Peterson guides created a powerful constituency not only for woodpeckers and warblers but butterflies and beetles, treefrogs and turtles, shiners and sea anemones, oaks and orchids.”

The Peterson era began in 1934 with A Field Guide to the Birds, a thin little book no one wanted to publish until the Houghton Mifflin Company gambled on him and printed 2,000 copies. The first edition, which covered birds found east of the Rocky Mountains, sold out in just two weeks and subsequent revisions showing western birds sold nearly ten million copies.

Peterson was never really satisfied with those early editions. More than forty years later when the all-new fourth edition was published in 1980, did he say, “… this is the book for which I want to be remembered.”

Even when he continued to work to satisfy some minor criticisms, I asked him why he didn’t rest on his well-deserved laurels. He said, “Laurels are something you have to defend.” Most of all, Roger Tory Peterson wanted to be appreciated as a fine artist rather than one who drew what he called “decoy” illustrations. Even in the 1970s while he worked on the new eastern field guide, when asked if this edition would be his last, he said, “I hope so, I want to get back to more interpretive painting.” He tried but for Roger Tory Peterson, there just wasn’t enough time.

Ray Hahn is a retired educator, but he has never stopped teaching. His decades of researching, writing and editing a newsletter for the South Jersey Postcard Club has been a world-class education in trivia. In addition to postcard collecting, Ray’s other interests include history, genealogy, and touring the world with his wife Marie. Ray often advises his readers to "Join me as we explore the world one postcard at a time." Ray and Marie live in New Jersey.
PrevPreviousThe House of David
NextAmerica’s Sketch Artists – Part 1 of 6 Henry T. MacNeillNext
2 Comments
Oldest
Newest Most Voted
Inline Feedbacks
View all comments
Bob Kozak

Interesting article that makes me want to seek out views of complete sets of Peterson’s cards.