and His Cyanotype Postcards

This story started as an attempt to address cyanotype postcards. Cyanotypes are quite rare these days. There is no reason that can be stated as a definite except perhaps that collectors have found them and they are now out of circulation. This article will still address cyanotypes but the man behind these pictures is much more interesting. His name is Burton Holmes.

After a quick glance at the pictures and reading the captions, the casual observer would think these two postcards to be European. Indeed, they are in content, but each is very much American, too! The reason this is true is Burton Holmes.

Mr. Holmes was born into a middle-class Chicago family in 1870. He fancied himself an American traveler, photographer and filmmaker and he credited himself for coining the term “travelogue.” 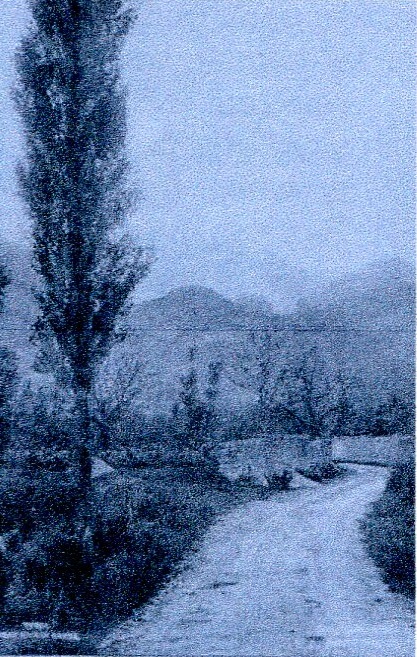 Travel narratives, slide shows, and motion pictures were all in existence before Holmes began his career, but he was a professional traveler and was the first to put all of these elements together into documentary travel lectures.

It began in 1890. When Burton was only twenty years old, his grandmother asked him to accompany her on a trip to Europe. After their return, Holmes showed slides of the trip to the Chicago Camera Club. Holmes wrote of this event: “To take the edge off the silence, to keep the show moving, I wrote an account of my journey and read it, as the slides changed.” 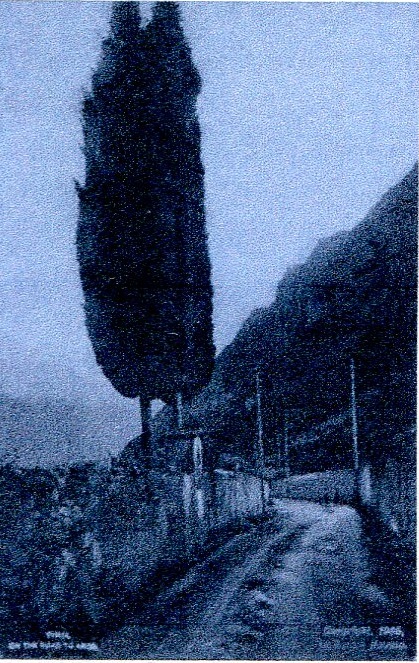 Despite the success of this event, which grossed $350 for the club, it wasn’t until years later that Holmes decided to set himself up as a travel lecturer. In 1893, after sending out 2000 invitations to a select group of Chicagoans, Holmes gave two sold-out talks about a recent trip to Japan.

In the years that followed, Holmes traveled extensively in North and South America, Europe, Russia, India, Ethiopia, and Burma. He lectured on the Panama Canal and the “Frivolities of Paris.” He visited the first modern Olympics in 1896, rode the first trans-Siberian railroad, and shot what may be the first movies ever made of Japan.

In the course of his travels, he crossed the oceans more than fifty times. As Holmes became well known, he employed assistants to shoot film that he made into short travel movies for Paramount and later Metro-Goldwyn-Mayer.

In the first decade of the 20th century celebrities had very little to sell in lobbies after their presentation. Promoters and agents had not yet thought of tee shirts, ball caps, pin back buttons, or CDs. But, there were plenty of postcards.

The cards with this article are good examples of Holmes’s copyrighted images, which he sold after his travelogues. These are scenic views from the Tyrol region in northeastern Italy. However these blue tinted photos were also popular for portrait photography.

The word “cyan” comes from the Greek “kyanos,” a word used to describe the color of water.

Basically, a cyanotype print is commonly known as a blueprint. They are among the most cost affective way of making multiple copies of drawings. The process requires only two chemicals. In 1842 an English chemist, John Herschel discovered the technique and used it to copy celestial maps.

The blue tint of cyanotypes was very popular in the Victorian era, not because of the color but because it was novel. And because a cyanotype print was so inexpensive many more people – not just the rich – could afford to have their pictures taken.

Today, professional artists enjoy using the cyanotype process in their art. One such enthusiast is New York based Kate Cordsen; she is best known for her large format landscapes.

The only sad note concerning cyanotypes is that they fade; drastically! If you have postcards that are faded, here’s a tip. The process has the strange capacity to regenerate itself. It’s easy, but not guaranteed. Remove the card from any protective sleeves. Sandwich the cards between sheets of acid-free card stock (102 lb. stock works best) and store them in an airy, but constantly dark facility. Significant improvements will be noticed in two to three weeks.

The Staff of Postcard History offers this article for your enjoyment. It is a combined effort of many: our publisher, editor, webmaster and collectors/contributors far and wide. Please use the COMMENTS feature below to let us know how we're doing.
PrevPreviousSend In the Clowns
NextAmerica’s Sketch Artists – Part 3 of 6 – Bill KaneNext
4 Comments
Oldest
Newest Most Voted
Inline Feedbacks
View all comments
Dena

I have a few cyanotypes in my collection, but since the cards are in storage I can’t dig them out to see if they’re based on Burton Holmes’s photos.

Thank You for great article. I always wondered about the blue post cards, now I know.

I use the cyanotype process in all my photographic work. It’s a shame Burton Holmes died so long ago. I would’ve liked to have been his drinking buddy!