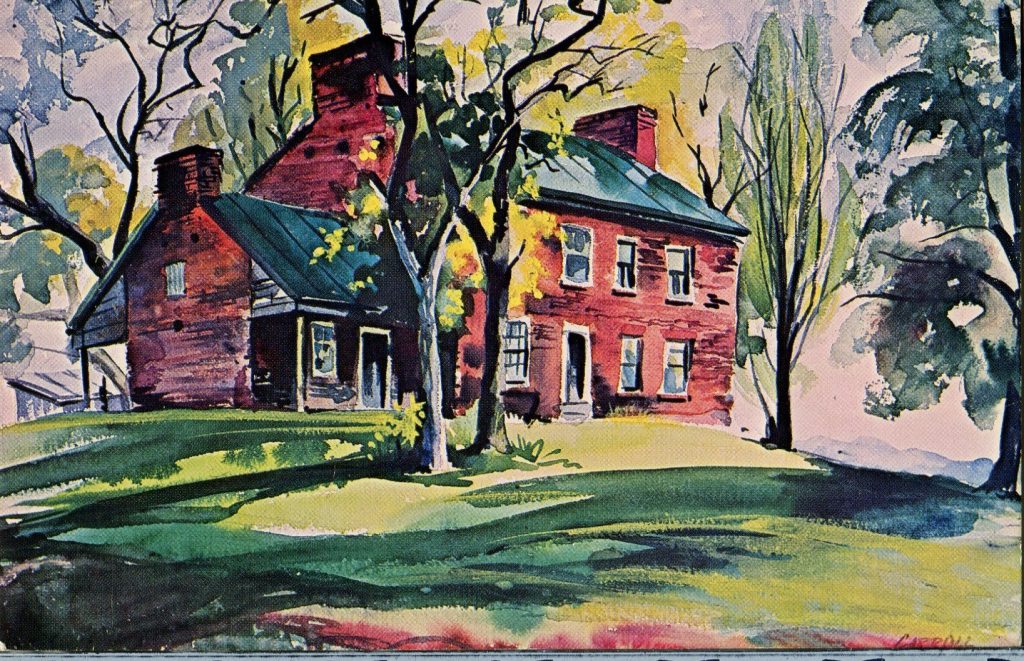 It is highly likely that Moses Broadwell experienced only “one-degree of separation” between himself and General George Washington. It is a fact that when the would-be first president visited Elizabethtown, New Jersey, from the first to the fifth of December 1776, Moses was but a twelve year old boy.

The Broadwell family had come to the American Colonies four generations before, some suggest about 1666. William, the immigrant, chose to settle on four-and-a-half acres of bottom-land on the north bank of the Elizabethtown River in what is now Elizabeth, New Jersey.

The family’s trek westward started with William’s great-grandson Moses. Born in 1764, his farm-style boyhood ended when Moses enlisted to serve as a private with Revolutionary War Colonel Elias Dayton in the New Jersey 3rd Regiment until 1780. Records concerning Moses thereafter are sketchy, but it is known that by 1800 the Broadwells had moved to southeast Ohio.

Later, circa 1819, they moved again, this time to Clayville, Illinois. It was here that John Broadwell (his relationship to Moses is unknown) waited for the rest of the family to arrive. In 1820, Moses Broadwell, his wife Jane, daughter Sarah, and sons William, David, Thomas Jefferson, Charles, and Euclid arrived in the spring or summer of 1820.

In 1824 a United States General Land Office Record #111 in Sangamon County, Illinois, gives and grants to Moses Broadwell and his heirs to have and to hold 153½ acres forever. The document is signed In Testimony Whereof on his behalf by James Monroe, President of the United States, on the fifteenth of April 1824.

The property has a storied history and has been for several decades a private, non-profit historical site just a few miles west of Springfield, Illinois, along State Highway #125. It started as a stagecoach stop and public house and worked as such until 1847 when it was sold. During those years, they catered to stagecoach passengers, freight carriers, cattle drovers, and circuit riders of the legal profession, such as Abraham Lincoln.

Other concerns included a tannery, wood mills, and the establishment of Sangamo Town.

Sometime in the early 1930s, a Dr. Frank Carl Fink (a First Lieutenant in the Medical Corps in service during World War I) acquired the property and shortly thereafter the Broadwell Inn was listed on The Historic American Buildings Registry.

About 1961 Dr. Emmett and Mary Pearson purchased the property from the estate of Frank Fink and began a restoration program that included two log cabins, two large barns, a blacksmith barn, and other outbuildings. In 1972, the Pearsons donated the site to the Sangamon State University Foundation; the university operated the site until 1992. Later that year the property was sold into private ownership.

The image on this card and assuming others in a set dated from 1950 through perhaps 1962 are signed by an artist named Carroll. His (her?) work is very collectible. It is detailed and bright watercolor artistry, but not altogether accurate, i.e., the image on this card is an exact reversal of the presently standing structure in Pleasant Plains, Illinois.