These printers often employed commissioned travelling salesmen. They could appear in town, take some pictures of local scenes, then visit the local druggist or newspaper owner and offer to produce 100, 500, 1,000, or more of the images. Once the sale was made, the pictures were sent back to the home office where they would either be printed or forwarded to Germany, which had a dominant position on finely-printed postcards until a few years before World War I.

The German printers employed talented artists who would draw the images on as many as 16 lithographic stones at their factories (each stone was for a different color). The images were then run through the press, the printed sheets cut apart, and the resulting cards shipped back to the customer. The entire transaction might take a year but “Made in Germany” on the back meant quality.

In the years after the U. S. Civil War, many talented Germans immigrated to the United States and established printing businesses of their own. Stone lithographic technology was not readily available, they adopted a variety of the newer offset-lithographic process.

The story of Curt Teich is emblematic. Teich’s family were printers and several sons emigrated in the 1880s. When Curt arrived in 1895, he was apprenticed to a New York commercial printing shop, but within three years he joined family members in Chicago where he started his own general printing business. He had a tinker’s mindset and sought ways to print his many commercial jobs more efficiently than his competitors.

On a trip back to Germany in 1904, Teich discovered the postcard mania that had swept across Europe. Returning to America, he undertook a selling trip across the country to test the idea of printing postcards. It was such a success that he returned to Chicago ready to become a postcard printer.

Most presses at that time could not print large sheets, but Teich found a New York manufacturer whose machines could print substantially larger sheets in full color. The resulting ability to print large quantities of cards and the quality of the printing gave him a major cost advantage.

Teich of course was not the first to print color picture postcards in America. Other German immigrant printers had come before and after him into the business. The industry was highly competitive, not only domestically but with Germany as well.

President Taft proposed a substantial reduction in tariffs of all sorts, but the result of the Congressional sausage-making machine, the 1909 Payne-Aldrich Tariff, included a major increase in the tariff on printed items. Importers of postcards reacted by rushing to order vast quantities of German cards before the tariff took effect. The glut that materialized soon led to price wars and the dumping of cards onto the market, with predictable results. What was left of the German trade was strangled with the onset of the British blockade of Germany in 1914.

My collection of factories that printed postcards is far from complete. Here are some of the highlights. 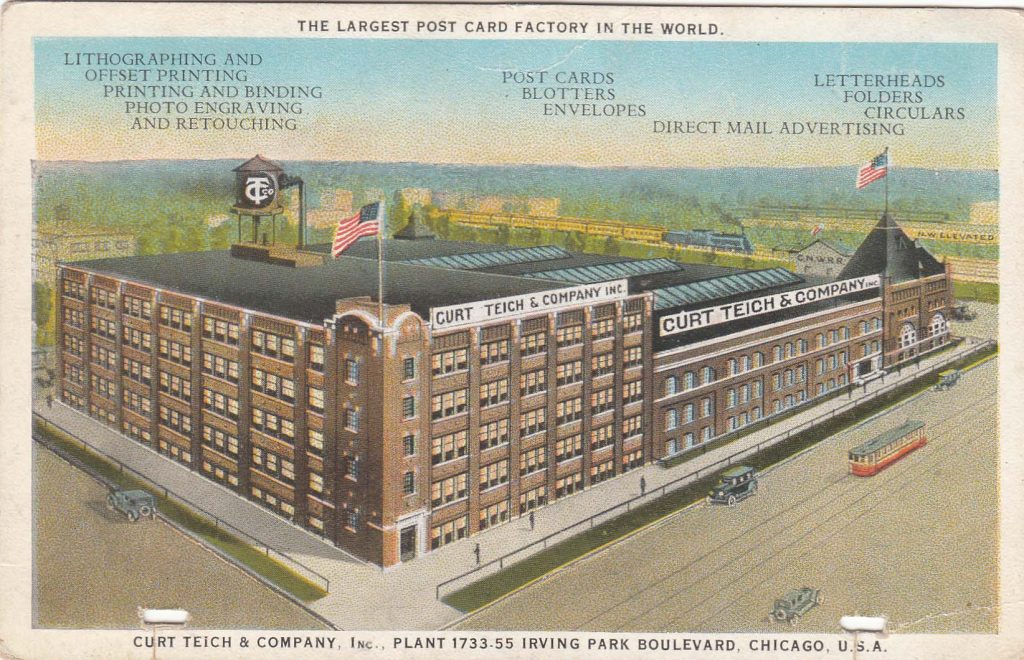 Curt Teich & Company, Chicago, Illinois. The last of Teich’s many factories in Chicago, this building had its own railroad siding. I have seen eight other Teich factory postcards but this is the only one I could afford. The two white spots at the bottom of the card were cut in to allow the library trays holding the card to prevent theft. 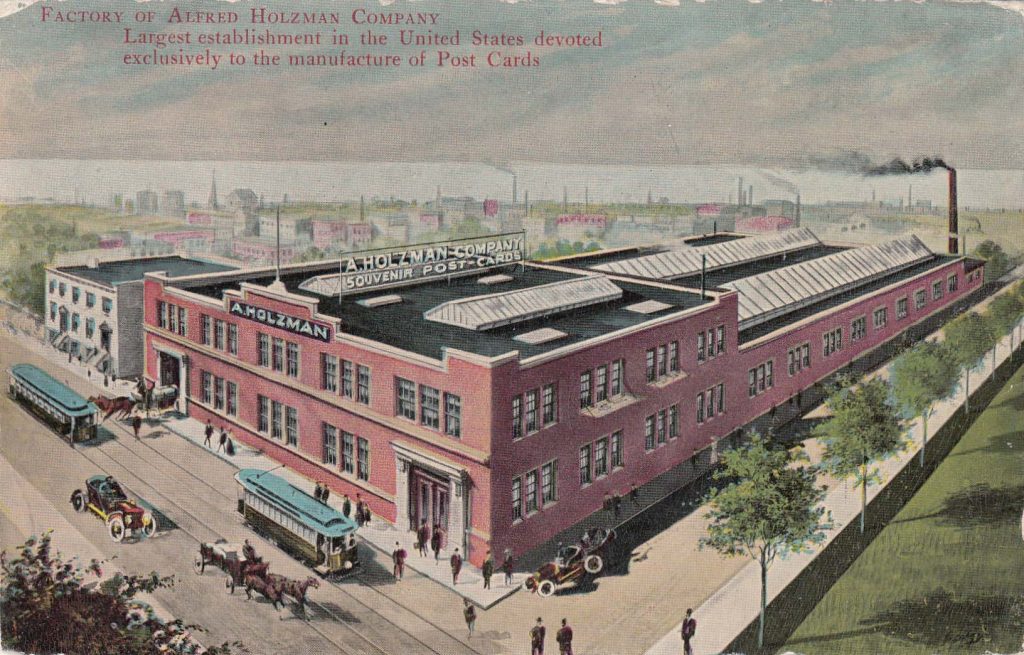 The Alfred Holzman Company, Chicago: Like Teich, Holzman was a German immigrant. In the aftermath of the collapse of the postcard market due to the Payne-Aldrich tariff of 1909, Holzman closed its doors in 1910. 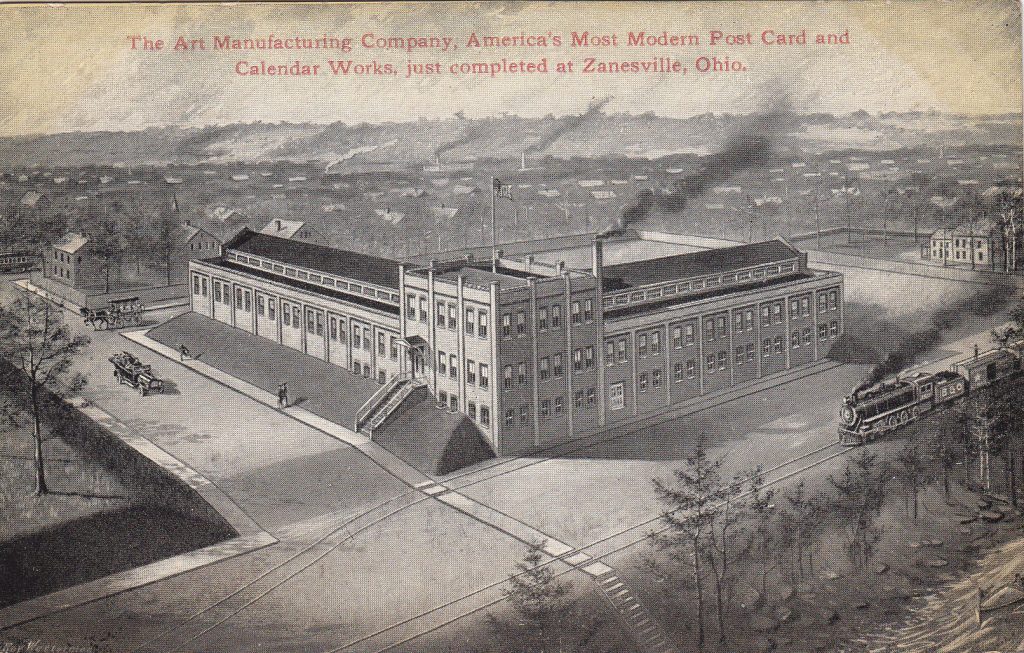 The Art Manufacturing Company, Zanesville, Ohio. Established in 1898, they too went under due to the collapse of the market in 1910-14. This is their biggest (and last) factory. 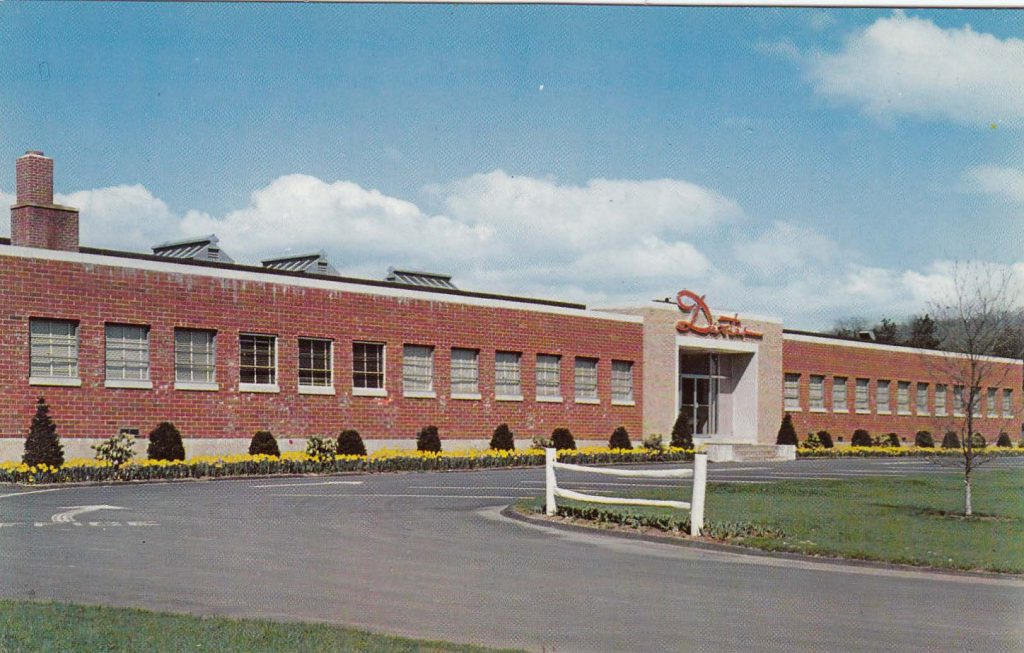 The Dexter Press, West Nyack, New York. Thomas Dexter started his business as a job printer in New Jersey in the 1920s. By the 1930s he was producing cards in several forms in Pearl River, New York, and by the 1950s he was making photochromes in West Nyack. By 1972 they had merged with a larger firm and the company ended its time by 1992 as MWM Dexter. 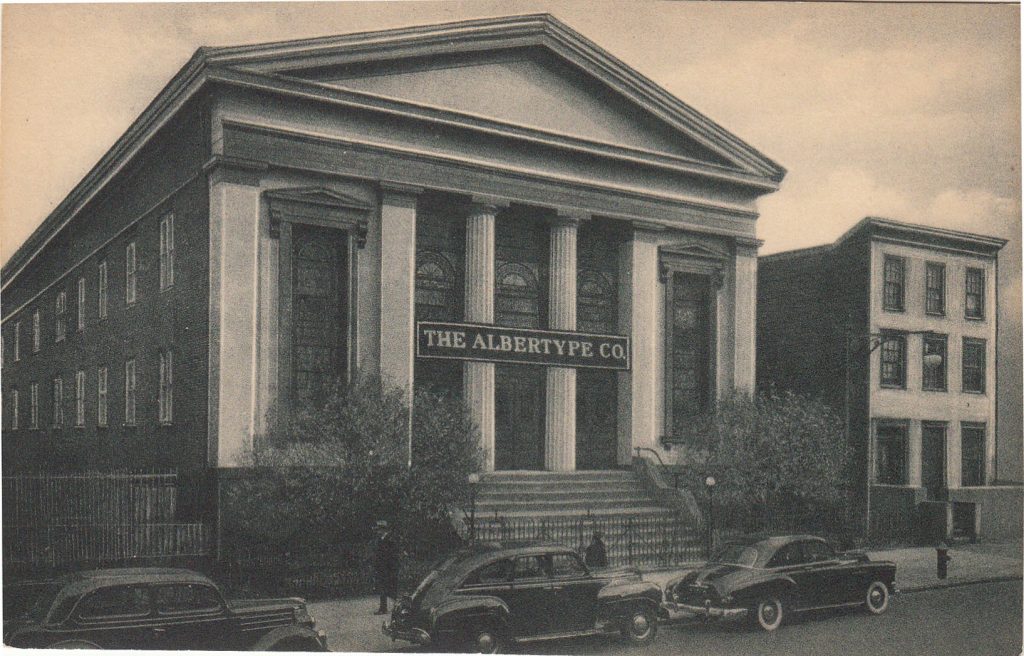 The Albertype Company, Brooklyn, New York. The Wittmann brothers began a printing business just after the Civil War. Their postcard business developed in the 1890s and eventually they purchased this former bank. Their cards were never numbered but priority can be determined because their early cards had “Albertype” in the stamp box while their later cards used the need for a dividing line for their “Postcards of Quality” slogan. 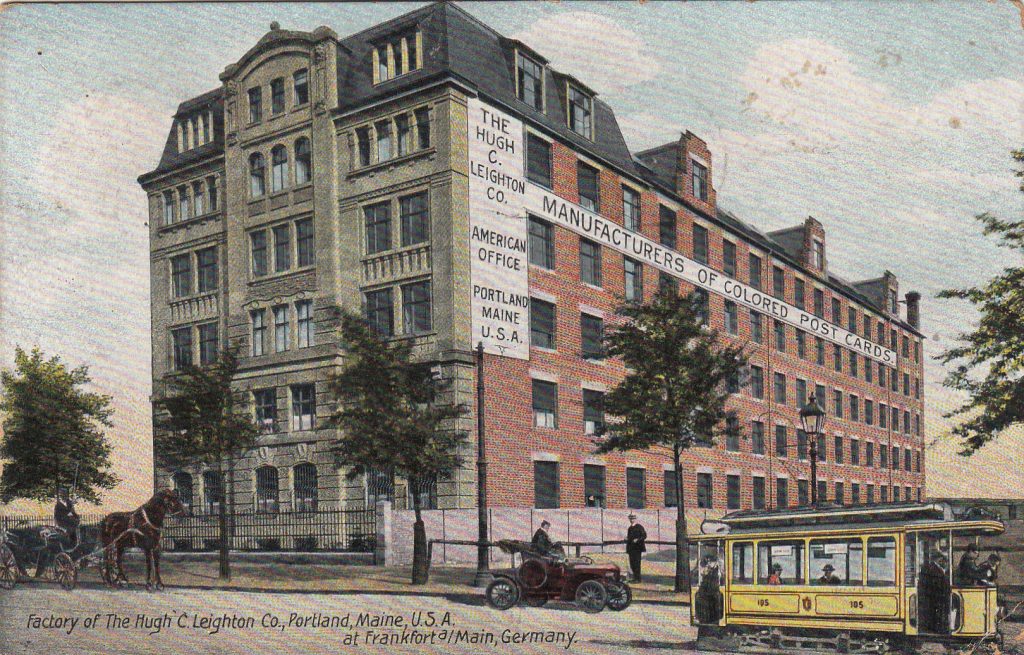 Hugh C. Leighton Company, Portland, Maine. Leighton cards generally note that they are “Printed in Germany” or “Printed in Frankfort o/Main, Germany.” This card shows their German factory. Note the vertical banner on the side of building, which states that the “American Office” is in Portland, Maine U. S. A. Leighton merged with Valentine & Sons in 1909 and the merged company closed in 1914. 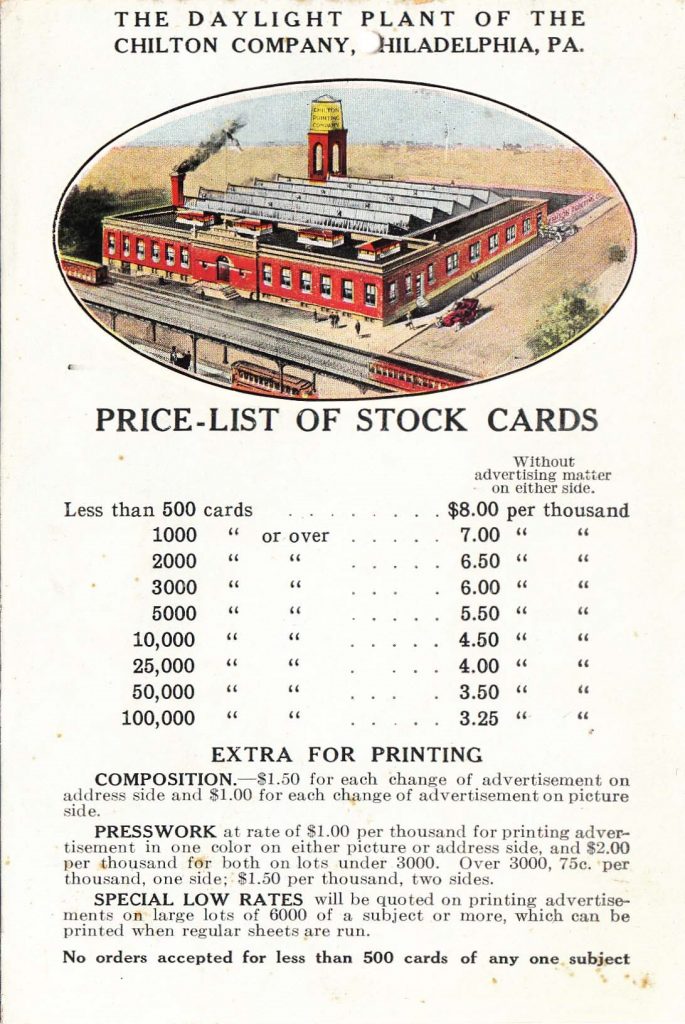 The Chilton Company, Philadelphia, Pennsylvania. My full-size card of this company with the same picture does not mention postcards, but this card shows its involvement in printing them. 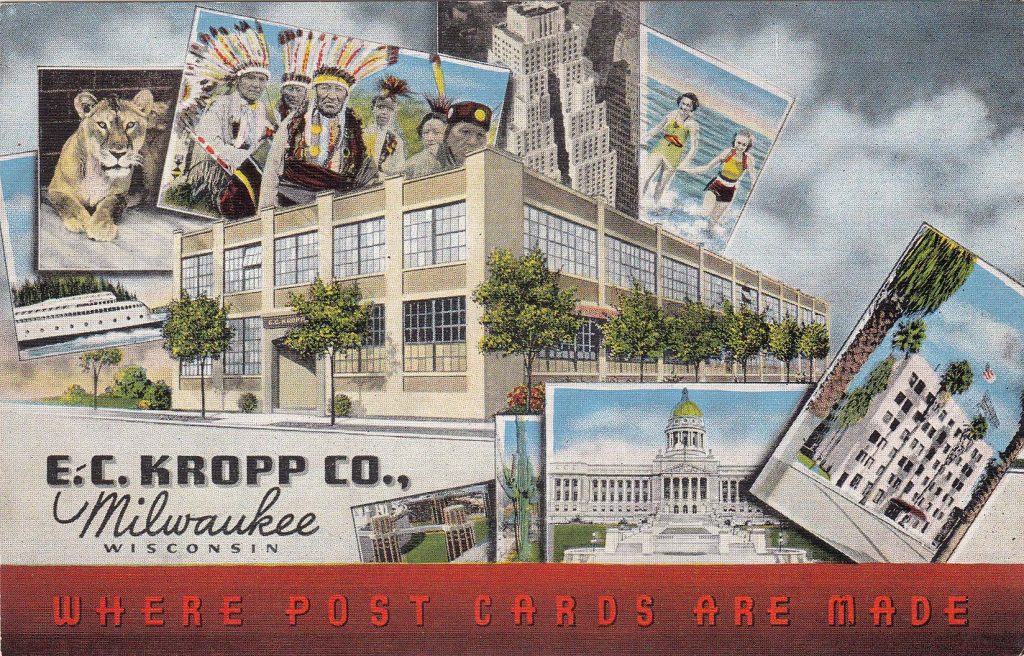 E. C. Kropp, Milwaukee, Wisconsin. Mr. Kropp began printing lithographic cards as early as 1898, moving into a broader range of postcards in 1907 when the company name was altered from “Kropp” to “E. C. Kropp.” Unlike many of its competitors, Kropp’s diversity allowed it to weather the collapse of the postcard market before World War I and it continued in business until merging in 1956.

Bill Burton began collecting Ossining, New York postcards when he lived in that Hudson Valley town. His collection expanded, of course, to include his college, the neighboring towns, and places where he and his wife traveled. In retirement, he's refocused on Delaware and the DelMarVa peninsula towns, but he’s just as likely to be found parked in front of the 25¢ boxes at shows.
PrevPreviousKnow-It-All Quiz No. 1 The Alamo
NextVirginia Beach’s Daniel Boone Historic MonumentNext
18 Comments
Oldest
Newest Most Voted
Inline Feedbacks
View all comments
Thomas Casey

Bill,
This has always been an interesting topic. You have made it both fun and factual. I have always wondered about the where and description of the factories of some of my favorites. I have to start looking for some of the factory postcards to enhance my collection. Thank you for adding this wonderful research and articles to Postcard history

Thanks, Tom. Sometimes the factories don’t identify as such, you have to know who they are. That’s challenging.

I learned a lot about the industry, including the impact of the 1909 tariffs on the industry. Being from Wisconsin I especially liked seeing the history on Kropp and Teich.

I also spend much of my time at shows (pre-virus) by the unsorted discount boxes looking for “treasures”. Maybe you were next to me 🙂

Thanks, Russ. Often there’s a crush at the 25¢ boxes, but it’s fun when you can get there.

Thanks for the interesting article. Chilton did indeed print postcards not only for their popular magazine Automobile Trade Journal but also for auto dealers and manufacturers. Not all were numbered and I have 33 different cards advertising their magazine, three with images of the factory. dated from 1906 through 1923, Dexter Press has at least one other cards from the 1950’s showing the outside of their building with two delivery vehicles.

Gordie, I didn’t put all the cards I have in the article. I used to live near Dexter’s plant and have the card (not uncommon) of Mr. Dexter himself.Do you have the price list calendar for 1956?

I truly enjoyed this article about postcard makers here in USA and these exterior views of their printing plants is wonderful. I have seen several, but some here I have not seen before. Very exciting. All of the supportive text is helpful and information…thank you very much for all of this.

Hal, coming from you that’s high praise. There are others who look for these cards, but we’re a rather small group.Do you have any non-USA cards of the factories? I’ve attached my card of Rotograph — not the factory but one of the most beautiful and detailed cards I have. 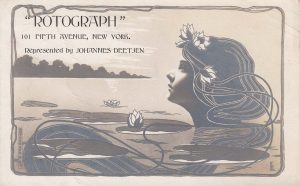 Thanks for the great article, Bill. I learned so much by reading and enjoyed the great images of postcard printing companies I have heard of but have never seen!

These factories made postcard collecting what it was in the Golden Age and their legacy today is the quality of their printing.

Most of these printer names were familiar, but even though I spent most of my life in Ohio, I don’t recall ever seeing a card from the Art Manufacturing Company.

Which Dexter postcard is earlier—one with a West Nyack address or one with a Madison Avenue address? Thanks!

Jeff, Thomas Dexter was my grandfather. My mother, Barbara Louise Dexter Cooke Schwartz, says the Madison Avenue address was their sales office. It might have been a commercial card for a local business. Most cards had the West Nyack address.

Bill, my grandfather was Thomas Dexter. We used to visit him and my Grandma Mildred Dexter in Pearl River every Christmas and Easter. He would take us over to the plant in West Nyack and show us around. Our favorite stop was always the cutting area, where one of the cutters would show us his hand where he cut the tip of his finger off. In those days, he was printing on two-color presses, and there would be huge pallets of half-printed postcards waiting for their second run to complete them.

I really liked the E. C. Kropp Co. card. They were always a close competitor to the Curt Teich Company.

Joyce Hall, the founder of Hallmark Greeting Cards, started as a postcard published.

Are some old postcards worth money?

Cher, what makes a card valuable is such a broad topic that it’s tough to answer. In general, it’s a personal thing. I have paid good money for some of these cards but one was a dollar. I find less interest in the price and more interested in the attractiveness of the image and the subject.