Our hobby often takes us on different paths that always lead to discovering something new. Over time, a friend passed along to me several envelopes containing an assortment of postcards she didn’t want. Mostly the cards were Kodachromes of Virginia Beach and historic Williamsburg.

Most were interesting and something I would keep, but there was one, a linen “Greetings from Virginia” card which intrigued me. On the back was a check list which looked like it was from the 1950s, maybe earlier. There were eight locations of sites found in Virginia and listed by each letter of VIRGINIA. Cute, but not exactly the tourist spots I would have chosen. One item listed beside the third letter “I” was “Daniel Boone Monument.” 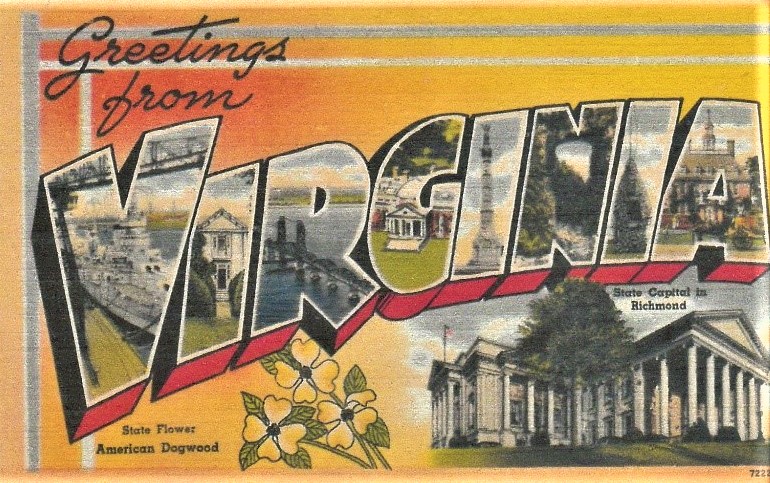 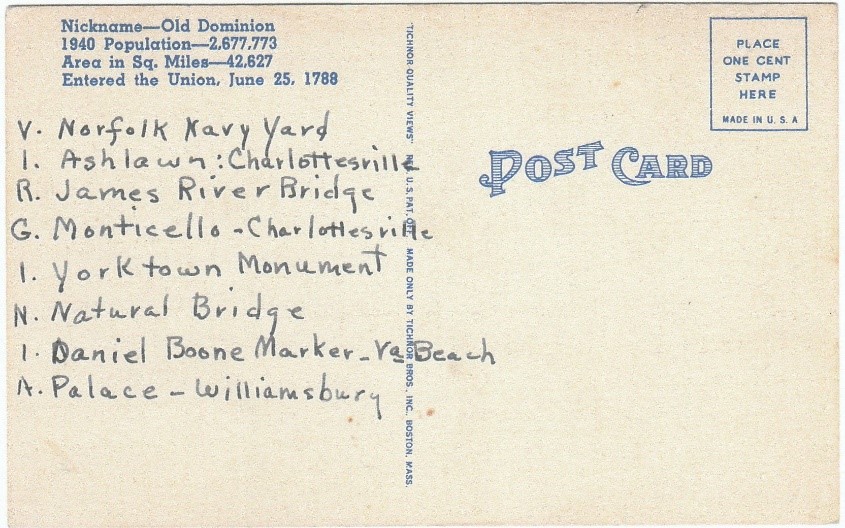 First my research led me to the DAR, the Virginia, Tennessee, and North Carolina chapters of the Daughters of the American Revolution. Mrs. Lindsey Patterson, of Winston-Salem North Carolina, took the lead and probably did most of the work in documenting Daniel Boone’s trail from Tennessee through the Cumberland Gap to Kentucky. She did a marvelous job at investigating the history of the trail on which 300,000 settlers traveled to Kentucky. Subsequently the 24,000-acre Cumberland Gap National Park at the southeastern corner of Kentucky and the western tip of Virginia was dedicated. Between 1912 and 1915, fifty historical markers were placed across the 400 miles from North Carolina to Kentucky to mark the trail that Daniel Boone established in 1769. The four states of Tennessee, Virginia, Kentucky and North Carolina each contributed $100 to provide a monument dedicated to Daniel Boone at the Cumberland Gap.

But that didn’t answer my question as to why there was a monument located at the Virginia Beach oceanfront. 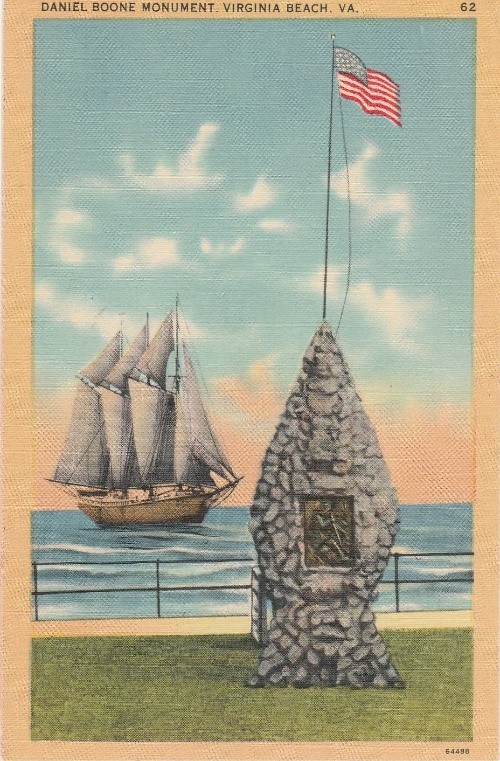 I found that a second effort was made between 1913 and 1938 by Joseph Hampton Rich, a resident of Mocksville, North Carolina who took it upon himself to keep the memory of Daniel Boone alive.  At this point, I had a thought. While the memory of Daniel Boone was alive and vivid for those living  in 1915 on the grounds where Daniel Boone had trod not so long ago, his memory was something we baby boomers also grew up with, mostly by seeing Fess Parker as Daniel Boone on television (not to be confused with his earlier portrayal of Davy Crocket wearing a coonskin cap. Daniel was known to favor a black felt hat). But now, I reflect that this was not a memory that my boys had growing up. Alas, today there is absolutely no hope that my grandkids will give up their play stations to learn about Daniel Boone.

But Mr. Rich had a vision and carried it through. His mission was to raise awareness and commemorate the exploits of Daniel Boone. Initially, there may have been an attempt to place markers at places Daniel may have visited, but it soon evolved into placing markers wherever he could collect donations to erect a monument. I have not located a definitive history locating each monument, but that will be my next chore. One report indicated there were 358 markers. Newspaper accounts indicate that there may have been as many as 400 markers. The markers were located between Virginia Beach and San Francisco, linking the Atlantic and Pacific oceans. 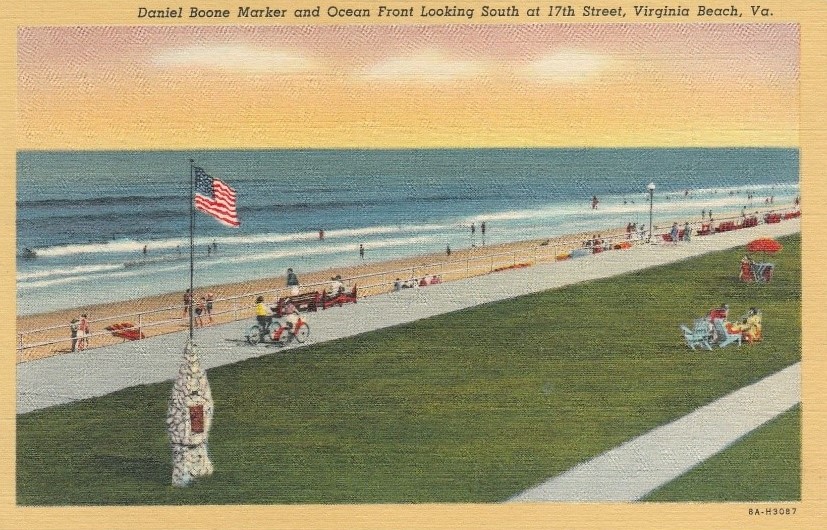 My wife’s family resides in Kingsport, Tennessee and history shows that Daniel Boone spent time there prior to heading for Kentucky. Also that several markers are located in the area. That will be a good place to start my search for an actual marker.

I’ll be going to the Virginia Beach central library to see if they can shed some light on the marker that was once located at the oceanfront or any of the other markers that were placed in a haphazard manner, principally near schools, government buildings or along highways, wherever Mr. Rich could get donations. Many monuments have since been lost with no record of what happened to them.

It is reported that there may be as many as 60 markers still in existence. An interesting side note is that the tablets were purported to contain metal salvaged from the battleship USS Maine which sank in Havana harbor from a massive explosion of unknown origin in 1898. Whether true or not, it makes for an interesting story.

Enjoyed reading this article. So well researched and written.

Since I attended college in the Hampton Roads area, I was interested to learn about the monument in Virginia Beach.

Very interesting. Like the original Norwegian Lady Statue that once stood at the Virginia Beach oceanfront, the Daniel Boone memorial has gone missing.