Our first quiz tests your research skills by asking questions about five postcards commemorating the Battle of the Alamo.

After a 13-day siege, that began on February 23, 1836, the Mexican Federal forces under the leadership of General Santa Anna won the battle on March 6, reclaiming the Alamo Mission, located in present day San Antonio, Texas.

The vicious murders of all the Texans and other settlers at the Alamo at the time encouraged hundreds to join the Texan Army. Many were spurred on by seeking revenge for the killings.

The Texans got their revenge forty-six days later, on April 21 at the Battle of San Jacinto.

Postcards of the Alamo are plentiful. Some date back to before the turn of the 20th century (undivided backs), some are pioneer images, some are white-border cards, many are linens, and more are chromes. Somewhere, probably today, someone is still making Alamo postcards.

Nevertheless, there are a few rare Alamo cards such as these 5 cards. They come from a set printed by Curt Teich.

Fill in the form below with your name, email address, and your answers to the quiz, then hit the red “Send” button. If you’ve answered all five questions correctly, your name will be listed on front page of Postcard History’s website as a “Know-It-All Alamo Postcard Historian” the day our second quiz is posted.

Solve three quizzes in a row? We’ll send you a green “Know-It-All Postcard Historian” certificate. Five in a row? You’ll get the gold certificate.

There will be a new quiz every 2 weeks.

Quiz No. 1 – The Defenders of the Alamo will end at midnight (EDT) on Friday, August 14. The names of “Know-It-All Historians” (those who answered all questions correctly) will be published at the top of our next quiz. Quiz No. 2 – Mack Sennett’s Girls will appear in Postcard History’s “In A Few Words” section on Sunday, August 16, 2020.

The Defenders of the Alamo 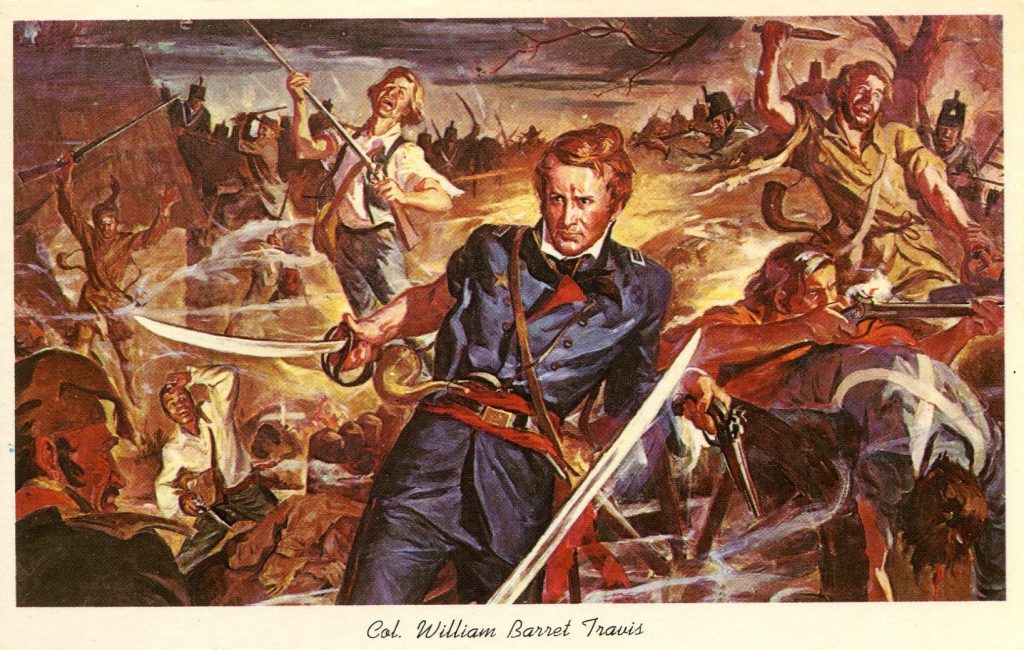 Lieutenant Colonel William Barret Travis was the commanding officer at the Alamo Garrison on the morning of March 6, 1836; the day he was killed in action. Two weeks earlier, the day after Colonel Travis arrived at the Alamo for duty, he wrote a letter to The People of Texas and All Americans in the World, in which he pledged what is due to every soldier’s honor and every soldier’s country.

1. What three words did the Colonel use to express his pledge? 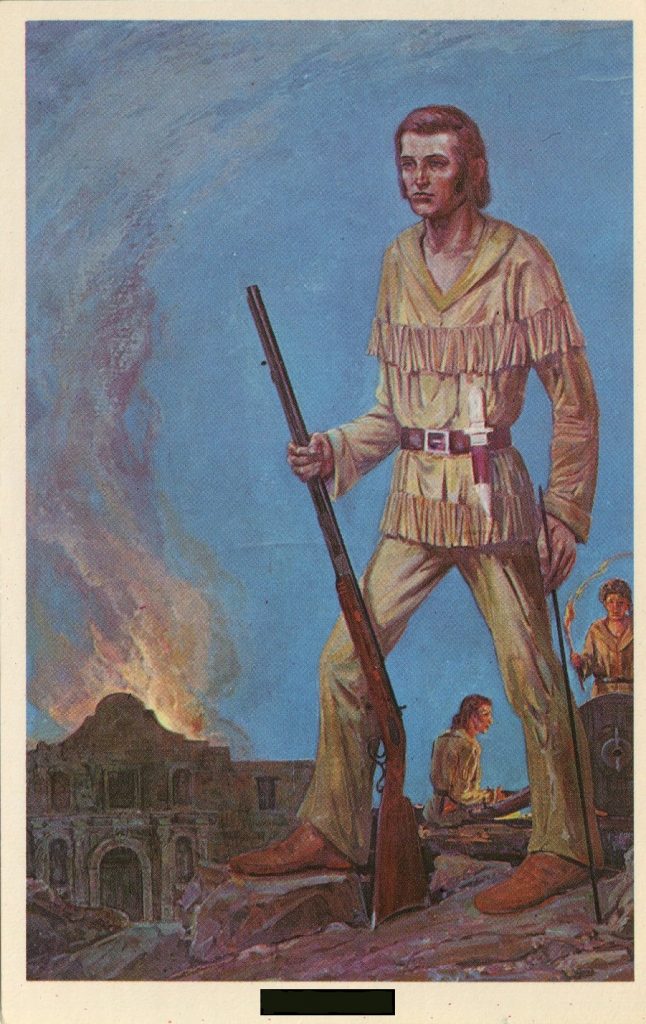 There are many myths and legends about this Alamo defender; some true, mostly not. One true story is the tale of his Battle on the Sandbar, when he and several friends attempted to support two duelers on an island in the river just west of Natchez, Mississippi. He was shot, stabbed, and sustained a sword injury and should have died. When he recovered, he went to Texas.

2. Who was this American man of lore? 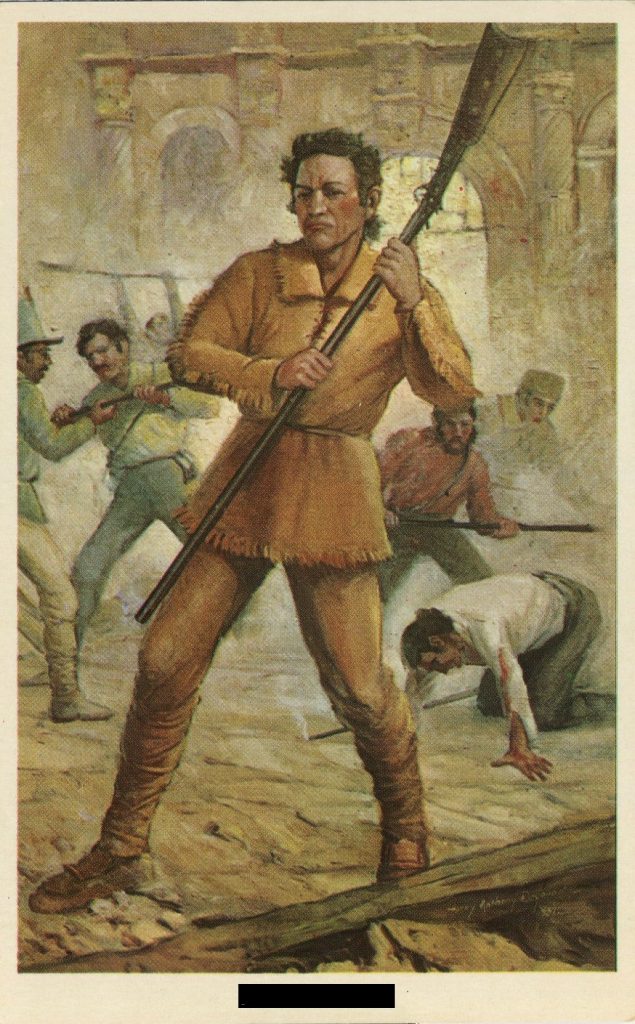 This Alamo defender may have been the original “Accidental Tourist.” He served in the United States Congress, but frequently found himself on the wrong side of popular issues which he considered unfair to common citizens of the time. When he lost his re-election bid in 1833, he angrily told his constituents, “You can go to hell; I’m going to Texas.”

3. Who was this courageous Alamo defender? 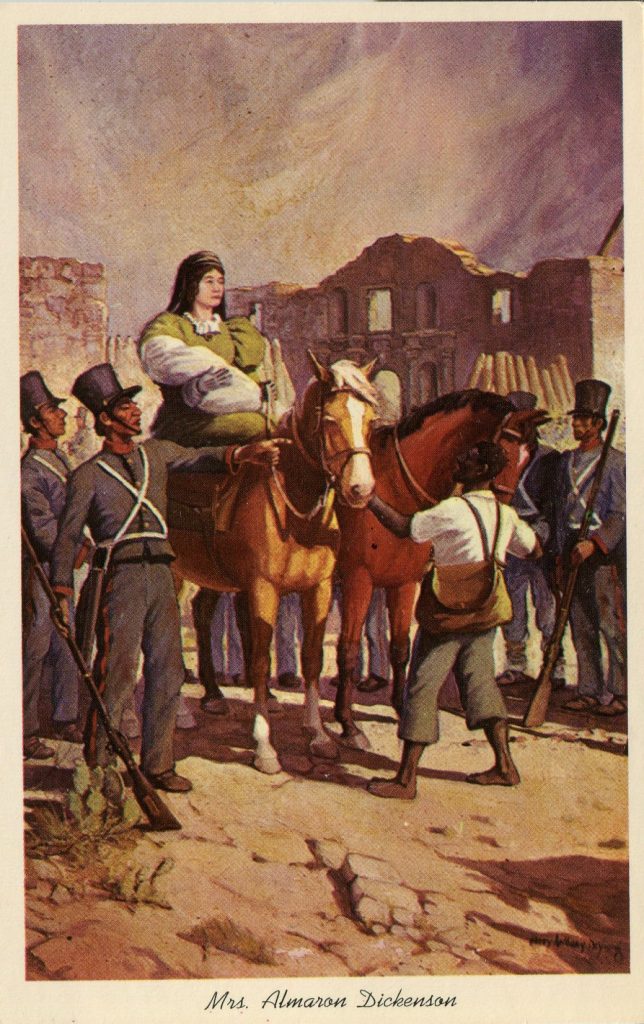 Susanna Dickenson and her daughter Angelina were two of the three non-Mexicans who survived the Battle of the Alamo. Her husband did not. Susanna was illiterate, but her oral accounts of the siege and battle amount to most of what is known about the Alamo and its defenders. Susanna married five more husbands after the Alamo and lived until 1883. Her home in Austin is now a museum.

4. How many movies have been made telling the story of the Alamo? 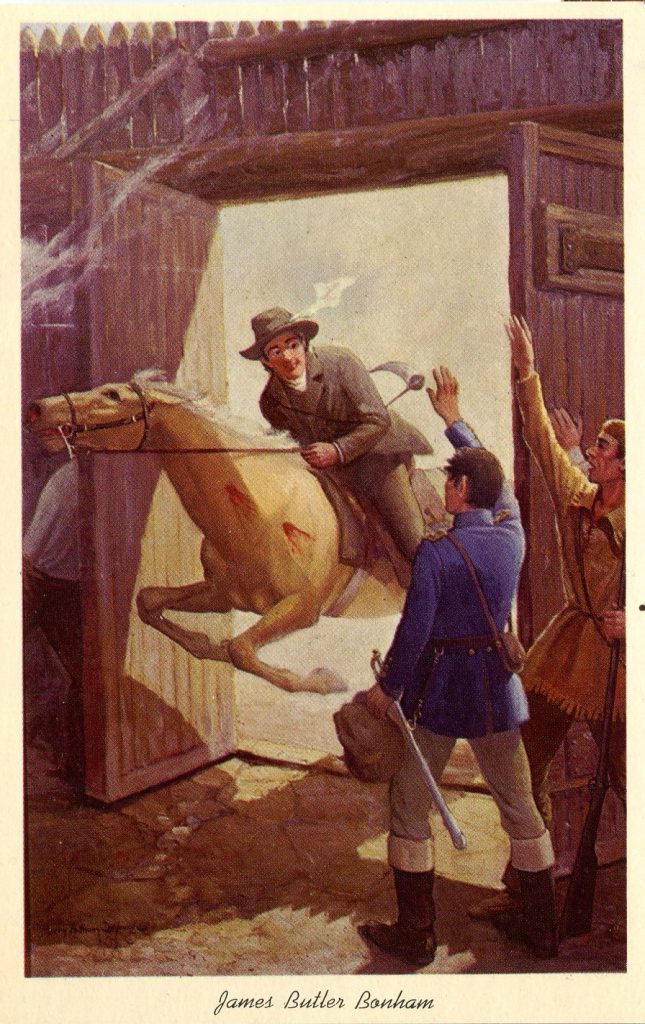 James Bonham also died defending the Alamo; he was 29 and a cousin to Colonel Travis. Young James started his life as a rebel early. He entered a South Carolina college in 1824 and in his senior year he led a student revolt over very stringent attendance rules and the poor food that was given the students in the college boardinghouse. He and his entire class were expelled. The town of Bonham, Texas is named for him.

5. Bonham was not present for the entire 13-days of battle; what was he doing?