To Take the Know-It-All Quiz …

… fill in the form below with your name, email address, and the correct answers to the questions, then click the red “Send” button.

If you answer all questions correctly, your name will be listed on the front page of Postcard History’s website and in the Winner’s Chart above as a “Know-It-All Postcard Historian.”

When you earn five points by answering all questions correctly in any upcoming quiz, Postcard History will present you with a gold “Postcard History Know-It-All” Certificate.

A new quiz will appear every 2 weeks!

The size of an arcade card is identical to a standard postcard, but there are two very distinct differences; an arcade card has a completely blank reverse side (some postcard collectors call this the address-side). The second difference is that an arcade card was designed and manufactured to be sold from a vending machine.

For some reason postcard collectors seem to accumulate a small quantity of arcade cards unknowingly. No one plans it; it just happens. Such is the case with a dozen or so cards I have that I call my “Dangerfield” cards – I pay them no respect.

Nevertheless, if your interests range from actors to zoo animals, often you have no choice. Acrobats and cowboys to film stars and chimpanzees appear most frequently on arcade cards. Such is the case with the Sennett Bathing Beauties.

Sennett Bathing Beauties were all young women, who Mack Sennett dressed in beach clothes and bathing costumes with the principal idea of showing-off their physical attributes to the limit of decency. From early 1915 to about 1928 the Beauties appeared in comedy films and event promotions such as product launches and beauty contests.

The first trio of Sennett’s Beauties, Marie Prevost, Evelyn Lynn, and Cecile Evans was formed in 1915 and literally hundreds followed in the next twelve years. Many remained nameless and a few, namely Gloria Swanson and Mabel Norman tried desperately to divorce themselves from the group, calling them “starter friends.”

In that era, the Sennett Studios, aka, Keystone Studios was generally known as the first step to stardom. Some rather well known men were among Sennett’s cadre of actors, namely W. C. Fields, Charles Chaplin and Bing Crosby. It was the same with all his actors and actresses, Sennett was a low-budget producer, he simply couldn’t pay what the big studios paid, consequently the cast moved on to the bigger and better.

When slapstick and nonsense faded and in-your-face and insult humor came into vogue Mack Sennett was finished. For nearly forty years Mack Sennett made the world laugh. It was a thing of the time. Mack Sennet, the proud owner of a jet-black cat named Pepper became the “King of Comedy.” On March 10, 1954, Ralph Edwards honored Mack Sennett on his television program This Is Your Life. One accomplishment after his retirement was his service on the committees that chose the original 1,558 honorees selected for the Hollywood Walk of Fame. He too in later years received a star. He died in November 1960; he was eighty years old. 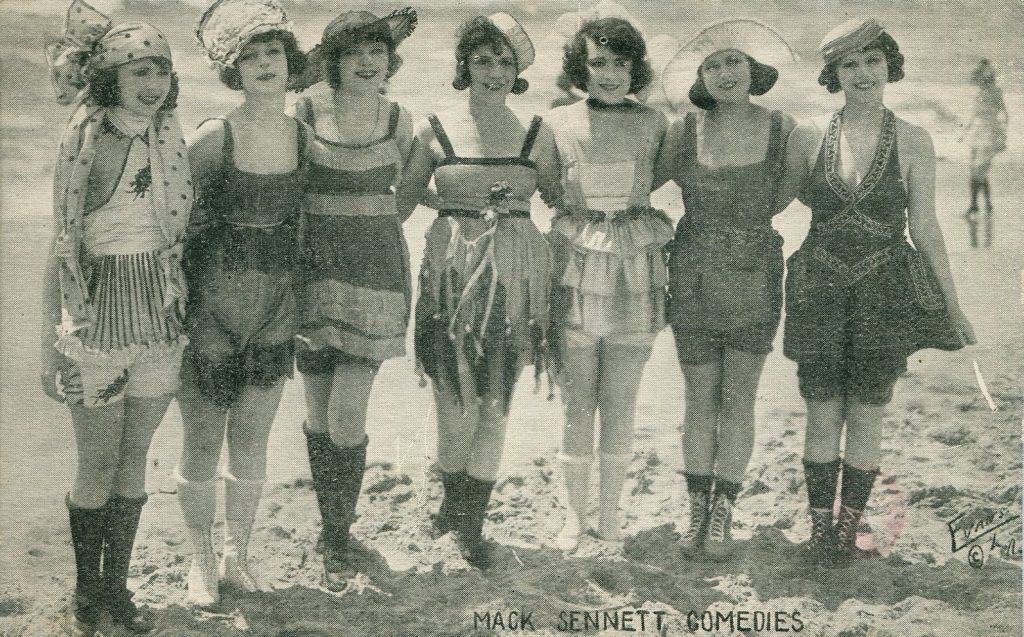 1. By the standards of bathing wear available today (2020), these beach outfits are tame. Nevertheless in 1916 if girls appeared on the beaches of southern California in clothing like this, they would be considered quite risqué.  By wearing such outfits what is it they were showing off that the public would take strong objection to? 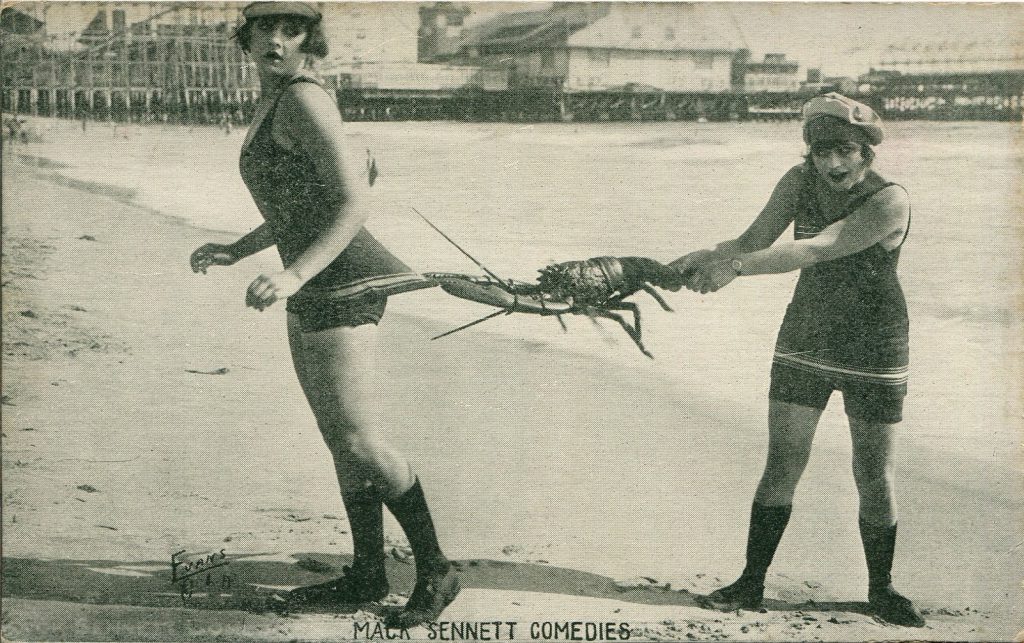 2. Marie Prevost and Cecile Evans were two of the original Sennett Bathing Beauties. In this antic piece, the lobster gets most of the attention because he has hold of a girl’s bathing costume and even though his prey is being rescued by her fellow beach beauty, the lobster is certainly the envy of everyone watching. What other sea creatures appeared in Mack Sennett’s comedies? 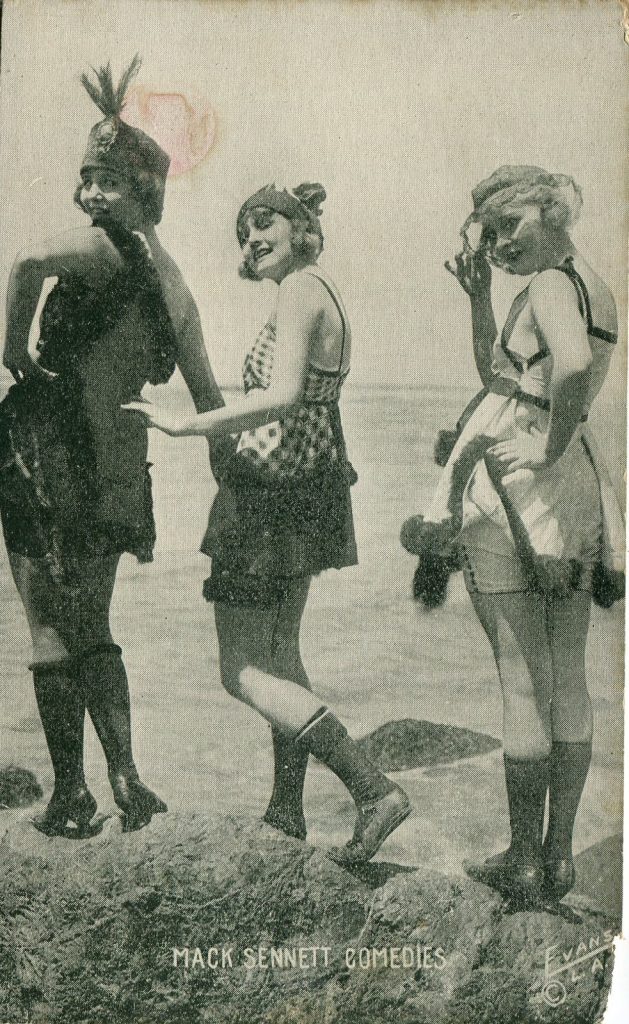 3. On every seashore, riverbank or lakeside beach in the world, the three things that make a vista so agreeable are water, sand and a pretty girl. Mack Sennett recognized that one particular seashore community in California had the perfect beach where he could shoot many of the Bathing Beauty Comedies. What was the name of that California beach? 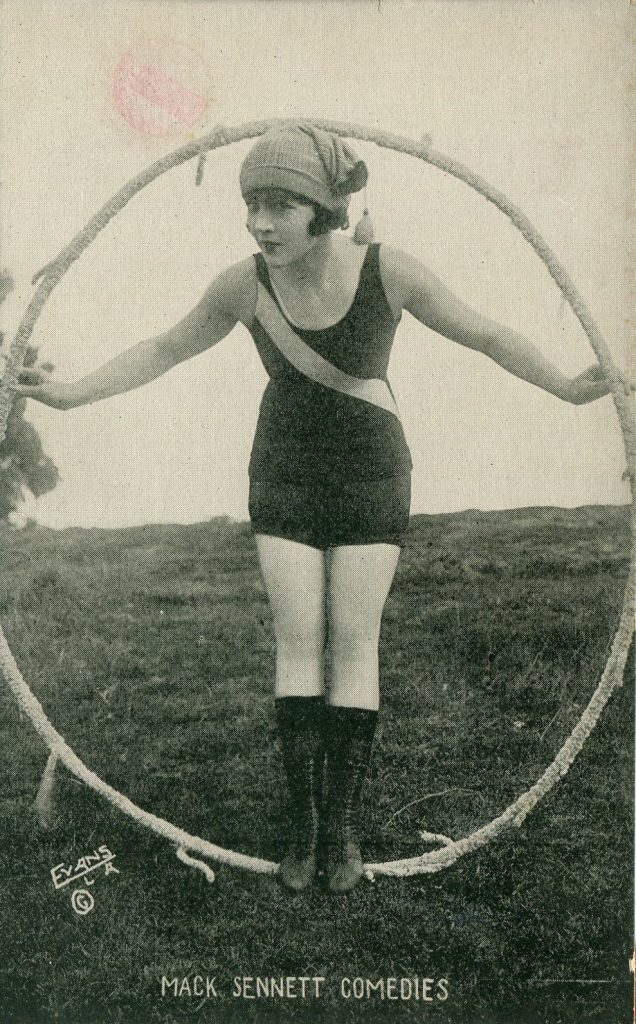 4. No one knows how long beautiful girls have been dancing or doing acrobatics inside hoops, but Mack Sennett capitalized on the idea that pretty girls are easier to watch when they are dancing. Which international performance group has adopted many of Sennett’s antics to entertain their audiences?

Began collecting CA cities in 1982. Bathing beauties also became a topic, about a decade later. Remain active in the pursuit and even with recent four year experience working for a large dealer, have never seen or was aware of the Sennett series. Nice to learn something ‘new.’