The First American
Declaration of Independence 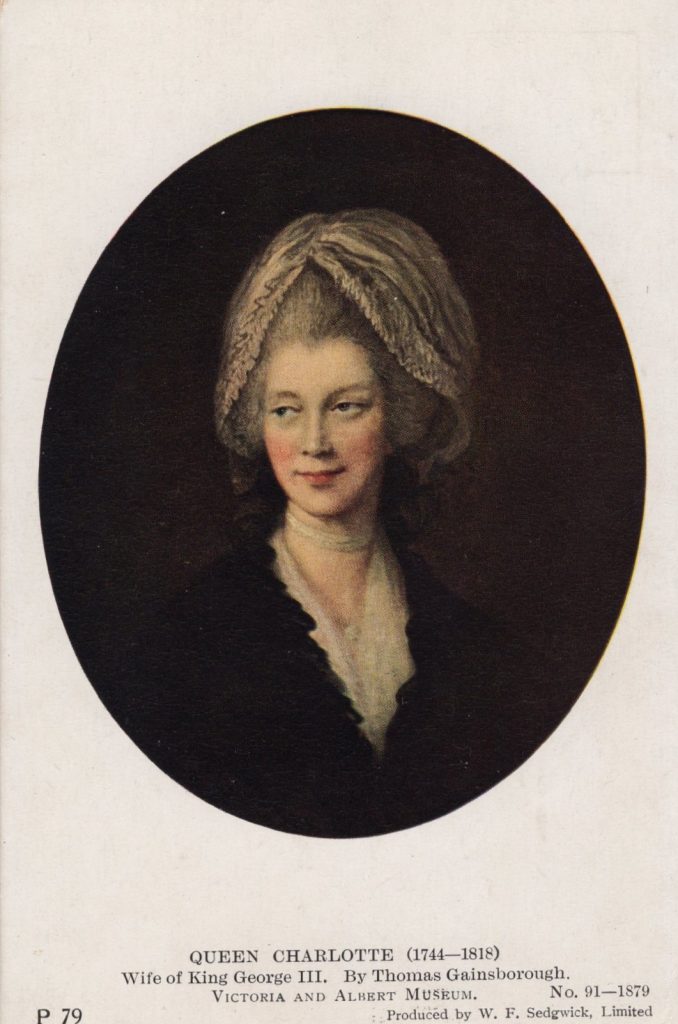 On December 11, 1762, the county of Mecklenburg was formed in North Carolina, to take effect February 1, 1763. In 1766 the first courthouse was built in the town of Charlotte. The town was named for Queen Charlotte (1713-1784), the wife of George III, King of England. Before her marriage, she was Princess Charlotte of Mecklenburg – Strelitz in Germany. Charlotte and Mecklenburg County were named in her honor; obviously, the residents thought highly of the royal family at that time.

Queens College opened in Charlotte in 1771, one of the first institutions of higher learning in the South, but in 1773, Governor Josiah Martin notified the area that King George III had disallowed the Charter for Queens College. This was a major blow for the citizens.

Governor Martin’s difficulties with the provincial assembly were increasing as he sought to dictate the course of provincial legislation. In Mecklenburg, Colonel Thomas Polk acted by sending out notices instructing the citizens to elect two men from each militia district. The delegates were asked to assemble on May 19, 1775.

On that day, virtually every man within a day’s ride was in the courthouse in Charlotte. The delegates elected Abraham Alexander as chairman and John McKnitt Alexander as secretary.  They named a committee to draw up a document for the convention to consider. The committee members were Dr. Ephraim Brevard as clerk, Reverend Hezekiah J. Balch and William Kennon, a Salisbury lawyer. These individuals had met in the past and prepared a document as a tentative draft.

During the day, a courier rode into the village with the news that exactly a month earlier, the British troops had fired on Americans at Lexington in Massachusetts colony. The Mecklenburgers were incensed and declared they were ready to challenge British authority. The delegates sat early into the morning of May 20, 1775 before they formally adopted the declaration brought out by Dr. Brevard. The document consisted of six resolutions. The third of these “Resolved, That we do hereby declare ourselves a free and independent people, are, and of right ought to be, a sovereign and self-governing Association, under the control of no power other than that of our God and the General Government of the Congress.” 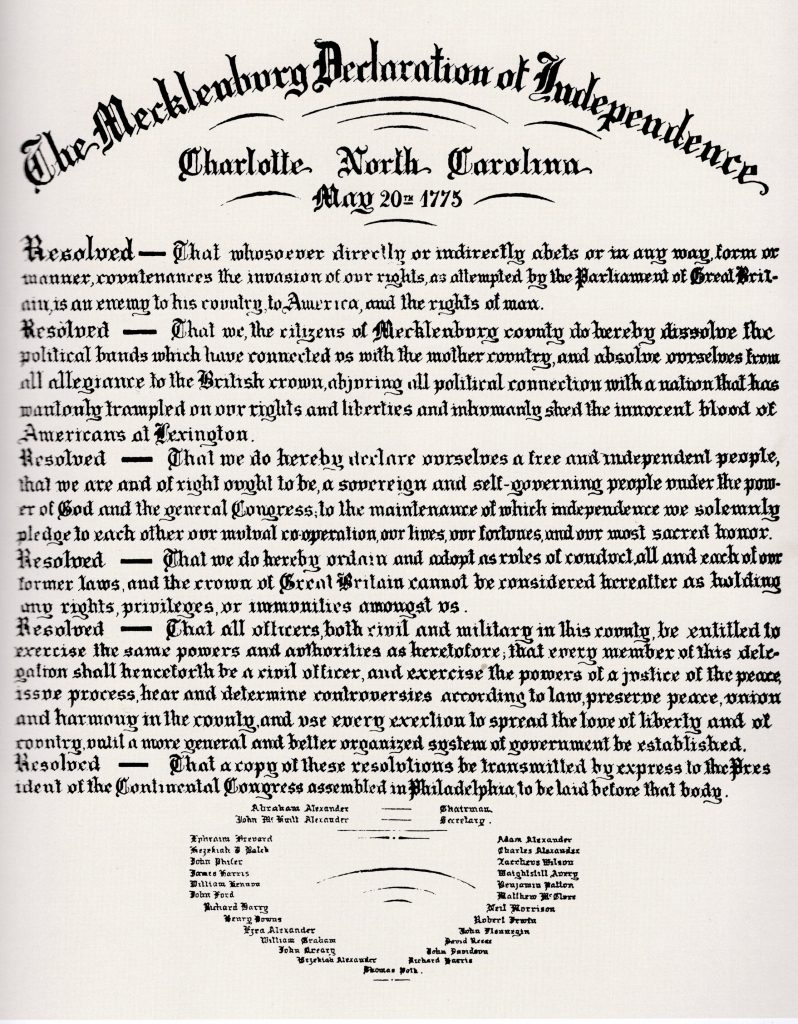 Twenty-seven individuals signed the Mecklenburg Declaration of Independence on May 20, 1775. That was one year and two months before the national declaration was signed in Philadelphia. This document was read from the steps of the Charlotte Courthouse by Colonel Polk at noon on May 20, 1775 to a wildly enthusiastic group of people. On May 31, the delegation met again and drew up what is known as the Mecklenburg Resolves.

In early June, Captain James Jack, son of a local tavern owner, was appointed to carry these two documents to the North Carolina delegation at the Continental Congress then in session at Philadelphia. A big question is, did Thomas Jefferson see them? Jefferson has been accused of plagiarism by some because much of the two documents are similar. Nothing is left today of the original Mecklenburg declaration because in 1800, John McKnitt Alexander’s home burned to the ground, where all the documents from the declaration meeting had been kept. 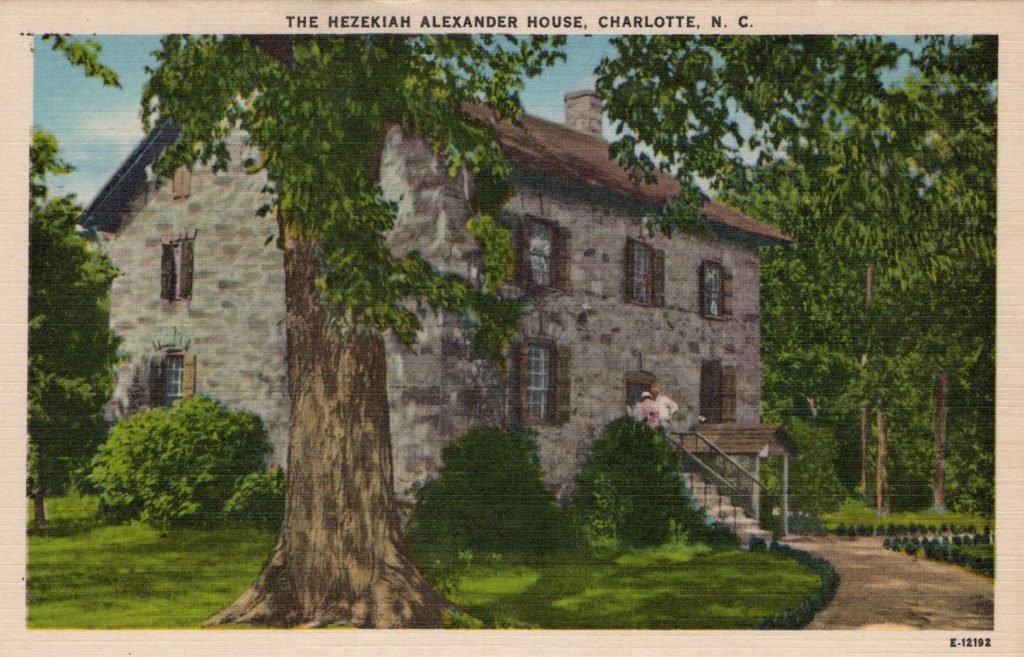 What does remain is the oldest home in Mecklenburg built by Hezekiah Alexander in 1774, a signer of the declaration. The house is built of stone quarried from nearby hillsides. It is now a museum. 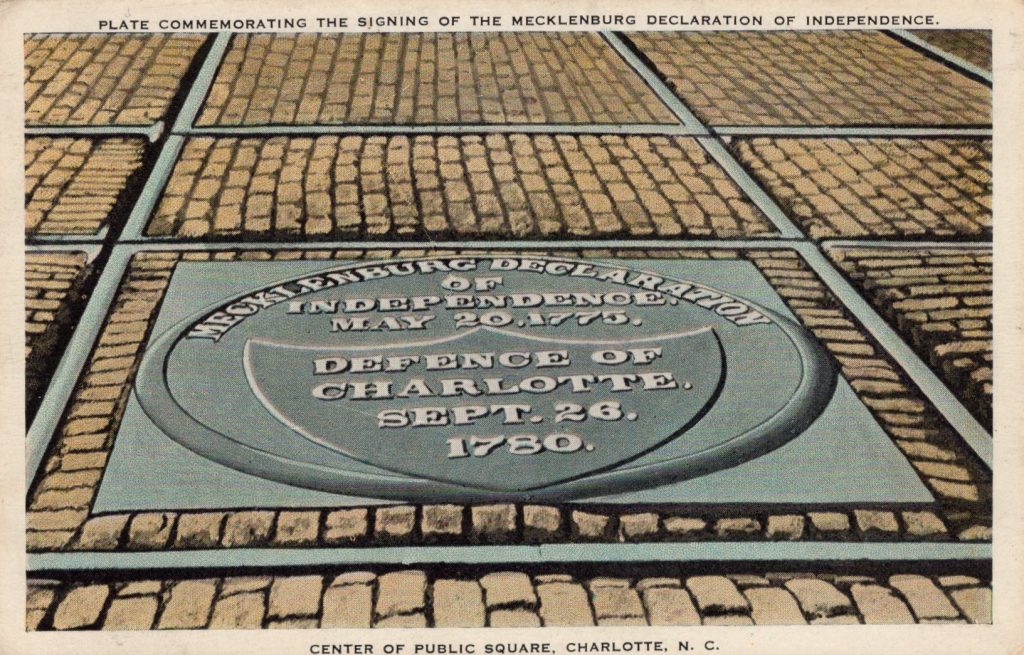 Beginning in 1825, the city began celebrating the signing of the Mecklenburg Declaration. The celebration of 1875 drew more than 30,000 people. In 1909, President Taft, only the third President to visit the city came to celebrate the anniversary. 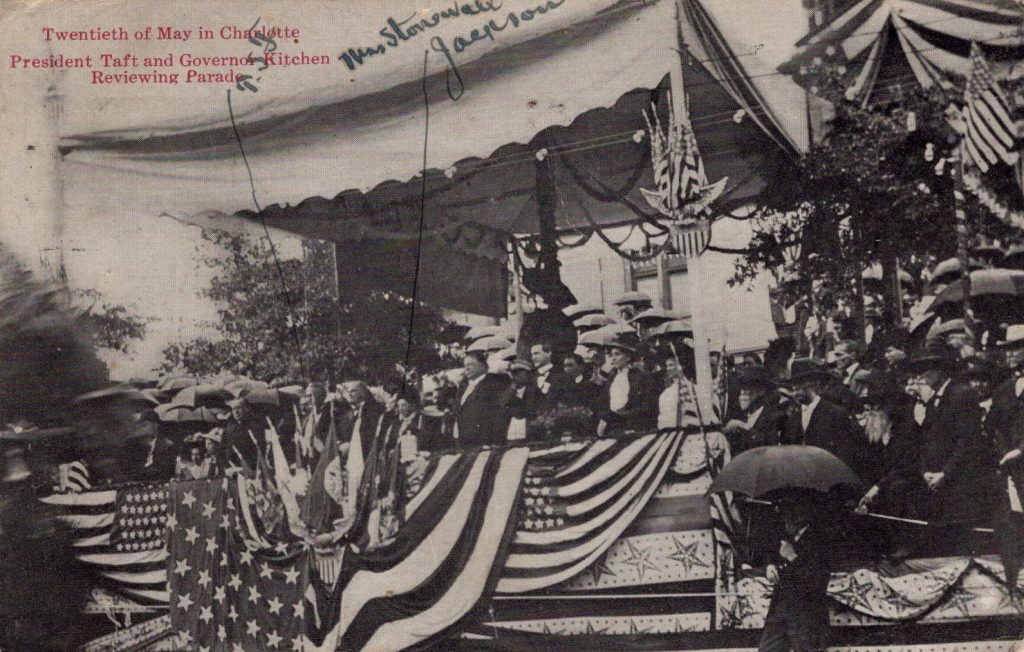 President William H. Taft in 1909 of the review stage at the annual celebration of the Mecklenburg Declaration. 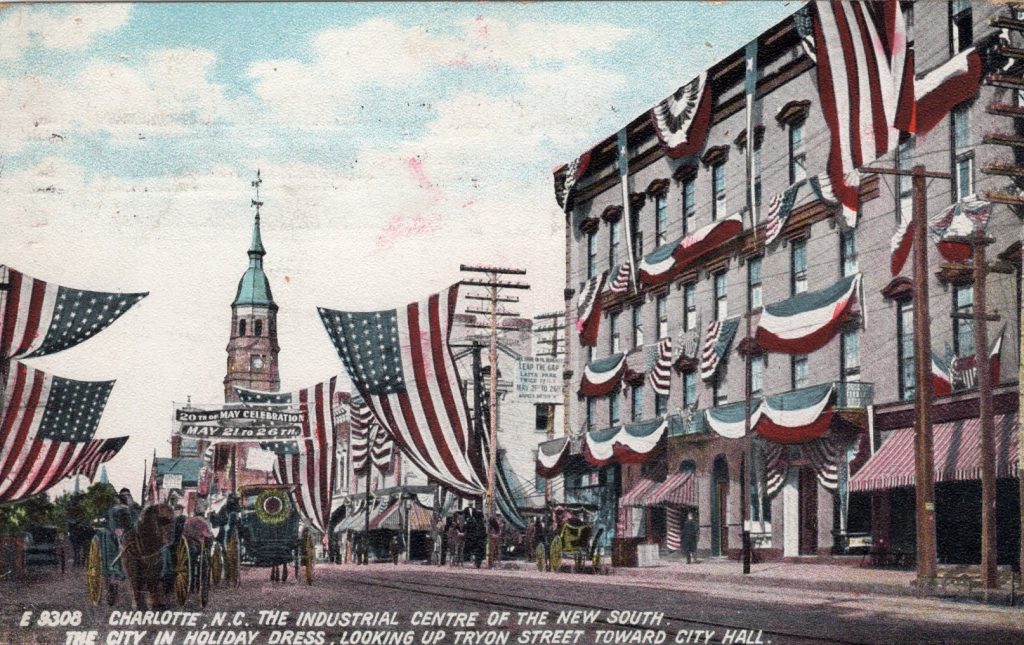 Tryon Street in Charlotte, North Carolina, decorated the annual celebration.
In 1916, President Woodrow Wilson and his wife attended the event. 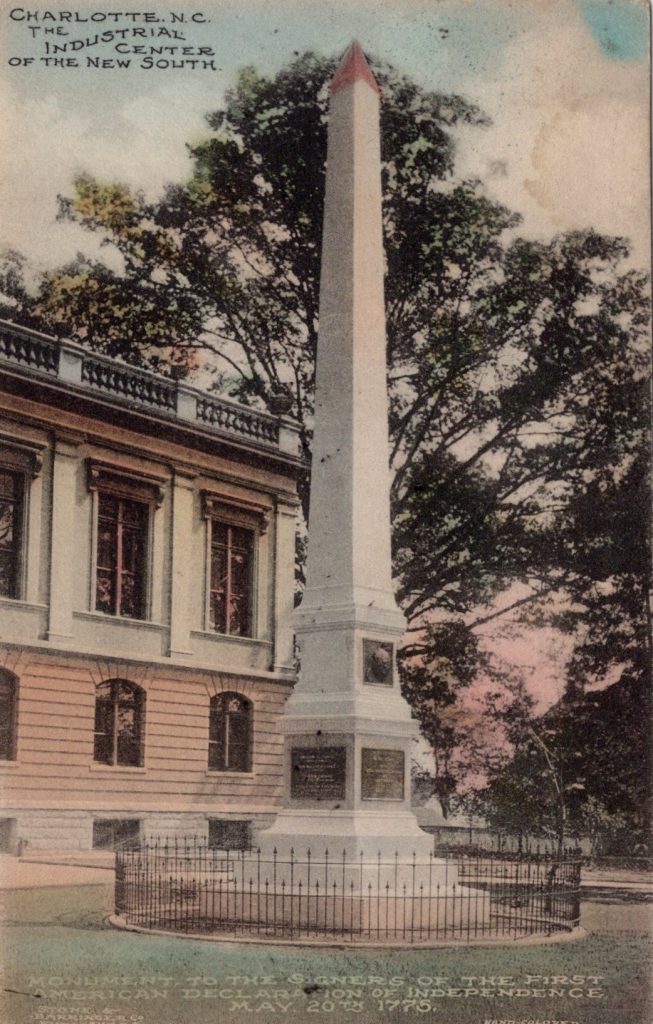 Still standing today though moved to a new location is the monument to the signers of the Mecklenburg Declaration.

Tony Crumbley has been a collector of stamps and postal history since childhood. He has authored numerous articles over his career as a philatelist. He is the current Co-Editor of the North Carolina Postal History Journal, a job he has had for over 25 years. He is a General in the Civil War Philatelic Society where he served as president. He lives with his wife, Renea, in Charlotte, North Carolina, and is the retired Vice President of Research for the Charlotte Chamber of Commerce.
PrevPreviousAmerica’s Sketch Artists – Part 3 of 6 – Bill Kane
NextAmerica’s Sketch Artists – Part 4 of 6 James Francis MurrayNext
2 Comments
Oldest
Newest Most Voted
Inline Feedbacks
View all comments
Shav La Vigne

Great article! I was not aware of any of this history. Thank you for this great lesson.

I knew the term “Mecklenburg Declaration”, but not many of the details contained in this history lesson. Thomas Polk was the great-uncle of President James K. Polk.