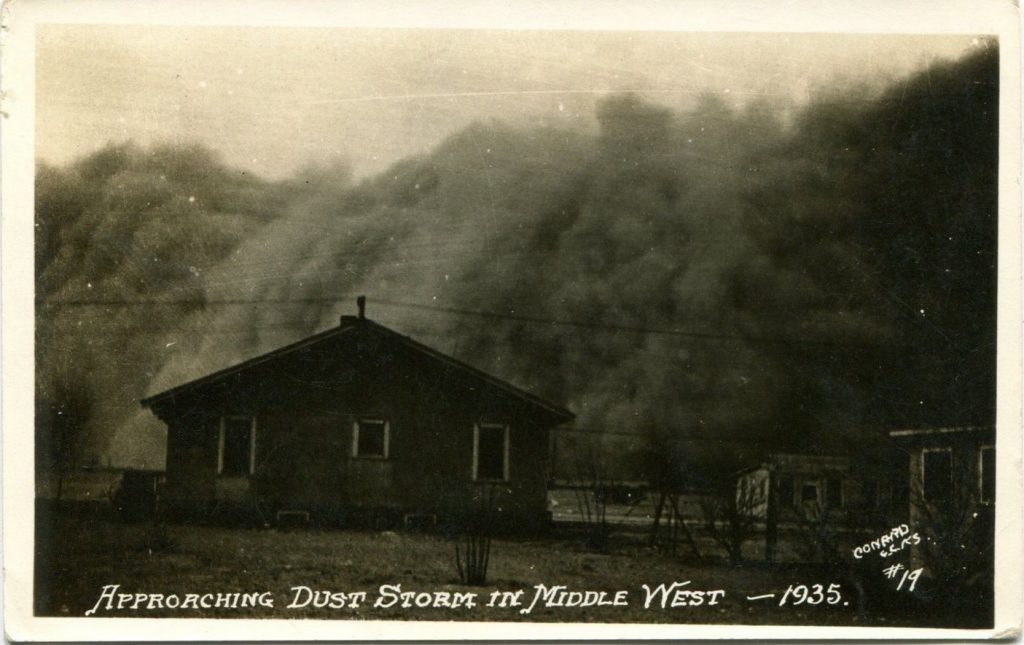 On the 14th day of April of 1935,
There struck the worst of dust storms that ever filled the sky.
You could see that dust storm comin’, the cloud looked deathlike black,
And through our mighty nation, it left a dreadful track.
From Oklahoma City to the Arizona line,
Dakota and Nebraska to the lazy Rio Grande,
It fell across our city like a curtain of black rolled down,
We thought it was our judgement, we thought it was our doom. 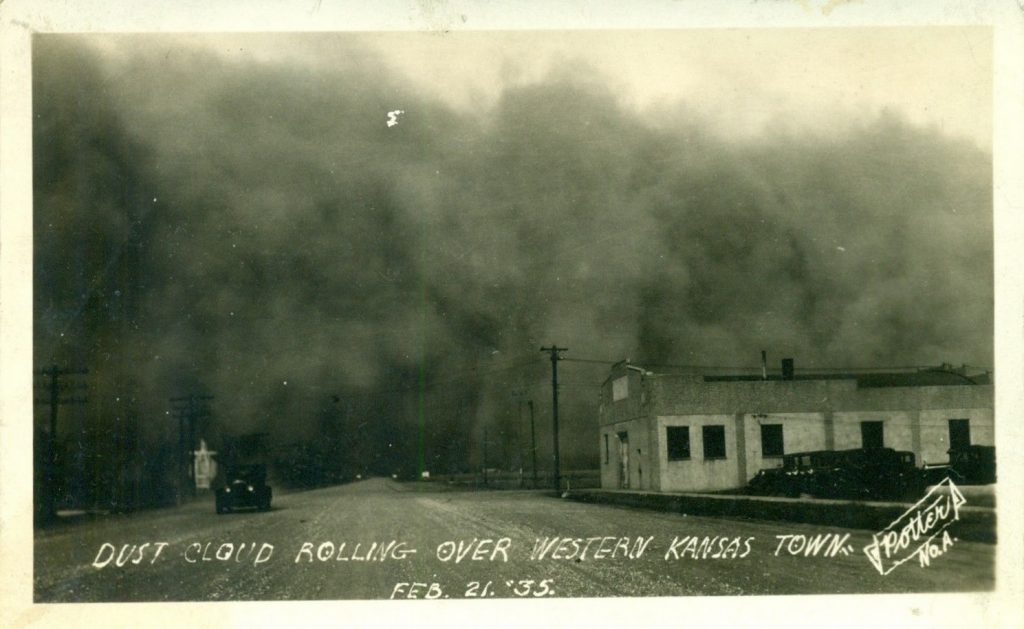 The term “Dust Bowl” became part of the American lexicon in April 1935. It was probably intended to be a “feels-like” adjective in a story that an Associated Press reporter, Robert L. Geiger wrote for the Lubbock, Texas, Evening Journal on the day after the worst dust storm in American history.

The storm blew-up in western Oklahoma early on a Sunday morning; dozens of accounts recall the difficulties people had getting home from church. About midday, a mountain of blackness swept across the plains west of Guyman, Oklahoma, and instantly turned a warm, sunny afternoon into a horrible blackness that was as dark as a moonless night. By early afternoon the storm started to move south and it did so at tremendous speeds – up to 60 miles in an hour. 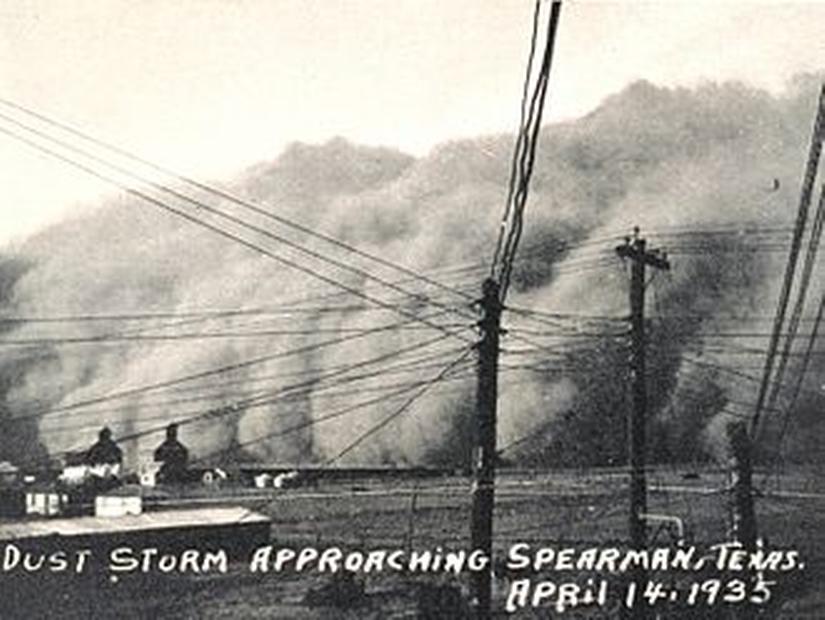 Perryton and Spearman, Texas, caught the brunt of the storm. Homes and businesses in those cities were covered, in some places, with sixteen feet of sand. It was not until after 7:30 PM that the winds finally laid down, more than seventy miles further south, near Amarillo, Texas. Miraculously, no fatalities were recorded.

However, the fact that no fatalities were recorded, did not mean that the dust wasn’t deadly. For more than a decade later those who lived through the storm and inhaled the dust suffered from shortness of breath, bronchitis, and various strains of influenza. One particularly ugly problem was something called dust pneumonia or as some people called it, “brown plague.” It was lethal to the extent that hundreds of people, particularly infants and the elderly died.

The misery and suffering of middle Americans in the early 1930s were the focus of many books, movies and documentaries. Many of the hardships were chronicled by Woody Guthrie, America’s best known singer-songwriter of the era who was later known as the “Dust Bowl Troubadour.” Woody traveled extensively at that time, often with the migrants who had so little, to new locales where the weather was better and employment was available. The most indigent finally came to everyone’s notice on April 15 when Geiger published his story of the storm, in which he dubbed the day, “Black Sunday.”

Guthrie’s attempts to bring the dust storm victims to the public’s attention were well intentioned, but the lore surrounding his actions and songs fell far short of telling the whole story. Contradicting the legend is the fact that many farm families never left their Dust Bowl homes. 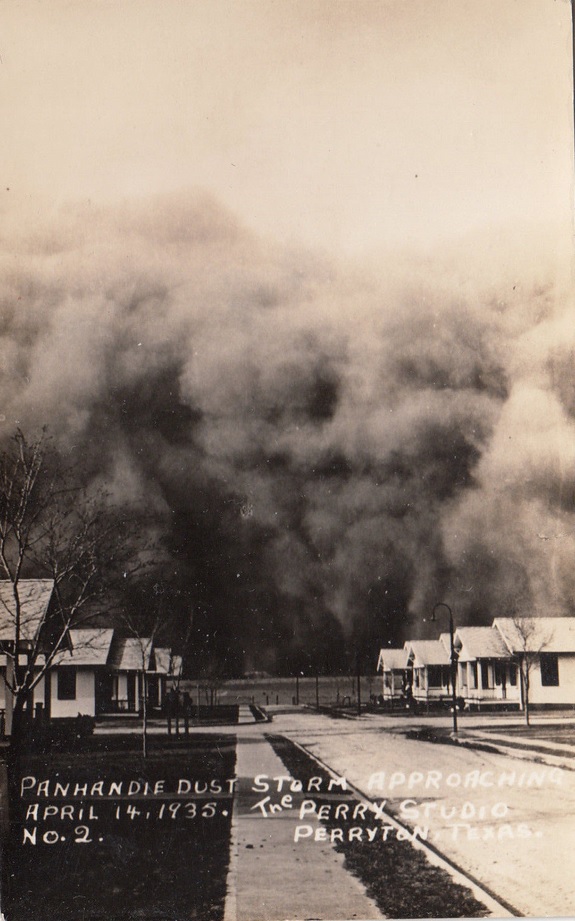 Guthrie was not alone in romancing the facts. John Steinbeck’s Pulitzer Prize-winning novel, The Grapes of Wrath, about migrating farmers also tends to obscure the fact that more than 70 percent of the farmers in the Dust Bowl stayed put. Dust Bowl refugees did not flood California. California was a dream, but an impossible one for those who wanted to move off the prairie but had insufficient money to make such a trek. The majority of those who did leave tended to move only to neighboring states.

Finally, late in 1935 after the massive damage caused by this and other sandstorms, Congress passed the Soil Conservation Act, which established the Soil Conservation Service (SCS) as a permanent agency of the U. S. Department of Agriculture. The soil service was created in an attempt to provide guidance for landowners and land users to reduce soil erosion, improve forest and field land, and conserve and develop natural resources.

In some rural parts of the country, the Soil Conservation Service played a more active role. They paid farmers to leave fields idle and employ land management techniques such as crop rotation or replanting of native prairie grasses. This practice (often spoken of as government intrusion) sparked considerable debate, but by the end of the decade the federal government had purchased over ten million acres and converted them to grasslands, some of which are, even today, managed by the U. S. Forest Service.

Postcards of “Black Sunday” are few; mostly RPPCs taken by chance and slapdash luck. Those that accompany this article were found in Minnesota.

The Staff of Postcard History offers this article for your enjoyment. It is a combined effort of many: our publisher, editor, webmaster and collectors/contributors far and wide. Please use the COMMENTS feature below to let us know how we're doing.
PrevPreviousPostcards Define the Indescribable
NextCecil S. Ashdown, Artist and “A-Dollar-a-Year Man”Next
3 Comments
Oldest
Newest Most Voted
Inline Feedbacks
View all comments
Ellen Richardson

It’s nice to hear “the rest of the story”.

Although I generally prefer color photography, the fact that the cards depicted are in black and white is most appropriate considering the literal and figurative darkness of the subject matter.