Imagine yourself a tourist in Paris in 1907. You are touring the world’s most vibrant city, but you feel an obligation to send word home to your loved-ones that you are safe and that you have seem some of the most glorious artwork ever created.

Do you send a postcard or write a letter? A world traveler sees wonderous sites that are truly and simply – indescribable. You will likely decide to send a postcard. And if I know you, the site you will think is the most indescribable will be … the Notre-Dame gargoyles. 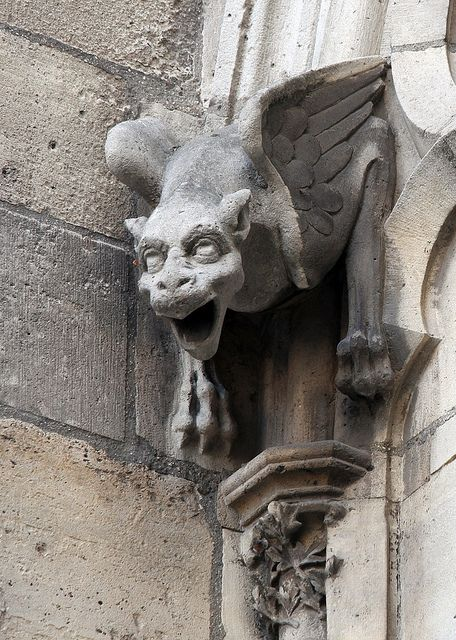 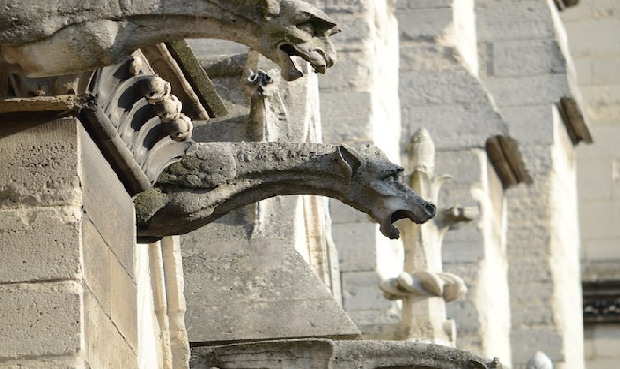 The twelfth century’s Bishop Maurice de Sully began the construction of Notre-Dame, Paris, around the 1160s and it lasted for nearly 200 years. At the start gargoyles were not a staple of French architecture, however by the middle of the 13th century, the Gothic style had gained in popularity and gargoyles were appearing nearly everywhere.

The first ones were copied from models found in the ancient temples of Egypt, Rome, and Greece. When the architects began adorning their designs with gargoyles it amounted to a re-imagining of French folkloric stories such as the 7th-century tale of Saint Romain and La Gargouille, a fire-breathing monster whose head was nailed to the eaves of a church to serve as a waterspout.

As the houses of worship grew larger so did the need for drainage systems. When paired with the increasingly superstitious nature of the contemporary Catholic church, this made gargoyles a perfect fit.

By the time Notre-Dame was finished in 1345, dozens of limestone gargoyles covered its exterior walls. Posing as both guardians and gutters, each creature had a distinctive appearance, consisting of a hollow, streamlined body, a long neck, and an expressive, animal-like head. Some had wings, prominent ears, and clawed limbs.

One medieval church historian studied and claimed in his book, The Gargoyles of Notre-Dame, that the necessity of stone gargoyles came about because the wooden ones worked so well they rotted away in just a few decades. The gargoyles were not enduring like the saints in wood or in stone. Therefore, the constant need for replacements fostered local artisans to become professional carvers.

They Lost Interest in Gargoyles, so Chimera were invented 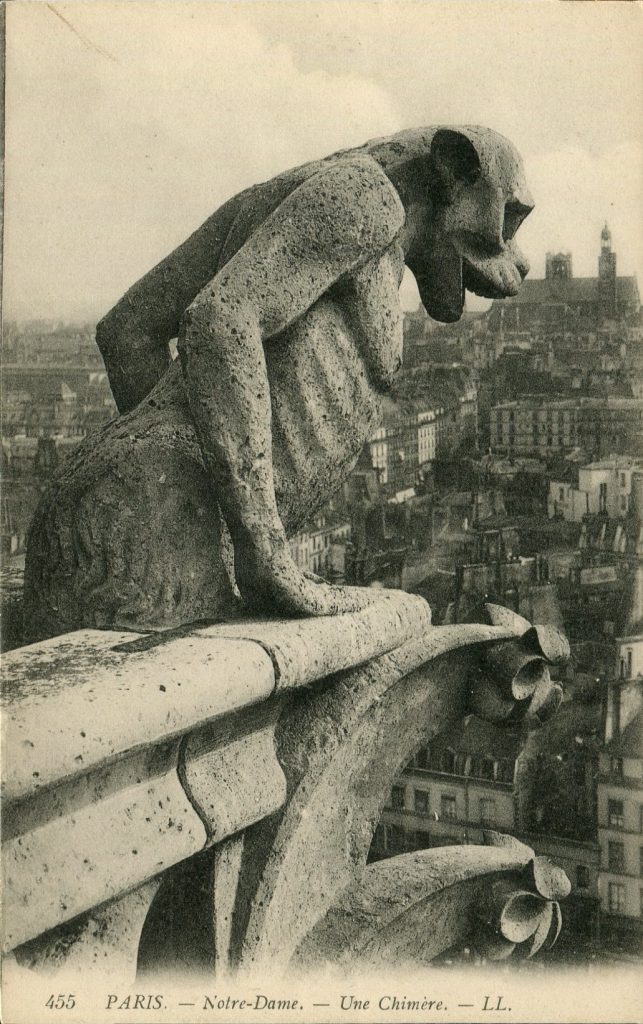 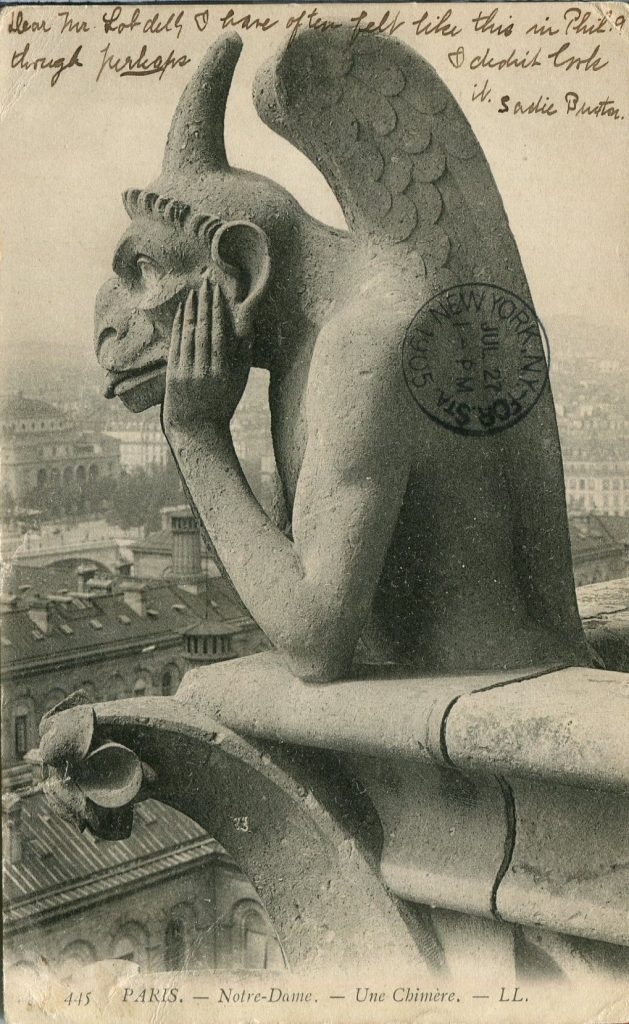 In the late 18th century, Notre-Dame was in crisis. The building was nearly 400 years old. Nature had not been kind and the Parisians were tired of the Gothic style and were embracing Baroque architecture. The parishioners all but petitioned for the crumbling cathedral’s demolition. With the gargoyles out of fashion, yet still necessary to drain away water from the roof, something new needed to be found. The solution came when in the early 1800s the first chimera were invented. They did reach acceptable levels of popularity with the public when the first ones sculpted were exhibited in the 1830s.

In 1844, architects Jean-Baptiste-Antoine Lassus and Eugène Viollet-le-Duc were commissioned to restore the aging cathedral. The duo employed a team of craftspeople who repaired existing features and added new elements, including a spire, some copper statues, and 56 chimera.

Unlike the gargoyles, the chimera do not protrude from the external walls. Instead, they line a gallery or balcony that connects the two bell towers. From here, they peer over the balustrade, where they eerily keep watch over the city and adorn the cathedral with their one-of-a-kind silhouettes.

The collection of chimera include frightening animals, fantastical hybrids, and mythical creatures. Some of which have been give fanciful nicknames throughout the years. Other famous, but unnamed characters include a one-horned demon, a goat-human hybrid, a plucky heron, and a not-so-scary elephant. 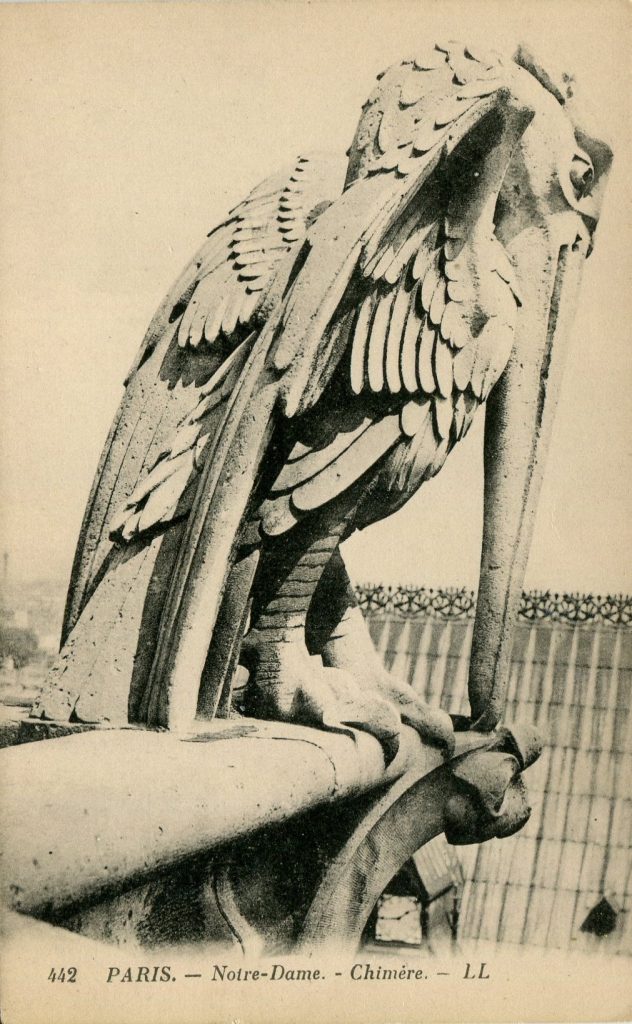 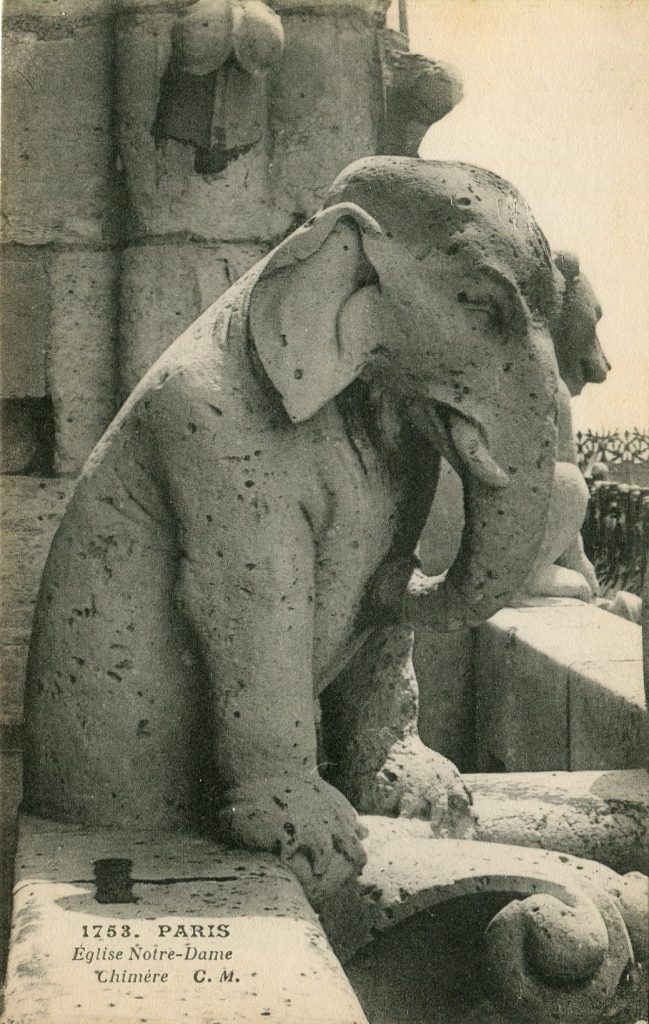 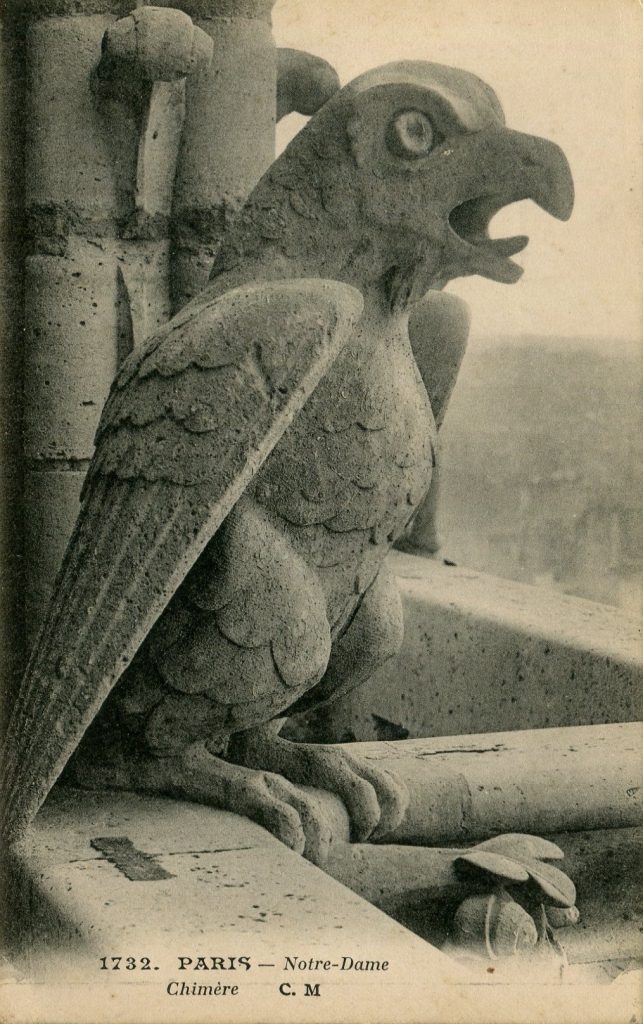 Since the fire on April 15, 2019, it is impossible to visit Notre-Dame Cathedral. It will be interesting to see to what extent the gargoyles and chimera are re-created. Until the fire both the looming gargoyles and the perched chimera could be best seen by the curious from stairs that ascended the towers from which it was permitted to walk across the gallery of chimera. While this climb comprised nearly 400 steps up two sets of spiral staircases, it was certainly worth the effort when you came face-to-face with Notre-Dame’s most famous residents.

Kaya Fellcheck is an optometrist by trade and has practiced her profession in England’s Lake District for nearly four decades. Soon to be retired, Kaya intends to come to America to visit the graves of Hollywood movie celebrities whose photos she has collected.
PrevPreviousWelcome to the Monkey House Enrico Caruso and the First Celebrity Trial of the 20th Century
Next“Black Sunday” and the 1935 Dust StormNext
6 Comments
Oldest
Newest Most Voted
Inline Feedbacks
View all comments
Mary Schaefer

The Denver airport has installed a fast-talking gargoyle to celebrate its 24th anniversary.
https://www.syfy.com/syfywire/interactive-chatting-gargoyle-at-denvers-airport

Hi Mary: Technically speaking that “thing” in Denver is a chimera, but who cares, it made me laugh.
Thank you, laughter is such a wonderful prescription these dire days.

absolutely fascinating. who could imagine that Notre Dame would be considered “old fashioned”? It just boggles the mind

These chimera made it into my NYC postcard collection. 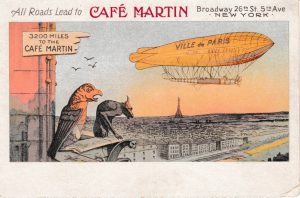 Those so-many-miles-to cards are a story in themselves. That’s a hint, readers.

I never realized there were so many different types of gargoyles at Notre Dame, and I didn’t know the church featured chimerae as well.