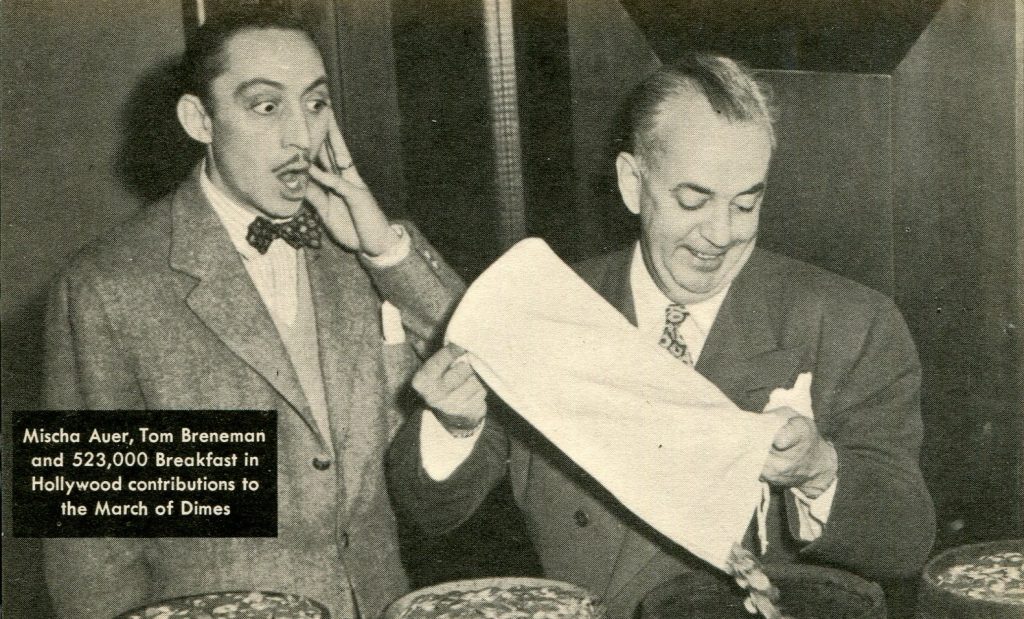 Listen to Tom Breneman’s Breakfast in Hollywood,
Monday through Friday Over the American Broadcasting Company

I had great fun researching this postcard. I found it some years ago in a “quarter-card” box. It came to my attention again, when I was sorting cards into a new album. The fact that I paid so little for this card did not deter me from paying many times twenty-five cents to claim that I owned the complete set. Let me explain.

First, I recognized Mischa Auer as an actor, but had no idea what his name was. I Googled him and found he is buried in Gloversville, New York, a city I know well, in a cemetery that I have visited on at least two occasions.

Second, I had heard the name Tom Breneman, but had no idea what he looked like. So, I Googled him too and found that his name was not Breneman, but Smith.  He was a very successful radio personality and had millions of listeners. His program was broadcast on four networks and very recognizable Hollywood personalities, such as W. C. Fields, Jimmy Durante, Andy Devine, and Orson Welles were frequent guests. The completely unscripted program had numerous sponsors, including Kellogg’s cereals, Ivory Soap, Planters Peanuts, Aunt Jemima, Minute Man Soups and Alpine Coffee. Breneman died unexpectedly in 1948 at the age of 46, but he is remembered with a star on the Hollywood Walk of Fame.

Third, Breakfast in Hollywood was a radio program that I knew about, for I think I remember hearing a broadcast or two when I was young. I think it was broadcast at 11 AM, on WFIL from Philadelphia.  Anyone know for sure?

Next, the National Foundation for Infantile Paralysis, commonly known as the March of Dimes was created by President Roosevelt in 1938 as a national organization devoted to helping victims of polio. Those who remember (or have studied) FDR know that he was our only president who suffered from polio, and by his efforts and with his generous support of medical research, a cure for the disease was discovered by Dr. Jonas Salk, albeit it came ten years after Mr. Roosevelt died.

It has been suggested that because of FDR’s death in April 1945 that the fund raising campaign for the March of Dimes that year was the most successful to that time. Millions of dollars ($18.9 M) were raised – this is a published fact, and as hard as it is to believe most of it was sent to the White House in the form of dimes, often taped to a piece of paper, through the U.S. Mail. I’m sure glad I never worked in the White House mailroom. However, other contributions and collections of dimes came from celebrity personalities, such as Eddie Cantor and Tom Breneman.

Breneman’s audience alone contributed over a half-million dimes in the course of the 1945 campaign. This postcard commemorates the generosity of the Breakfast in Hollywood audience and guests.  Published by Kellogg’s Company in 1945, the caption reads, “Mischa Auer, Tom Breneman and 523,000 Breakfast In Hollywood contributions to the March of Dimes.”

Here is where the fun begins.  The two guys in the picture look pretty relaxed as they dump dimes out of a bank-bag. It appears Breneman isn’t exerting any more effort than pouring a cup of coffee, but do you have any idea how heavy 523,000 dimes are?  Well, just for fun, I did some fancy arithmetic and learned the answer is an astonishing 46,334½ pounds.

Each card is a Breakfast in Hollywood photograph and the cards could be purchased at the studio. If you purchased the complete set, it came in a manila envelope with the Kellogg’s logo in the return address space. 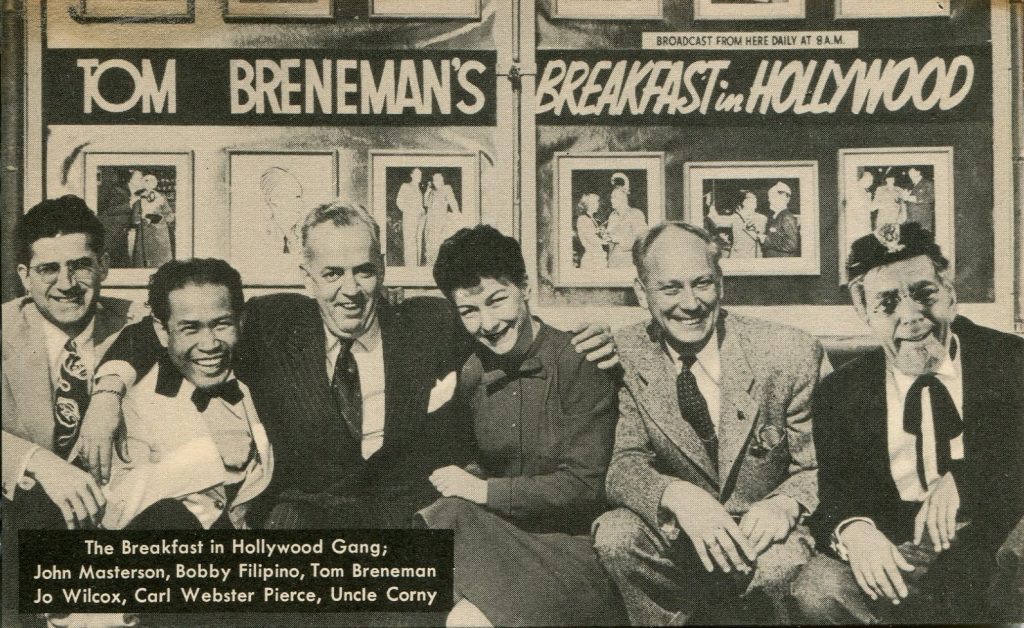 1. The Breakfast in Hollywood Gang 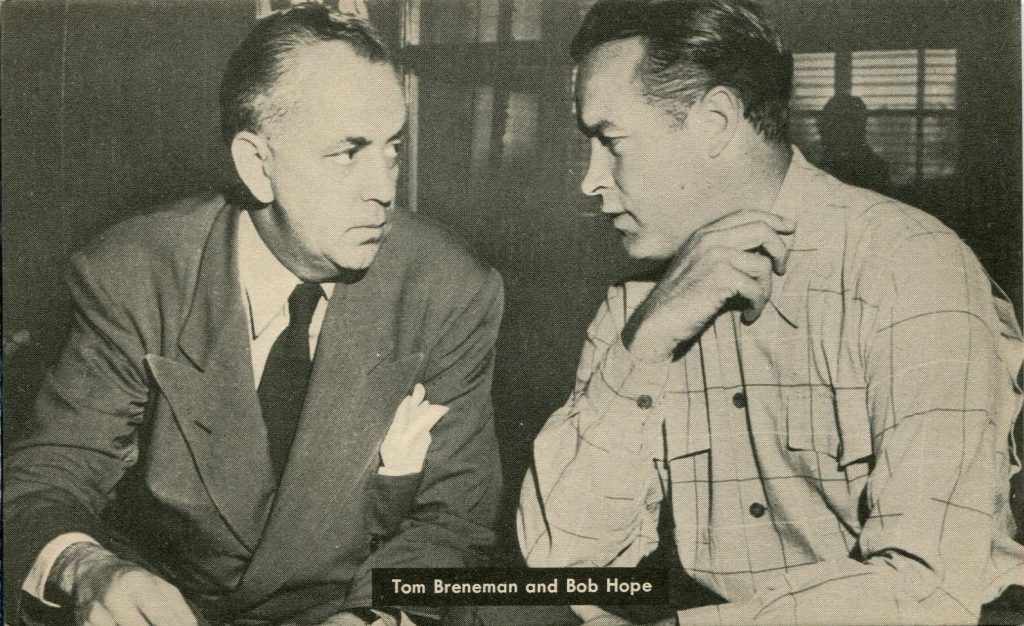 4. The Brenemans outside their Encino [California] home 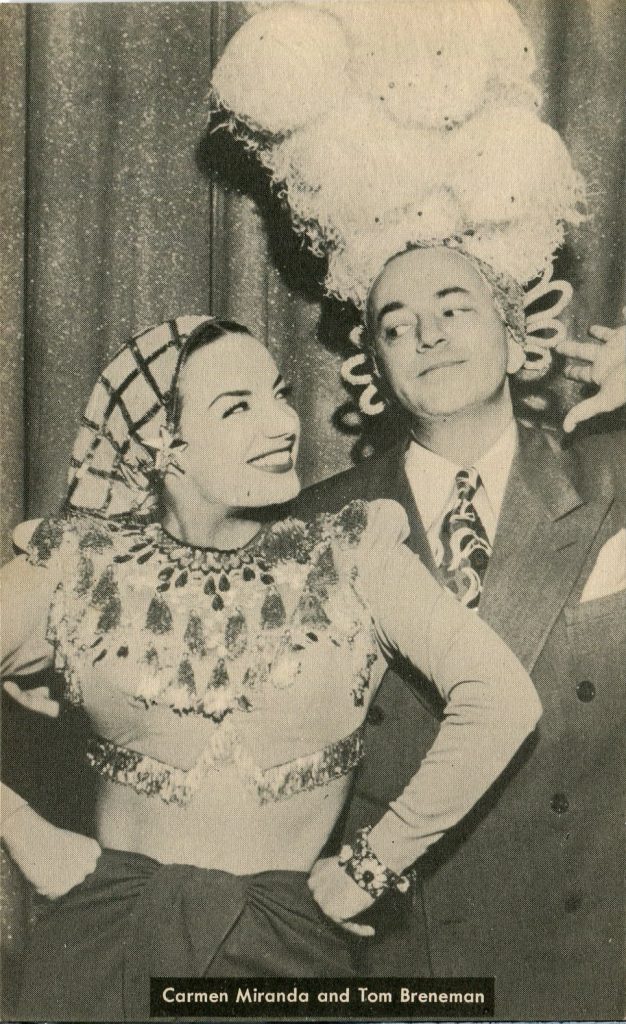 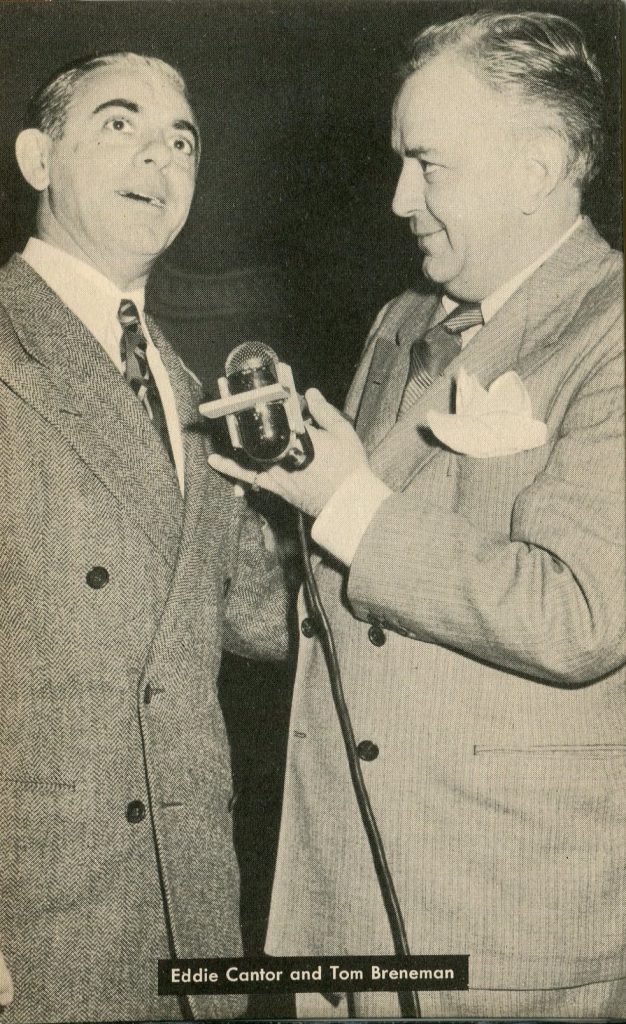 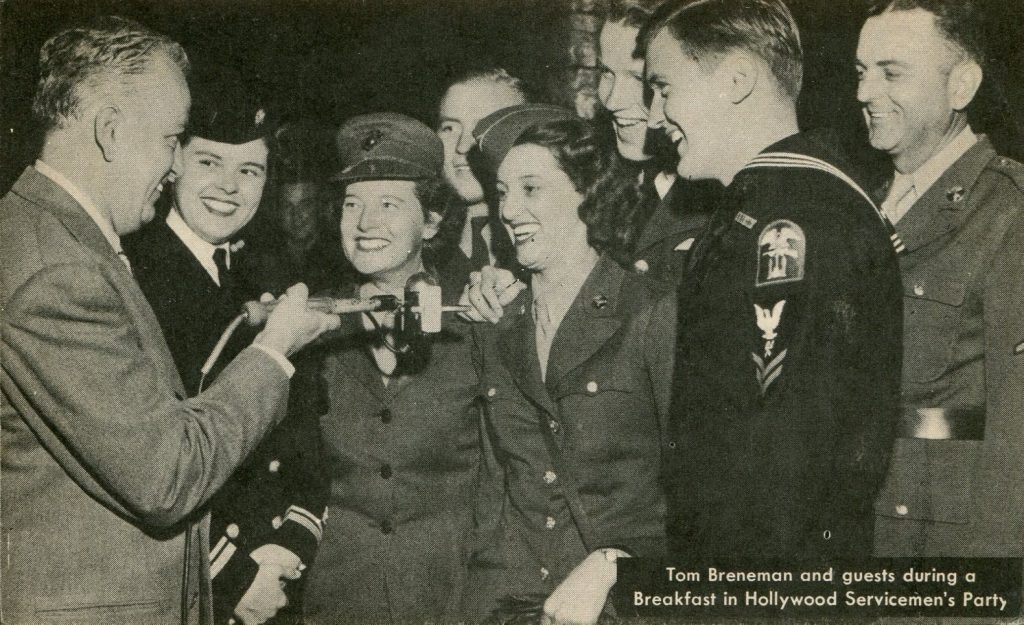 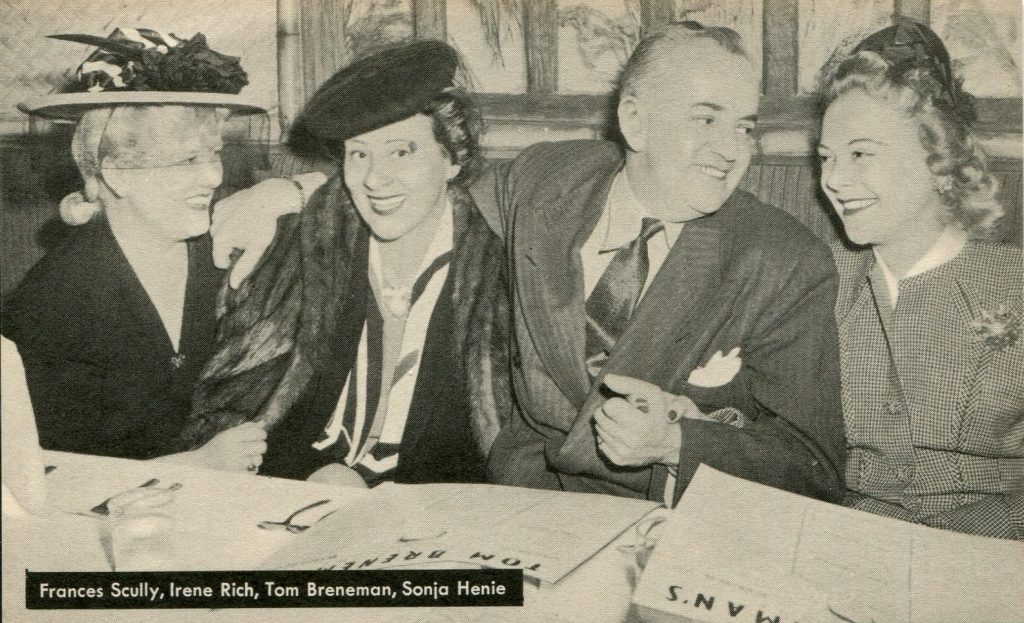 Listen to Tom and “Uncle Corny” during the broadcast below.

Ellie McCrackin is a pen-name used by one of America's foremost archivists. Preferring to remain in the background, Ellie ghost writes for some of the leading world historians. She loves postcards and loves to write about the stories they tell.
PrevPreviousOuthouse Humor What’s funny? What’s not?
NextPilot MountainNext
2 Comments
Oldest
Newest Most Voted
Inline Feedbacks
View all comments
Bonnie Wilpon

Love this article! I’ve had many Breakfast in Hollywood postcards over the years and never realized there was an actual set. Thanks for filling in some of my knowledge gaps!

Interesting article about a man I don’t recall hearing of before today. Obviously Tom Breneman is not to be confused with longtime Cincinnati Reds announcer Thom Brennaman!