In The Andy Griffith Show (an American situation comedy television show that aired on CBS from October 3, 1960, to April 1, 1968) the fictional town of Mayberry was based on Mount Airy, North Carolina. Mount Airy was the birthplace of actor Andy Griffith, but as Sheriff Andy Taylor he lived in Mayberry. He worked with his deputy Barney and lived with his Aunt Bee and son Opie. Pilot Mountain was often referred to on the show as Mount Pilot. The town of Pilot Mountain is ten miles southeast of Mount Airey, just off Route 52 in Surry County. 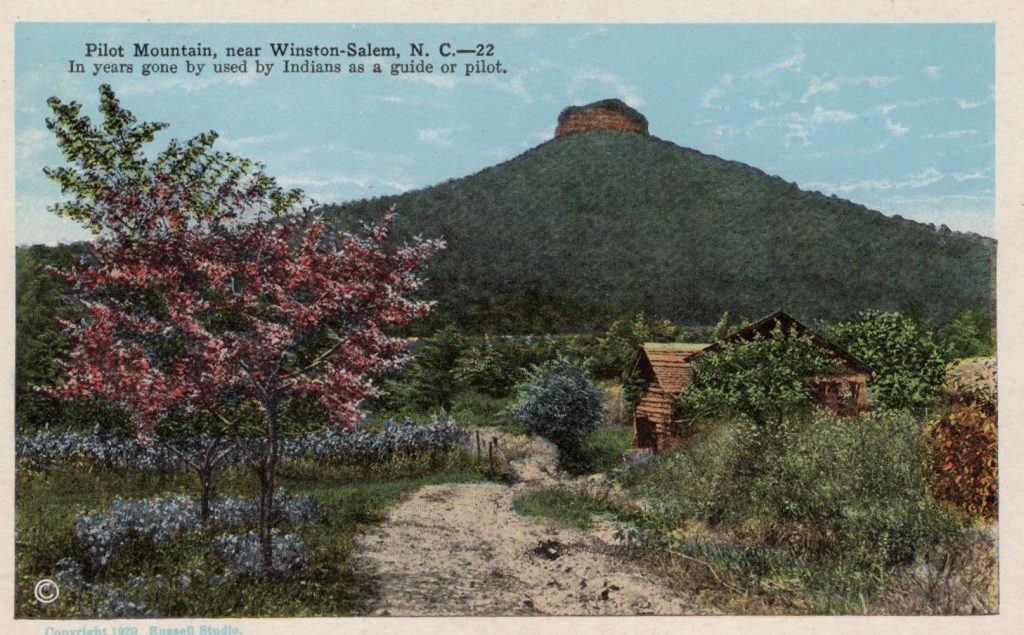 Obviously, the mountain gained fleeting notice in the 1960s, but its history reaches back to the ancient Sauratown Mountains. Named for the Saura Indians who inhabited the area first, they called the mountain Jomeokee – “Great Guide” or “Pilot.”  The Cherokee Indians eventually drove the Saura Indians out of the area.  The mountain knob guided both Indians and early European hunters along a north-south path through the area. 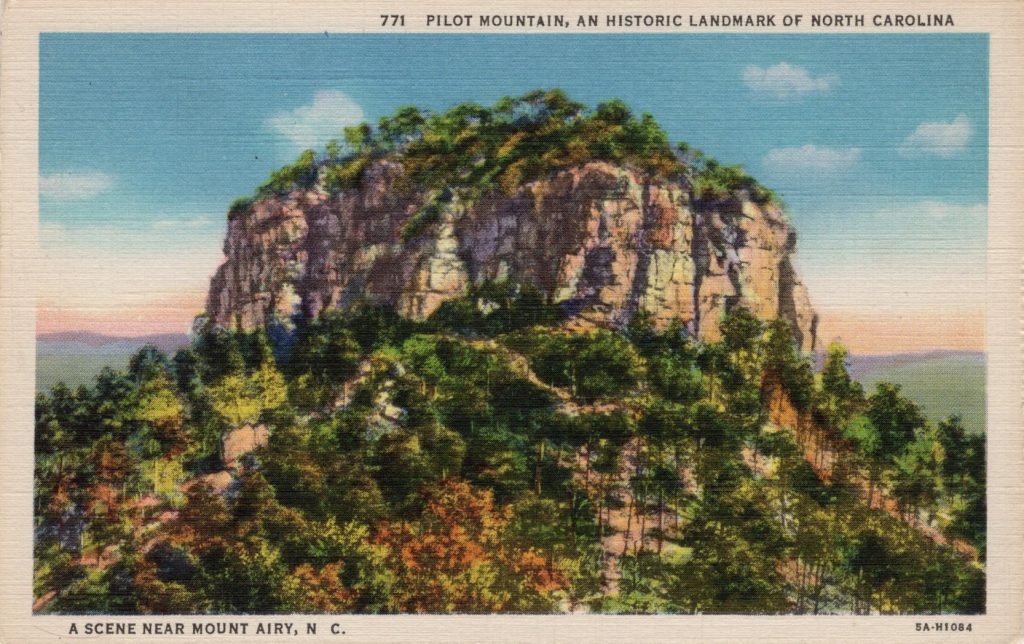 View of the “Big Pinnacle” by Asheville Postcard Company.

Even today driving down I-77 or U.S. Highway #52, one can’t miss seeing this amazing rock formation.  A quartzite monadnock (an isolated rock hill or knob that rises from a virtually level surrounding plain), this rugged mountain rock has survived for millions of years while the elements have eroded the surrounding area.

Big Pinnacle, as the prominent rock is known, stands 2,421 feet above sea level and is 1,400 feet above the valley floor. The mountain was first mapped in 1751 by Joshua Fry and Peter Jefferson, father of President Thomas Jefferson.

Pilot Mountain became a North Carolina state park in 1968, due to efforts by local citizens. Prior to that time, the mountain was a commercial tourist attraction.

The Pilot Mountain Park, as a state park, protects the surrounding area from further commercial development. Working with the conservation-minded owner of the property, Mrs. J. W. Beasley, the group secured options on the land and raised matching funds that made it possible to purchase the land with federal grants. Additionally, the committee acquired more than 1,000 acres of land along the Yadkin River to be added to the park in 1970. Also, more acreage was later acquired that increased the park to 3,703 acres.

Today the town of Pilot Mountain, three miles from the Pilot Mountain State Park has fewer than 1,300 residents. The history of the town is rooted deep in the 19th century. Located near the border between Stokes and Surry counties it was first known as Little Yadkin, but that changed in 1852.

Pilot Mountain Park as it stands today is a monument to the North Carolina citizens dedicated to preserving natural resources in their state.

I knew Griffith was actually from Mount Airy, and discovered when I visited the town that it has (or at least had at the time) a shopping center known as Mayberry Mall.

My Great Grandparents lived on the mountain road and we would drive up to see my Great Grandma Reynolds on Sunday and I would spend a week with her and my Great Aunt Nannie Reynolds Eaton in the Summer time. We were told that was Grandma’s Mountain and I didn’t understand why she charged us a dollar to go on the Mountain! My Great Grandpa Sidney Reynolds was the postmaster in Pinnacle and ran the General Store. He died before I was born but I was told what a great man he was. My memories of my youth being up… Read more »